This state is hoppin’. It’s got old-fashioned southern charm and modern business sense. And with its sports teams, historic sites, art scene and foodie culture (mmm, barbecue), North Carolina’s got something for everyone.

Whether you want to live in a cutting-edge city or you’re looking for a small town to raise your family in, we’ll show you nine of the best places to live in North Carolina.

First, let’s clear something up: What makes a city the best place to live depends on what you’re looking for. So be sure to think about what you need and want in a new city.

The great thing is, North Carolina’s got three unique geographic areas: the mountains, coastal plains and Piedmont. So if you love the beach, enjoy fresh mountain air, or want the best of both worlds, you can narrow down your search pretty easily.

All of that sounding good? We know—it’s a tough choice! We’ll help you compare the top places to live in North Carolina so you can better decide what’s right for you. 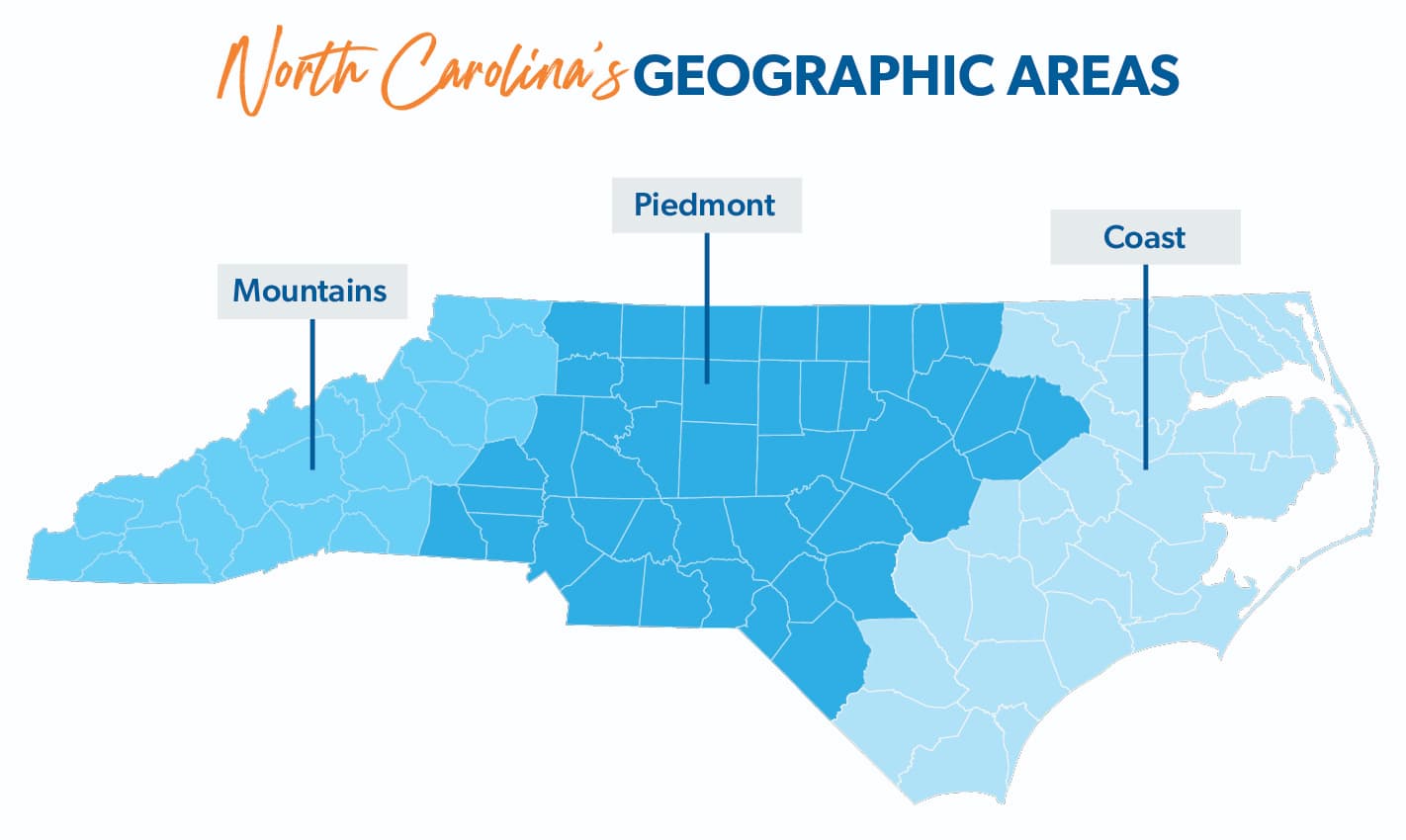 The state capital is the place to be for professionals and people who want to change the world. It’s the second-highest paying city on our list and it’s part of The Triangle, three cities that are famous for scientific research. It’s a growing tech hub—even Apple is moving in.1 And the economy survived the pandemic in surprisingly good shape.2

Find expert agents to help you buy your home in North Carolina.

Raleigh has awesome food, art and music scenes. So you can get dinner with friends, hit up a local gallery, and then hop over to a music festival for some rock, bluegrass or even opera. You can also catch a pro hockey game or check out the local museums. (That’ll take a while—there are tons of them.) Or visit the Historic Oakwood neighborhood to take in Raleigh’s natural beauty and history.

Some of the best places to live in North Carolina for families are near Raleigh, like the suburbs of Morrisville and Cary. They’ll put you in commuting distance of downtown while giving you a smaller town feel. The downside to Raleigh? High housing prices! This city has the highest rent on our list (womp, womp). And home prices can be pretty steep too.

The Queen City was named after a British queen consort who reigned back when Charlotte was built in 1768. And it’s just as classy as its namesake. Charlotte has stunning natural scenery, like Lake Norman, and vibrant neighborhoods. (Just don’t confuse Downtown and Uptown—it makes the locals mad.)

With so many unique neighborhoods, you’re sure to find one that’s a great fit for you—and your family. Locals have rated Ballantyne East, Ballantyne West and Providence Crossing some of the best places to live in North Carolina for families.

And don’t let Charlotte’s old-world charm fool you! The biggest city on our list is home to 10 companies on the Fortune 1000 list.8 And it’s got a killer craft beer scene to go with its pro sports teams, the Carolina Panthers and Charlotte Hornets. Don’t like organized sports? The U.S. National Whitewater Center is in Charlotte—and it doesn’t get any less organized than zipping down a river in a rubber raft!

The second point in The Triangle, Chapel Hill is smaller than Raleigh or Charlotte. You might enjoy its small city vibes—and you can definitely enjoy the fact that it’s got the highest yearly income!

Chapel Hill is considered one of the best college towns in the country.14 And it’s a great place to raise a family. Author William Meade Prince called this town “The Southern Part of Heaven” because he loved growing up there.

One heavenly thing about Chapel Hill: It’s environmentally friendly! With so many public transit systems, bike paths and greenways, only about half of residents drive their own cars to work.15 Plus, you can enjoy breathtaking seasonal scenery thanks to the city’s many arboretums and gardens.

Winston-Salem started as two towns that later became one. Both towns had a long history in the tobacco industry, but these days, Winston-Salem is known for healthier things.

The city is home to sites like the West End Historic District and Historic Bethabara Park, as well as museums—like its children’s museum, art museums and Winston Cup museum (we see you, NASCAR fans).

Another thing you may enjoy? Affordable housing! The median home price in Winston-Salem is $103,000 lower than the national median price.21 You’ll also see lower rents than in the big cities. And Winston-Salem is in the western Piedmont . . . close to those beautiful Carolina mountains.

Like Winston-Salem, Durham started in the tobacco industry. But now it’s better known as the third point of The Triangle, and its biggest employers are banks and medical companies. Much of Durham’s medical system belongs to Duke University. Duke also runs family-friendly nature centers like Duke Forest and Duke Lemur Center, which helps save endangered animals.

Now, you may notice Durham’s population and housing prices are the same as Chapel Hill’s. That’s because these cities are part of the same statistical area. But while the cost of housing is similar, salaries tend to be lower in Durham. That may affect whether you look for a job in the city or commute to a nearby town that pays better.

Any of these cities catching your eye? Before you pack your bags, get our free relocation guide so you can be prepared for your next big move.

Located in southeast North Carolina, Wilmington is right by the Atlantic Ocean and Outer Banks. (Visit these islands, and you just might see some wild horses!) It also boasts the Cape Fear Riverwalk, so you can enjoy the water while keeping dry land under your feet.

Like most North Carolinians, people in Wilmington value history. This city has several colonial sites, and World War II buffs can climb aboard the U.S.S. North Carolina battleship. Or for a modern take on the town, visit the aquarium, beach boardwalks and locally owned shops and restaurants. If you’re lucky, you may even stumble onto a movie set.

The downside to beachside living is you’ll pay beachside prices. Wilmington has the second most expensive homes on our list—and the third lowest income. If you’re moving here, figure out exactly how much house you can afford before you take the plunge. Oh, and pack a raincoat—Wilmington is the rainiest city in our countdown!

We already named Asheville one of our top cities to retire to, so it’s no wonder it’s also one of the best places to live in North Carolina!

Asheville sits high up in the Blue Ridge Mountains, so outdoor enthusiasts can enjoy waterfalls, hiking trails and wildlife. There’s a wild art scene too. You’ll find dozens of studios and galleries, especially in the River Arts District. You can also visit Asheville’s 100-plus craft breweries (just not all at once).

Of course, mountain towns are like beach towns: expensive! Asheville has the highest home prices on our list. But the median income is well below the national average.37 So you’ll want to check your budget carefully before moving here.

Hickory is one of the best places to live in North Carolina for families. It’s a three-time All-America City.43 And even though it’s next to the Blue Ridge Mountains, Hickory has some of the lowest housing prices on our countdown.

It’s also one of the smallest towns on our list: The metro population covers three whole counties, so there’s still plenty of undeveloped land if you want space. It’s also pretty quiet . . . except on race night!

This river town is home to the famous Hickory Motor Speedway, where NASCAR legends like Richard Petty and Dale Earnhardt learned how to race. (Bonus: Since NASCAR started with bootleggers running moonshine, you can sample the brew here.)

***This number comes from 2015–2019 census data, so it’s not as up-to-date as other rent prices in our list. Rents in Hickory have likely gone up since 2019. But based on current population and home price data, it’s still likely cheaper than renting in a bigger city.

High Point’s motto is “Make yourself at home” . . . which may be why the city has over 100 furniture stores! (Fun fact: It’s also home to the world’s largest chest of drawers.)49

Like most North Carolinians, the people of High Point love food and sports. You can enjoy local restaurants—including some dog-friendly ones—and catch a pro baseball game. Or tour the city’s museums to learn about its history in jazz and the Underground Railroad.

While High Point is in the Piedmont, it’s a smaller metro area with the lowest housing costs in our countdown. High Point is also smack in the middle of North Carolina—putting you in easy driving distance of the beach and mountains. So if you’re looking for a great location on a budget, High Point could be for you!

Ready to Move to North Carolina?

Awesome! North Carolina is a great place to live. And the great people at PODS Moving & Storage can make that move less stressful with a variety of container sizes to fit your needs and flexible pickup options that work with your schedule. Basically, PODS puts your move in your hands.

Whether you’re coming with your PODS container from another state or you already call North Carolina home and you’re just switching towns, you need an expert real estate agent to help you make the move. We recommend partnering with an Endorsed Local Provider (ELP). These top-performing real estate agents can help you find the best place to live in North Carolina for you. From finding a great neighborhood for your family to picking the perfect house (or helping sell your old one), they’ll walk you through the whole process. And these guys and gals are RamseyTrusted—so they’ll put serving ahead of selling.

Ready to get started? Connect with a RamseyTrusted ELP today! 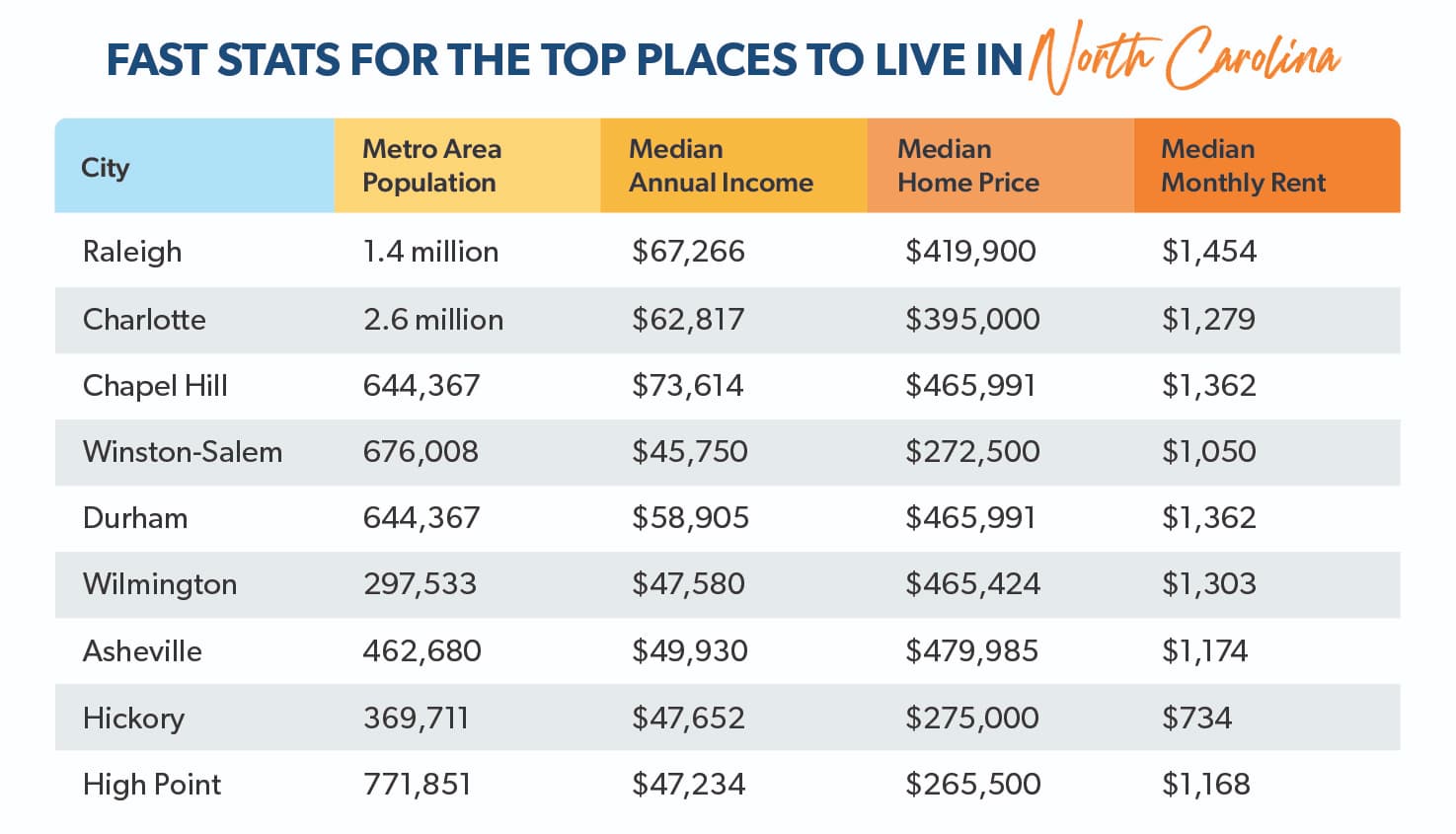 Making a move to North Carolina?

Connect with some of the best real estate agents North Carolina has to offer and find your dream home.
Find a Local Agent

Connect with some of the best real estate agents North Carolina has to offer and find your dream home.
Show Me Local Agents