If you’re in the middle of paying off your credit cards, car loans or student loans, you know that every extra dollar toward debt helps. But if you’re starting to consider your retirement fund as a way to dig yourself out of the hole, hold up!

While it may be tempting, taking money out of an IRA to pay off debt is a terrible idea. Not only can that money come with outrageous early withdrawal penalties and taxes, but it’s also stealing from your future self. We’ve broken down what happens when you cash out a retirement fund early, and we’ll tell you how you can pay off debt without raiding your IRA.

What Are the Rules and Penalties for Early IRA Withdrawal?

Whether you pronounce it eye-ruh or you sound out each letter, an IRA (Individual Retirement Account) is a great tool to build wealth and make sure you retire with dignity. But the key word here is retire. Dave Ramsey says you shouldn’t take money out of your IRA early unless it’s to avoid bankruptcy or foreclosure. Why? Because using your retirement fund for anything other than retirement can come at a big cost.

Money taken out of an IRA early (before the age of 59 ½) must be transferred to another retirement account within 60 days to be considered a “nontaxable rollover.” We repeat: 60 days! Otherwise, the government will take its cut in the form of penalties and taxes. So, if you withdraw money from your 401(k) because you’re changing jobs and want to move it to a new company, make sure you do it within the 60-day period. That way you won’t lose any of your savings. After all, it’s your hard-earned money, and you deserve to hold onto as much of it as possible. Also, keep in mind that nontaxable rollovers can only be done once every 12 months.

As soon as those 60 days are up, the money from the IRA is considered to be cashed out. And the penalties and taxes you have to pay on that money depend on the type of retirement account it came from: 401(k), traditional IRA or Roth IRA.

Withdrawing money from a 401(k) early comes with a 10% penalty. You also have to pay taxes on whatever you take out, but the IRS usually withholds 20% automatically. And if you take out a significant amount, it could bump you into a higher tax bracket. So, if you took $20,000 from your 401(k) and that puts you in the 22% tax bracket, you may only get about $12,000–13,000 (depending on state income tax) when all is said and done.

And because 401(k)s are funded with before-tax dollars, you’ll still have to pay taxes on anything you take out, even after the age of 59 ½. But there are some exceptions to paying penalties on early 401(k) withdrawals, which we’ll discuss later.

But if you’re thinking about taking money out of your 401(k) to cover an expense or pay off debt, ask yourself this: Do I really want to borrow money at 30% interest? Of course not! Sometimes it just takes doing the math to realize what you’d actually lose.

Taking money out of a traditional IRA before 59 ½ also results in a 10% penalty. There’s no automatic withholding, but you still have to pay federal and state income tax on the amount you took out when it’s time to file your taxes.

Like a 401(k), there are some exceptions to the early withdrawal penalty for traditional IRAs (We’ll dive into those in a minute.). But even if you can take money out of your IRA, it doesn’t mean you should. Instead of having to pay 30% to the government, you could contribute regularly to a savings account and use 100% of that money toward expenses you know are coming, like helping your kids pay for college or buying a house. Don’t rob your future self just because it’s easy right now.

Since a Roth IRA uses after-tax dollars but grows tax-free (one of the reasons why we love it so much), you’re able to pull out any of your contributions, regardless of your age and without penalties or taxes. But if you want to take out any earnings (aka any growth from compound interest), you have to be at least 59 ½ and the Roth IRA itself has to be at least five years old. Otherwise, you must pay the 10% early withdrawal fee, plus any taxes.

But the whole point of investing in a Roth IRA is that you won’t have to pay taxes when you withdraw the money in retirement. You already paid taxes on the money you’re putting in there, so why would you want to pay more by taking money out too soon? We think you should take full advantage of a Roth IRA—and the best way to do that is to leave it alone until you retire.

Exceptions to the Early Withdrawal Penalty

While you still have to pay taxes on any money taken out of a 401(k) or IRA before a certain age, there are some circumstances that would let you get around the 10% early withdrawal penalty for retirement funds.

Exceptions for Both 401(k) and IRA

There’s also an exception to the early withdrawal penalty for a 401(k) if you receive a “hardship distribution.” This is money taken out of your 401(k) to meet an “immediate and heavy financial need,” according to the IRS, and could include things like repairing damage to your home after a natural disaster, covering funeral expenses for a loved one, or paying rent to avoid eviction. And you’re only allowed to take out the exact amount needed for these expenses.

But even as it becomes easier to access your 401(k), remember that you’re the one who has to live off that money when you retire. So be careful about what you call an emergency and save your 401(k) for later.

Exceptions for IRA Only

If you are in a situation where you need the money in your IRA to help you avoid bankruptcy or foreclosure, connect with a SmartVestor Pro.

Another mistake people make is taking out a 401(k) loan to pay off their debt—but you end up having to pay yourself back with interest. Yuck! And 401(k) loans can backfire quickly. If you lose your job, that loan needs to be paid back within 60 days. If it’s not, you’ll be forced to pay—you guessed it—a 10% penalty, plus taxes. But the truth is, you can’t borrow your way out of debt, so you should avoid loans altogether.

What Is the Long-Term Cost of Early Withdrawal?

Ever heard the old proverb, “Let the sleeping IRA lie”? No? Just us? The purpose of retirement funds is to make sure you’re taken care of once the income stops rolling in. But too many people treat their retirement fund as their emergency fund. And the more money you take out now, the less you’ll have for those beach-vacationing, golf-playing, grandkid-visiting days of retirement that you dream of.

When your IRA becomes an ATM, you lose out on all the money you would have earned with compound interest. Compound interest is your best friend, but only when you give it the opportunity to work. (Try our compound interest calculator that will do the calculations for you.) That’s what we call free money to those who wait. It’s not money for today; it’s money for tomorrow. You’re in it for the long haul, and investing takes a decent amount of patience and self-control. 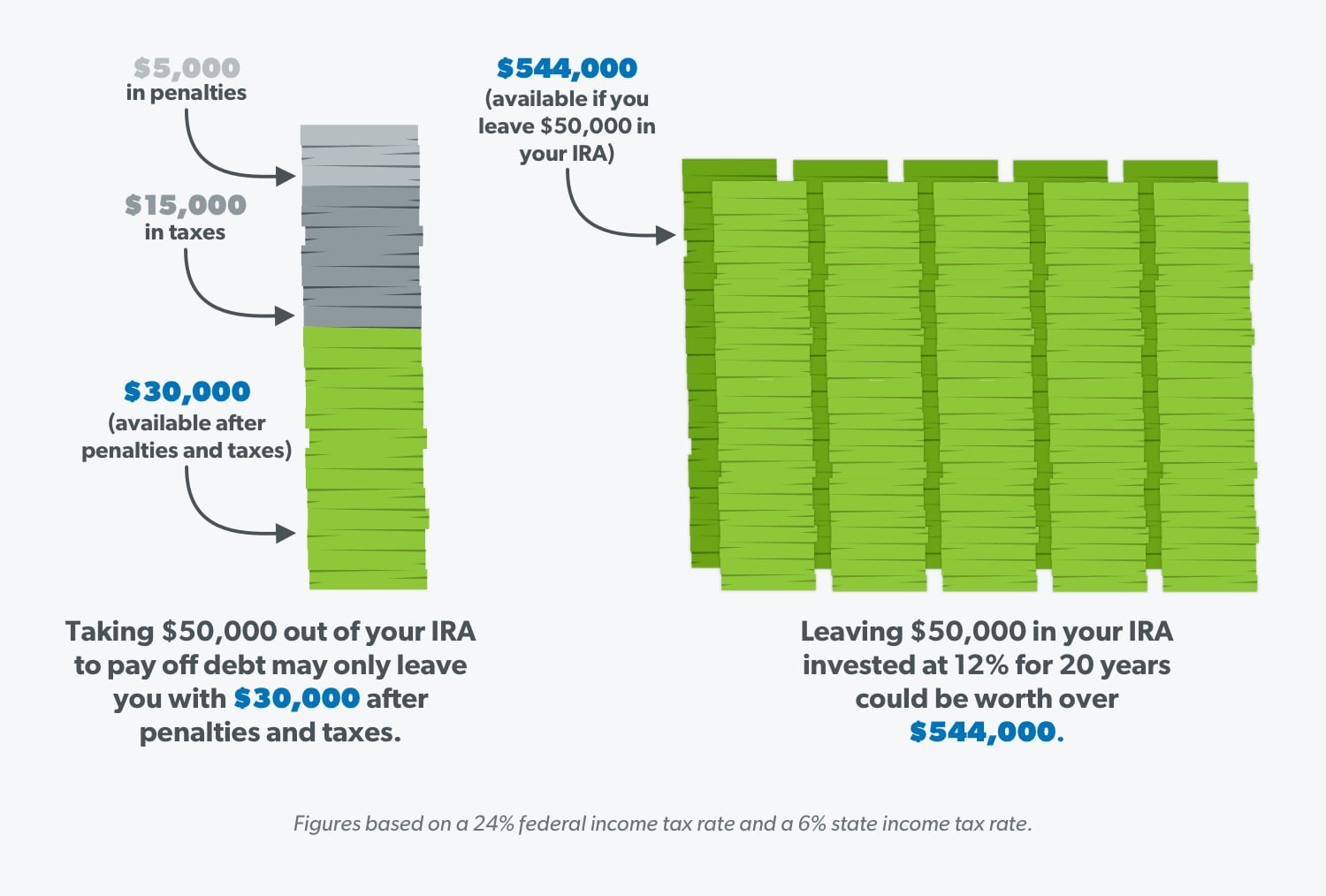 Use our investment calculator to see what your IRA will be worth when it’s time for you to retire.

The long-term cost of looting your retirement fund is simply not worth it. Many people say they can make up for the loss by putting more money in their IRA later, but there are limits to how much you can contribute each year.

We know you work hard, and the last thing you want is to have to work harder and longer because you didn’t save enough for retirement. Don’t be like the 90% of millennials who took money out of their retirement accounts and regretted it.1 Leave your IRA alone, and when the time comes to use it, you’ll be so glad you did!

What Are Some Other Options to Pay Off Debt?

So if you don’t cash out your retirement fund, how do you pay off your debt? We’re glad you asked! Here are some tried and true methods for knocking out debt that your future self won’t regret.

Taking control of your money starts with having a written plan—a budget. And a budgeting tool like EveryDollar forces you to be more intentional with the money you have now, instead of wondering where it went later. Giving every dollar a job to do also helps you build a solid emergency fund so you won’t be tempted to tap into your IRA when life throws you a curveball.

The debt snowball method is the fastest way to pay off debt because it gives you money wins that motivate you along the way. Here’s what you do: List all your debts smallest to largest (regardless of interest rate) and attack the smallest amount with a vengeance while putting minimum payments on the rest. Once the smallest debt is gone, take that payment and apply it to the next-smallest debt. Then use that budget we mentioned to cut back on your spending and throw even more money at your debt. When that snowball starts rolling, it’ll give you the momentum you need to get out of debt for good!

If you still feel like borrowing from your retirement fund is your only hope, you might just need someone to talk you through your options. A Ramsey Solutions Master Financial Coach can encourage you and help you make the best decision for your financial situation. Find a coach near you today.

If you really want to make sure your retirement dreams become a reality, take Financial Peace University. In this nine-lesson course, you’ll learn all you need to know about paying off debt, saving money and investing wisely so you can build lasting wealth. It’s never too late to change your money habits and set yourself up for a successful future!