Enter our giveaway for a chance to win cash!

If you’re burdened by student loan debt, you’re not alone. People in our country have dug themselves into $1.48 trillion of debt for college.1 And many of them wonder how long it will take to pay off their student loans.

Sending in an average monthly payment of $393 is annoying at best, and totally defeating at worst.2 It makes you feel like you just can’t get ahead. There’s no doubt student loans are stealing your security and your future—which is ironic, because continuing your education was supposed to make all your dreams come true, right?

But as stressful as your student loans may be, I want you to know there is a way out. You don’t have to end up among the one in 10 Americans who can’t pay their student loans.3 You can totally pay off your debt faster and avoid being another sad statistic!

How Long Does It Really Take to Pay Off Student Loans?

A typical student loan is structured to take 10 years to pay off. But research has shown it actually takes 21 years, on average.4 So, when you’re just out of college and expecting to be out of debt by the time you’re 32, the reality is that Sallie Mae could follow you well into your 40s! The good news is, if you’re motivated, you can beat those odds.

The last factor is the one you can control starting today. You’ll just need to get intense about cutting back your lifestyle and making money like crazy. Adding more income isn’t rocket science, but it’ll take sacrifice and effort.

You can pay off debt faster! Get started with a FREE trial of Ramsey+. 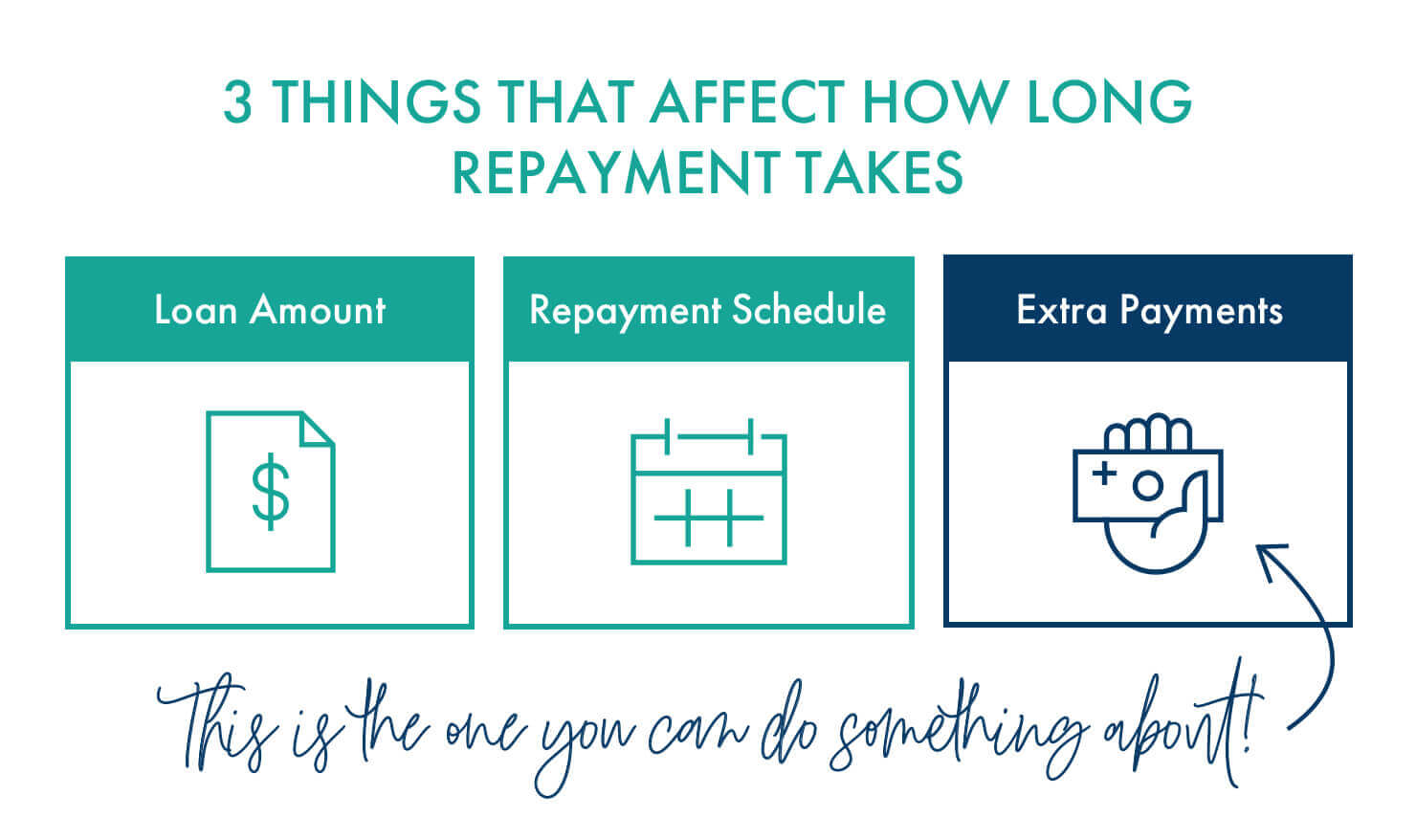 How to Pay Off Student Loans Fast

You can pay off your debt faster than ever before. The methods below are tried and true, and I’ve seen them work for thousands of people. Here are three ways to repay your student loans:

This one’s easy! Most of us have way too much stuff—clothes, video games, DVDs, purses, maybe even an extra piece of furniture we don’t need. Pro tip: Baby stuff sells like hot cakes! Throw some of that stuff you don’t use anymore on Craigslist or Facebook Marketplace.

Set up an online photo album and include the price of each item. You can make pretty good money just by selling your unwanted junk. Then, put all of that money toward getting out of debt.

I know what you’re thinking: Doing one job is hard enough—whether that job is in an office or taking care of the kids at home. So how am I supposed to take a second one without losing my mind?

Just know that this is a season. It’s temporary. It’ll be uncomfortable for a little while, but the goal is to make as much money as you can as quickly as possible.

How many pizzas would you have to deliver to pay double on your student loan payment this month? What about housesitting, driving for Uber or Lyft, babysitting, teaching English online, mowing yards, or selling stuff on eBay or Etsy? You’re only limited by your imagination here. And remember, when you’re trying to get out of debt, nothing is “beneath” you.

If you don’t want to be in debt forever, you’ve got to get serious about paying off your student loans. You need to attack that debt like your life depends on it! It’ll require short-term sacrifice, for sure, but your life will feel so much less stressful in the long run! If you get intense and passionate about getting out of debt, everything else will take care of itself. (The debt snowball works! Here’s why.)

The real question I want you to be asking is, “How long does it take to pay off student loan debt when you’re motivated?” The answer is yours to write.

Because the reality is we’ve been lied to for years by the student loan industry, and it’s time to hear the truth! The student loan crisis is impacting you, your friends, your kids and our economy. And the best way to fight back is to get mad and stop giving them your hard-earned money!

There’s no better time than right now. The sooner you begin, the greater the impact becoming debt-free will have on your life in the long run.

Use these tips or come up with a few of your own. But whatever you do, commit to getting out of debt. Your past doesn’t have to dictate your future, and when you eliminate your debt, you’ll get your life back.

If you really don’t think you can find extra money to throw at student loans, I see you. But I want you to take my 14-Day Money Finder challenge and just see what happens. The average person finds $2,000 for the year!