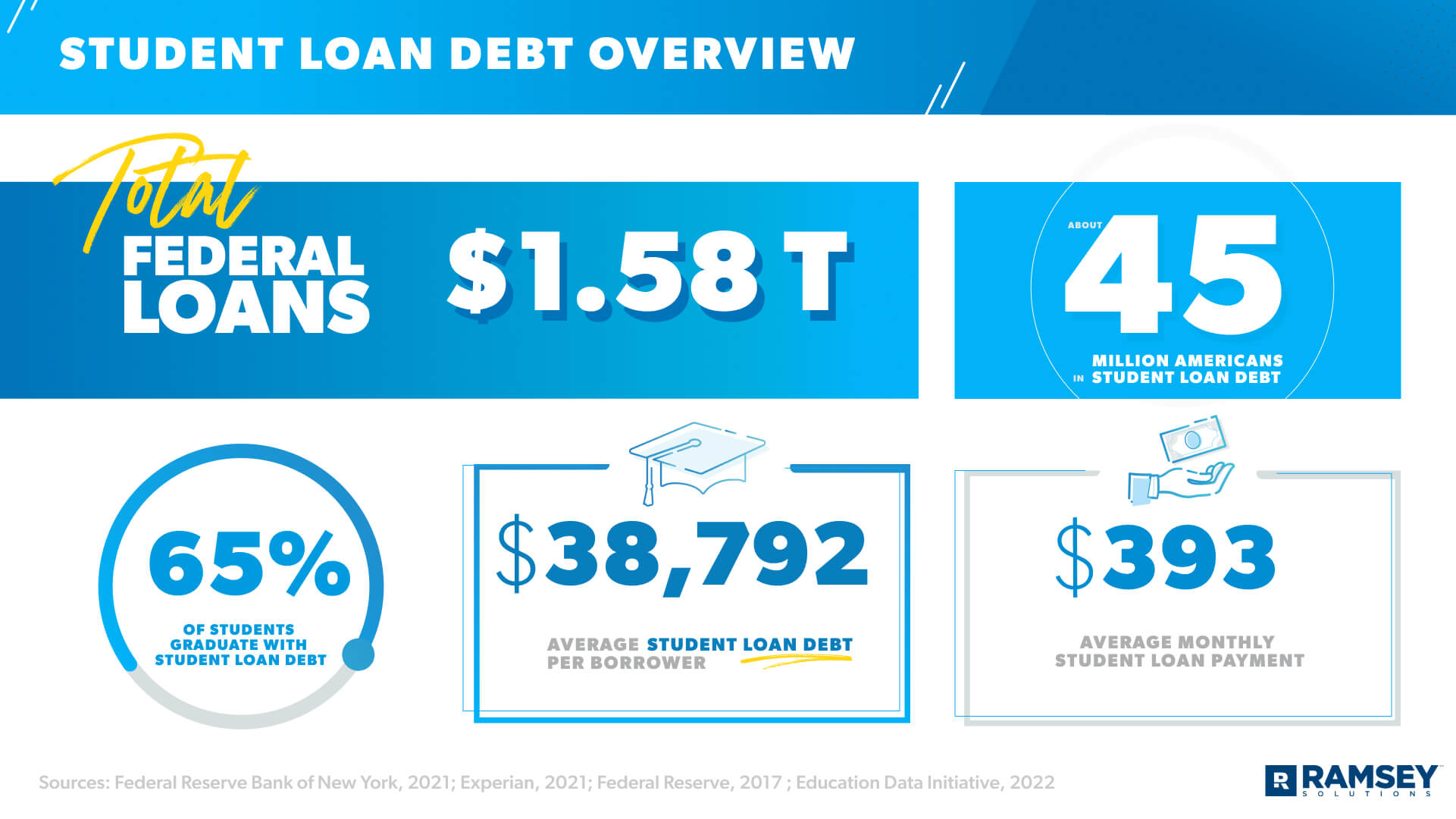 That’s just a sneak peek into what’s going on with student loans in America today. But keep reading for the latest, nitty-gritty student loan research including:

There are two kinds of student loans: federal and private. As of January 2022, 43.4 million borrowers have federal student loans—meaning their loans are funded by the U.S. Department of Education.7 In fact, more than 90% of student loans are federal, and they fall under three main federal loan programs: Direct Loans, Federal Family Education Loans (FFEL) and Perkins Loans.8

Ready to get rid of your student loans once and for all? Get our guide.

The FFEL Program was the first federal student loan program created in 1965. Though this program was eliminated in 2010 (meaning no new loans have been given out since then), borrowers still owe a combined total of $230 billion in outstanding FFEL Program debt.9 Now, all new federal student loans are from the Direct Loan Program. And there are three kinds of Direct Loans: Direct Subsidized Loans (financial need based on the FAFSA), Direct Unsubsidized Loans (no proof of financial need) and Direct PLUS Loans (student or parent takes out the loan to fill in cost gaps after exhausting private loans).

Here’s a breakdown of the amount owed and number of borrowers for each main type of federal student loan:10 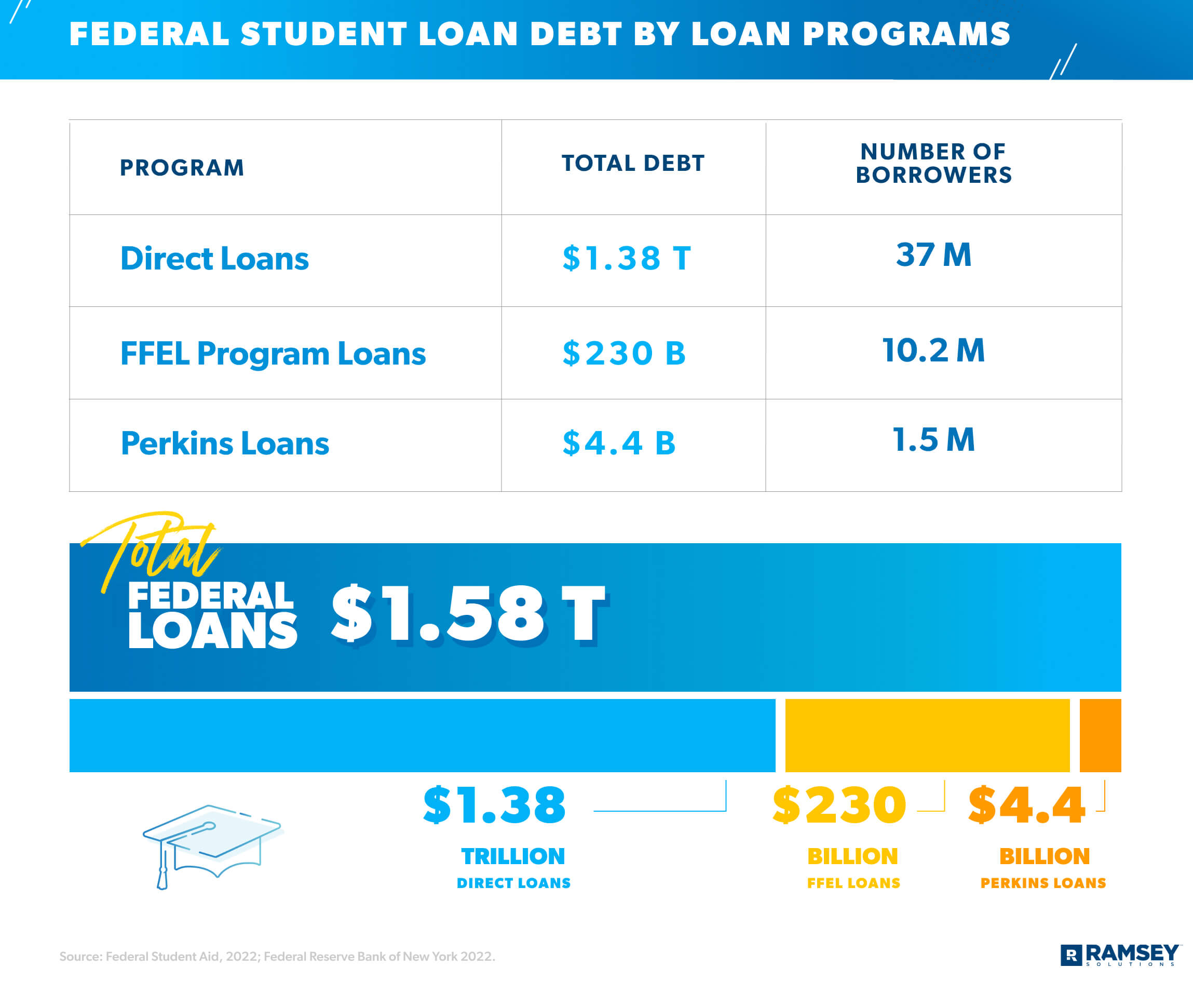 Interest rates for federal loans change over time and vary based on loan type and disbursement date (aka the date when funds are given to the borrower). Perkins Loans are the only exception—those have a fixed rate of 5%.

Right now, federal student loans have a temporary 0% interest rate because of the CARES Act. But once that ends, these will be the interest rates for Direct Loans given out between July 1, 2021, and July 1, 2022:11

The pandemic definitely affected a lot of things—including the student loan industry. Because of the CARES Act, federal student loan payments have been paused since March 2020. But the plan is to start them back up on Sept. 1, 2022.

The good news is, interest hasn’t been growing while those payments have been on hold, so it’s a great time to keep throwing money at your federal loans because it all goes straight to the principal! But not everyone is taking advantage of the situation. As of 2022 Q1, here’s the current status of federal student loan debt (including Direct Loans and FFEL Program loans that are held by the Department of Education).12 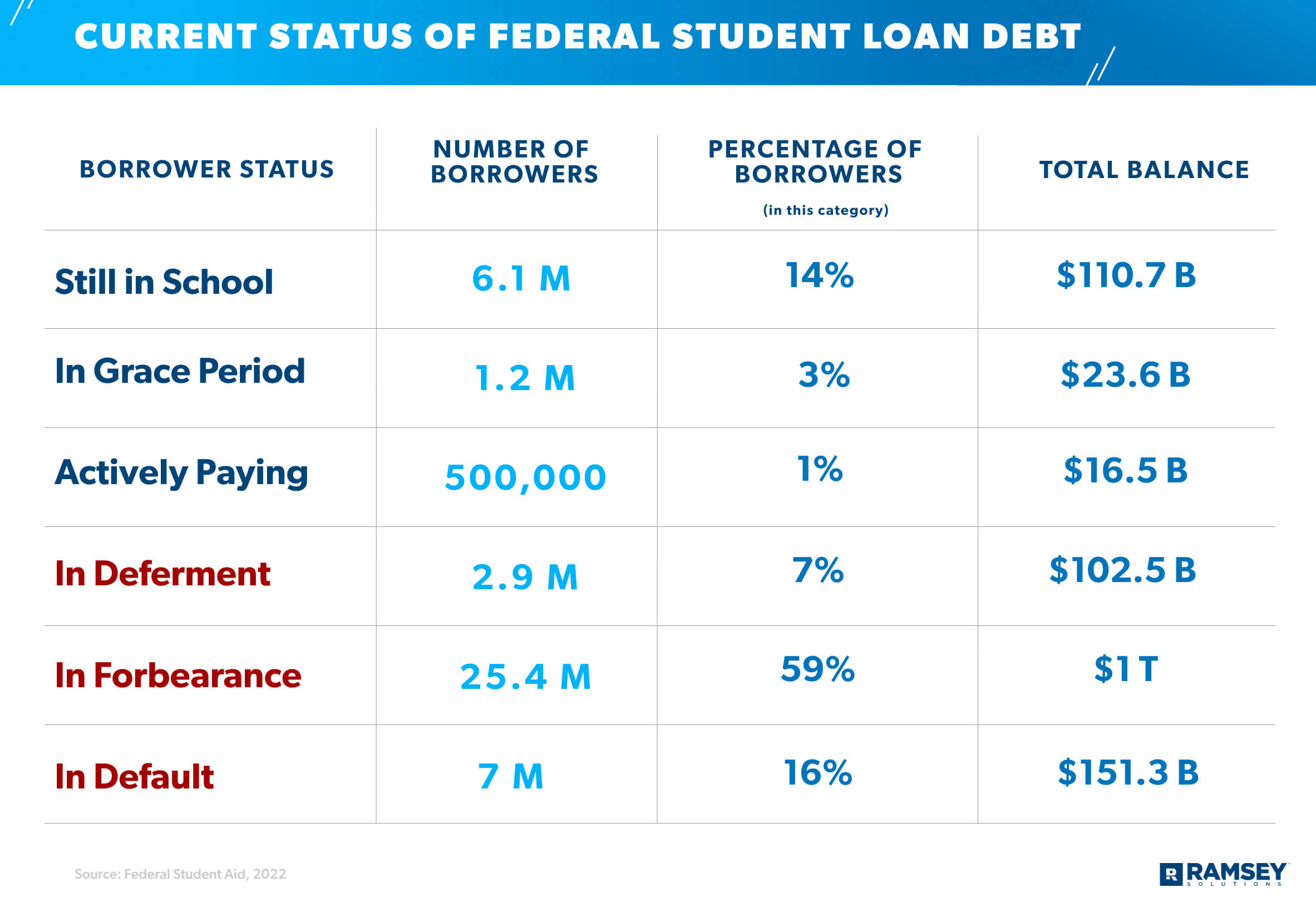 So, if 45 million Americans are carrying around student loan debt, let’s talk about how they’re paying it off (or not).

On average, Americans take 20 years to pay off their college loans, though they can take up to 45 years or more.15 And with an average student loan interest rate of 5.8%, many of those borrowers (21% to be exact) see their loan balance grow in the first 5 years.16,17

Or if it takes you 30 years to pay off that same loan (which would be a $227 monthly payment), you’ll end up handing over $43,526.30 in interest—that’s more than the original amount you borrowed! Ouch.

And if you’re wondering if student loan debt (and all that interest) is worth it, hear this: 44% of high school grads will go to a four-year college, but only about two-thirds of those students will actually graduate.18,19 And if you take out a student loan but don’t complete your degree, you’ve still got to pay back your loans—plus interest. Oof.

The thing about student loan debt is that people are still paying for college long after they’ve left their alma mater. Americans ages 30–39 have the largest amount of student loan debt with a total of $504 billion, but the 18–29 age group isn’t far behind with $357 billion worth of student loan debt.20 And even the 70+ crowd isn’t completely free of student loans. In fact, they collectively owe about $25 billion.21 But it’s not clear whether this total is from a degree earned later in life, lingering loans from their youth, or money they borrowed to put their children or grandchildren through school. 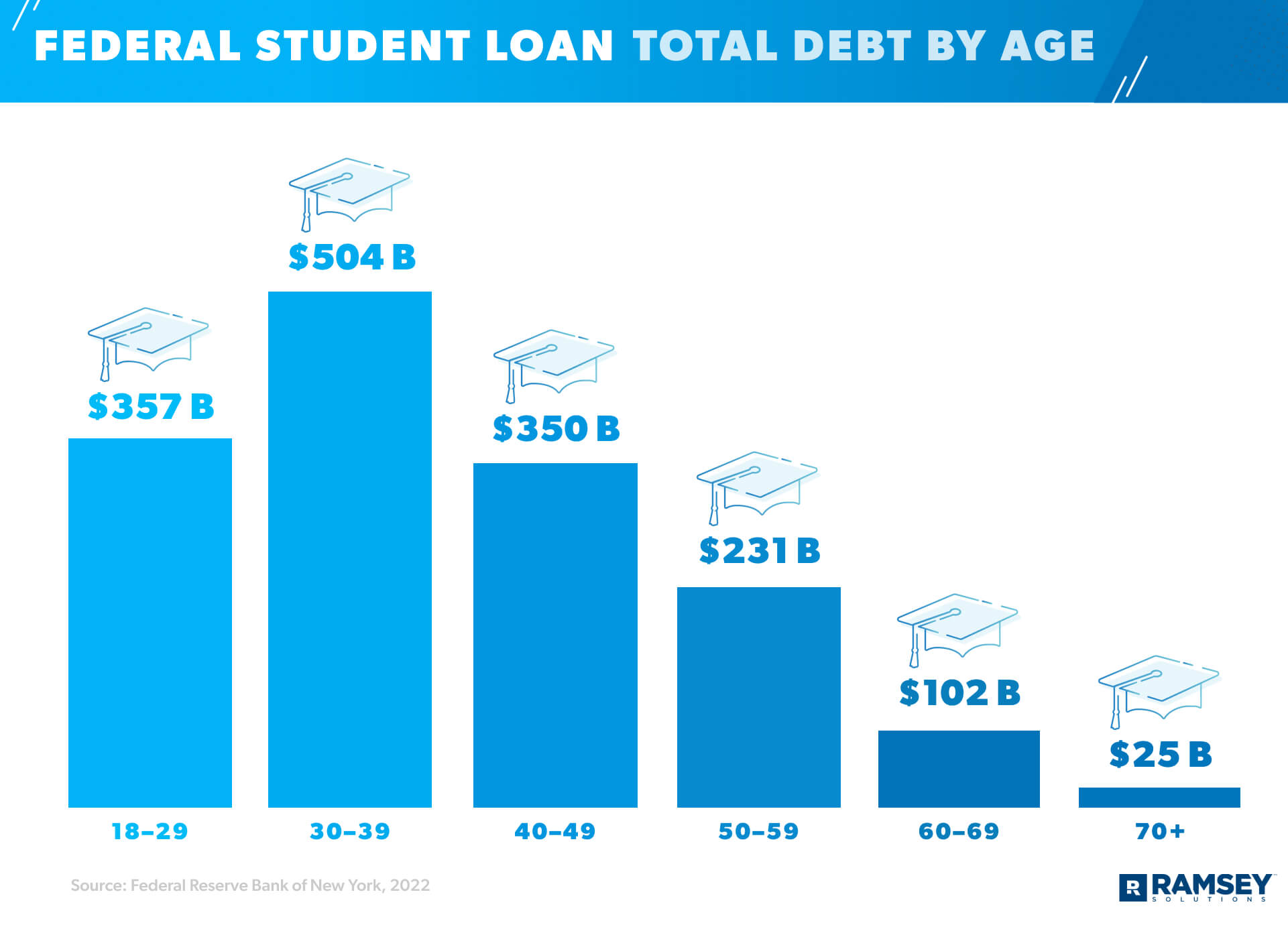 Fun fact: Student loans started partly as a way to produce more scientists and engineers to beat Russia in the Space Race in 1957. Aiming to boost higher education attendance (specifically in science, math and foreign languages), the National Defense Education Act of 1958 is the most likely cause for the rise in college students from 3.6 million in 1960 to 7.5 million in 1970.22

But college attendance isn’t the only thing that’s been on the rise throughout the decades. As we mentioned earlier, student loans are the fastest-growing debt in America. In fact, we’ve seen about 157% growth since the Great Recession in 2007 alone.23 Whether this is because of more expensive tuition (it’s more than double what it was 30 years ago), inflation or more pressure from society to get a college degree, student loan debt is growing steadily.24 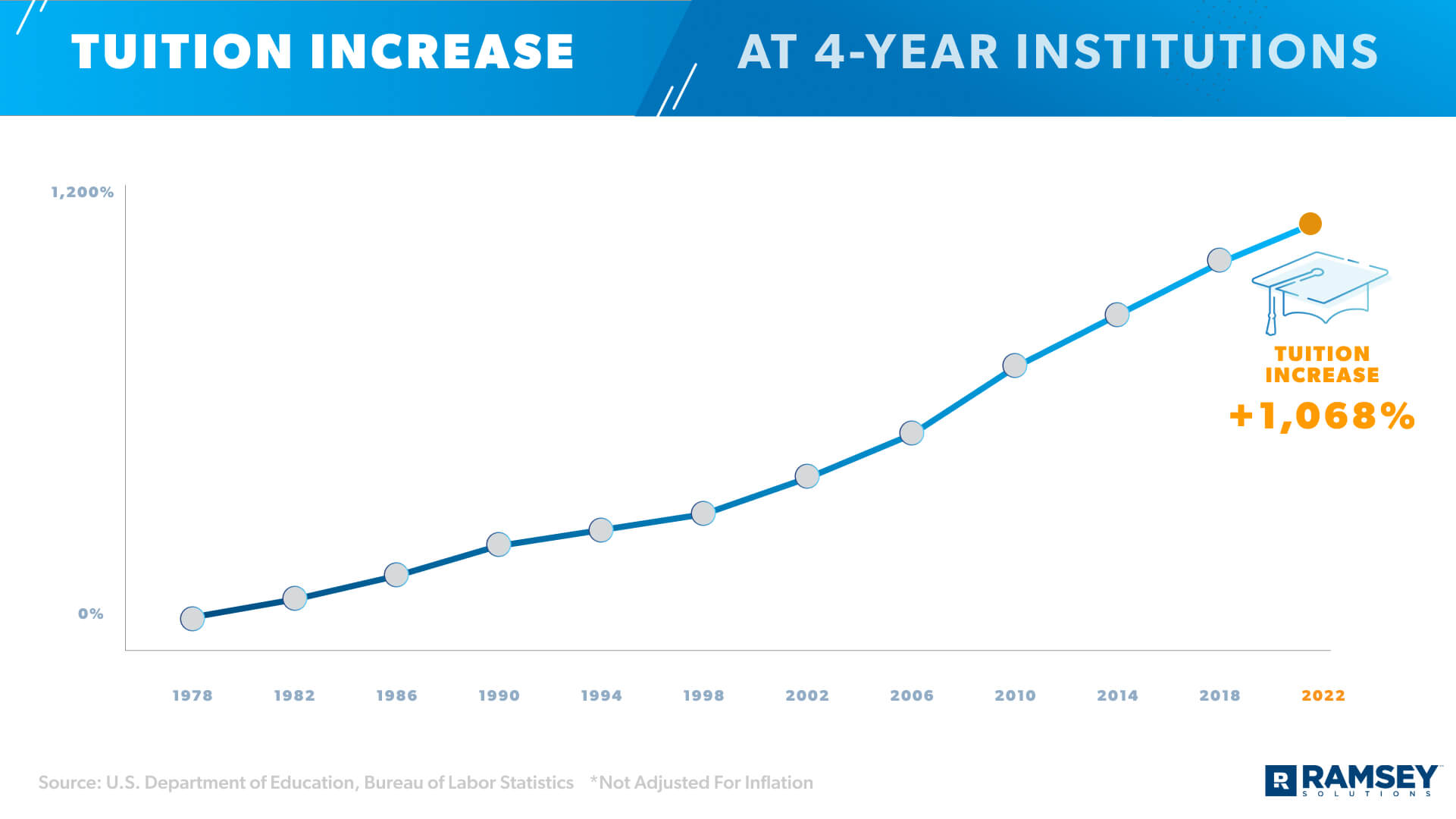 The overall cost of living has also risen over the past 30 years—with higher education costs growing much faster than other areas like health, housing and food. Since 1994, education costs have risen more than 436%.25,26

And more expensive tuition and a rising cost of living leads to . . . (you guessed it) more student loan debt. Students are more tempted than ever to take out loans for their education, without weighing the real cost. 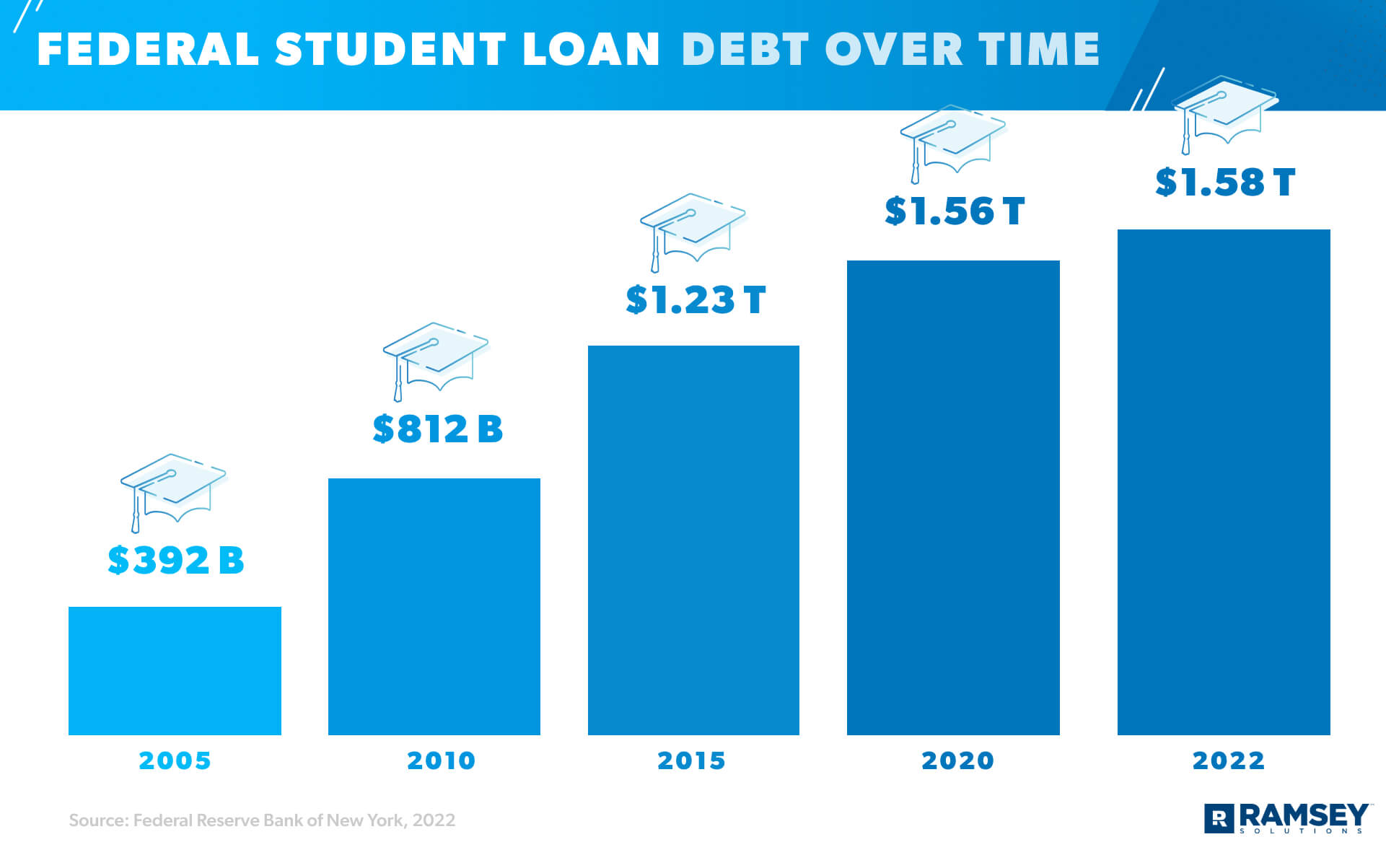 Yeah, these numbers may be a little overwhelming (especially if you’re a high school student or if you’ve got kids heading for college soon)—but there is hope. Remember 1) there are high-paying careers that don’t require degrees, and 2) there are ways to get a debt-free degree, even with the rising costs.

These numbers show the reality of the student loan crisis, but it doesn’t mean you have to be another statistic.

In fact, 47% of young adults have put off buying a home and 21% have even waited to get married because of their student loan debt.27 Also, 60% of those with a degree and student loans say their retirement savings aren’t on track.28

And don’t forget about that $25 billion owed by those age 70 or older. In what should be their golden years of retirement, some Americans are still burdened by student loans.

Also, 22% of borrowers who graduated during the 2015–16 academic year had trouble making payments on their student loans during their first year out of college.29 Not to mention only 40% of those college graduates landed a salaried job within their first year after graduating, and 44% of graduates took a job outside their field of study.30 It's not clear if having student loans caused this, but the pressure of making payments certainly doesn’t help graduates pursue a job they’re passionate about.

With so many Americans feeling the crushing weight of student loan debt, everyone’s hoping their loans will be forgiven. But while President Biden based most of his campaign on forgiving at least $10,000 of student loan debt per borrower, he has yet to live up to that promise.

To be fair, Biden has forgiven more than $15 billion in student loan debt since he took office—for specific borrowers.31 But this was mostly by enforcing or amending already-existing federal student loan policies that protect borrowers with disabilities, students who graduated from schools that closed, and people who work in public service. And $15 billion is only a small slice of the nearly $1.6 trillion of total student loan debt.

It’s also not clear if the president has the power to forgive student loans with an executive order. It would most likely take an act of Congress, and the odds aren’t great for getting both parties to agree to sweeping student loan forgiveness.

As of right now, the three most common student loan forgiveness programs are Teacher Loan Forgiveness (TLF), Public Service Loan Forgiveness (PSLF), and Total and Permanent Disability Discharge (TPD). But borrowers have to meet very specific requirements in order to even apply for these programs, including never missing or being late on a single student loan payment—ever. And the actual approval rates for these forgiveness programs are low. From November 9, 2020, to September 30, 2021, 678,373 Public Service Loan Forgiveness applications were submitted and only 9,038 were accepted (2%).32

What to Do if You Have Student Loan Debt

Student loan debt is no joke. And if you’re already sweating at the thought of having to pay your federal student loans again, you’re not alone. But you don’t have to be held down by the stress of debt or stuck under a mountain of payments. Here are some ways you can destroy your student loan debt once and for all.

Don’t have the extra money to pay toward your student loans? First, go ahead and create a budget to know exactly where your money is going. Next, make sure you’re at least covering your Four Walls: food, utilities, shelter and transportation. Then find areas in your budget that you can scale back on or cut altogether to help you pay more toward your debt. Yes, it takes some sacrifice, but if it will help you get rid of those nasty student loans faster—it’s totally worth it!

Speed up your timeline.

Speaking of payments: If you only make the minimum payment on your student loans each month, it will literally take you decades to pay it all off—plus you’ll fork over thousands extra in interest. Instead, use our Student Loan Payoff Calculator to find out how much faster you can pay off your student loans (and how much interest you’ll save) when you increase your monthly payment. You’d be surprised what a difference even $100 more a month makes. And having a date on the calendar gives you even more motivation to attack your debt!

With refinancing rates being the lowest they’ve been in a long time, it might help you get on top of your loan payments. When you refinance, you use one private lender to pay off all your other lenders and that company becomes your new lender. But you should only refinance if you get a lower fixed rate, if it will help you pay off your debt faster, and if you use a trustworthy company (one that doesn’t try to get you into more debt and doesn’t charge to refinance).

Get a game plan.

Knocking out your student loans is possible. You just need a plan that works.

Check out our Guide to Getting Rid of Your Student Loans. From forgiveness and relief options to budgeting for your loans and paying them off for good, you'll get all the info you need to make progress faster.