If you’ve got an outstanding balance on a credit card (that’s any money you haven’t paid off yet), you could be shelling out hundreds of dollars a year—just in interest. Maybe you’ve already experienced the shock of seeing that number on your credit card statement increase each month. And if you’re not careful, interest can add up faster than the pounds after Thanksgiving.

What Is Credit Card Interest?

Credit card interest can be summed up in three letters: APR. That’s the annual percentage rate. APR is simply the interest rate the credit card company charges you for borrowing money. When you use a credit card to buy anything from eyewear to an iPad, you’re using money that the credit card company is loaning to you. But they’re not doing it for free—they’re tacking a percent of whatever you spend back onto your balance, so you’re paying back more than you’re borrowing. That’s interest.

And even though it’s called the annual percentage rate, APR is actually charged monthly. So, if you don’t pay off your credit card bill by the end of your monthly billing cycle, you’re going to be charged interest since that money is still technically on loan to you.

Maybe you’re thinking, Okay, so I’ll just pay off my card balance each month to avoid paying interest. Let us stop you right there. In 2018, only 47% of Americans who had a credit card actually paid off their balance each month.1 That’s definitely not the best odds.

Bottom line: Interest is money you’re charged just for the act of borrowing. Um, no thank you!

How Is Credit Card Interest Calculated?

It’s time to dust off that old algebra textbook, sharpen those pencils, and get out your graphing calculator. Just kidding! You don’t have to be an accountant to figure out how much you’re paying in interest, but there is some math involved. Don’t worry, though—we’ll walk you through it.

If you don’t already know your credit card’s APR, it’s time to find out. Your rate will depend on what kind of card you have, so go ahead and hit up the credit card company’s website to find out what yours is. But keep in mind that you may have more than one if you’ve got multiple cards.

Let's say you just bought a new living room set on credit and paid $2,100. That's your account balance. If you’re wondering what your current account balance is, you can find it on your most recent credit card statement (which you should get in the mail or be able to see online).

4. Calculate how much you’re paying daily.

Take the daily interest rate you figured out in step two and multiply that number by the account balance. That will give you the amount of interest—in dollars—that will be added to your account every single day if you let your balance roll over. So, for this example, $2,100 multiplied by 0.00041096 equals 86 cents that you’re paying in interest each day. But wait, there’s one more thing to consider when it comes to how much credit card interest you’ll pay. 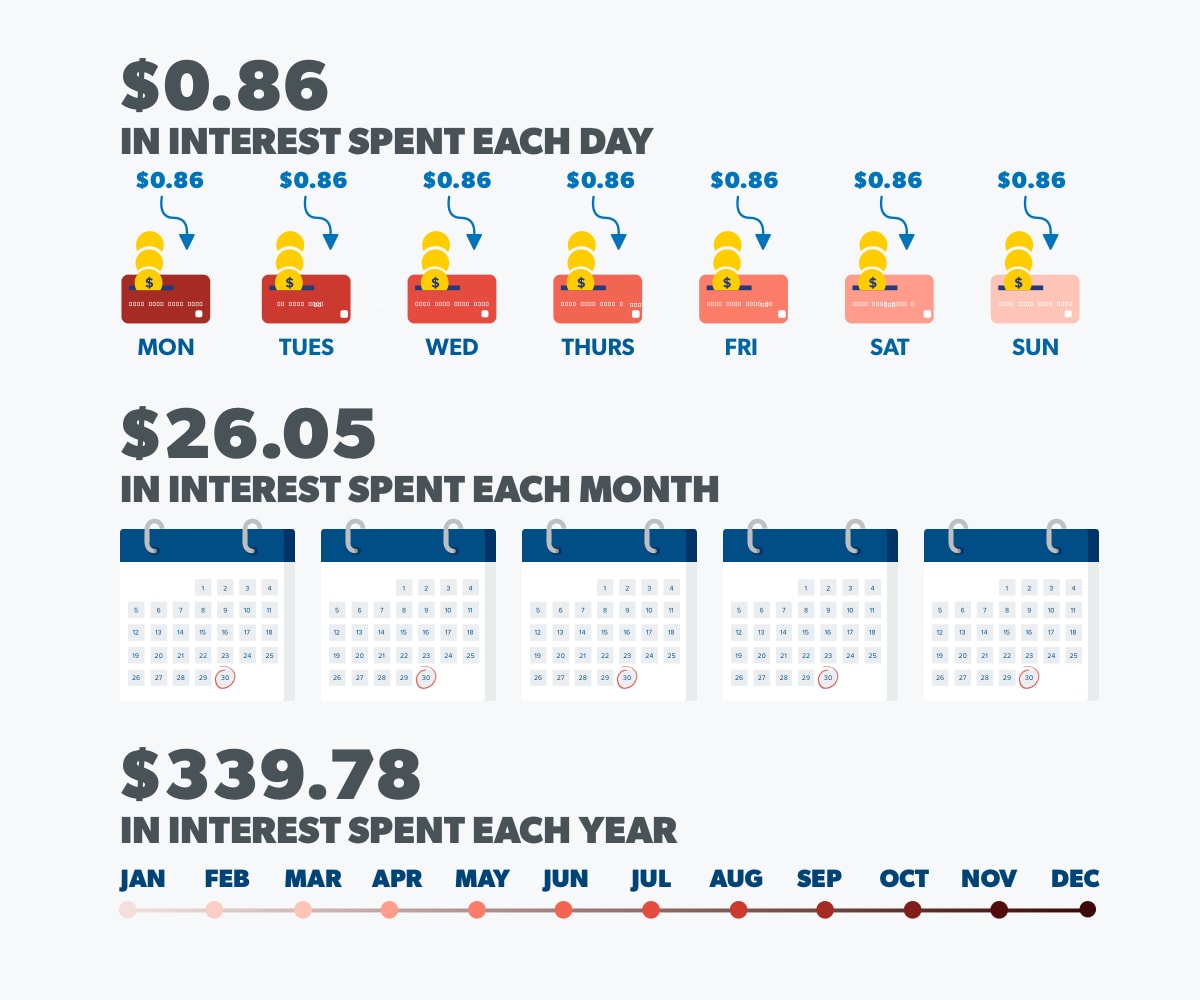 Paying almost $2,500 for a $2,100 living room set? You don’t have to be Bob Barker to realize that price isn’t right. When you do the math, you see exactly how much interest is costing you in dollars—and not just annually, but monthly, which is when those numbers can really punch you in the gut.

Don't let that final number fool you, though. You could end up paying more interest because of things like annual fees and late payments. Also, keep in mind that if you stop making minimum payments for any reason at all, that interest is going to bring your account balance up—which means even more interest!

How Is APR Determined?

So, now we know how interest is calculated, but where does your APR come from? It may seem like credit card companies just spin a wheel to decide your annual percentage rate. But there actually is some logic behind the number.

If credit card companies are going to lend you money, they want to make sure you’ll pay it back. And if there’s a higher chance you won’t pay off your credit card bill each month, then your interest rate will probably be higher as well. So, your interest rate usually depends on your credit score and your income—because those are things that show you’re more likely to pay off your balance regularly.

In the credit card biz, they call this someone’s “creditworthiness.” But if the only way to prove you’re “worthy” enough to borrow money is to go into debt first, then it isn’t something you should be aiming for. Instead, think of APR as your “credit riskiness.”

And like we said before, there are also different types of APRs for different credit cards. Here’s a quick rundown of each APR type:

Variable APR means the interest rate can change. The rate is usually based on the prime rate, which is basically an average of what banks across the country are charging in interest. When the prime rate changes, so does your individual interest rate on your credit card.

Fixed APRs tend to stay the same. But there are still some reasons why a credit card company could raise your rate—like if you’re more than 60 days late on a payment.

This is the interest you get charged on credit card purchases when you don’t pay off your entire balance by the due date each month.

You get hit with a cash advance APR when you borrow against your credit limit. It’s the same as if you used a debit card to take money out of an ATM before it was in your account. There’s no grace period with these (time between the end of your billing cycle and when your payment is due), and they’re typically a higher interest rate than purchase APRs. You could also get charged additional fees every time you make a cash advance.

You get hit with a penalty APR when you spend more than your credit limit or make a late payment.

If you move a balance from one card to another, a credit card company may offer a low balance transfer APR. But like introductory APRs, these usually don’t last long and will spike back up once the intro period is over.

Other types of APR

Of course, there are also cash back cards, airline miles cards, and cards that offer points for hotels—basically, if there’s a perk, they’ve made a credit card for it. But credit cards with rewards usually have higher interest rates. You didn’t think those free perks were actually free, did you?

Let’s say you have a credit card that offers 3% cash back. You would have to spend $100 just to get $3 back. Really? That’s not winning. That’s being a part of a system that makes money off millions of people. Rewards are just a way to get credit card users to spend more with their cards each month, which increases the chance they’ll have to pay it back with interest later.

Even if you have a lower APR, don’t get too comfortable. Credit card companies still have the power to raise your interest rates on new cards, and in some cases, they can even raise the rates on current balances—so no APR is guaranteed.

Listen: Don’t play this game. Credit cards are not worth your time—or your hard-earned money. Period.

You may be surprised to find that APRs on credit cards can inch all the way up to 26.13%.2 That’s more than a fourth of your balance! Depending on how much you carry on your account, that could add up to . . . well, a lot. Even just $100 left unpaid each month could result in an extra $25 you owe by the end of the year—and let’s be real, people carry way more than just a Benjamin Franklin on their credit card statements.

As of 2019, the average APR on credit card accounts is around 16.88%, which is almost 4% more than it was five years ago.3 And that’s after the Federal Reserve slashed interest rates for the first time in over a decade!4

Of course, different lenders handle interest rates many different ways. And depending on the kind of card, your interest rate may be higher or lower than the average APR nationwide. But with the average American household knee-deep in $7,136 of credit card debt, you better believe APRs will continue to rise.5 6 7

How to Avoid Credit Card Interest

Listen, you don’t want to pay interest on anything because that’s money you’re forking over for the “privilege” of borrowing. Instead, ditch borrowing completely and save up cash to pay for things. It lowers your risk of having to pay interest by 100%.

But what if you already took out a loan for that new couch, home entertainment system, or set of wheels? If you’ve got credit card debt or a balance that’s threatening to push you into interest territory, here are some steps you can take to get out of the danger zone.

Pay Off Your Balance as Soon as Possible

While paying the minimum credit card payments on time will help you avoid interest, it’s still playing with fire. It only takes one emergency to keep you from paying your bill in full. Before you know it, you could be buried in a pile of interest. Instead, the smartest way to avoid credit card interest is to pay off your balance as soon as possible. That means getting aggressive!

Personal finance is 80% behavior and 20% head knowledge. And the debt snowball method is the fastest way to tackle your credit card payments because it helps you change your behavior.

Here’s how it works:

Step 1: List your debts smallest to largest, regardless of interest rate (we know we’ve been talking about the importance of interest this whole time, but trust us when we say it doesn’t matter in this step). Pay minimum payments on everything but the smallest balance.

Step 2: Attack the smallest debt with everything you’ve got. Once that debt is gone, take that payment (and any extra money you can squeeze out of your budget) and apply it to the second-smallest debt while continuing to make minimum payments on the rest.

Step 3: Once that debt is gone, take its payment, and apply it to the next-smallest debt. The more you pay off, the more your freed-up money grows and gets thrown onto the next debt—like a snowball rolling downhill.

The debt snowball method works because it helps you gain momentum as you go and keeps you motivated as you crush those debts one at a time!

And listen up: The faster you work on your debt snowball, the sooner those credit card payments—and that interest—will stop cramping your monthly budget.

Use Other Payment Methods

Debit cards, PayPal, Apple Pay, Venmo—there are so many payment options that are better than a credit card. But there’s nothing quite as satisfying as paying for something with cold, hard cash. When you swear off credit cards, you can make your purchase without having to worry about it haunting you in the form of interest later.

If you're ready to steer clear of credit card interest and say goodbye to debt forever, it’s time to ditch the toxic money habits that are holding you back. Financial Peace University will show you how to budget, pay off debt, save and build wealth for your future. It’s a proven plan that’s helped nearly 6 million people just like you get out of debt—once and for all. You can have a life without debt and find financial peace!