While not exactly split down the middle, Americans do fall into two nearly equal groups when it comes to retirement saving. Savers make up the slight majority at 58% of Americans, leaving 42% who are not currently saving for the future.

But the differences between savers and non-savers go much deeper than that. Age, income, gender and marital status all have an effect on who saves and how much.

Results from a 2016 survey of more than 1,000 U.S. adults also show that even among savers, few are setting aside enough to afford a truly secure retirement. In fact, only one in 10 Americans save 15% or more of their income—the amount industry experts recommend individuals set aside in order to build adequate savings—for retirement. The final report in a four-part series based on the survey commissioned by Ramsey Solutions focuses on who is saving, how much they’re saving, and how their retirement dreams match up to reality.

Of the Millennials who have money set aside for retirement, 42% have saved less than $25,000, and half of Gen Xers with savings have $25,000 or more. But 28% of Millennials and 20% of Gen Xers have no retirement savings at all. 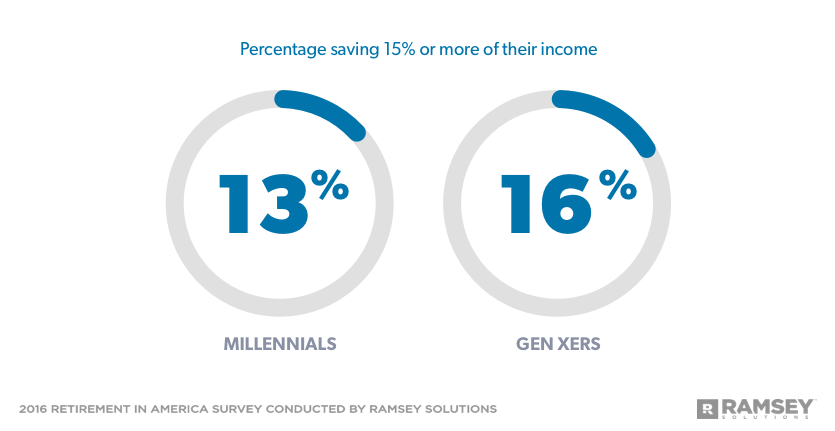 Many Baby Boomers are already facing a shortfall: 54% of Baby Boomers still in the workforce have less than $25,000 saved for retirement. Of that group, more than half have no retirement savings at all. 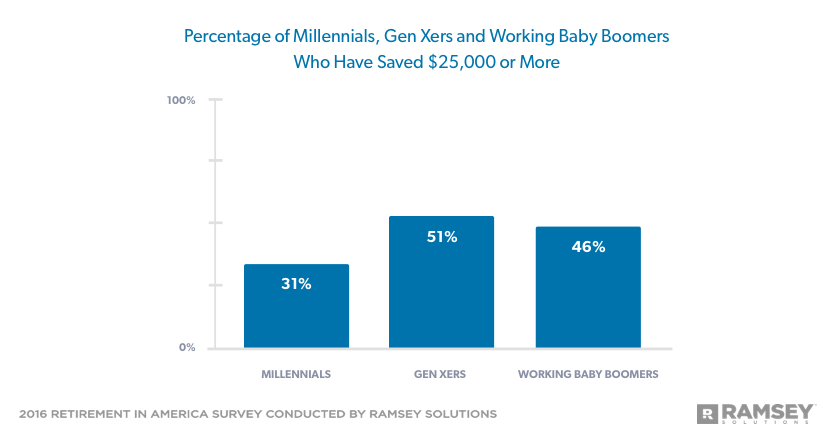 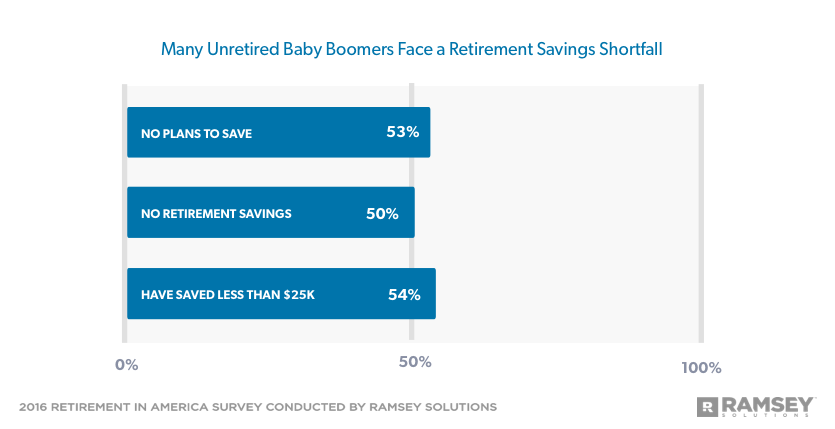 Almost two-thirds of middle-income earners are currently saving for retirement, but only 9% save 15% or more of their income. Just 22% have saved at least $50,000 for retirement, and 27% have empty nest eggs.

There's no denying that setting aside money for retirement can be easier on a larger income. But with careful planning and budgeting, people at any income level can save for a comfortable retirement. It won’t always be easy, but saving money now is a lot easier than facing retirement with no money.

What’s Standing in the Way?

Of those who are currently saving for retirement, seven in 10 wish they were saving more, and often, the obstacles preventing them from saving more are the same regardless of age, income, gender or marital status.

Cost of living was the top reason why people don't save more for retirement in all demographic groups. Kids' activities/needs ranked second or third for Millennials, Gen Xers, all income levels, married and single people, and parents. Medical expenses are a top financial hurdle for Baby Boomers (24%), while credit card debt is a problem for men (25%) and those who don't have children (21%).

On the other hand, almost one-third of savers who are in debt ranked credit card debt (31%) and their primary mortgage (31%) as the top reasons they don't save more for retirement. Medical expenses ranked third (27%).

Of those who are not currently saving for retirement, 62% say they plan to save in the future. While the cost of living also ranked as the number one reason non-savers aren't saving now, lack of planning is an issue as well. It ranked as the second or third reason across all demographic groups.

Despite their lack of personal retirement savings, non-savers' vision of their golden years is the same as that of savers. Both groups want to spend their retirement with their family and traveling for pleasure.

Conclusion: The Retirement Crisis Is Here, But There Is Hope

The retirement savings crisis is no longer on the horizon—it's already here. According to Pew Research, 10,000 Baby Boomers reach age 65, traditional retirement age, every day. But nearly half of them, 49%, will face their golden years with less than $10,000 saved.