If you grew up around snow, you know that the fastest way to build a snowball is to pack some snow into a tight ball and start rolling it around your yard. As you gain momentum and speed, your snowball grows into a snow boulder.

So why in the world are we talking about snowballs? Because when you use this technique to pay off your debt, you’ll be debt-free in no time. And if you’re following Dave Ramsey’s 7 Baby Steps, you’ll use this method when you reach Baby Step 2—meaning you’re current on all your bills and have a $1,000 starter emergency fund.

How Does the Debt Snowball Method Work?

The debt snowball method is a debt-reduction strategy where you pay off debt in order of smallest to largest, gaining momentum as you knock out each remaining balance. When the smallest debt is paid in full, you roll the minimum payment you were making on that debt into the next-smallest debt payment.

Here’s how it works:

Step 1: List your debts from smallest to largest regardless of interest rate.

Step 2: Make minimum payments on all your debts except the smallest.

Step 3: Pay as much as possible on your smallest debt.

Step 4: Repeat until each debt is paid in full.

Now, before you start arguing about the interest rates, hear us out. If your largest debt has the largest interest rate, it’s going to be a long time before you start to see a dent in that crazy balance of yours. But when you stick to the plan (without worrying about interest rates), you’re going to be jumping up and down when you pay off that smallest debt super quick. That excitement is what’s going to motivate you to keep working hard—all the way to that debt-free finish line. But more on this later. 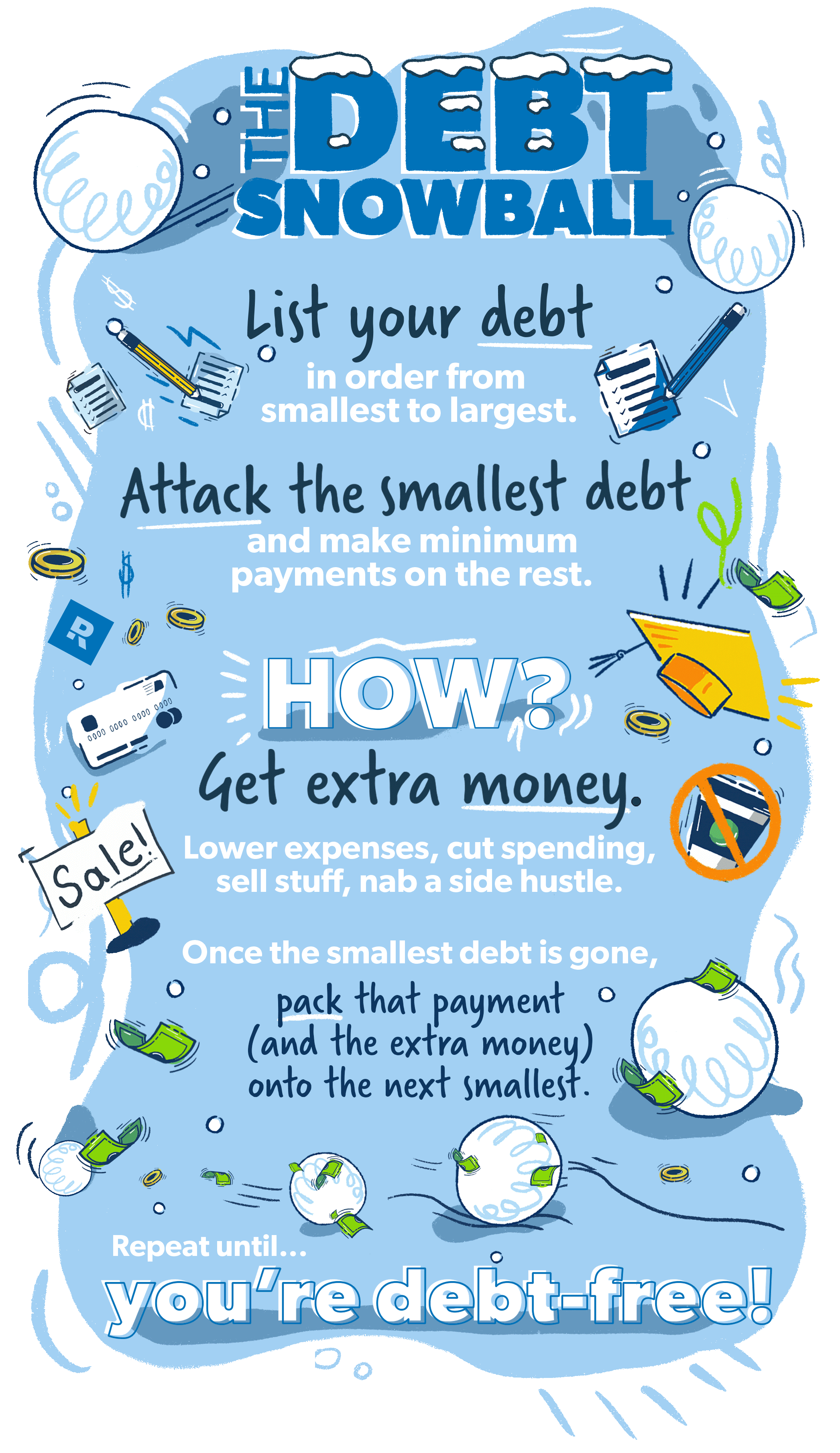 Why Does the Debt Snowball Method Work?

The debt snowball works because it’s all about changing your behavior. You don’t have to hold a math degree or have gone to business school to beat debt. Hope has more to do with this equation than math ever will.

Winning with money is 80% behavior and only 20% head knowledge. If you can get that person in the mirror to change their habits, there’s no stopping you!

What about interest rates?

If you start paying on the student loan first because it’s the largest debt, you won’t get rid of it for a while. You’ll see numbers going down on the balance, but pretty soon you’ll lose steam and stop paying extra. Why? Because it’s taking forever to get a win! And you’ll still have all your other small, annoying debts hanging around too.

But when you ditch the smallest debt first, you see progress—quick! That debt is out of your life forever. The second debt will soon follow and then the next and the next. Suddenly, you’re putting hundreds of dollars a month toward your debts instead of small incremental minimum payments. When you see your snowball actually working, you’ll be more likely to stick to it. The next thing you know, you’ll be screaming “I’m debt-free!” in no time.

An Example of the Debt Snowball

The easiest way to learn this method is by working through a real-life example. Let’s say you have four different debts:

Using the debt snowball method, you make minimum payments on everything except the $500 medical bill. And since you’re super focused on your goal, you decide to get a side job bringing in an extra $500 each month and add it to your snowball.

Since you’re paying $550 a month on the medical bill (the $50 minimum payment plus the extra $500), that debt is completely gone in one month. Now you can take the freed-up $550 and attack your credit card debt, paying a total of $613 ($550 plus the $63 minimum payment). In about four months, you’ll be waving goodbye to that credit card with glee.

By the time you reach that dreaded student loan (your biggest debt), you can put $844 a month toward it. That means you’ll be sending Sallie Mae your final payment in 12 months. See ya, Sallie!

With all your hard work and sacrifice, throwing extra money into the snowball and staying focused on the goal, you’ll have paid off $20,000 in just 27 months using the debt snowball method. Isn’t it amazing!

How to Stay Motivated Working the Debt Snowball

Okay, so the downside of the debt snowball method is that it takes work.

Hey, you can do this. Just like the snowball gaining speed on its way down the hill, you can power through paying off debt. Watch your momentum—and success—grow as you go, one debt at a time.