When you’re stuck in the deep end of credit card debt, student loan payments, car loans and medical bills, it’s hard to stay above water. Especially when all those minimum payments don’t seem to be doing anything but keeping the debt collectors at bay. It’s hard not to let worry drag you down . . . but one thing can and will make it worse: debt consolidation.

Sure, the allure of one easy payment and the promise of lower interest rates are enough to have you dreaming of the day you can stop worrying about money. But is debt consolidation really a good idea?

Listen closely: Debt sucks. But debt consolidation loans and debt settlement companies won’t help you slay those massive amounts of debt. In fact, you end up paying more and staying in debt even longer.

What Is Debt Consolidation?

Debt consolidation is the combination of several unsecured debts (think payday loans, credit cards or medical bills) into one monthly bill with the illusion of a lower interest rate, lower monthly payment and even a streamlined debt-relief plan.

Debt consolidation promises one thing but delivers another. So before you decide to consolidate your debt, here’s what you need to know:

How Does Debt Consolidation Really Work?

After totaling up your debts, you consult a company that promises to lower your payment to $640 per month and your interest rate to 9% by negotiating with your creditors and rolling the two loans together into one. Sounds great, doesn’t it? Who wouldn’t want to pay $460 less per month in payments?

So you shelled out $2,282 more to pay off the new loan—even with the lower interest rate of 9%. This means your “lower payment” has cost thousands more and kept you in debt for longer. One word for you: rip-off. 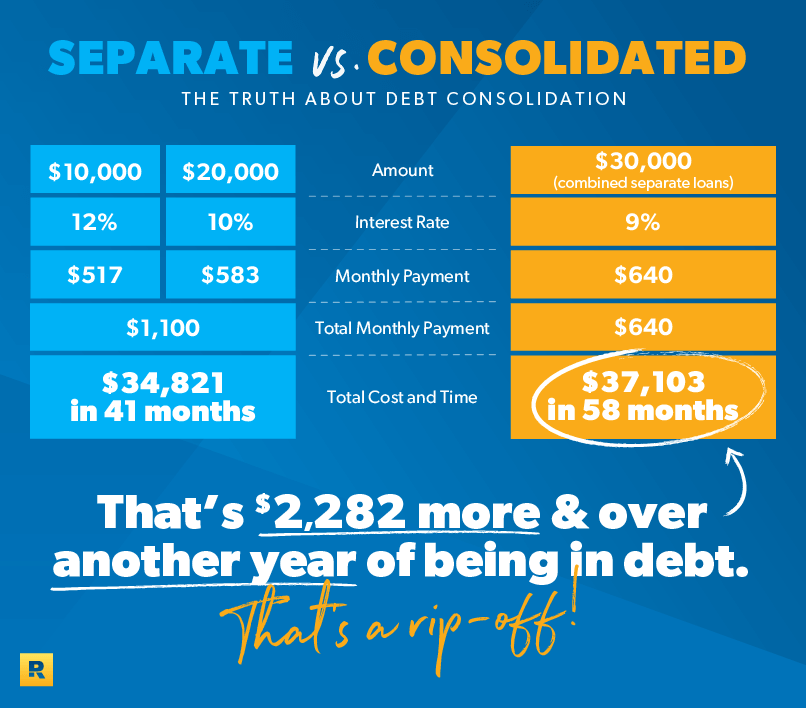 Should I Consolidate My Debt?

Not a chance. Here are five reasons why you should skip debt consolidation and follow a plan that will actually help you take control of your money:

1. When you consolidate your loans, there’s no guarantee your interest rate will be lower.

The debt consolidation loan interest rate is usually set at the whim of the lender or creditor and depends on your past payment behavior and credit score. Even if you qualify for a loan with low interest, there’s no guarantee your rate will stay low.

One way to combat this is by changing your spending habits. If you never change how you deal with money, you’ll never have any money.

This specifically applies to consolidating debt through credit card balance transfers. The low interest rate is usually just a promotion and only applies for a certain period of time. Spoiler alert: That means this rate will eventually go up.

Be on guard for “special” low-interest deals before or after the holidays. Some companies know that holiday shoppers who don’t stick to a budget tend to overspend and then panic when the bills start coming in.

And other loan companies will hook you with a low interest rate, then inflate the interest rate over time, leaving you with even more debt!

3. Consolidating your bills means you’ll be in debt longer.

In almost every case of credit consolidation, those lower payments mean that the term of your loan gets dragged out. Extended terms mean extended payments. No thanks! The goal isn’t to extend the length of time you’re making payments—your goal is to get out of debt . . . ASAP!

5. Your behavior with money doesn’t change.

Most of the time, after someone consolidates their debt, the debt grows back. Why? Because they don’t have a game plan to stick to a budget and spend less than what they make. In other words, they haven’t established good money habits for staying out of debt and building wealth. Their behavior hasn’t changed, so why should they expect their debt status to change too?

What’s the Difference Between Debt Consolidation and Debt Settlement?

There’s a huge difference between debt consolidation and debt settlement, even though these two terms are often used interchangeably. Pay attention here, because if you’re not careful, these sneaky companies will reel you in with false claims that they’re actually trying to help you.

We’ve already covered consolidation loans: a type of loan that rolls several unsecured debts into one single bill. But debt settlement is different. Debt settlement is when you hire a company on your behalf to negotiate a lump-sum payment with your creditors for less than what you owe.

Sounds good, right? Someone does the dirty work and you get to keep more of your paycheck? Yep—but not so fast. These debt settlement companies also charge a fee for their “services.” The fee is usually anywhere from 15–20% of your debt.

And if that’s not bad enough, dishonest debt settlement companies often tell customers to stop making payments on their debts and instead pay the company. Once you fork over the fee, they promise to negotiate with your creditors and settle those debts on your behalf.

Well, the debt settlement companies usually don’t deliver on helping you with your debt after they take your money. They’ll leave you on the hook for late fees and additional interest payments on debt they promised to help you pay!

Debt settlement is a scam, and any debt relief company that charges you before they actually settle or reduce your debt is in violation of the Federal Trade Commission.1 Trust us: You should avoid debt settlement companies at all costs.

The Fastest Way to Get Out of Debt

When you choose to consolidate or settle your debts, you’re only treating the symptoms of your money problems. It’s time to get to the root of why you have money issues in the first place. And you do that by looking in the mirror.

Like we said before, you’ve got to start by changing your behavior, and then you’ve got to change the way you view debt. Make a commitment to not spend a penny—unless it’s your own.

Dave says, “Personal finance is 80% behavior and only 20% head knowledge.” And even though your choices up to this point have landed you in a pile of debt, you have what it takes to work your way out! All you need is the right plan.

But there’s no quick-fix solution, and it definitely won’t come in the form of debt consolidation or a new loan with a better interest rate. The only way to keep your paycheck is by rolling up your sleeves and getting to work. But you don’t have to do it alone. We’re here to help.

Sign up for your free trial of Ramsey+ and we’ll help you learn how to defeat debt, save for emergencies, live on less than you make, and build wealth! Ready to get to work?