If you feel like you need to take out a mortgage to afford these outrageous gas prices, you’re not alone. We’re seeing the highest gas prices ever, and the pain at the pump is really starting to hurt our budgets. After a steady uphill climb where each new price kept setting records, the average price for a gallon of gas hit an all-time record high of $5.01 a gallon on June 14, 2022.1 Gross. Prices dropped below $4 during the summer, but is that really a win? Plus, word on the street is, they may be headed back up.

So, what do those record-breaking numbers add up to in real life? Well, researchers estimate the average American family is going to spend an extra $2,000 this year on gas.2 Great. But don’t toss your car keys into the trash and start walking just yet. We’ve got some tips to help you feel less pain at the pump each time you fill up. But first, let’s dig into the big question on everyone’s mind: Why is gas so expensive these days?

Why Are Gas Prices So High?

If you guessed a cocktail of inflation, the Russia-Ukraine conflict, crude oil prices, travel, and not enough refineries, you win. But the answer to the age-old question, “Why are gas prices so high?” isn’t quite that simple. A lot of factors impact why gas prices are so high. Let’s dig into all the stuff coming into play here one by one.

First up, let’s talk about the big, bad I-word. The crazy high inflation rate (currently sitting at 8.2% over the previous 12 months—the highest in about 40 years) has played a huge role in driving up gas prices.3 In fact, we’ve seen growth in gas prices since December 2020 when gas was about $2.25 a gallon.4

So, when someone tells you expensive gas prices are only because of the Russia-Ukraine conflict, you can tell them, “Well, actually . . . that’s not the whole picture.”

Let’s be clear here again: Gas prices were already going up before Russia invaded Ukraine. But the war between Russia and Ukraine definitely threw extra gasoline onto the fire.

On March 8, 2022, the average price for a regular gallon of gas climbed to an all-time high (back then) of $4.17, leaving the old record from 2008 in the dust.5 Gas prices jumped 11 cents overnight and more than 50 cents from the week before!6 That’s insane.

On that same day, President Biden signed an executive order to ban the import of Russian oil, natural gas and coal to the U.S.7 Why does that matter? Well, because Russia is one of the biggest oil exporters in the world. It’s basically just a giant gas station (minus the day-old hot dogs).

Gas prices eventually went on a long, crazy streak of record highs, topping out at $5.01 on June 14, 2022.8 Following that record high, gas prices steadily fell throughout the summer, getting close to the mid-$3 range. But recently, they’ve started inching back up again.9

Even without all the other stuff going on in the world, gas prices historically go down in the fall after the end of the summer travel season and in the winter at the end of the holiday travel season. Right now, average gas prices are sitting around $4.10 For some folks, that’s enough to make them cut back on holiday travel plans.11 But for others, they’ll cough up the cash and accept it as the price they’ll have to pay to spread some Christmas cheer.

Trying to figure out why gas prices are so high doesn’t just stop there. Prices at the pump are impacted by the cost of crude oil going up too. Like we said before, Russia is a big-time exporter of oil, and the war made oil prices spike to over $120 a barrel. Right now, the cost of a barrel of crude oil is in the $90 range.12

But oil prices could be headed back up after OPEC+ (Organization of Petroleum Exporting Countries) announced it was cutting oil production to raise prices.13 OPEC+ is a group of oil-producing countries (including Russia) that tries to control oil prices. They can just decide to raise prices one day (by cutting production), and the United States really can’t do much about it. That sucks, right?

OPEC+ usually tries to find a sweet spot to maximize its profits without raising prices too high and causing demand to fall drastically.

These insane gas prices we’ve seen lately have a lot to do with oil refineries. It’s one thing to have a low gas supply, but it’s another thing to have low capacity to refine the gasoline. That’s what we’re seeing now. In a normal year, refineries start producing more gasoline so they can have a surplus going into summer. Oh—but not this year. Gas inventories are at their lowest seasonal level since 2019.14

And there's one more thing you can add to the list here. President Biden is focused on getting the country away from using gas-powered vehicles. He stopped work on the Keystone XL oil pipeline shortly after he took office.15 So gas companies have little incentive to invest massive amounts of money into building new refineries because they feel like they’re being pushed out of business by clean energy laws. 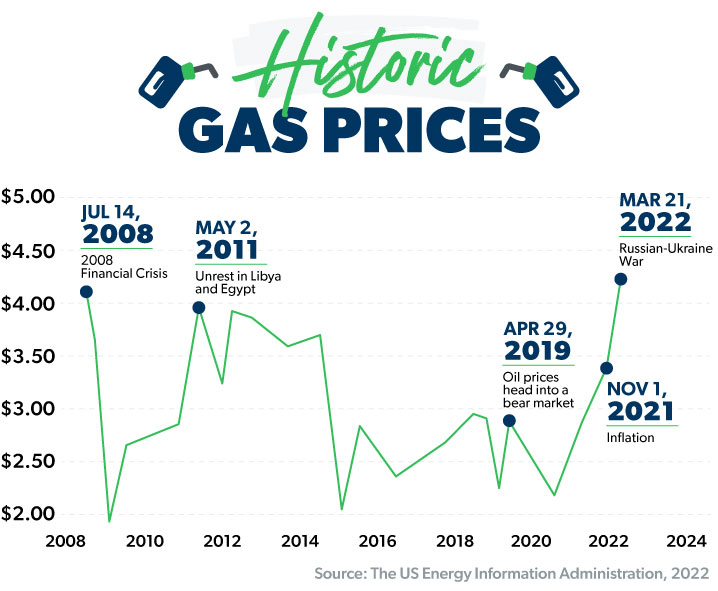 What Has the Government Done to Lower Gas Prices?

Good question. There are a few tricks up the government’s sleeve, so let’s walk through what they’ve actually done and what they might do.

Say what? Yep, you read that right. There’s chatter about gas stimulus checks becoming a possibility. Democrats have talked about something called the Gas Rebate Act of 2022—legislation that would give a $100 monthly rebate (and $100 for each dependent) to help Americans pay the higher gas prices.16 The idea is that payments would continue throughout 2022 during any month when the national average gas price is $4 or more.

Now, before you head to the pump ready to fill up on Uncle Sam’s dime, remember that nothing has been approved yet. But we know the government’s history of dishing out stimulus checks . . . so there’s that. Stay tuned, and we’ll let you know if this thing picks up any speed.

Back in November 2021, President Biden told the Department of Energy to release 50 million barrels of oil from the Strategic Petroleum Reserve (the U.S. emergency stash of underground gasoline), but it didn’t do much to help gas prices ease up.17 Fast-forward to the end of March 2022 and Biden announced he would release 1 million barrels per day for the next six months from the Strategic Petroleum Reserve.18 The hopes were that this would soften that crazy price surge, but it didn’t really make a huge difference.

Look, it’s true you can’t control gas prices. But you can control how you adjust your budget to find more ways to save money on gas. It’s not a lost cause! And even though these gas prices are super annoying, there’s no reason to lose your hope here. Shocker, we know. You won’t find that headline running on the nightly news.

As much as we all want to run up to the sign at the gas station and roll back those killer prices, we can’t. But there’s still something you can do about it.

How to Save Money on Gas (Despite High Prices)

Do the insane gas prices stink? Yep, they sure do. But guess what? We’ve been here already, folks. Gas has cost an arm and a leg before, and we’ve all gotten through it. And we’ll do it again. But here’s the deal—you’re going to have to adjust some things in your budget to make this work. Don’t let that get you down! There are a lot of ways to save money on gas. Here are a few to get you started:

You can sign up for gas rewards programs at places you already shop, like Kroger and Costco (just make sure they’re free rewards you’re signing up for and not credit cards). And don’t forget to check out cash-back apps like GetUpside to score some extra cash in your pocket every time you fill up at the pump.

2. Use apps to track the cheapest gas prices.

Have a bunch of errands to run this week? Knock them all out in one trip instead of making eight different trips to the store during the week. It’ll save your sanity and your gas tank.

Okay, carpooling gets a bad rap sometimes, but hear us out here. Carpooling to the office, to school or to the kids’ soccer game is a great way to build some human connection while saving money on gas too. You can’t beat that!

And if you’re usually barely conscious during your morning drive or hate fighting traffic, having someone else drive a day or two a week is a nice break. It’s kind of like having a chauffeur (without the black suit and hat).

Here’s the thing: With gas prices going sky high, you’ll have to move some things around in your budget to make it all work. Sure, it’s a bummer, but it’s not the end of the world. You’ve got this! All you have to do is cut back in a few other places in your budget to beef up your gas line item.

That might mean you skip a couple of the fancy coffees you like to treat yourself to on Friday or hold off on buying that new dress until next month—and that’s okay. Move things around until you feel like your budget’s in a good spot.

Our free budgeting app, EveryDollar, makes it easy to adjust your budget on the fly when things change (you know, like when gas prices go up). Take all the guesswork out of budgeting for your next tank of gas and get the peace of mind you need.