There’s no getting around it: 2022 has been a rough year for investors. Between Russia’s invasion of Ukraine, out-of-control inflation and rising interest rates, the S&P 500—which is used to measure the health of the economy as a whole—is down more than 20% in 2022.1

This recent downturn—and what might be coming—is making a lot of people really nervous about their investments . . . maybe you’re one of them.

Listen, stock market ups and downs are tough for anyone who’s building wealth for the future. In the midst of a market dip, it’s easy to get caught up in waves of emotion. Fear and worry can lead to panic—which could cause you to make serious and costly mistakes.

But to be a successful investor, it’s important to know how to deal with the emotional side of investing so you can avoid making mistakes in times like these—and avoid losing thousands of dollars in the process.

Most of us remember (but probably want to forget) the Great Recession. Many folks saw their retirement account balances tumble at a dizzying rate too. But if those tough years taught us anything, it’s how important it is to keep a level head and keep a long-term perspective when the market turns south.

Market chaos, inflation, your future—work with a pro to navigate this stuff.

Let’s hop into a time machine and turn the clock back to October 2007—about one year before the global economy crashed. Flo Rida is celebrating the release of his new single “Low,” which goes on to become Billboard Song of the Year. The Red Sox win another World Series. And Bee Movie is about to hit theaters nationwide (. . . it was a slow month at the box office).

But most importantly, the S&P 500 Index—which is used to measure the health of the economy as a whole—hit an all-time high of 1,565.15 that month.2 Times are good! That’s especially true for our friend John, who currently has $400,000 sitting inside his 401(k).

And then, in the fall of 2008, the crash happened. The housing market collapsed, Lehman Brothers went bankrupt shortly after that, and the Great Recession reached a fever pitch. When the smoke cleared, nearly $8 trillion of value was wiped out from the stock market between late 2007 and 2009.3

But while the world around him is panicking and everyone is pulling money out of their 401(k)s and IRAs to put into “safer” investments, he takes a deep breath and stays calm. He knows that investing in the stock market is like riding a roller coaster—the only people who get hurt are the ones who jump off before the ride is over.

And slowly but surely, over the course of several years, the stock market begins to recover. In March 2013, exactly four years after hitting bottom, the stock market fully recovered what it had lost and passed the all-time high set back in October 2007. . . and it kept on rising!5

Fast forward to the end of 2021 and the S&P 500 now stands at (drum roll, please . . . ) 4,766.18!6 Since John didn’t panic and simply left his money alone, he now has $1.2 million in his retirement account. That’s right, he tripled the money he had at the pre-recession peak—and he didn’t have to invest another penny to get there!

John avoided a mistake that millions of investors make whenever the market starts to go down: draining their retirement accounts at the very bottom of the stock market. Don’t do it, folks!

As long as you leave money inside your account, you haven’t “lost” anything. It’s only when you panic and take all your money out that you’ve locked in your losses. And that’s a mistake that could have cost John—and you—hundreds of thousands of dollars in the long run. Maybe more.

Here’s some advice to help you avoid making those same mistakes in the future.

1. Don’t bail on your investments.

When your retirement balance starts dropping, your knee-jerk reaction might be to protect the money you still have by getting rid of your "risky" mutual fund investments and moving your money to something "safe" until the market stabilizes.

But it’s impossible to predict the market’s future. When investors try to time the market this way, they generally end up losing more money than if they’d left their investments alone as they ride out the roller coaster. 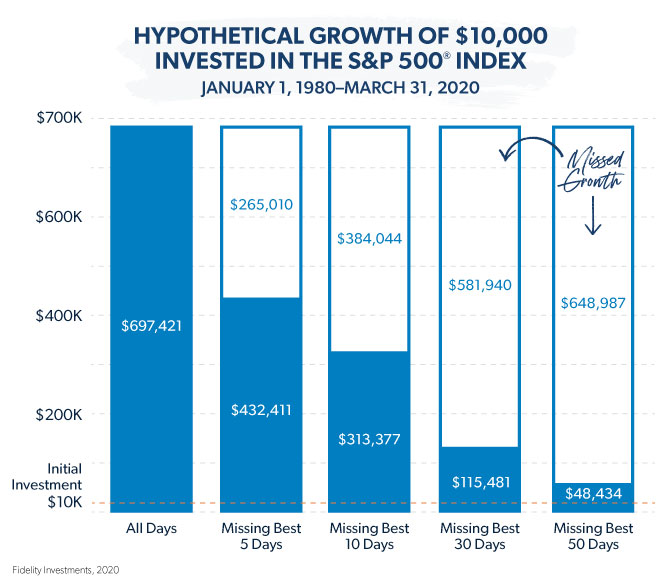 Remember, retirement investing is a marathon, not a sprint. It took the average Baby Steps Millionaire about 20 years from the beginning of their financial journey to reach a million-dollar net worth. That means it takes years of financial discipline and investing consistency—no matter what’s happening with the stock market—to build sustainable wealth. You really need to approach it as a long-term process.

Listen up, people: Don’t focus on day-to-day or month-to-month losses. Take a step back and look at the big picture. Hang on to your mutual funds through rough markets. When they rebound, you’ll be glad you did.

2. Keep investing—especially when the market is down.

Thanks to inflation and other economic worries, more than half of Americans (54%) have stopped or cut back on saving for retirement altogether.8 That could be a huge mistake.

Listen, no one likes losing money. But it’s important to keep investing money even if the market is dropping. Seems backwards, doesn’t it?

Think of it this way: When the market drops, your mutual fund shares are on sale—you’re getting them for a lower price because the market is down. It’s the time to buy—not sell. If you need a new couch, saw one for sale a month ago for $700, and it’s on sale right now for $400 . . . that’s a pretty good deal!

And that’s not all. Historically, the stock market has always recovered its losses. Sometimes in a day. Sometimes in a week. Sometimes in months or years. But it always has. And when the market does go back up, so will the value of your mutual funds.

3. Talk with an investment pro before making big decisions.

We’re all human. That means we all let emotions get the best of us from time to time. It happens. But when you start making decisions based on feelings instead of facts, that’s when you really start getting into trouble.

The best way to keep things in perspective—and to keep your investments on track—is to work with an investment professional. Having a pro in your corner can help you keep a cool head and remind you to stay focused on your long-term goals.

Don’t have an investment pro? The SmartVestor program can help you find pros in your area who can educate and empower you to make smart decisions about your investments.