Talk of a recession has been in the news lately—there’s no way to miss it. Headlines about falling stock prices and inflation put us all on edge. We get it.

But before you climb into your bunker, let’s talk about exactly what a recession is and why it may not be as scary as the news makes it sound.

What Is a Recession?

The most common definition of a recession is that gross domestic product (GDP) has declined for two quarters. GDP is the total value of all goods and services produced within a country (we’ll talk more about that a little later).

The National Bureau of Economic Research (NBER) defines a recession as “a significant decline in economic activity that’s spread across the economy and that lasts more than a few months.”1

That probably sounds like a bunch of gobbledygook. So in non-professor terms, a recession is when the economy goes down in the dumps for six months to a year. This usually means the stock market tanks, companies lose money (or go bankrupt), and people lose jobs.

The NBER is responsible for declaring a recession, and it monitors all kinds of data, like personal income, employment, consumer spending, wholesale-retail sales, industrial production and GDP. The NBER’s declaration can lag several months behind when the economy is actually in a recession.

But hey, if you’re older than the World Wide Web, you’ve lived through at least two or three recessions. And you survived! So don’t freak out. Recessions suck, but they aren’t the end of the world.

So, let’s take a look at what causes a recession.

What Causes a Recession?

In the last 75 years, America has had long periods of economic expansion compared to the length of its recessions. The average length of the 13 recessions since World War II is 10 months.2

The economy can fall into a recession for lots of different reasons, but here are some common ones:

Just like your car, the economy can get overheated when you keep the pedal to the metal. The classic symptom of an overheated economy is inflation. Hmm . . . sound familiar? Yep, the U.S. currently is experiencing its highest inflation rate in about 40 years!3

But just because the U.S. has symptoms of being overheated, there are other factors at work. Like, how about a global pandemic that shuttered businesses, broke supply chains, and led to unprecedented government spending? See, it’s complicated.

That leads to the next cause of recessions.

When the whole world shut down in 2020 due to COVID-19, GDP dropped by almost 37% in two quarters and unemployment skyrocketed.4 But as serious as things seemed at the time, the 2020 recession only lasted two months, making it the shortest in history.5

Over the last 50 years, oil prices have played a role in several recessions. The Arab oil embargo of 1973–1974 quadrupled oil prices, pushed up inflation, and helped trigger a recession.

Wars are another type of economic shock that can cause a recession. Sometimes, a foreign war can lead to worldwide disruptions. Russia’s war with Ukraine has caused gas prices to jump worldwide (but they were already at historic highs).

An asset bubble occurs when people are so excited to invest in certain assets (like stocks, bonds and property) that they drive the price way above the actual value. Eventually, the bubble bursts, people start selling, and the value of the asset takes a nose dive. This causes big losses for investors and businesses that can spread to the entire economy—and that’s what happened during the Great Recession of 2007–09.

During the Great Recession, an asset bubble in the U.S. housing market burst and sent the country spiraling into a recession that lasted 18 months—the longest period of economic decline since the Great Depression. A massive number of houses went into foreclosure, the U.S. government spent hundreds of billions of dollars bailing out banks and other companies to keep them from going bankrupt, and unemployment reached 10%.6

What Are the Signs of a Recession?

Recessions are tied closely to a decline in gross domestic product (GDP). So to understand a recession, you’ll need to learn a little about GDP.

GDP is the total value of all goods and services produced within a country during a specific time period. U.S. GDP has a long history of upward growth—normally 2% to 3% a year.7 But if GDP declines for two or more quarters, the recession alarm starts going off.

So, here’s the bad news: GDP was -1.6% in the first quarter of 2022 and -0.6% for the second quarter.8 9 Yep, that meets the technical definition of a recession. But GDP bounced back into positive territory in the third quarter (2.6%), which means we aren’t in a recession anymore.10 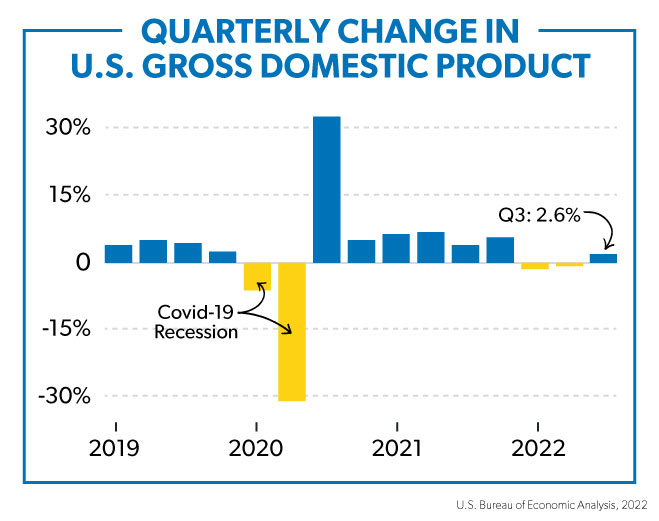 How Do Economists Predict a Recession?

The question isn’t if but when we’re going to have a recession—because recessions are a normal part of the economy. Yep, you have to have some down times to enjoy the rosy times. And because it’s bound to happen at some point, make sure you know what to do with your money in a recession.

The truth is, recessions are incredibly hard to predict. Even bigwigs at giant banks disagree on the state of the economy.

Maybe you’ve read depressing reports that the yield curve for 10-year and 2-year U.S. treasury bonds is inverted, and that predicts a recession. First off, if you have no idea what that means, join the club! It’s a complicated topic, but here’s a little overview.

So, what’s the deal? It has a lot to do with psychology. (We’re covering all the social sciences today!) When investors worry about the stock market taking a downturn, they’ll often move their money out of stocks and into long-term bonds. This causes the price of bonds to increase and the yield to decrease. The Federal Reserve’s actions on interest rates also affect the yield curve.

The stock market doesn’t react well to uncertainty, and we’ve had a lot of that lately.

When investors sense danger coming, they run to safety as quickly as possible. That means selling stocks before the price falls. And when lots of investors get scared and start selling their stocks, prices fall.

Rising unemployment is a sign that a country is in a recession. When businesses are hurting, they don’t hire new people and they have to let people go.

The good news here is that unemployment is almost back to its pre-pandemic level. October’s unemployment rate was 3.7%, just a little higher than February 2020.11

The Federal Reserve is the U.S. central bank that creates money and sets interest rates. Its mission is to make sure the economy runs smoothly—keeping inflation low while maintaining low unemployment.

The Fed has been boosting interest rates to fight inflation, but the problem is that raising interest rates can hurt GDP and push the economy into a recession. Yep, they’re stuck between a rock and a hard place.

What Is the Difference Between a Recession and a Depression?

The United States has had many recessions in its history, but only one was so bad that it became known as the Great Depression. It lasted from 1929 to 1939. The Great Depression started as a normal recession, but then the stock market crashed and eventually lost 80% of its value.12 Banks failed. And millions of people lost their jobs. (Unemployment topped out at 25%.13)

There isn’t a solid definition of a depression. It’s just a really long and painful recession.

In 2002, Fed Chairman Ben Bernanke admitted that the Fed’s actions during the Great Depression actually made it much worse.14 That’s a scary thought.

Just for the sake of comparison, GDP fell by 29% during the worst part of the Great Depression, and it fell by 4.3% during the Great Recession.15,16

Most of us haven’t seen anything like the Great Depression in our lifetimes—and we probably won’t. So there’s no need to start hoarding canned goods or burying money in your backyard.

What Happens in a Recession?

A recession is kind of like a tornado. You hear warnings, but it’s hard to predict when it’ll hit and how severe it’ll be. Sometimes, it doesn’t even hit at all—but you still prepare for it. Just like you prepare before a recession hits. Where tornadoes smash homes and knock down trees, recessions cause people to lose jobs, businesses to lose money or go bankrupt, and stock prices to fall.

You might not personally feel the effects of a mild recession—though you’ll definitely see it in the news 24/7. But a moderate or severe one will definitely get your attention.

Take Control of Your Money

Here’s the deal: Recession or not, there’s no time like the present to take control of your money. Not sure where to begin? Take our flagship course, Financial Peace University, to learn how to build an emergency fund, get out of debt, and win with money. If you’re looking for a simple way to budget, check out our EveryDollar app.