If you’re a teenager trying to stay on top of your grades and figure out who you’re going to ask to prom, just the thought of becoming a millionaire sounds like a far-off dream, right? It might even seem impossible—like trying to convince your parents that a brand-new sports car is a perfect first car for a high school sophomore (good luck with that!).

But guess what? Reaching millionaire status is actually more realistic than you might think. That’s right, you (yes, you) can become a millionaire someday. And if you’re already asking questions about what you need to do to get there before you even have a high school diploma, congrats—you’re way ahead of the game!

You might not realize it, but the choices you make today will have a huge impact on where you’ll end up years from now. It’s going to take some hard work, but reaching the million-dollar mark is possible. Here’s how!

Here’s a little secret: Compound growth, also called compound interest, is a millionaire’s best friend. It’s the money your money makes. Seriously. But don’t take our word for it—let us introduce you to our friends Jack and Blake and tell you about their adventures with compound growth.

How much will you need for retirement? Find out with this free tool!

So at age 68, who do you think had more money in their account? Let’s do the math.

So how did Jack do it? He didn’t invest nearly as much as Blake did but ended up with over $1 million more. Compound growth can turn more than $20,000 invested in nine short years into almost $2.35 million over 38 years! Try our compound interest calculator that will do the calculations for you. 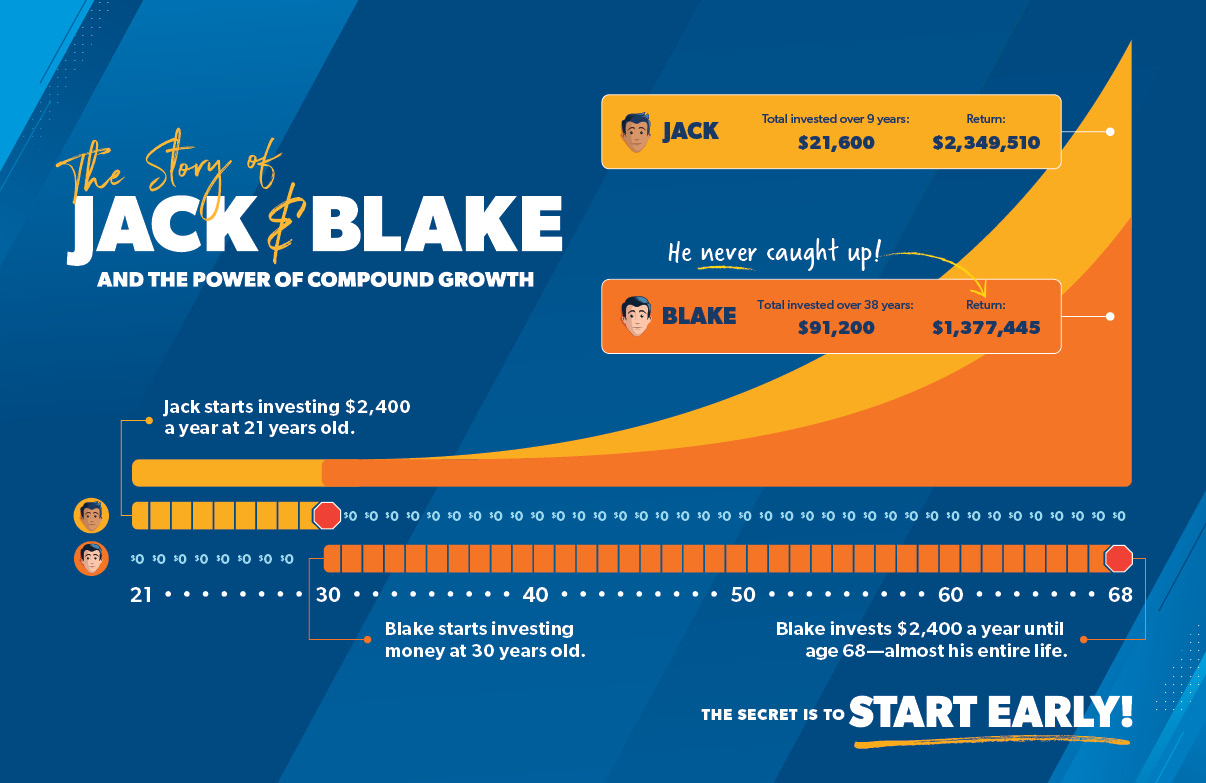 You Can Be a Millionaire

When you think of the word millionaire, what comes to mind? An older couple zipping their way up the coast to their summer beach home? Superstars like Jay-Z and Beyoncé with their cool clothes and private jet?

We get why you might think that at first. But guess what? There are 22 million millionaires all over the country, and most of them probably look more like that nice couple next door than the “Queen B” herself!1

Here are some fun millionaire stats from The National Study of Millionaires that will bust the image you might have of what a millionaire is:

The big takeaway is this: Anyone in America can become a millionaire. And the earlier you start, the better. In fact, the study found that “if members of younger generations are diligent over time, they can become net-worth millionaires in their own right.” It’s time to get started!

On top of compound growth, you have another advantage your parents and teachers don’t have: more time. You see, time and compound growth go together like Taylor Swift and catchy song lyrics. Together, they can make you a millionaire!

But the decisions you make now while you’re still in high school and once you’re in college will either set you up to build wealth quickly or set you back years financially. Here are some things you can do right now to set yourself up for success.

You can choose to not go into any debt—not even for college. That decision alone will put you light-years ahead of your peers by the time you graduate.

Think you might want to go to that fancy private school? Think again. Sure, you might look good when you’re wearing the sweatshirt, but is it really worth it? (Trust us—it doesn’t matter as much as you think it does.) The worst thing you can do to your future is get buried in payments before you’re even out of your parents’ house!

Here are just a few ways you can get ready to pursue a debt-free degree right now:

We believe in you (and your future). Don’t get caught up in the lie that the only way to go to college is with debt. You can chase after your dreams while leaving student loan debt in the dumpster.

Our documentary Borrowed Future uncovers the dark side of the student loan industry and shows you how you can forge a better path for your future—one that doesn’t include graduating with a mountain of student debt. Watch it today!

2. Stay Away From Credit Cards

Once you step onto a college campus, get ready. You’ll be bombarded by grinning credit card representatives trying to convince you to fill out credit card applications in exchange for a free t-shirt or a slice of pizza. This is a trap, people! Run (don’t walk) in the other direction!

The sad part is that many teens fall for this schtick and end up creating a financial mess for themselves. More than half of college students (53%) are using credit cards to buy stuff, and about 40% say they currently have at least $1,000 in credit card debt and 14% say they already have a balance of more than $5,000.2 That’s just dumb.

Don’t jeopardize your financial future by buying stuff you can’t afford to impress people you barely know. It’s not worth it.

3. Live on Less Than You Make

The struggle of the broke college student is real. We get it. But you don’t get a pass on being financially responsible just because you’re in college. You can still have fun in college—just be smart about it!

Now is the time to learn how to make a budget and stick to it. Making a budget might sound boring and restrictive, but a budget doesn’t take away your freedom—it gives you freedom to give, save and spend how you want to.

Some of your classmates might post about buying cryptocurrency on social media or try to convince you to get in on the ground floor of some exciting “investment opportunity.” Don’t take the bait!

Millionaires see investing as the primary tool for building wealth and securing financial peace. They keep things simple, save consistently, and stay away from big risks.

Here are the facts: 80% of millionaires say that investing in an employer-sponsored retirement plan like a 401(k) was the main way they reached millionaire status.3 Meanwhile, 74% mentioned investing outside the company plan, and 73% said the habit of saving money regularly was a key factor.4

For now, focus on graduating college debt-free—no student loans, credit card debt or car payments. Once you’ve started your career and are ready to get started with investing, make sure you connect with a financial advisor—someone who can teach you all about investing and help you pick and choose the right investments for your portfolio. Our SmartVestor program makes it easy to find qualified investment professionals who can serve you.

If you want to win with money, you have to have a plan. And the plan that has helped folks all over the country build wealth and become millionaires over time is Dave Ramsey’s 7 Baby Steps. This is a plan that works!

What exactly are those Baby Steps? We’re glad you asked! Here they are in order:

As you probably noticed, there are some steps on there you might not be ready for yet. And some you can skip completely—like debt! Like we said before, your goal right now is to make sure college is paid for. And since you’re still living under your parents’ roof, a $500 emergency fund will be enough for now. If you’ll spend the next few years focused on those goals, nothing will hold you back from building wealth like a millionaire!

Want to learn more? Dave's new book, Baby Steps Millionaires, will show you how millions of Americans have become millionaires—and how you can become one too! Grab your copy today to learn how to bust through the barriers preventing you from becoming a millionaire.