What Are Trauma Responses?

Whether you realize it or not, your body keeps tabs on everything, all the time, like a vigilant surveillance system. This system was designed to deal with the occasional lion or bear that stumbles into our prehistoric caves. But as Dr. Burke Harris notes in The Deepest Well, our bodies don’t have a way of dealing with the bear when it’s sleeping in the same home as us or showing up at our cubicle every day. When stress is chronic, our bodies devour themselves over time.

In her book, Trauma and Recovery, Dr. Judith Herman says trauma responses feel like this: “In the state of hyperarousal, the traumatized person startles easily, reacts irritably to small provocations, and sleeps poorly.”

In other words, when faced with something your body perceives as a threat—even if it’s not actually a threat—it wants you to run. Or throw some punches. Or just lock up and freeze until the threat passes. And everyone responds to threats in their own unique way.

So why do these trauma responses happen? Let me break it down for you:

•  There’s a part of your brain called the amygdala that helps regulate your body’s stress responses. This includes dumping hormones like adrenaline and cortisol into your bloodstream to prime your body for fighting or running from danger. The amygdala identifies threats even before we have the chance to consciously think about it.

But sometimes, this part of the brain can be like a screaming kid. That’s because your amygdala doesn’t stop to process information—it just impulsively responds to threats kind of like a kid does when feeling scared or hurt or overwhelmed.

•  You also have something called a prefrontal cortex that’s responsible for controlling memory checks, cognitive flexibility (the ability to think about two things at once), impulse responses and your thoughts. Think of the prefrontal cortex as the rational decision-maker. The mature one. The adult in the driver’s seat.

•  Something else to know about the brain is that it’s always asking three questions: Do I belong? Am I safe? Does this feel good (or is it painful)? 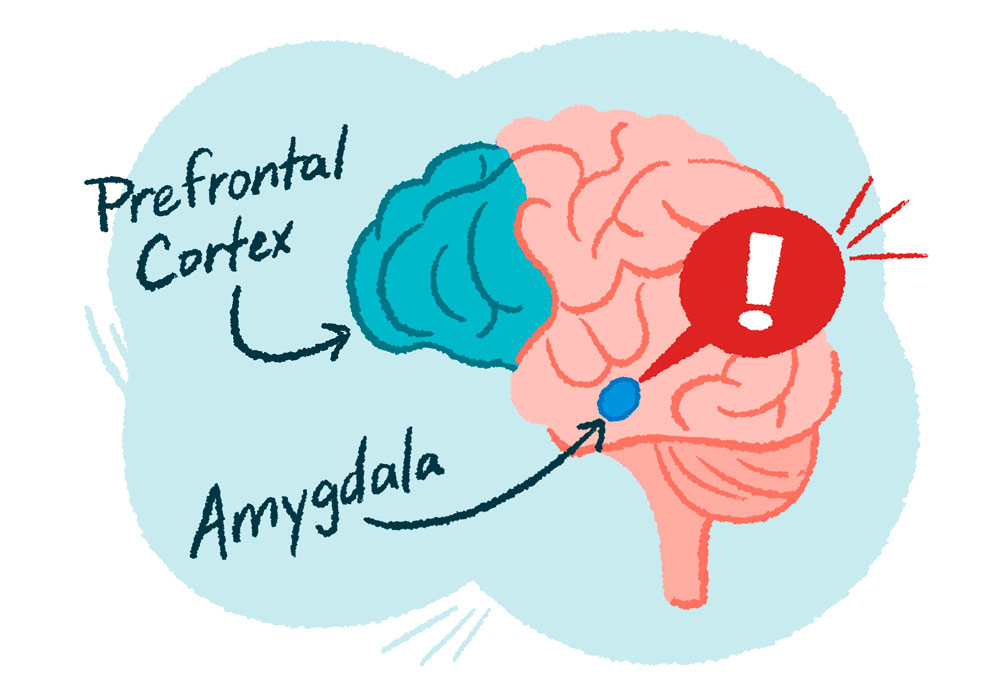 •  Then, when we’re met with a situation where the answer to one of those questions is no—or we think the answer is no because of our trauma—the amygdala detects the potential threat and takes over, and the prefrontal cortex conveniently goes offline (to put it simply). Our brains then trade accuracy for speed, which means it would rather us detect a threat and be wrong than not detect a threat and be dead.

That leaves the screaming child sounding the flight, fight or freeze alarm in charge, and the rational decision-maker gets pushed to the back seat.

Here's an example of how trauma responses might play out: If you experience a devastating wreck involving a large red truck, your amygdala may flag large red trucks as dangerous. Every time you see a large red truck in your rearview mirror, you may start sweating, feel queasy, or get angry for no reason.

Thankfully, there are ways to regulate your body’s trauma responses and keep the rational decision-maker in control, but first let’s talk about a few more trauma response disorders that are important to be aware of.