The year is winding down, but the busy holiday shopping season is still ahead. The latest quarterly release of The State of Personal Finance study from Ramsey Solutions digs into the pain consumers are feeling from rising inflation and what that means for their upcoming holiday spending. The study also explores shoppers’ plans for big sales days like Black Friday and Cyber Monday and how their attitude around these events and their “can’t miss” deals may be shifting.

We’ll also take a look at how Americans are engaging with new products and services in the financial landscape like buy now, pay later services and cryptocurrency.

Consumers Feel the Pain of Inflation in Their Pocketbooks

Prices for consumer goods have been rising throughout the year. Americans have faced inflation as high as 5% in 2021, and it’s not going unnoticed. The majority of Americans (79%) say their money doesn’t seem to go as far as it used to, and eight in 10 have experienced higher prices on the things they normally buy in the last three months. Consumers are seeing these increases the most on everyday items like groceries (82%) and gas (66%). But inflation’s reach goes beyond that with nearly half (48%) of consumers seeing higher prices on household goods, 38% on clothing, and 19% on furniture. 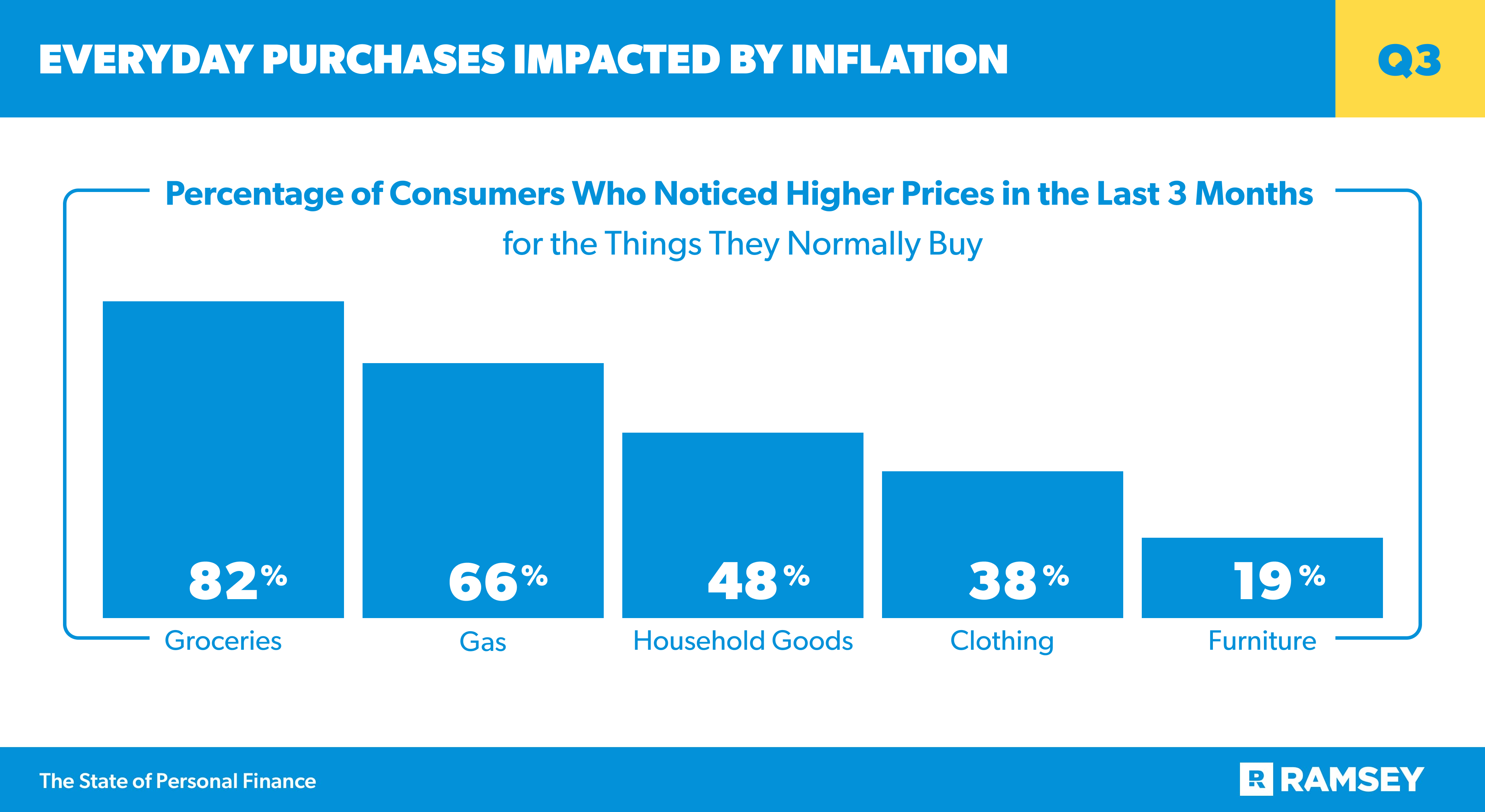 With consumer prices on the rise across the board, consumers will have to increase their income or tighten their budgets. Many will face hard choices as we head into the end of the year and the busy holiday shopping season. 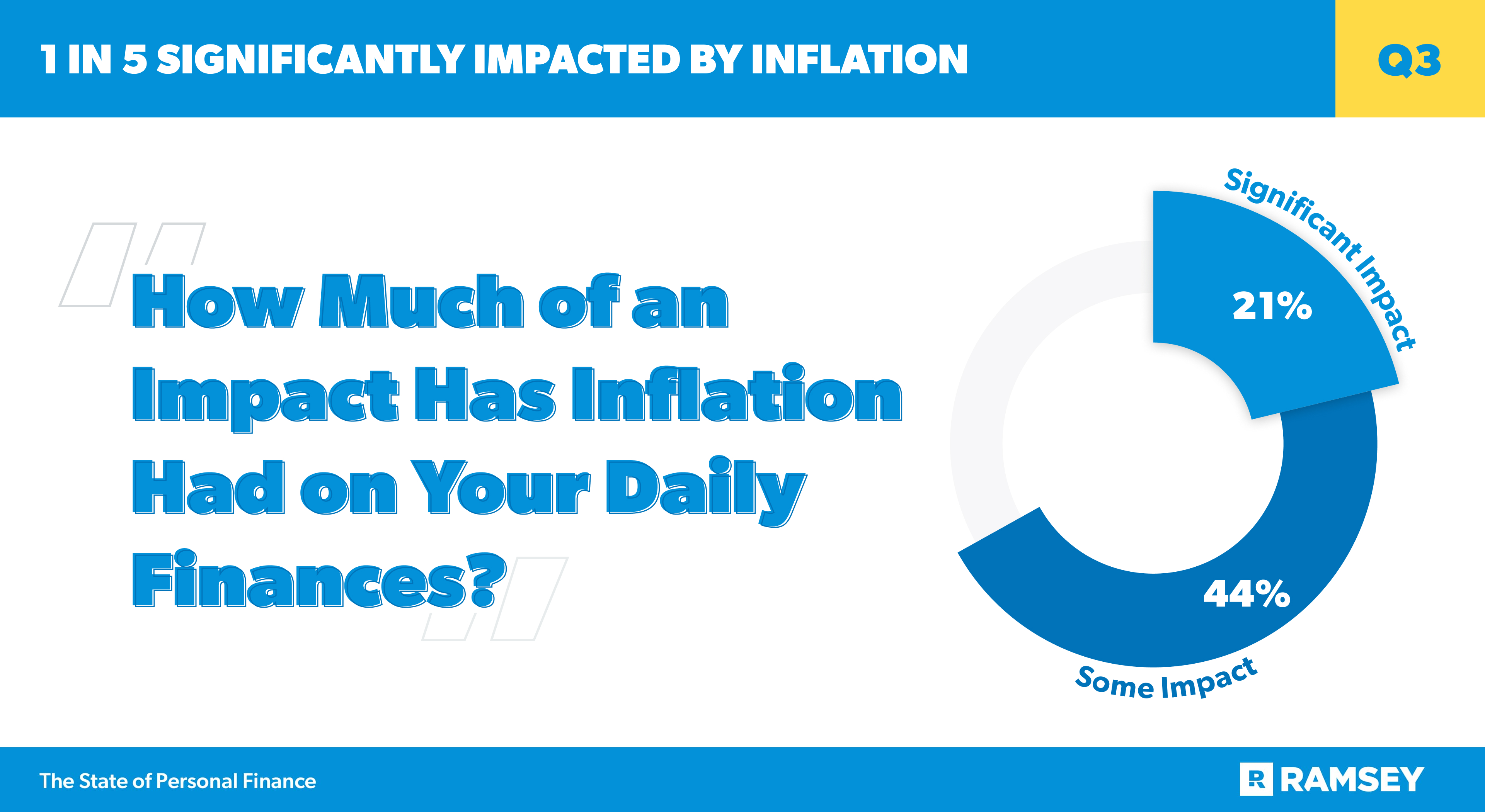 One-Quarter Plan to Spend More on the Holidays This Year

With the year’s biggest shopping season right around the corner, many Americans are already making their holiday spending plans. Four in 10 expect to spend on Thanksgiving, 68% are planning to spend on Christmas, and one in five will spend on New Year’s Eve. On average, they’re planning to spend $216 on Thanksgiving and $641 on Christmas. For Thanksgiving, the top expenses are decorations and gifts. While at Christmas, not surprisingly, gifts are the top expense, with decorations and candy rounding out the top spending categories.

And after a pared-down holiday season last year, one in five say they’ll spend more on Thanksgiving than they did last year, while 25% are planning to spend more on Christmas this year than last year. With the holiday shopping season starting earlier and earlier every year, many shoppers are getting an early start on holiday budgeting as well. More than a third (35%) say they start saving for their Christmas or holiday spending by September. However, on the other extreme, nearly three in 10 (29%) don’t plan ahead at all for their holiday spending. 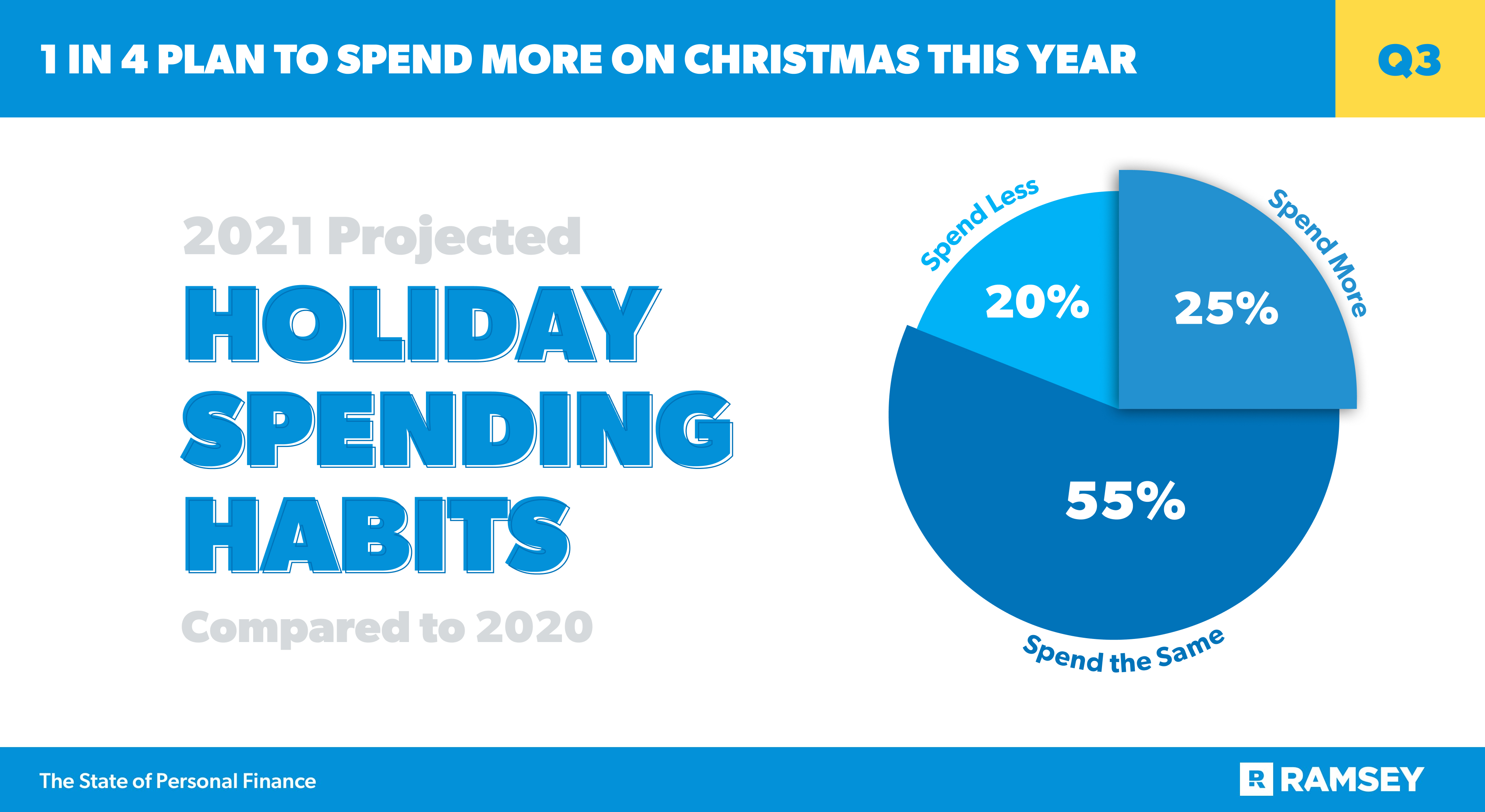 Technology Is the Top Category for Black Friday Deals, but the Majority Don’t Think Those Sales Are Unique

But while Black Friday and Cyber Monday are best known for their deeply discounted items and crazy sales, those offers aren’t always best for shoppers and their budgets. In fact, the research shows that many let the frenzy of those shopping holidays get away from them. Forty-two percent (42%) of Black Friday and Cyber Monday shoppers admit that they often get sucked in by the deals and end up buying more than they originally planned. Another 37% say they regret purchases they’ve made on Black Friday or Cyber Monday in the past. Consumers need to make a holiday shopping plan and stick to it to avoid money regrets as they head into the season.

The research also shows that the power of these holiday shopping events may be decreasing in the eyes of consumers. Six in 10 feel like Black Friday and Cyber Monday deals aren’t any better than other sales throughout the year. Educated consumers are beginning to see through some of the gimmicks of these big holiday sales promotions and make smarter choices with their finances. 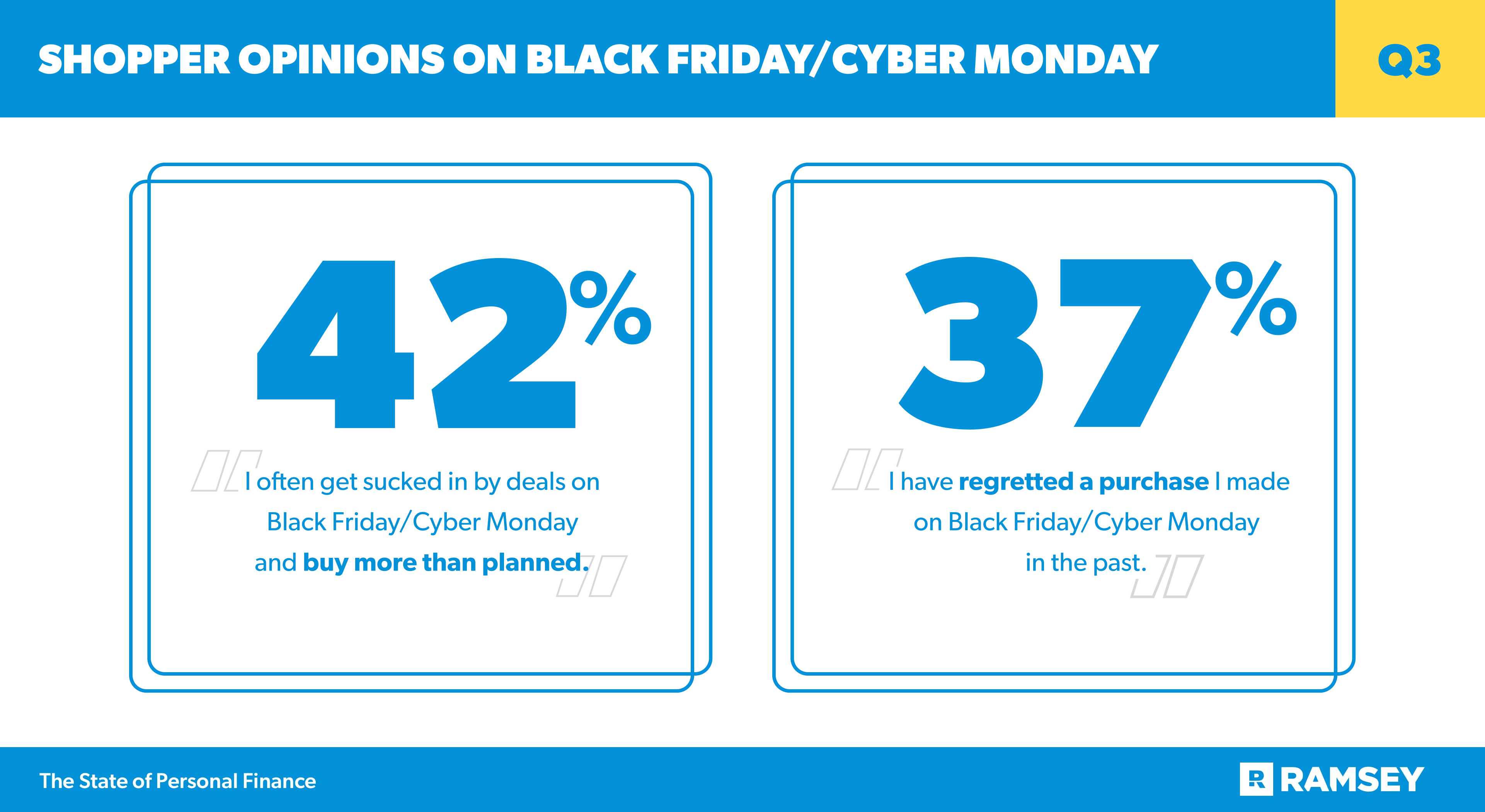 Another shift in consumer habits shows that buy now, pay later (BNPL) services are becoming more common. Nearly one in four online shoppers have used a BNPL payment service like AfterPay, Affirm or Klarna in the last three months. BNPL services allow shoppers to split the cost of an item into several payments made over time. But the data shows that the majority of those who use these services have missed a payment. Of the 22% who used a buy now, pay later service in the last 90 days, 74% have missed a payment in their payment plan. 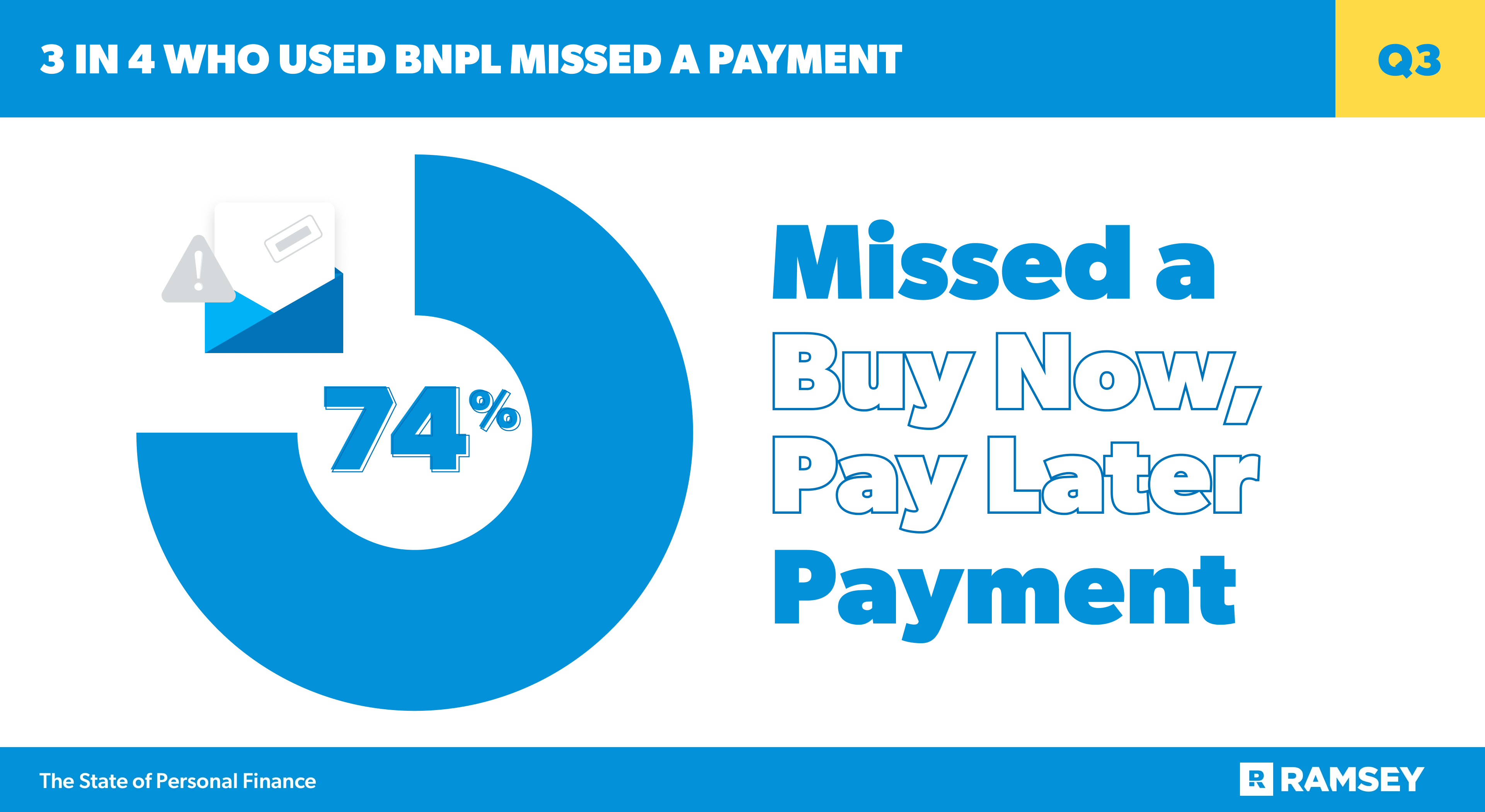 Many Are Curious About Cryptocurrency but Still Hesitant to Get Involved

The buzz around cryptocurrency continues to build, with more and more retailers accepting it as a form of payment. However, many Americans are still clueless about this complicated new market. Twenty-seven percent (27%) say they have no idea what cryptocurrency is, while only 14% say they have a very clear understanding of cryptocurrency. 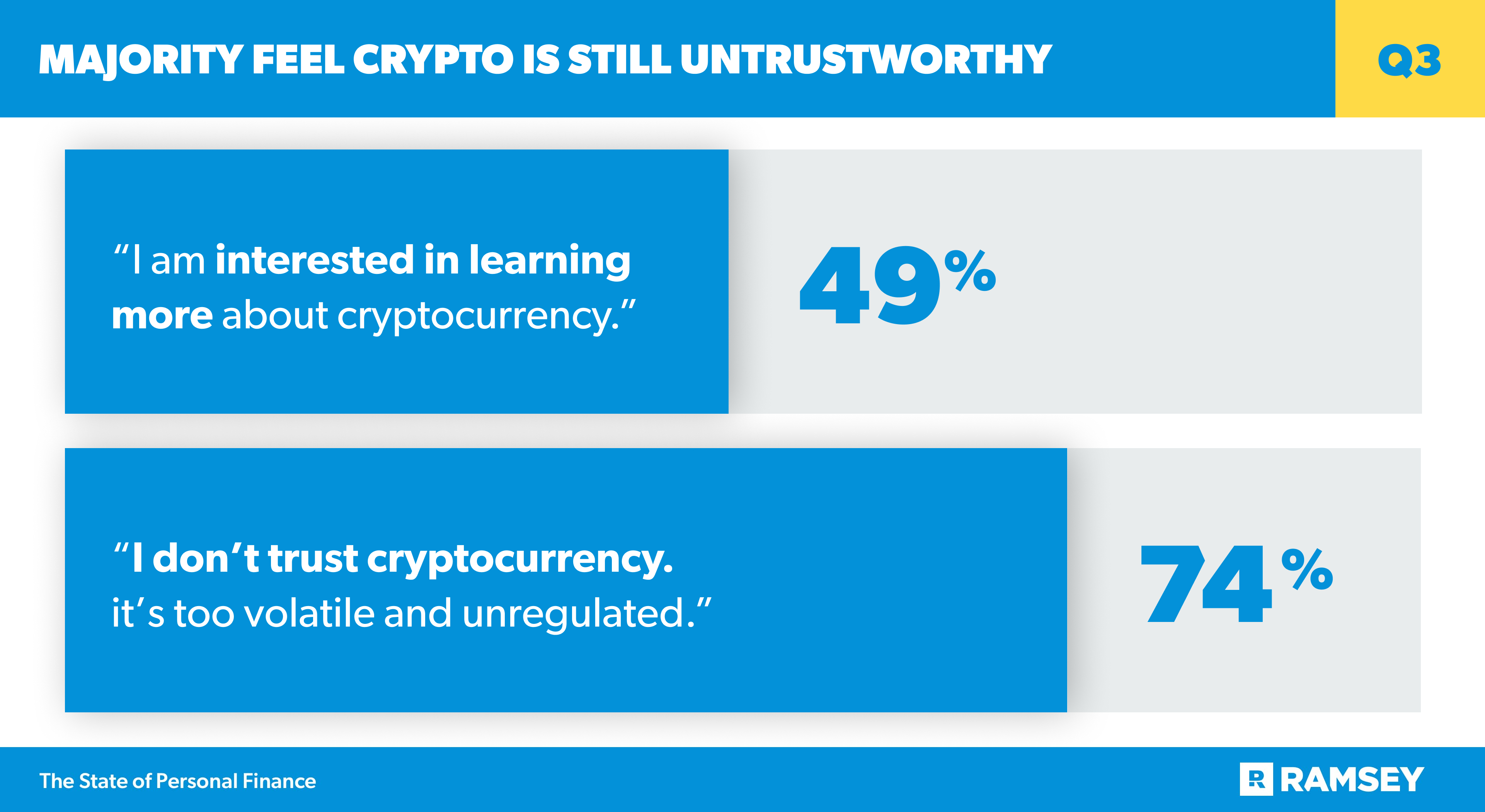 With 2021 wrapping up, Americans are facing higher prices, and people who are in debt and living paycheck to paycheck are feeling the sting the most. Even so, most people are ready to celebrate the holidays and expect to spend more than they did last year. And while many shoppers are becoming skeptical of Black Friday and Cyber Monday deals, they will still make the most of these traditional shopping days to save on holiday gifts as well as wants and needs for their own families.

Buy now, pay later options, while they appear convenient on the surface, pose the same danger as any credit-based payment method, as evidenced by the high numbers of people who miss their BNPL payments. And finally, while most people agree cryptocurrency is here to stay, many are still too wary to invest their own money into such a volatile and unregulated option.

The State of Personal Finance study is a quarterly research study conducted by Ramsey Solutions with 1,004 U.S. adults to gain an understanding of the personal finance behaviors and attitudes of Americans. The nationally representative sample was fielded September 29, 2021, to Wednesday October 6, 2021, using a third-party research panel.