Six out of 10 people don’t have a will.1 If you’re reading this, you probably don’t have one either—and you’re probably wondering if that’s the best category to be in.

The reality is, 100% of people have a terminal condition. We know that’s not a cheerful way to start off, but it’s true. One hundred percent of people are going to pass away, hopefully after a long, fulfilling life surrounded by people they love.

And that’s why a will matters—because of the people you love.

We’re going to break down exactly what a will can do to protect you, your family and your stuff, so you’ll never have to wonder, “Why do I need a will?” again.

Why Don’t I Have a Will?

Let’s start by looking at why people don’t have wills. That may seem a little backwards, but if 100% of people need wills and less than 40% of people have them, that means there are some pretty big roadblocks holding most people back.

Ramsey Solutions surveyed over 2,000 people and found that 63% of them don’t have a will. When we asked them why not, they gave us three main reasons:

Add in the fact that making a will is very emotional, and it’s easy to see why a lot of people skip it entirely. (We’d be willing to bet you saw at least one of your own excuses on that list.)

But you already know where we’re going—a will is too important for you not to have one. So let’s take a deep dive and look at what a will can do for you.

A Will Gives You Control

It’s very difficult to get through life without some sort of tragedy. A close friend passes away in a car accident. A relative gets diagnosed with cancer, even though they’re “way too young.”

Unexpected things happen—and they can happen to any of us.

A will gives you and your family a plan to deal with the unexpected. It starts by giving you control over your stuff. Stating exactly what you want to happen with the things you own protects your grieving loved ones.

It’s like a one-two punch. A will is good defense for your family because it takes away the drama of fights over your assets and potential court battles. And it’s good offense because it gives your family a game plan they can use to handle your affairs.

Even better, you get to decide what that game plan is. You can pick the executor (the person who carries out your wishes) and the beneficiaries (the people who get your stuff). So your family can move forward with confidence, knowing they’re doing things exactly how you would have wanted.

A Will Lets You Give Good Gifts

Choosing who gets what is one of the most important and well-known parts of making a will. But there’s more to think about than you might realize.

If you have some money in the bank, you can use your will to give specific amounts of it to specific people and groups.

Do you have a niece who wants to go to college to be an engineer? You can set money aside for her tuition. Does your son want to buy a house? You can give him money for that too.

Or maybe there’s a charity you really believe in and want to support even after you’re gone. A will lets you do that too. You can leave a set dollar amount or a percentage of your assets to the charity or group of your choice.

And hey, if your family is going to bicker a ton, you can just go ahead and leave everything to a charity. Problem solved!

Most people want to give their most treasured belongings to close family and friends who will cherish them too.

For example, if you bought a necklace while you were on vacation with your sister, you can leave the necklace to her in your will to let her know you valued that time together. And because you specifically named her to receive it, you know your greedy Cousin Rose can’t swoop in and take it.

You can also use your will to stomp out potential arguments before they start. If you know your brothers both want your ’69 Chevelle, your will should clearly state which one of them will get the car. Or you could even leave the car to a third party to keep your brothers from getting jealous of each other.

A Will Helps Your Family Grieve

The idea of your family fighting over your stuff may hit close to home. Or you may be thinking, My family? That would never happen! But it might.

Grief is one of the hardest human experiences to go through. It changes people and plans. According to Harvard health expert Heidi Godman, grief sets off a chain reaction of side effects that impact people emotionally, mentally and even physically.

During grief, the body releases extra stress hormones. Those hormones can cause high blood pressure, chest pain and trouble breathing. They can even make people more likely to get sick. Grief can also turn into depression—especially after losing a spouse. Some people may have trouble eating, sleeping or doing basic tasks.2

The negative things happening in their bodies and minds mean that your loved ones literally may not be able to act like themselves. Even your sweetest, most predictable relative might have trouble making good decisions.

And all that increased stress makes them more likely to take out all that stress and pain on each other, even if they don’t mean to.

Why put them through that heartache?

Making a will lets you make the decisions for them—so all your family has to do is focus on supporting each other through the grieving process.

A Will Keeps Your Family Out of Probate Court

Imagine that you didn’t make all those decisions. You didn’t give your family a game plan. You didn’t specify who gets what. (So basically, you continued down the no-will path you’re already on.)

And then, God forbid, something happened to you. Now your loved ones are grieving, they’re scared, and they’re headed for probate court.

Probate is the process of giving your stuff to the right people, paying your debts and handling other legal matters after you die. Probate court is what happens when you die without a will, which is also called dying intestate. Basically it means that since you haven’t put your after-death wishes in writing, the courts settle your estate for you.

While each state has its own intestacy laws, most courts will give half your stuff to your spouse and half to your kids. But things get more complex (and more emotional for loved ones) if you have children from a previous marriage or if you and your current partner aren’t married.

If you’re single and childless, the court will divide everything evenly between your parents and siblings—even if you didn’t get along with them or want that to happen.

This is also when your family is most likely to find themselves in legal battles over your estate. If one relative objects to how things are getting handled, the whole family could spend months tied up in the argument.

And the court has no way of knowing how you would have wanted it handled. They don’t know the big things (like who you wanted to get the house) or the little things (like who’s supposed to get Grandma Susie’s engagement ring). They’re basically playing pin-the-tail-on-the-donkey and giving it their best guess.

Simply put, not having a will means your wishes most likely won’t get carried out the way you wanted, and it can lead to family friction.

Making a will is the best way to state what you want to happen and to provide for your loved ones, instead of letting the state make that decision for you. 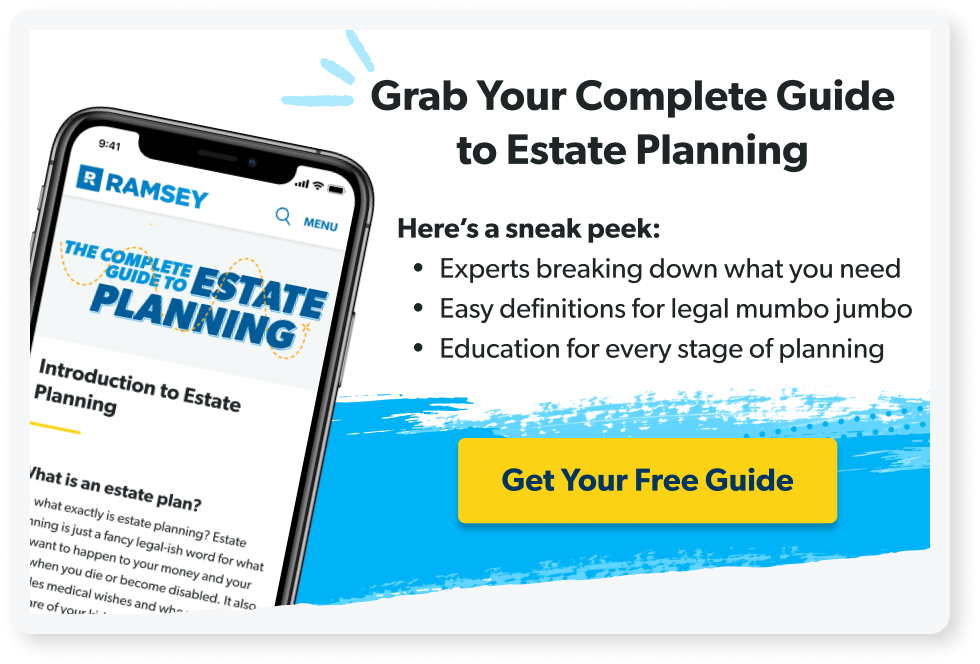 A Will Protects Your Children

If you’re a parent with children under 18 who live at home or with adult children who depend on you due to a permanent disability, you need a will. It doesn’t matter if you’re a single or married parent: You still need a will.

Even if you’re married, you can’t count on your spouse being there to take care of the kids, because there’s a chance you could both pass away at the same time. (That’s why your spouse needs a will too.)

A will is the only way to leave a plan for your children’s care. You can name someone to be their guardian, and you can leave money that’s set aside just for taking care of them.

Just make sure to talk to potential guardians first. Caring for your child is a big responsibility, and you want them to go to someone who’s prepared for it.

A Will Is Worth Having

Think back a few minutes, to when we talked about the three biggest reasons people avoid making a will. They were stage of life and the amount of time and money it takes to get a will.

Hopefully by now you know that you are in the stage of life when you need a will—whether that stage is young and single, married with five kids or enjoying your Golden Years.

But just in case you missed it, here’s a quick recap. You need a will if you:

So, if you’re over 18 and breathing (which is probably the case since you’re reading this), you need a will! And the good news is, the process of creating a will has come a long way from the days of those scary meetings with pricey attorneys.

It’s quick, easy and affordable to make your will online. In only a few minutes, you’ll get a legitimate, legally binding will—along with powers of attorney.

If you’re anything like the average American, you spend hundreds a month on entertainment. So, why not spend a small portion of that (and just once) on a document that’ll give you peace and protect your family’s future instead?

Now the question really is, why don’t you have a will? We recommend getting an online will with RamseyTrusted provider Mama Bear Legal Forms.

1According to research from Ramsey Solutions