56% of Americans Lose Sleep Over Retirement

The future keeps a lot of people awake at night: 56% of Americans lose sleep thinking about retirement, and anxiety is the top emotion sleep-deprived Americans associate with their golden years. Stress is certainly to blame in a lot of cases—but it’s not the only emotion keeping people up at night. 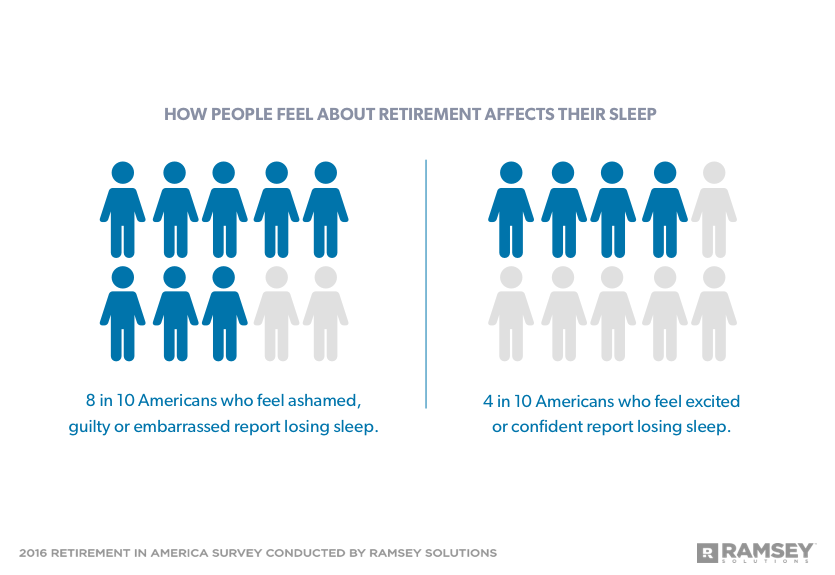 Saving more might seem like a simple solution to the sleep loss problem. However, money isn’t enough on its own to ease retirement worry. People also need a plan and a goal.

In 2016, Ramsey Solutions commissioned a survey of more than 1,000 U.S. adults to evaluate the state of retirement in America. The third in a four-part series of reports based on the survey results focuses on how thinking about retirement affects Americans’ stress levels and sleep patterns.

Although saving for retirement leads to positive emotions, like confidence, excitement and optimism, it doesn’t guarantee a better night’s sleep: 61% of active savers lose sleep over retirement compared to just 49% of non-savers. 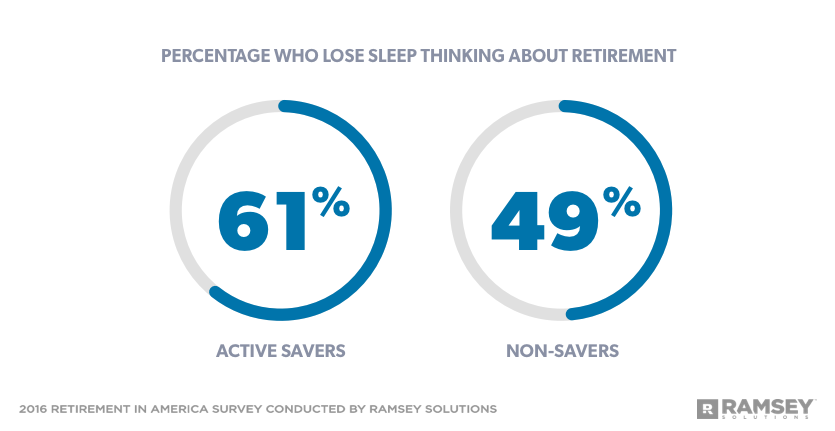 When it comes to retirement, Gen Xers are doing a lot of things right. They are more focused on preparing for their golden years than other generations and are more likely to actively save and spend time planning for retirement. Gen Xers also boast bigger nest eggs: 51% of Gen Xers have $25,000 or more saved for retirement compared to 46% of Baby Boomers.

Yet, half of Gen Xers admit they are afraid of outliving their money. In fact, Gen Xers report higher levels of anxiety and are more likely to lose sleep than Baby Boomers, despite the fact that Gen Xers have more time to save. Despite all their efforts to build a better future, Gen X is the least likely generation to know how much money they need to save to hit their retirement goals or who to go to for questions about retirement.

Gen Xers may not have 40 years to build a big nest egg, but there’s still time to meet their goals if they work hard. A 40-year-old who has $25,000 saved today could break the $1 million mark by contributing $875 a month to their retirement account for the next 25 years.[1]

Retirement concerns have a negative impact on sleep: 74% of Americans who are very concerned about their future lose sleep compared to just 17% of those who have no concerns at all. Taking steps to improve retirement confidence can reduce those concerns, resulting in better sleep. 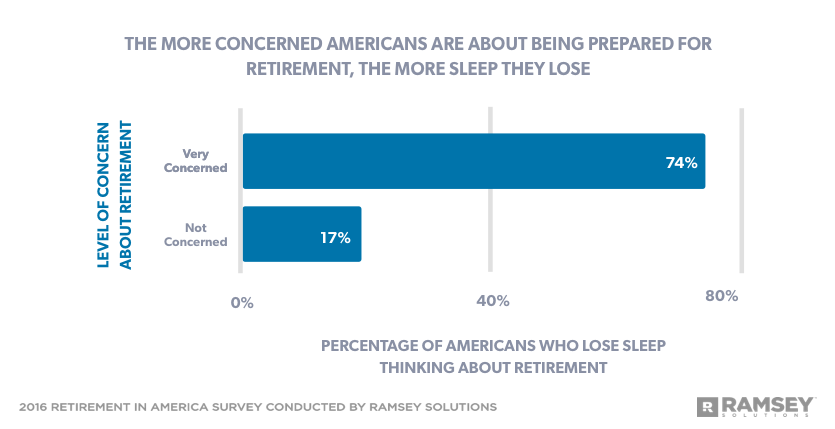 Americans with $100,000 or more in their nest egg are most likely to say they feel confident about retirement. But while confidence may start with saving, it doesn’t end there. One key difference that sets confident Americans apart from the rest is the simple fact that they keep their eye on the ball. Nine in 10 people who feel good about their future say they are focused on preparing for retirement.

Retirement confidence doesn’t happen by accident. A lot of people put retirement on autopilot, thinking it will take care of itself, and then wonder why they feel so stressed. Those who work hard day in and day out to move their future forward look to retirement with much more confidence.

Americans Who Have a Retirement Plan Feel Better About Their Future

Savers who feel anxious about retirement report a lack of planning and procrastination as their top saving barriers, while non-savers with anxiety are too focused on their kids to put money aside for the future.

It’s no surprise that confident Americans are the most likely to say they spend time working on a plan for retirement. As a result, they have a clear vision for their future. People who associate confidence with retirement are most likely to have specific retirement goals and know what steps they need to take to reach them. 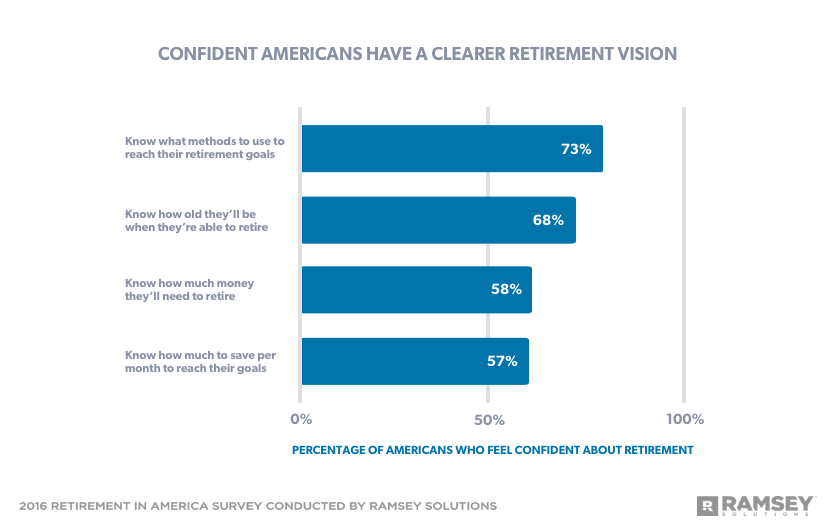 Having a plan matters. When people know how much to save each month, where that money is coming from, and what investing methods they’re going to use to reach their goals, they will feel more confident in their retirement plan.

People don’t have to focus every minute of every day on retirement to enjoy the positive benefits of planning ahead. Americans who think about retirement, their retirement goals, and/or their retirement plan about once a week report the highest levels of confidence. 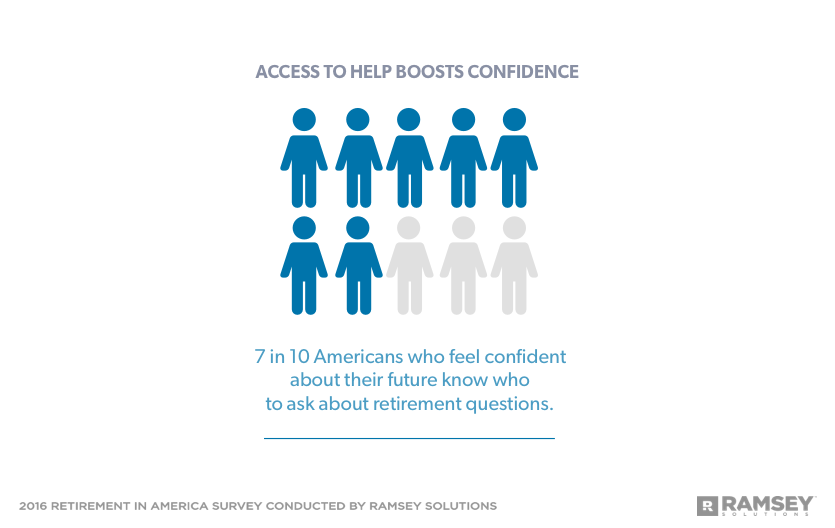 Everyone has regrets when it comes to their finances, but people ofen let their financial mistakes prevent them from moving forward. It’s important for people to remember their past mistakes so they don’t make them again. But they shouldn’t let those mistakes hinder their financial future.

No matter what financial position a person is in, it’s important to work with a financial advisor who has their best interest in mind—someone who will take time to explain the whats and whys to them.

A conversation is clearly worth it. Americans who work with a financial advisor are nearly twice as likely as those who don’t to say they are very confident they’ll have enough money to retire. They’re also more likely to have a six-figure nest egg: 44% of people who partner with a professional have $100,000 or more saved for retirement versus just 9% of those who fly solo.

Good financial advisors don’t use shame as a tool for behavior change. They educate you on your retirement options and work alongside you to show you what it takes to succeed.

Conclusion: Planning for the Future Can Turn Retirement Hopes Into Reality

If one emotion prevails when it comes to retirement in America, it’s hope: 48% of Americans feel hopeful about their future—no matter how far behind or ahead they are on the road to retirement.

Anyone can make a plan. If a person wants to eliminate retirement stress, they should take time to think about what retirement looks like for them and how much money they already have saved. Once they understand where they are in relation to where they need to be, they can begin to close that gap and gain confidence in their overall retirement plan.

Have questions about this study? Email us!