Americans have faced a variety of challenges over the last couple years, from the global pandemic, student loan crisis, rising prices due to inflation, and employment issues to war in Europe. Considering all the various life issues facing Americans today, Ramsey Solutions conducted The State of Mental Health research study in February 2022. The results shed light on the mental health landscape in America. In fact, 90% of those surveyed said they believe taking care of their mental health is important.

More than half of Americans (56%) are concerned about the state of their mental health, and it’s not hard to see why. One out of 2 people (50%) said they experience stress on a daily basis. Generationally, 59% of Gen Z, millennials and Gen X (those ages 18–57) reported feeling stressed daily compared to only 29% of baby boomers. In addition, Gen Z (48%), millennials (44%) and Gen X (37%) reported feeling unsatisfied at least weekly almost three times as much as baby boomers (17%). One in 5 Americans said that anxiety has a significant impact on their daily life, while over half (52%) said anxiety has at least some impact. Younger generations were even more likely to report about this, with 71% of Gen Z and 58% of millennials saying that anxiety impacts their daily life. 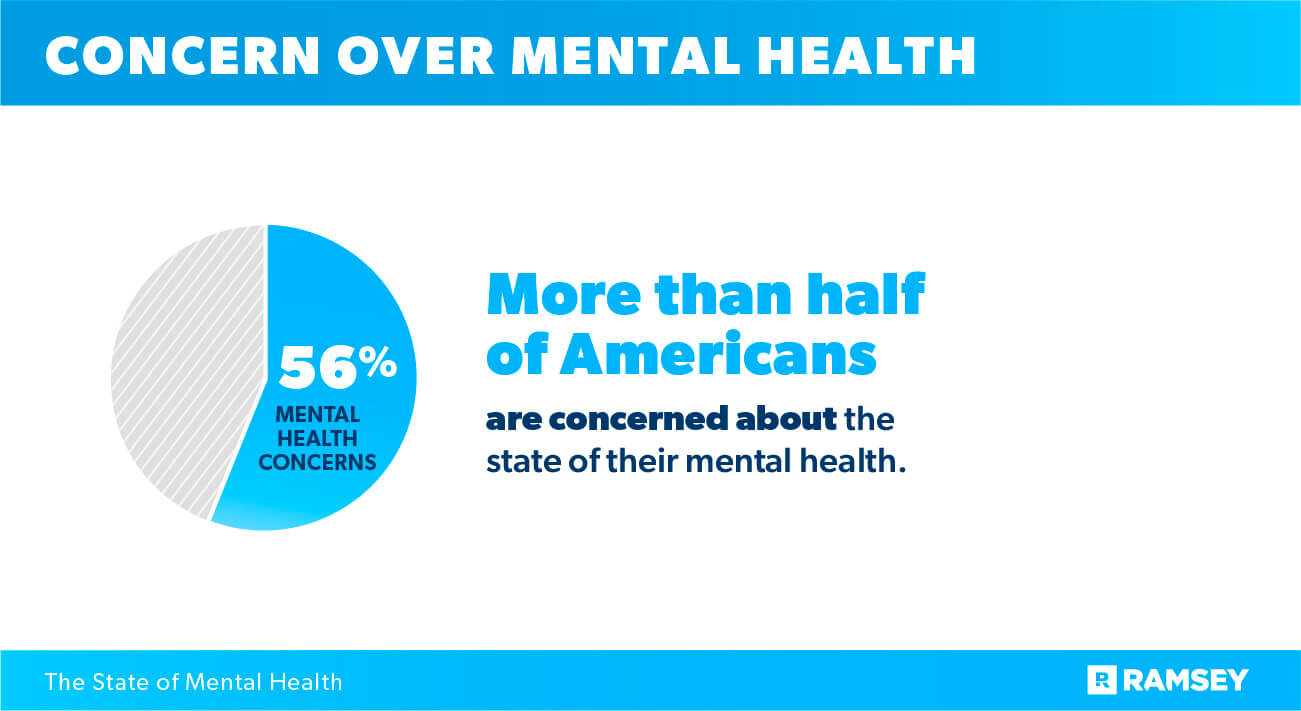 There are many different drivers of stress for people today. While personal finances and money take the lead as a stressor for 63% of the population, other drivers of stress include physical health (57%), job/career (49%), kids and family (47%), friendships (45%), and romantic relationships (45%). Women (29%) are nearly twice as likely as men (17%) to experience significant stress caused by their personal finances and money in the last month. 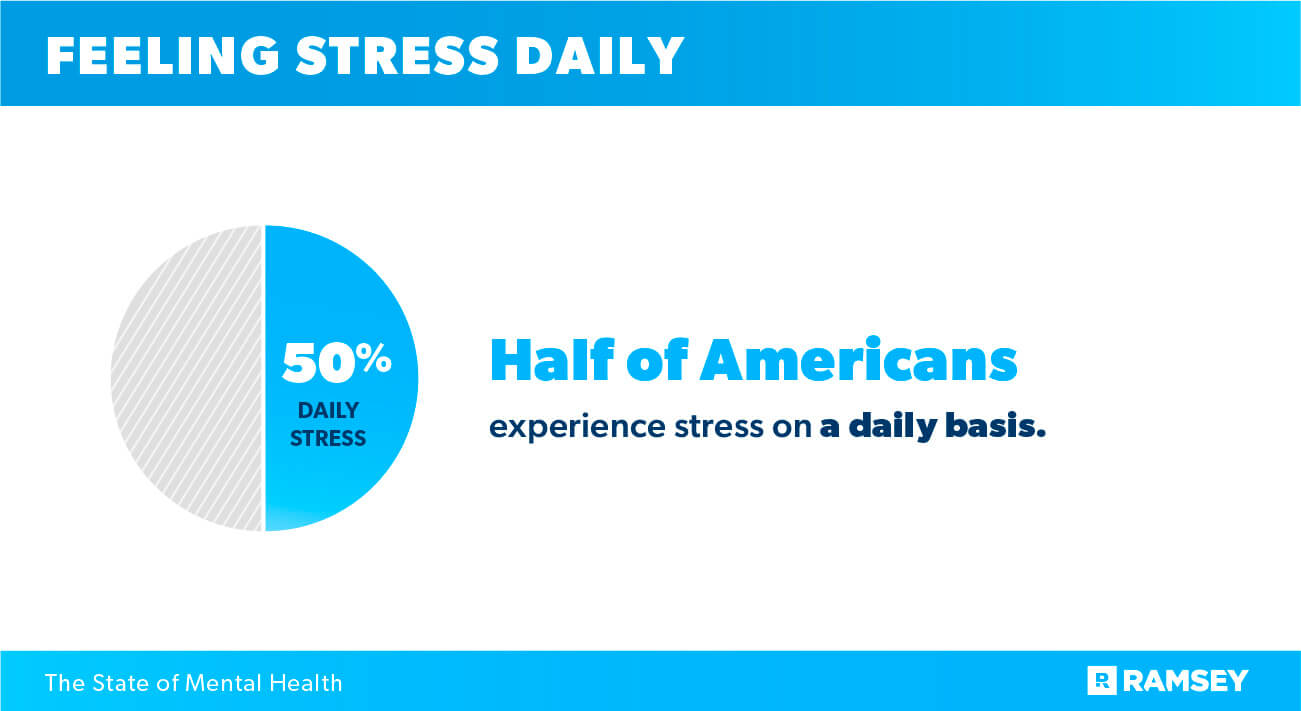 With all this stress and anxiety, Americans are turning to a variety of different sources to deal with these feelings. When it comes to coping with feelings of stress and anxiety, 43% regularly turn to music, 37% watch TV or streaming content, and 26% just scroll on their phone—all of which are avoidance, distraction or numbing behaviors. While 29% of people have seen a professional counselor or therapist for their mental health, 62% feel the struggles they face in life don’t need the help of a professional counselor. Prayer (36%), meditation (30%), medication (25%) and mental health/self-help books (23%) are also popular tools and behaviors people use to address their mental health.

Trauma is a huge factor when it comes to mental health. It can impact a person’s body and relationships for years. More than half of people (54%) said they’ve experienced trauma in their life. And of those who consider themselves someone who has experienced trauma, 3 in 4 (73%) said the trauma from their past still affects their daily life. 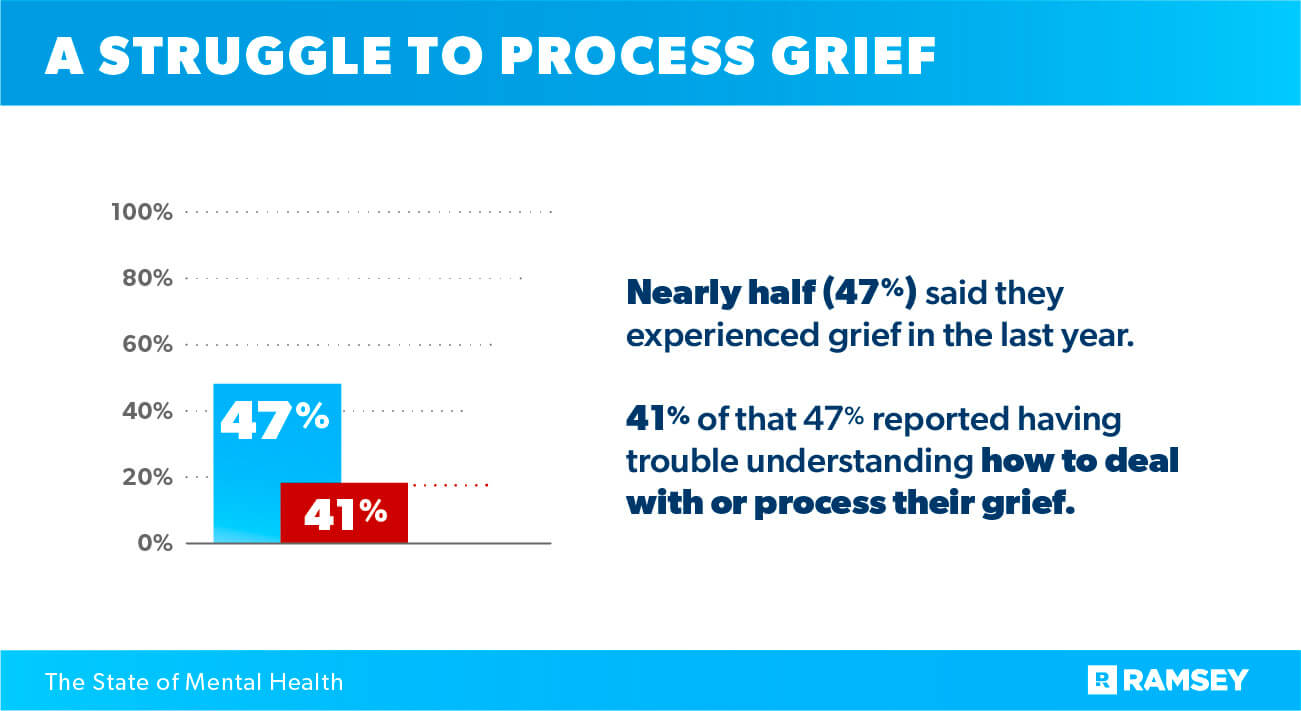 Traumatic experiences often lead to grief. Nearly half of those surveyed (47%) said they experienced at least some grief in the past year—and 18% reported it as a significant amount of The State of Mental Health 6 2022 grief. But among those who experienced grief in the last year, 4 in 10 (41%) said they’ve had trouble understanding how to process their grief. Of those who experienced a significant amount of grief, 54% have trouble understanding how to deal with or process their grief, and 25% have taken time off from work to deal with grief. In addition, 1 out of 4 people who have experienced significant grief in the last year said they had to return to work after a loss/grief before they felt ready.

The Importance of Personal Relationships

Relationships and connection are an important part of life, and the health of those relationships can have an impact on mental health as well. Additionally, the pandemic and other societal shifts have changed how people connect and who they connect with.

A majority of people (68%) reported having three or fewer close friends—and 3 out of 10 wish they had more close friends. It’s not surprising, then, that 1 in 5 people reported feeling lonely on a daily basis. Women (38%) were more likely than men (32%) to report feeling lonely at least weekly, and younger generations (Gen Z, 49%; millennials, 43%; and Gen X, 40%) were more likely than baby boomers (17%) to report feeling lonely at least weekly in the last month. 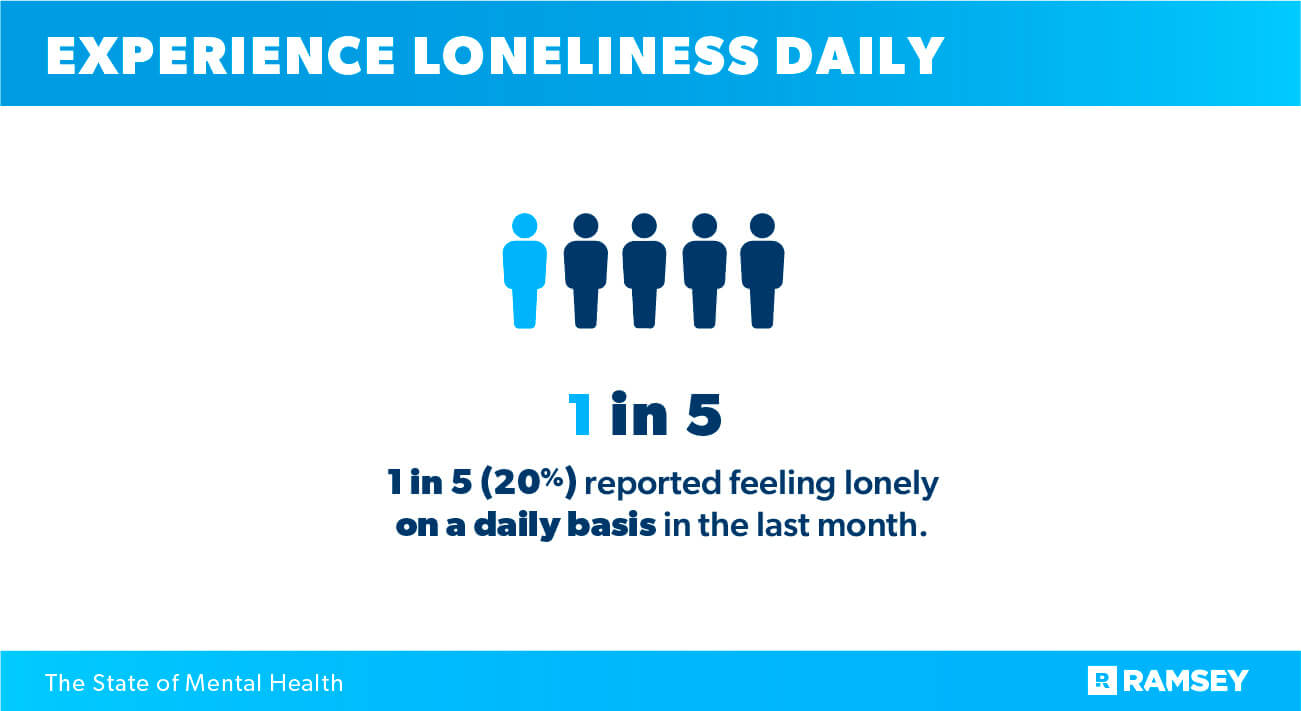 With so much connection happening online, it’s evident that social media is having an impact on relationships and friendships. Of those surveyed, the average number of active social media platforms is 3.7 per person, with 29% reporting having five or more. However, on average, people only belong to one real-life group or organization in their community. And 47% reported not belonging to any groups or organizations in their community. Social media is shaping community and connection, especially among younger generations. Sixty percent of Gen Z and 61% of millennials said they spend more time on social media than with friends in real life. 1 in 5 (20%) reported feeling lonely on a daily basis in the last month.

This emphasis on virtual connections is also impacting the quality and depth of friendships and relationships. More than 4 in 5 (82%) said that their friends and the people they spend the most time with don’t know them deeply and that they don’t feel very close to those friends. Nearly one-third said that their friends don’t know them at all or have surface-level relationships. In fact, more than half (54%) don’t have a friend they feel comfortable calling in the middle of the night with an emergency. This lack of deep connection can also be seen in a lack of trust in relationships. Only 76% of people said they had complete trust in their spouse. And when asked if they had complete trust in others, the numbers quickly went downhill for family members (59%), friends (53%), coworkers (29%) and neighbors (23%). 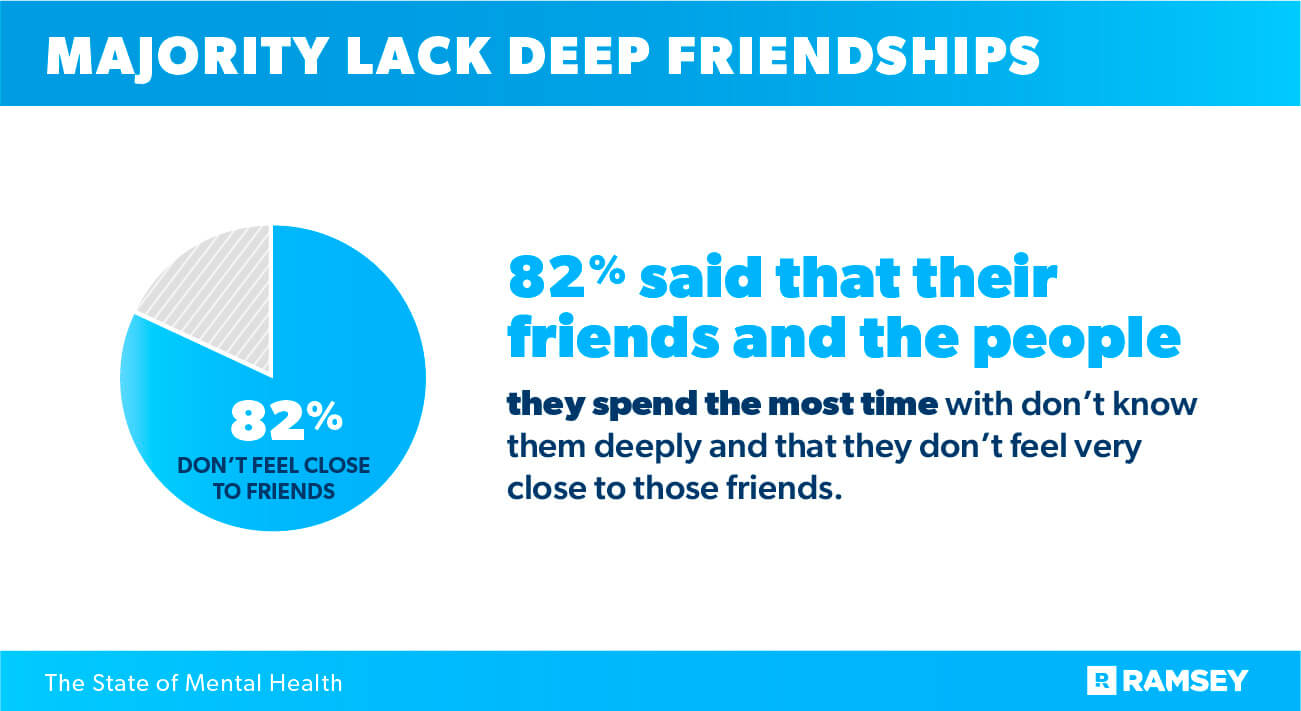 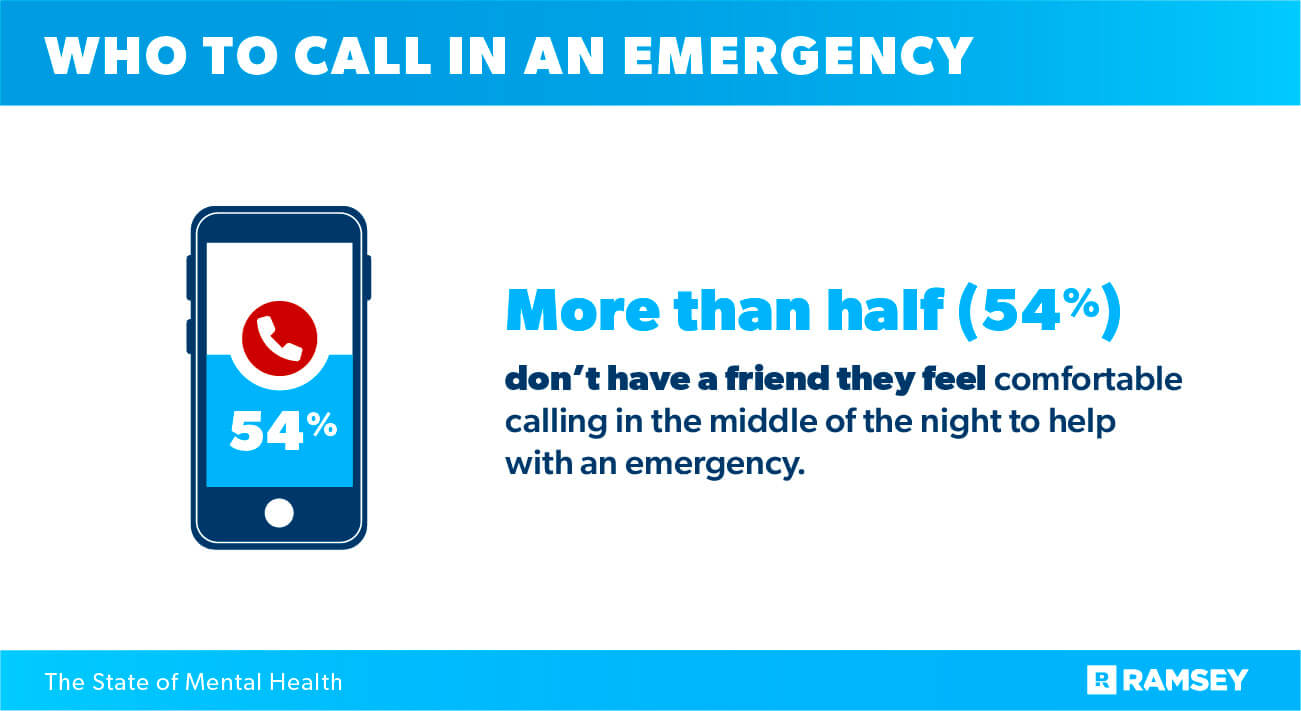 Prioritizing Relationships With Spouses Is Important for Healthy Marriages

When it comes to marriage, men were more likely to rate their marriages higher than women— 50% of men described their marriage as great compared to 41% of women. Women (21%) were twice as likely as men (11%) to describe their marriage as okay. And when it comes to making their marriage a priority, only half (51%) said it was a top priority while 15% said it was a low priority in their lives. But the good news is, prioritizing relationships with spouses can impact the health of marriages. In fact, 70% of those who rated their marriage as great said their relationship with their spouse is a top priority, compared to only 21% of those who rate their marriage as only okay or in crisis. Related to intimacy, 47% of couples struggle with sexual intimacy, and 40% of people struggle with emotional intimacy with their spouse. Among married couples, 1 in 4 has strongly considered or is currently going through divorce.

And while the majority of married people feel valued by their spouse (83%) and that their spouse supports their hopes and dreams (86%), nearly half (44%) said they don’t have sufficient quality time together. On average, 44% said they view their spouse as more of a roommate than a partner— but for those who described their marriage as okay or in crisis, that number jumped to 70%. 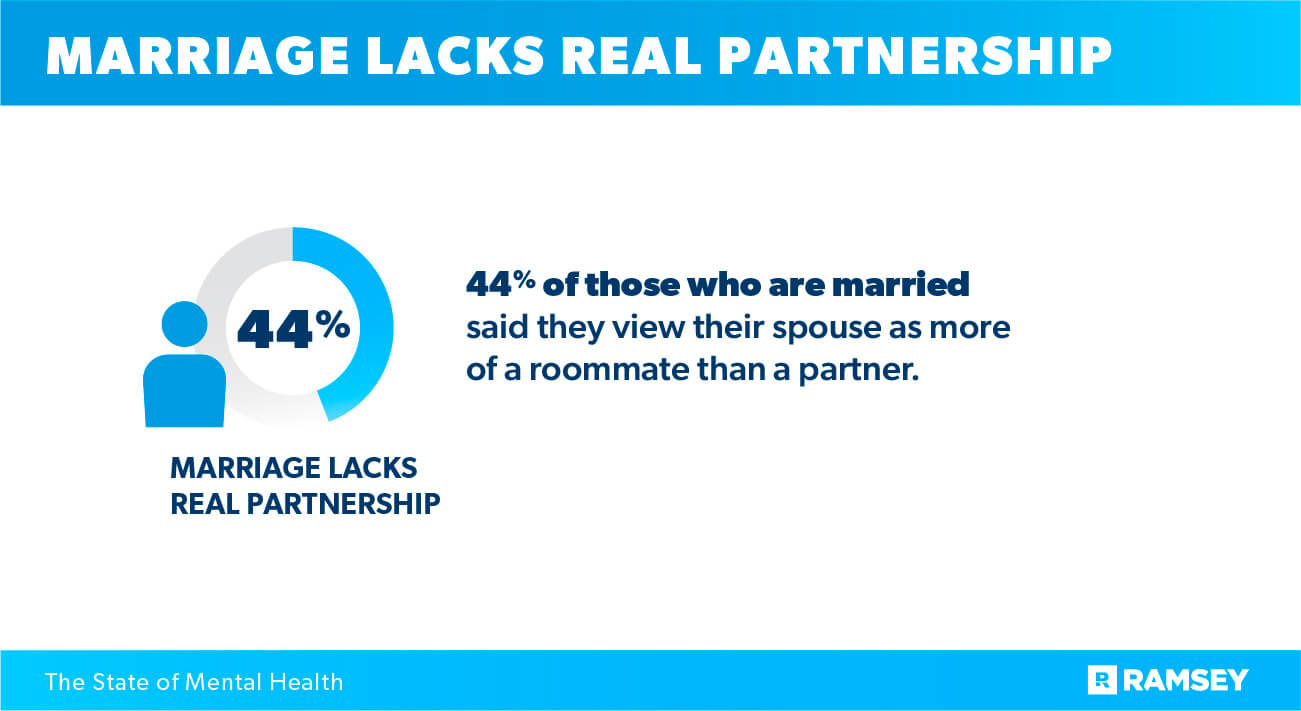 Parent relationships are also challenging for many. One in 4 parents don’t feel good about their relationships with their kids while 39% rated their relationships as great. Four in 10 parents said they’re extremely confident in their parenting skills. When it comes to their personal identity, 77% of parents with kids 18 or younger said they spend more time taking care of their kids than taking care of themselves, and 53% feel they’ve lost their personal identity through becoming a parent. Plus, 3 out of 4 parents of kids 18 or younger (75%) worry about the impact that technology and social media have on their kids.

The Impact of Wellness

A person’s mental health can impact—and be impacted by—lots of factors. When it comes to wellness, The State of Mental Health research in 2022 focused on technology, social media, sleep, exercise and nutrition. All of these can either positively or negatively impact a person’s overall wellbeing. On a daily basis, almost all of those surveyed (96%) spend time on a smartphone and 93% watch TV. On average, people spend more than three and a half hours on their smartphone a day. In addition, 3 in 4 adults spend time on a computer every day. 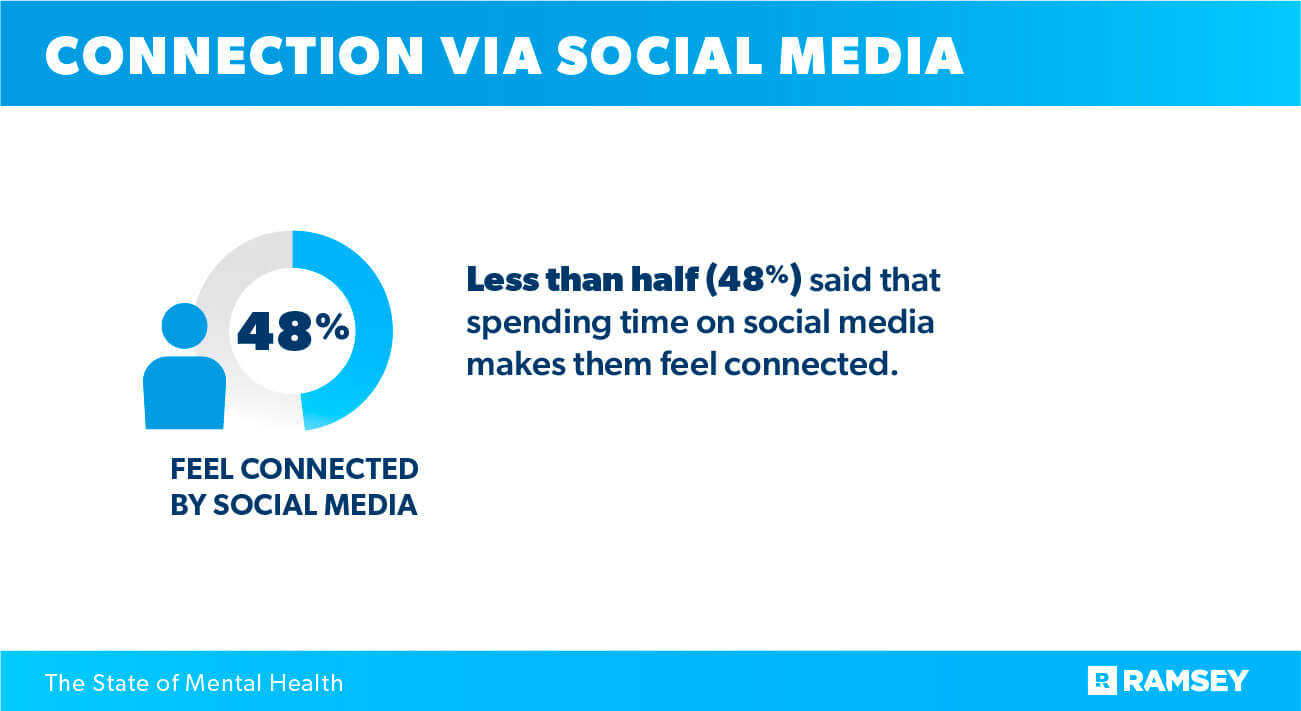 Taking care of physical health is an important part of mental health, as well as overall health. A majority of those surveyed (83%) said that getting good, quality sleep is a priority for them. Yet, in a typical night, those surveyed reported an average of just over six hours of sleep per night. Less than 4 in 10 adults rated the quality of their sleep as good or great. And among those with self-reported lower mental health, only 15% rated their quality of sleep as good or great, compared to 52% of those who self-reported higher mental health.

One out of 4 adults exercises daily, and another 25% exercise a few times a week. Those who rated their mental health higher (58%) were significantly more likely than those who rated their mental health lower (38%) to report exercising at least a few times a week as part of their routine. Overall, one-third of adults said they don’t have time in their daily life for exercise, and over half (55%) don’t feel motivated to exercise. These trends show the positive correlation of good physical health habits, like quality sleep and regular exercise, and stronger mental health overall.

When it comes to diet and nutrition, 48% have tried and failed to make changes to their diet. Women (54%), more often than men (42%), have made attempts to change their diet and failed. Almost 60% of people feel guilty about some of the things they eat, and 68% wish they had a healthier or more nutritious diet. And while 1 in 2 (56%) are satisfied with their physical appearance, fewer women (49%) than men (64%) reported feeling good about how they look.

Mental health and physical health are closely correlated. Across almost all of the physical wellness categories measured, those whose mental health is suffering are also less likely to have healthy behaviors and attitudes related to their technology usage, sleep, exercise and nutrition.

The State of Mental Health is a research study conducted by Ramsey Solutions with 1,001 U.S. adults to gain an understanding of their behaviors and attitudes related to their mental health, relationships and wellness. The nationally representative sample was fielded February 15–19, 2022, using a third-party research panel.