If you’re like most folks, the first two questions that pop into your head when you look at your tax return each year are “How much did I make?” and “How much did they take?”

Who are “they”? The federal government, of course.

And while you grumble about how much Uncle Sam takes out of your paycheck every two weeks, there’s another question you might wonder about: What are “they” doing with my tax dollars, anyway?

That’s a great question . . . especially since the IRS collects around $3.5 trillion in federal taxes each year paid by hardworking taxpayers like you.1 That’s trillion—with a T!

The IRS can seem like a riddle, wrapped in a mystery, inside an enigma: Money goes in, a lot less comes out, but what it does in between those two steps is anyone’s guess.

Well, not anymore. It’s time to pull back the curtain and find out where your tax money goes.

What Do Your Federal Taxes Pay For?

Basically, there are three main categories that your tax money pays for: 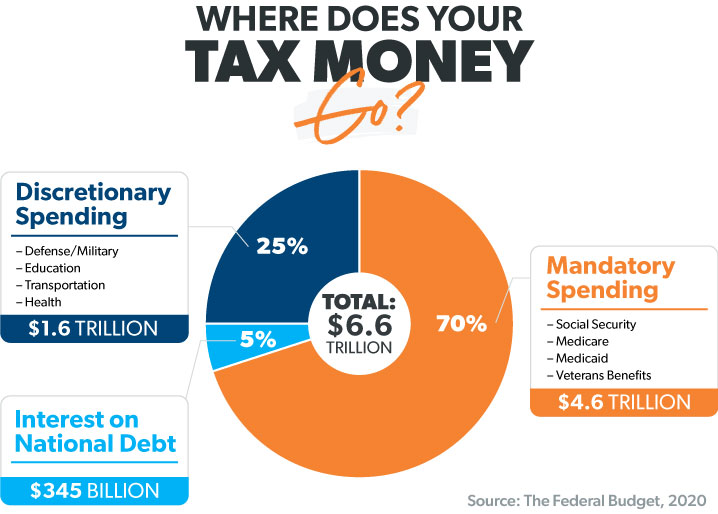 Pretty broad, right? Let’s break it down and see where your money really ends up.

Let’s just say that Uncle Sam is not exactly working the Baby Steps. The U.S. government is currently more than $31 trillion in debt—and counting—with a small percentage of your tax dollars going toward paying the interest on that debt.3

The interest on the national debt, which must be paid by the federal government each year, changes based on two factors—the size of the debt itself and rising and falling interest rates. And since both the national debt and the interest rates on that debt are expected to increase over the next decade, so will the size of our nation’s interest payments—which means more of our taxpayer dollars might be used to make those payments.4

Maybe it’s time to finally get Washington on the debt snowball . . .

Let’s talk entitlements. These are Social Security, Medicare, Medicaid, and Veterans Affairs benefits and services. They’re called entitlements because the government takes money out of your paycheck to fund them, so you’re entitled to these benefits once you meet certain conditions.

This category of spending has gone way up since 1962, and there are two main reasons why. First, there was the introduction of new entitlements such as Medicare and Medicaid (started in 1965), the earned income tax credit (also known as the EITC, started in 1975), and the child tax credit (1997). Second, the population receiving these benefits has exploded as Baby Boomers enter retirement age, start collecting Social Security benefits, and enroll in Medicare.5

All of these factors, plus a handful of benefits for our military veterans and COVID-19 relief programs, brought mandatory spending’s piece of the pie to more than two-thirds (70%) of the federal budget in 2020. Let’s take a look at some of the big pieces.

Social Security was created to provide income for retired workers over the age of 65 and accounts for a large chunk of mandatory spending. It’s designed to supplement your income when you retire or become disabled. If you were to die before you become eligible, your dependents would receive benefits.

The types of people who receive Social Security benefits are:

Social Security taxes and benefits are tied to inflation, which means they go up as things get more expensive. Even so, the average Social Security monthly benefit for retirees is only $1,555 each month.7 So if you’re banking on Social Security to fund your retirement dreams, you’re going to want to rethink that plan!

That’s why it’s so important to save at least 15% of your income for retirement. If you have questions about saving for retirement, contact one of our SmartVestor Pros and start making a plan.

There’s no way around the fact that health care is expensive—especially when you’re in your retirement years or for Americans struggling to get by. That’s where Medicare and Medicaid come in.

Medicare is a federal health insurance program that provides coverage for several groups of people, but mainly folks over age 65. Who pays for it? Most of it is on your dime! American taxpayers fund Medicare through a 1.45% payroll tax on all of their earnings and an additional 0.9% tax on earned income over $200,000 ($250,000 for married couples).8,9

Medicaid is another government-sponsored insurance program that provides health coverage for low-income adults, children, pregnant women, elderly adults and people with disabilities.10 The federal government splits the cost of Medicaid with state governments, and the states get the better deal—in some cases, Uncle Sam pays 78% of their Medicaid costs.11

Together, Medicare and Medicaid make up 20% of the government’s budget, totaling more than $1.3 trillion to cover roughly 139 million Americans under both programs.12,13

These are the big programs that are funded by mandatory spending. While some of the money for these programs (Social Security and Medicare) comes out of your check automatically, some (including money for veterans benefits) comes from taxes on your earned income and things like capital gains.

Plus, more of these benefits for our veterans are covered under discretionary spending. Speaking of which . . .

Discretionary spending is the last piece of the puzzle when it comes to how your tax money is spent. Every year, Congress dukes it out over who gets how much money when they debate spending bills. In other words, these programs are subject to Congress’ discretion, meaning they can decide to increase or decrease funding for certain programs as they see fit.

Let’s take a look at some of the major categories covered under discretionary spending.

Defense spending usually accounts for about half of all discretionary spending, which funds the Department of Defense and all of its operations.

This pays for roads and bridges, air traffic control and the Department of Transportation. We have to get around in our planes, trains and automobiles somehow!

These funds mainly go through the Department of Education and cover everything from paying teachers’ salaries to funding grants to pay for college. Unfortunately, this also includes funding for federal student loans. Womp, womp.

While some veterans benefits are mandatory expenditures, almost half of the Veterans Administration (VA) budget comes from discretionary funds set aside by Congress.15 This covers things like medical care, construction of VA facilities, and IT services at those facilities.

Some discretionary spending goes to fund agencies like the Centers for Disease Control (CDC), the Food and Drug Administration (FDA), and the National Institute of Health (NIH). These agencies research diseases and new drug therapies, oversee food safety, and fund medical research.

Whew! Now you know where your money goes. We get it, taxes are complicated—but that doesn’t mean they have to be stressful. (You know, other than not having that money in your bank account.)

Whether you need help from a RamseyTrusted tax professional or your tax situation is simple enough that you can file your taxes with a tax prep software like Ramsey SmartTax, we can help you take the stress out of tax season!

File your taxes with a tax service you can trust!