Doing your taxes is like the chore no one wants to do. In some houses, it’s scrubbing the toilet bowl. In others, it’s folding laundry. So you put it off. But when you finally do the chore you hate, you usually feel a sense of accomplishment.

So, you finished your federal taxes and you’re feeling fine. But wait. There’s another toilet to scrub: your state income taxes. Yep, Uncle Sam isn’t the only one who takes a cut of your paycheck. A total of 41 states collect state income taxes and require you to file a state tax return. The amount you owe is based on how much you make and where you live.

What States Have Income Taxes?

If you picked a state at random, you’d have an 82% chance of hitting one with a state income tax on wages and salaries. Those odds aren’t in your favor. Each of the 41 states have different tax laws, so the amount you owe varies quite a bit from state to state.

Some states have flat income tax rates, while others have a range of tax rates (called progressive tax rates) where the rates increase as your income grows. And there are others with no state income taxes at all. Rather than listing all 41 states with a state income tax, we thought it’d save some space to list the nine states that don’t have income taxes on wages and salaries.

States With No Income Taxes

There are nine states with no state income tax: 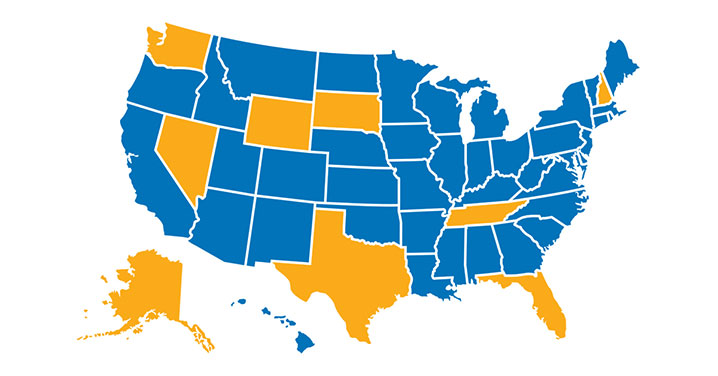 Just because you don’t pay state income taxes doesn’t mean you don’t pay anything. Many of these states raise money in other ways, like sales taxes, property taxes and excise taxes on things like gasoline. But still, it’s a pretty sweet deal to be off the hook for income taxes.

New Hampshire is a little bit of a gray area. While it doesn’t have an income tax on earned income, it does tax interest and dividend income at a rate of 5% on amounts over $2,400 a year ($4,800 for married couples).1 But good news: New Hampshire is phasing out the tax by 1% a year beginning in 2023.2

If you don’t live in a state without income taxes or are planning to move to a new state, keep reading . . .

Nine states have a single-rate income tax structure, also known as a flat tax. This just means that everyone pays the same percentage of their income, no matter how much or how little they earn. Here are the nine states with flat taxes and their rates for 2022:

A progressive income tax means that as you earn more money, you pay a larger percentage in taxes. A range of income taxed at a specific rate is known as a tax bracket.

The remaining 32 states (plus Washington, D.C.) all have a progressive income tax, and they all do it differently. Some states, like Kansas, have three tax brackets based on your income, but California has 10 brackets and Hawaii has a dozen!4 It takes some math skills to figure out your tax liability in a 10-bracket system.

Many states include brackets within narrow income clusters, so you end up reaching the highest marginal rate pretty quickly as your income grows. A marginal rate is the tax rate you pay within each backet of you income. It’s often more helpful to look at average tax rate because that’s the average amount of taxes you’ll pay based on you income.

Since states have so many different tax brackets, it’s difficult to compare tax rates among the states to get an idea of what you might actually pay in taxes. But just to give you a ballpark figure—if you earn an average income of about $70,000, you’ll likely pay about 4% to 6% in taxes in most states.

North Dakota has the lowest top marginal rate at 2.9%, and it kicks in once you make $445,000 (for both single filers and married couples).6

One small benefit of paying state income taxes is that you can get a tax deduction for them on your federal taxes. The state and local tax (SALT) deduction lets you deduct up to $10,000 a year in SALT.10 So, the SALT deduction is helpful, but it’s really nothing to jump up and down about.

Before the Tax Cut and Jobs Act of 2018 capped the SALT deduction at $10,000 and nearly doubled the standard deduction, SALT was a valuable deduction if you lived in an area with high state and local taxes. This provision is scheduled to expire after the 2025 tax year, so it’s something to keep an eye on in the future.12

Get Some Quality Guidance on Your Taxes

Hey, we get it. Taxes are hard. And adding a state income tax return can make it unbearable. If you’re looking for tax software to handle both your federal and state tax returns, check out Ramsey SmartTax. It’s simple software with no hidden fees!

If you can’t bear to look at more tax forms, an Endorsed Local Provider (ELP) can help. They’re RamseyTrusted tax pros who know state-specific tax code so you don’t have to worry about it.

Find a pro near you today!