Bills, bills, bills—if you feel like there have been about a hundred different bills coming out of Capitol Hill these days, you’re not alone. The truth is, bills happen all the time (in fact, it’s kind of a big part of how the U.S. government operates). But these massive spending bills have been making headlines and getting even more attention than they normally do.

And here’s one more you can add to the list: Biden’s Build Back Better spending bill. Say that three times fast. (Actually, don’t—because you might end up as tongue-tied as these politicians.) Sometimes it’s called the Build Back Better plan. Sometimes it’s called Biden’s spending plan. But whatever you want to call it—it’s not cheap. Here’s everything you need to know about the spending bill.

What’s the Status of the Build Back Better Plan?

In March 2022, Biden used his State of the Union address to continue talking up the Build Back Better agendas he hopes to get through—but he did it all without even saying the phrase “Build Back Better.” Instead, he almost rebranded it as his plan for “building a better America.”3 But even if this is what Biden is hoping for, it looks like it’s not the priority right now—so stay tuned as the 2022 midterm election gets closer. Whatever the next move is for the Build Back Better plan, it’s going to be an uphill hike for sure.

What Happened to the Build Back Better Plan in 2021?

Last year, Biden’s spending plan passed in the House of Representatives on November 19 by a vote of 220–213.4 Democrats were itching to get this bill passed hot on the heels of the infrastructure bill becoming law. Their goal was to get everything wrapped up in the House before Thanksgiving, and they managed to pull it off. But the negations fell through in December before it could go to the Senate for a vote. None of the 50 Senate Republicans were on board with the bill—and neither was Democrat Senator Joe Manchin.

Plus, in 2021, all eyes were on the debt ceiling deadline, the inflation rates shooting through the roof, and the supply chain disaster—so there wasn’t much time for anything else. But with the midterm elections coming up at the end of 2022, there could be more pressure to get some traction on the Build Back Better plan that everyone’s forgotten about.

What Is the Build Back Better Plan?

The spending bill started out at a whopping $3.5 trillion and has since been whittled down to a price tag of “only” $1.75 trillion. How nice. The move to shave things down happened back on October 28, 2021, in hopes that the announcement would encourage progressives to vote for the bipartisan bill.

Now, back to that price tag—no matter how you slice it, $1.75 trillion is a lot of money. But it’s easy for us to brush that number aside because we’re not paying for it, right? . . . Right? Well, we hate to burst your bubble, but if this bill becomes law, someone’s got to pay for it at some point down the road. And the truth is, when the government spends money, it affects all of our wallets.

But before we get into that, let’s look at what’s going on with the Build Back Better bill and where lawmakers stand right now.

Okay, let’s get a closer look at Biden’s spending bill. Like we said, it’s part of the president’s larger Build Back Better agenda that includes a lot of the projects he talked about when running for president. But you won’t find bridges and roads here. This bill is more focused on the “human infrastructure” side of things, like the American Families Plan, health care, education and climate change policies. Here’s a breakdown of some of that spending: 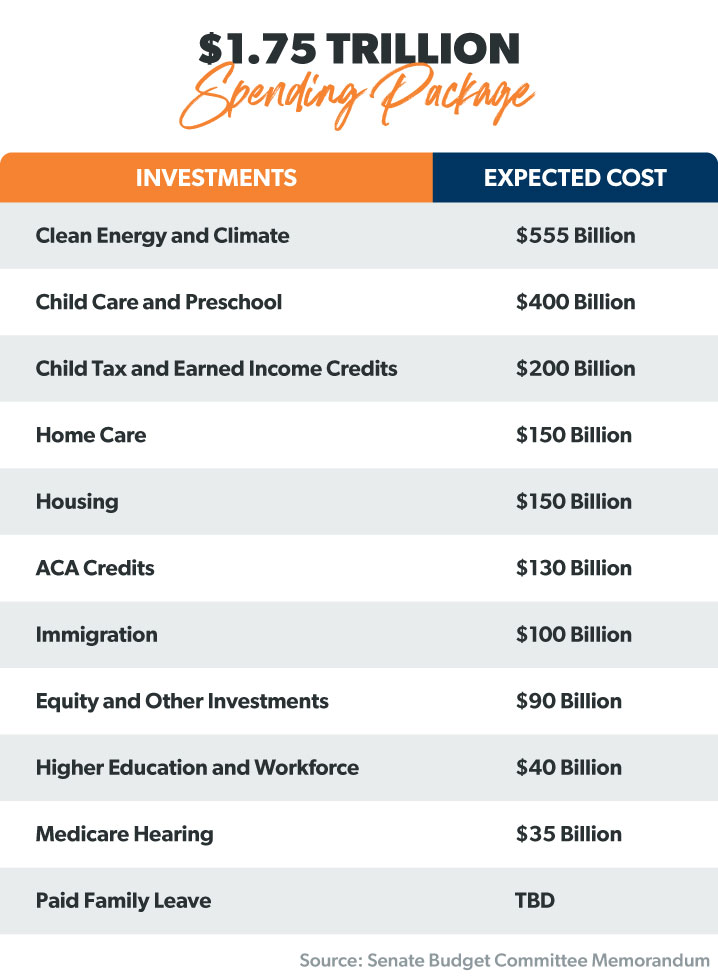 That all depends on who you ask. The White House says the spending bill would be completely paid for by taxing large corporations and the richest Americans.5 And just how “well off” is rich to the Biden administration? The White House claims, “No one making under $400,000 will pay a penny more in taxes.”6

But some economists say that 20–30% of middle-income Americans could pay more in taxes in 2022 if Biden’s spending plan gets passed.7 And that’s not even including the tax hikes that could come along down the road to pay for these social programs year after year. Gulp.

Next Steps: How the Build Back Better Plan Could Become Law

Okay, here’s a little backstory first: Some House Democrats threatened to vote against this part of the spending bill unless the $1 trillion infrastructure bill was passed first—and that’s exactly what they did.8 Meanwhile, more liberal Democrats stood firm and said they’d only vote yes if both bills were a package deal.9 Spoiler alert: They weren’t. And that meant six Democrats ended up voting against the infrastructure bill.10

Fast-forward to November 2021—the House tried to get the Build Back Better plan passed on November 18 but hit a road block when House Minority Leader Kevin McCarthy spoke on the floor for a record-breaking 8 hours and 32 minutes to delay voting on the bill.11 His holdup worked . . . but only until morning when the House ended up passing the bill early on November 19.

How Could the Build Back Better Spending Plan Affect Your Wallet?

All right, so how would Biden’s spending plan impact your money day to day in the real world? That’s the 1.75 trillion-dollar question. Let’s take a closer look—and find out where our money comes in.

Build Your Own House Back Better

The government is going to make decisions that you have no control over (surprise, surprise), so all you can do is control the controllables. That means you get to tackle the things you can actually control day to day—like getting on a budget, living on less than you make, getting out of debt, and saving for the future.

Watching Uncle Sam go on a spending spree with his money is a good way to get inspired to take control of your own dough. It’s never a bad time to dump debt, build up your savings, and invest for your future. A Ramsey+ membership can help you get there. With Ramsey+, you’ll get access to our best money products like Financial Peace University, our premium budgeting tool EveryDollar, one-on-one coaching, and more courses and audiobooks to help you win with money. Now that’s really building back better.