You’re sitting at the kitchen table, staring down collection notices and wondering how you’re going to make things work. Maybe you’ve recently lost your job and the debt is piling up to an overwhelming amount. And then you think it—that word you never thought you’d have to consider: bankruptcy.

More than just a way to lose a game of Monopoly, bankruptcy in real life is a lot more serious: It’s when you go before a judge and tell them you can’t pay your debts. Then, depending on the situation, they either erase your debts or make a plan for you to pay them back. There are several reasons why people file for bankruptcy—things like a job loss, a divorce, a medical emergency or a death in the family. In fact, more than 730,000 nonbusiness bankruptcies were filed in 2018.1 That’s crazy!

Get help with your money questions. Talk to a Financial Coach today!

But bankruptcy is a major life event that affects more than just your finances. It can follow you when you’re trying to apply for a job, buy a house, or start a business. Even though people might see it as a “fresh start,” bankruptcy only treats the symptoms, not the problem.

It’s also important to know that bankruptcy doesn’t clear student loans, government debts (taxes, fines or penalties), reaffirmed debt (where you recommit to the terms of a current loan), child support or alimony. So, if those are your only debts, bankruptcy isn’t the path for you.

What Are the Types of Bankruptcies?

You may have just taken one look at this list and zoned out for second. That’s okay. More than likely, you would only be dealing with the two most common types of bankruptcies for individuals: Chapter 7 and Chapter 13. (A chapter just refers to the specific section of the U.S. Bankruptcy Code where the law is found.2) But we’ll take a look at each type so you’re familiar with the options.

Also known as liquidation or straight bankruptcy, Chapter 7 is the most common type of bankruptcy for individuals. A court-appointed trustee oversees the liquidation (sale) of your assets (anything you own that has value) to pay off your creditors (the people you owe money to). Any remaining unsecured debt (like credit cards or medical bills) is typically erased. But as we mentioned earlier, this doesn’t include the types of debt that aren’t forgiven through bankruptcy, such as student loans and taxes.

Now, depending on which state you live in, there are some things that the court won’t force you to sell. For example, most people are able to hold on to basic necessities like their house, car and retirement accounts during Chapter 7 bankruptcy, but nothing is guaranteed. Chapter 7 also can’t stop a foreclosure—it can only postpone it. The only way to keep the stuff you still owe money on is to reaffirm the debt, which means you recommit to the loan agreement and continue making payments. But most Chapter 7 bankruptcies are no-asset cases, which means there’s no property with enough value to sell.

You can only file for Chapter 7 bankruptcy if the court decides you don’t make enough money to pay back your debt. This decision is based on the means test, which compares your income to the state average and looks at your finances to see if you have the disposable income (aka the means) to pay back a decent amount of what you owe to creditors. If your income is too low to do so, then you may qualify for Chapter 7.

Keep in mind that if you file for Chapter 7 bankruptcy, you will have to attend a meeting of the creditors where people you owe money to can ask you all kinds of questions about your debt and your finances. Yeah, that’s about as fun as it sounds. A Chapter 7 bankruptcy also stays on your credit report for 10 years, and you won’t be able to file for it again until after eight years.

While Chapter 7 bankruptcy often forgives your debt, Chapter 13 bankruptcy basically reorganizes it. The court approves a monthly payment plan so you can pay back a portion of your unsecured debt and all of your secured debt over a period of three to five years. The monthly payment amounts depend on your income and the amount of debt you have. But the court also gets to put you on a strict budget and check all your spending (ouch!).

Unlike Chapter 7, this kind of bankruptcy allows you to keep your assets and catch up on any debt that isn’t bankruptable. Chapter 13 can also stop a foreclosure by giving you time to bring your mortgage up to date.

For the most part, Chapter 11 bankruptcy is used to reorganize a business or corporation. Businesses come up with a plan for how they’ll continue operating the company while paying off their debt, and both the court and the creditors must approve this plan. Some individuals, such as real estate investors, who have too much debt to qualify for Chapter 13, but who also have a lot of high-value properties and assets, may also choose to file under Chapter 11. But unless you’re a pro athlete or a celebrity, you’re probably not going to mess with this one.

This is a repayment plan that allows family farmers and fisherman to avoid having to sell all their stuff or foreclose on their property. While it’s similar to Chapter 13 bankruptcy, Chapter 12 is a little more flexible and has higher debt limits.

Chapter 9 bankruptcy is another repayment plan that allows towns, cities, school districts, etc. to reorganize and pay back what they owe.

For more specific information about bankruptcy laws in your area, visit the United States Courts website.

Which Type of Bankruptcy Is Right for My Situation?

Since the other types of bankruptcies are specifically geared toward certain individuals or businesses, most people only qualify for Chapter 7 or Chapter 13. Here’s a side-by-side comparison to show how they’re different: 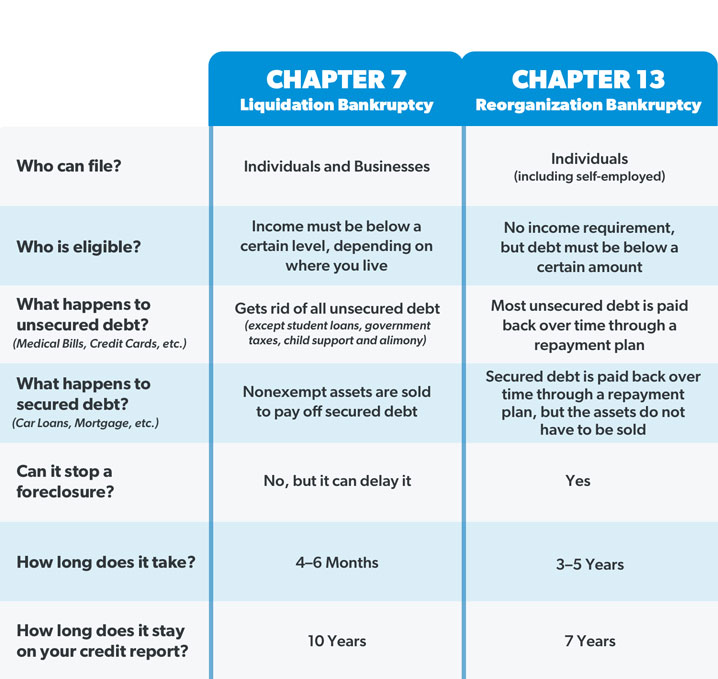 The biggest difference between Chapter 7 and Chapter 13 bankruptcy comes down to the person’s assets and income level. For instance, if someone had a recent job loss or an unsteady income, they might fall into a Chapter 7 bankruptcy. But if the means test says they make enough money to pay back their debts, they would fall into a Chapter 13 instead. Someone might also apply for Chapter 13 if avoiding home foreclosure is a top priority, or they could go for Chapter 7 if timing is an issue—since it’s significantly faster than Chapter 13.

But bankruptcy is a nerve-wracking experience, and choosing between Chapter 7 and Chapter 13 is like trying to pick the lesser of two evils. In both cases, privacy goes out the window. All your information literally gets laid out on a table for the court to look through. Then there’s the fact that about half of Chapter 13 bankruptcy cases nationwide are dismissed because the debtor can’t make the monthly payments.4

And while creditors are not legally able to hound you for money while you go through the bankruptcy process, the court will come after you harder than any credit card company can if you miss a payment in Chapter 13. But if your case is dismissed, then creditors have the ability to take their cut directly from your paycheck and your home might go into foreclosure.

Bankruptcy may seem like a magic wand that can make all your problems disappear. But it’s far from a magical experience—and it takes a huge emotional toll. Dave Ramsey filed for bankruptcy before he completely changed the way he handled money, and he never advises anyone to consider it. In fact, he says bankruptcy falls into the same category as divorce—it should only be your last resort, after you’ve tried every other possible route first.

So, let’s look at some ways you can avoid filing for bankruptcy altogether.

What Are Some Alternatives to Filing for Bankruptcy?

No matter how deep in debt you are, it is possible to avoid bankruptcy. You just need to know your options. Here are a few steps you can take that will help get you out of debt without filing for bankruptcy:

Before you do anything, you want to make sure the Four Walls are covered: food, utilities, shelter, and transportation. You won’t have the energy to fight your way out of debt if you don’t have a house to sleep in or food to eat. So make sure you’re taking care of yourself and your family first. The collectors can wait.

We mentioned before that in Chapter 13 bankruptcy, the court puts you on a budget and tracks your spending. But the truth is, you can do those things without filing for bankruptcy. If you’re on your last leg, making a budget can be a total game changer. By tracking where your money is going—instead of wondering where it went—you’ll find money you didn’t even realize you had. And yeah, budgeting also means cutting all unnecessary expenses to pay off debt. The cable and the subscriptions have to go. No more dining out. No more vacations. You’re in survival mode. But instead of the government telling you how to manage your money for five years in a bankruptcy case, you get to be the one calling the shots.

Your income is your most powerful wealth-building (and debt-fighting) tool. The more money you make, the more you can throw at your debt. So, you may need to pick up a second job or work more hours at your current job to help keep you afloat while you catch up on those monthly payments. Yes, it can be exhausting, but your temporary sacrifice will be worth it in the long run.

Remember how we said the court liquidates your assets in Chapter 7 bankruptcy? What if you sold your stuff instead? If you’ve got anything of value, like boats, fancy lawn mowers, or anything with a motor that you don’t use to drive to work, sell it! Furniture, collectibles, jewelry, that guitar you promised to learn to play someday—anything you don’t need has got to go. Sound extreme? This is basically what could happen if you file for bankruptcy—except you wouldn’t have control over how your things get sold. So hit up Craigslist, eBay and Facebook Marketplace and turn your stuff into fast cash.

Get on a plan!

Did you know that most bankruptcy courts require you to go through a financial literacy course before your debt can be forgiven? That’s because debt has become a cycle of life for so many. But it doesn’t have to be that way! Financial Peace University (FPU) will teach you how to kick toxic money habits, save and pay off debt like a champ, and build a great future for you and your family.

This proven plan has helped almost 10 million people change their lives. Get started today with Financial Peace University and say goodbye to debt for good!