Leadership isn’t for wimps. It’s scary and hard. But leading your team to achieve big, daring goals is one of the most rewarding things you’ll ever do—if you do it well. And that starts with deciding to level up in how you lead. Just like there’s no magic pill for weight loss or better finances, there’s no magic pill to being a leadership expert. You just put one courageous foot in front of the other, day in and day out, getting better and stronger as you go. And using the transformational leadership style will help you shift your mindset to focusing on your team’s ability (not just yours) to get those big, daring wins.

In the words of the Transformer Optimus Prime, “Autobots, transform and roll out!” If only transformation was that simple for us non-autobots, right? But it’s possible to spur on change—and it starts with your leadership.

The idea of a style of leadership that transforms team members, businesses and the world was first introduced in the 1970s by sociologist J.V. Downton. The theory caught fire later that decade when James MacGregor Burns, a leadership expert and historian, wrote Leadership. In this book, James describes transformational leadership as a style where “leaders and followers raise one another to higher levels of motivation and morality.” This style is based on a leader who has built trust and respect with their team—and because of that, they can influence their team to work harder and think smarter to achieve a common goal.

James put a spotlight on a leadership style that increases loyalty, commitment and the ability to accomplish way more than the company and team members thought they could. So, what does a transformational leader look like?

The Most Common Qualities of Transformational Leaders:

If you want to be a world-class leader, you have to embrace each of those areas. And if you’re really hungry to transform business as usual, you need to be able to adapt, unify, inspire and clearly communicate with your team. Mastering these is crucial to becoming a true transformational leader. Some qualities will come to you more naturally than others, and that’s okay. Keep challenging yourself to grow so you can help others do the same, just like other great men and women have done throughout history.

This legendary civil rights activist inspired others—from national politicians to everyday people—to think beyond the status quo and change the future of America. Martin Luther King Jr. showed what it meant to be a true transformational leader by inspiring and unifying the crowd with his famous “I Have a Dream” speech: “I have a dream that one day this nation will rise up and live out the true meaning of its creed: ‘We hold these truths to be self-evident, that all men are created equal.’”

Amazon’s founder is a visionary who inspires his team members to take risks. He said, “I would never say no to something the team wanted to do, but I might say yes to something the team didn't want to do. You want there to be multiple ways to get to 'yes' because you want to encourage risk-taking.”

The founder of the Virgin Group is famous for treating his employees like family—which helps build trust and creates a team that’s ready to transform a business. He believes that “If you put your staff first, your customers second and your shareholders third, effectively in the end, the shareholders do well, the customers do better, and your staff are happy.”

What’s one of Condoleezza Rice’s secrets to success? This former secretary of state knows how important influence is in a leadership role. “Power is nothing unless you can turn it into influence,” she said.

Sam Walton, the founder of Walmart, lived by this transformational principle: “Our company is built on people. The success we’ve had is because of our people . . . We’ve made partners out of our folks, rather than employees.” He believed outstanding leaders go out of their way to esteem their personnel and treat them as associates. 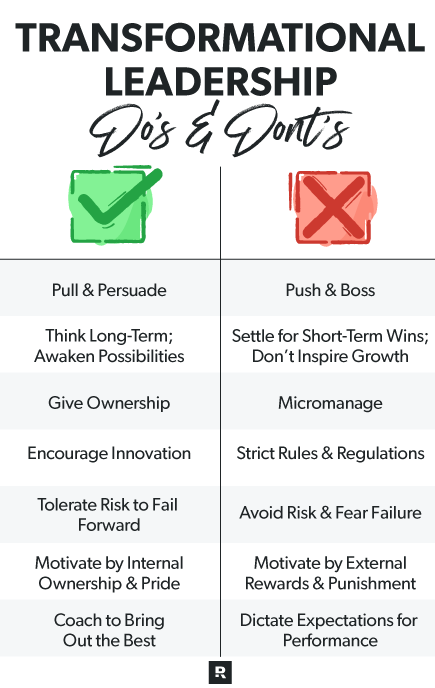 The 4 I’s of Transformational Leadership

Transformational leaders inspire, motivate and cast a clear vision for their team. They get everyone on board to work toward a common goal. Part of their role is encouraging team members to rise up and take on new challenges (and to meet them with plenty of support when setbacks or failures happen).

Transformational leaders know their people matter most and that it’s their job to believe in and encourage them. They make sure team members are regularly recognized for their hard work and go out of their way to understand and value the unique personalities and communication styles each member has.

Transformational leaders encourage creativity and know when to challenge traditions within their business. They’re innovative market disruptors who understand that the only thing consistent in life is change.

Transformational leaders lead by example. They walk the walk, not just talk the talk. These leaders are amazing role models for their team.

What Are the Benefits of Transformational Leadership in Business?

Today’s workforce has new views on what to value in a career—that’s what a pandemic will do. In a recent study done by Ramsey Solutions, over half of the workforce said they would take a pay cut to find work that fits their values more closely.1 They want to work for a mission they can go full throttle for—and that’s where transformational leadership comes in. The team members you serve are hungry for courageous leaders who lean in and do work that matters.

The proof that transformational leadership works is found in:

So. Many. Leadership Styles. Where Does Transformational Leadership Really Fit?

As you dive into leadership, you’ll quickly find that there are more styles than a fashion show. Servant leadership makes a great sidekick to the transformational leadership style. Beyond that, you’ve got styles like transactional, democratic, autocratic, bureaucratic and laissez-faire. Then there’s delegative, authoritarian, strategic, participative and boatloads more. As Michael Scott from The Office would say, “Okay, too many different words coming at me from too many different sentences.”

If you’re trying to peg the style of that really bad boss you never want to have again, or you’re hoping to blend the best of the best leadership ideas styles, then digging in to other styles might matter to you. But if you’re growth-minded and simply want to be a better leader, take a deep breath. You can be confident in knowing that transformational leadership comes out on top for inspiring, stimulating and empowering team members. Here’s why:

Ready to grow as a transformational leader? Step one is to evaluate your current leadership style. You can check out our free Leadership Growth Assessment test to get started on becoming the leader you were born to be!