In the 1970s, American cars ruled the road. Car lovers like me made fun of cheap, compact foreign jobs, like Fiat and Datsun—with good reason, looking at the pictures below! Of course, Datsun went on to become Nissan. And while the latest ad campaign for Fiats still shows a tiny car, the Fiat’s cool factor has increased considerably, at least in part because J. Lo appeared in their commercials a few years ago. 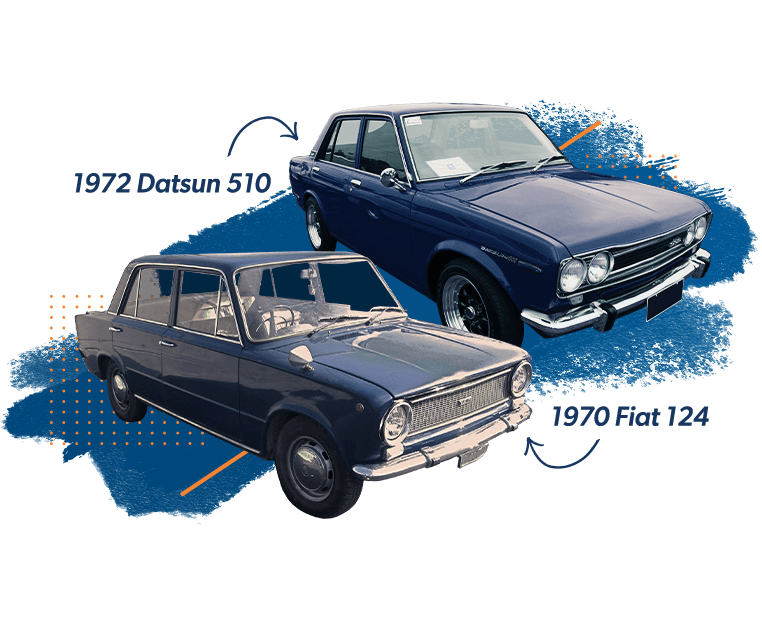 But there’s another kind of Fiat we need to learn about. My friend and bestselling author Stephen Mansfield recently discussed this on his podcast, pointing out the term Fiat is also used in the world of money. He said the term Fiat Money was thrown around as a put-down, a term of disrespect, regarding the U.S. dollar going off the Gold Standard in 1971 at the behest of President Richard Nixon. During that time, people snarled, “The dollar has no real value . . . it’s just Fiat Money!” like it was something they stepped in and couldn’t get off their shoes. But what in the world did that really mean?

With inflation, recession, and crypto-crashing all in the news, it’s a good time to learn about this idea of Fiat and discuss how it relates to the nature and spirit of money.

The literal definition of Fiat is: A decree, a declaration. It makes me think of that great scene in The Office where Michael Scott yells, “I declare bankruptcy!” and then Oscar, the accountant, corrects him, telling him that’s not how you declare bankruptcy. Funny example or not, that is Fiat—a declaration, a decree issued.

I have some pieces of pinkish paper brought to me by a Special Forces Operator after the Gulf War. This paper has pictures of Saddam Hussein on it. Saddam Hussein and the Iraqi government had billions and billions of dollars of gold bars to back their currency. However, the defunct government’s decree that the pinkish paper had value was voided by war and the collapse of that government. The gold did not help the collapse of people’s faith in the ability to use that paper for exchange. It’s now a novelty. The same thing is true of Confederate money from the South during the Civil War.

My friend Rabbi Daniel Lapin says that money is spiritual. I agree. And really, economics is spiritual. TRUST that the thing in question can be exchanged is the only thing that gives it value.

Anyone can make a decree or a declaration. A government declaration generally carries more weight, but anyone can do it. The more people that accept that declaration as fact, the more it can be used as a medium of exchange. The more widely accepted the thing is, the more chance it has to have value.

Gold is only valuable because enough people declared it to have value. This was a cultural declaration—a cultural Fiat. The supply of it (scarcity) versus the demand drives the price. But gold is Fiat Money. People have declared it valuable, and that is the only reason it has value. So, it’s laughable that going off the Fiat Standard of Gold to the Fiat Standard of Green Paper is a sign of the end of days.

Crypto is only valuable because enough people agreed that digits mined in the form of blockchain have value. It ceases to have value when people no longer declare it to have value. This was a cultural declaration. In fact, one of the appeals of crypto is that its Fiat (decree) did not come from a government. But crypto is still Fiat Money. Just because it’s “sophisticated” and non-governmental doesn’t mean the value is derived from anything other than the decree.

It’s so cute to think of some techno nerd screaming in his basement like Michael Scott, “I declare crypto to have value!” Actually, that’s kind of what happened. And enough people agreed to that declaration that a brand-new market was established. Just like when a brand-new government issues paper money after a coup, putting the new president’s face on the paper.

Rabbi Lapin is right: Money is spiritual. It’s based on the agreement by a number of people that declare and decree, with or without a government, that something has value and therefore can be used for exchange.

Native Americans did it with wampum beads. Japanese do it with the yen. People who think they are cool do it with crypto. The whole world does it with the U.S. dollar. In Star Wars, it was the Imperial credit. And on and on we go.

Crypto’s narrow market and youth is its weakness and what makes it akin to gambling right now. Gold’s strength is its long track record and the fact it’s broadly accepted. But gold’s value increase during that long track record is horrible, making it a poor investment. Real estate is widely accepted and has a long track record with increased value over time. The same is true with good growth stock mutual funds.

So, let’s say a decree, a Fiat, is issued by someone. The question is: How much do you trust (spiritual) the decree and why?

I place my trust on:

For 40 years, I have studied and met with wealthy people. Their wealth building seldom comes from following “Get Rich Quick” or “Conspiracy Theory” investments. They stay with tried-and-true simple investments and processes. So, the next time your wild-eyed cousin declares he’s doing something unproven and fringe, all the while spouting something about Fiat Money, you will know to avoid his advice or opinion.

Me? I’ll keep doing what the overwhelming majority of the 10,000 millionaires we surveyed in our Ramsey Solution’s National Study of Millionaires do. It’s what I’ve done for decades. I work hard, demonstrate financial discipline, and invest consistently and wisely over time. I invest in real estate (with no debt) and growth stock mutual funds. And I always use the U.S. dollar to do so. Forty years later, my balance sheet is smiling. Join me in that grin.