After months of back and forth tension, stalemates and political sweet talk, Congress passed Biden’s $1.2 trillion Infrastructure Investment and Jobs Act on November 5. The bill passed with a vote of 228-205 and was officially signed into law by President Biden on November 15th.1

Now, if the word infrastructure makes you think of planes, trains and automobiles, you’re not far off track. This pricey plan would pay for updates to national roads, bridges, railways and the power grid.2 But it also includes things like expanding access to high-speed internet, providing clean drinking water, adding more green energy options, and a whole lot of other things.

Basically, the $1.2 trillion infrastructure bill includes everything and the kitchen sink. Let’s get into in.

The passing of the bill will bring with it updates to things like roads, railways and ports (although no word on whether it’ll effect the clogged global supply chain anytime soon). The bill also covers a lot of routine maintenance work that needs to be done across America, like repairing highways and updating power grids. The White House first announced the act in late July and said the goal was to “grow the economy, enhance our competitiveness, create good jobs, and make our economy more sustainable, resilient, and just.”3 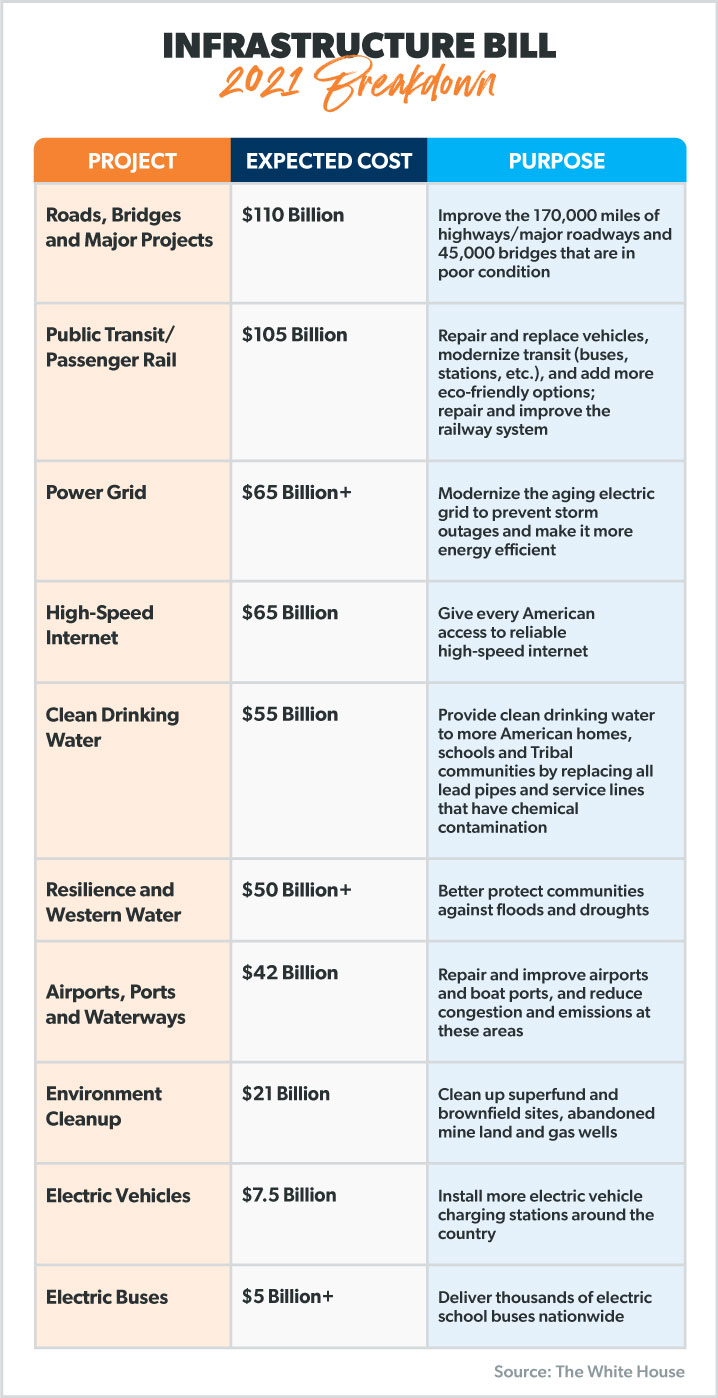 How Did the $1.2 Trillion Infrastructure Bill Become Law?

Let’s rewind back to the summer to hear the tale of the infrastructure bill. After months of talking about it, the Senate finally decided to pass President Joe Biden’s infrastructure bill on August 13. Just one day later, the Senate also passed the spending package that could bring some big changes to America’s current laws. On August 24, the House of Representatives gave the first round of thumbs-ups to both bills and was set to make a final vote by the end of September—aka the end of the government’s fiscal year.

But then, some members of the House went from thumbs-up to thumbs-down. Because of that, the September 30 deadline came and went—and there was still no agreement. And the roughly $4.5 trillion that could have been added to Uncle Sam’s budget was stuck in limbo.

Again, the Infrastructure Investment and Jobs Act had passed in the Senate, and House members gave it the round-one approval in August. (Keep in mind: Bills need to be approved twice in the House before they can move forward.) But it was trapped in a deadlock because some lawmakers were trying to push both bills through together—without having majority agreement on the second bill.4

Long story short: Things were at a stalemate, and the October 31 deadline came and went. Lawmakers tried to find a compromise so that both bills could pass, but it was a no-go.5 That is, until 13 Republicans hopped on board to vote the infrastructure bill through on November 5.6 But even though Capitol Hill might be celebrating this “win” as the year comes to a close—they’ll still have to tackle the debt ceiling issue before they can call it a year—but that’s a story for a different day.

How Does the Infrastructure Bill Impact Biden’s $1.75 Trillion Spending Package?

Here’s the deal: For a while, both bills were linked together in a “you can’t have one without the other” kind of way. But that didn’t fly with some members of either party.

This $1.2 trillion infrastructure bill is more of a bipartisan effort (13 Republicans voted for it and six Democrats didn’t).7  Those six Democrats who voted no were holding out because of the spending bill and basically said, “Nope, it’s a package deal.” They refused to vote to approve the $1.2 trillion bill unless Build Back Better was approved first.8 And . . . it wasn’t.

The $1.75 trillion Build Back Better bill (originally $3.5 trillion when it was first proposed) focuses on more progressive efforts, like climate change, health care and education initiatives. And it’s this bill—and its bigger price tag—that’s getting a bit more pushback from lawmakers on both sides of the aisle.9 More moderate Democrats—and all Republican lawmakers—are against the $1.75 trillion spending package. Many argue that it was too much money at the start ($3.5 trillion), and others didn’t want to push it through until the $1.2 trillion package was taken care of first.

Despite the huge price tag, The White House says the Infrastructure Investment and Jobs Act combined with the Build Back Better bill will add an average of 1.5 million jobs per year over the next 10 years.10

That’s the trillion-dollar question on everyone’s mind. The two senators who led the negotiations for the $1.2 trillion infrastructure plan say that it comes with $519 billion of offsets—which means they actually have a plan to pay for about half of the cost.11

That plan involves using leftover money that was set aside for emergency COVID-19 relief—like unemployment benefits—and money from delaying the Medicare rebate, corporate tax fees and new tax regulations on cryptocurrencies.12But they also claim that this plan will create about $53 billion of economic growth, which is pretty much saying it will kind of pay for itself.13

But . . . that’s not enough to cover $1.2 trillion (let alone nearly $3 trillion if both bills become law). So, where’s the rest of the funding coming from? Well . . . no one seems to exactly know. President Biden has suggested some of it will be paid for by taxing some of the largest corporations (including 55 companies who “didn’t pay a single penny in federal income tax­”) and households earning more than $400,000 a year.14

Even with all that “planning,” though, the infrastructure bill is still expected to add at least $256 billion to America’s debt between now and 2031.15 You can just imagine Uncle Sam swiping his credit card for all those new roads and bridges, not thinking too hard about how he’s going to actually pay for it.

How Could the Infrastructure Plan Affect Your Wallet?

All that might sound pretty good at first, but this infrastructure bill (and its hefty price tag) isn’t all sunshine and rainbows. Like we said before, the infrastructure bill will add billions of dollars to the government’s mounting pile of debt. And when the collectors start calling Uncle Sam, he’s going to need to figure out some way to pay up. And that’s where it might start hitting your wallet:

Look, you can’t force Uncle Sam to get smart with his money. But you can take control of your own. The government is never going to take care of you as well as you can take care of yourself, and that’s why it’s so important that you get out—and stay out—of debt, build up your savings, and invest wisely.

If you’re out of debt and have 3–6 months of expenses saved up, you should be investing at least 15% of your income in a good retirement account that will best fit your needs. That way, when it comes time for you to retire, you’ll have your own money and you won’t have to worry about disappearing Social Security funds. Take that, government!

Not sure how to plan for retirement? Connect with a trusted investment professional to start looking at your options. We recommend SmartVestor Pros. These experts will work with your individual needs and help you build wealth—and confidence—for your future.