If you turn to CNBC or Fox Business, you might hear a Wall Street expert or news anchor throw out strange financial terms from time to time. One of those terms you might hear popping up again and again is something called the yield curve.

While it sounds more like a traffic phrase than a financial expression, the yield curve is actually a tool that financial experts like to use to measure the health of the overall economy. Like meteorologists looking at patterns in the atmosphere to predict whether or not it’s going to rain this weekend, these Wall Street junkies love talking about the yield curve as a sign of things to come.

While the yield curve isn’t exactly a crystal ball, it’s worth learning a little more about the yield curve so that when you hear it on TV, you know what the flip they’re talking about!

What Is the Yield Curve?

Basically, the yield curve is just a graph that lets you know what kind of interest rates you can expect for lending money to the U.S. government (by buying U.S. Treasury bonds) over different periods of time (maturity dates).

We filter out sleazy advisors. See up to five investing pros we trust.

The shape of the curve on that graph depends on what the current interest rates are for short-term and long-term Treasury bonds. Before we talk about those shapes, let’s define some key terms like yields and maturity dates.

You could also find what the current yield rates are by going to the U.S. Treasury’s website, which shows the differences between long-term and short-term bonds.1

On a yield curve graph, those yields will be charted on the vertical axis of the graph.

Now, on the horizontal axis of a yield curve graph, you’ll see the bond’s maturity date—that’s when the government will pay you back the original amount you lent to them (while paying you interest along the way). A U.S. Treasury bond can mature anywhere from one month to 30 years.

While U.S. Treasury bonds are usually considered one of the safest investments you can make (not that we recommend them), it’s a little riskier to lend the government money for a longer period of time than a shorter period of time. After all, a lot more can happen in 30 years than in six months (changes in inflation, the cost of the dollar and other factors)! So, the government will normally pay you more in interest for longer-term bonds because you’re taking on that additional risk.

When it comes to the yield curve, the shape of the curve matters . . . a lot. At any given time, the yield curve can either be a normal curve, a flat (or flattening) curve or an inverted curve. Each of those curves looks a little bit different, and they tell us something different about what’s happening in the economy.

Let’s talk about each of those curves and what each of them tells us about the economy.

Why is that “normal”? There are lots of theories about this, but it boils down to this: When investors lend money for longer periods of time, they’re taking on more risk. That means they expect to be rewarded with higher interest rates for taking on that extra risk. 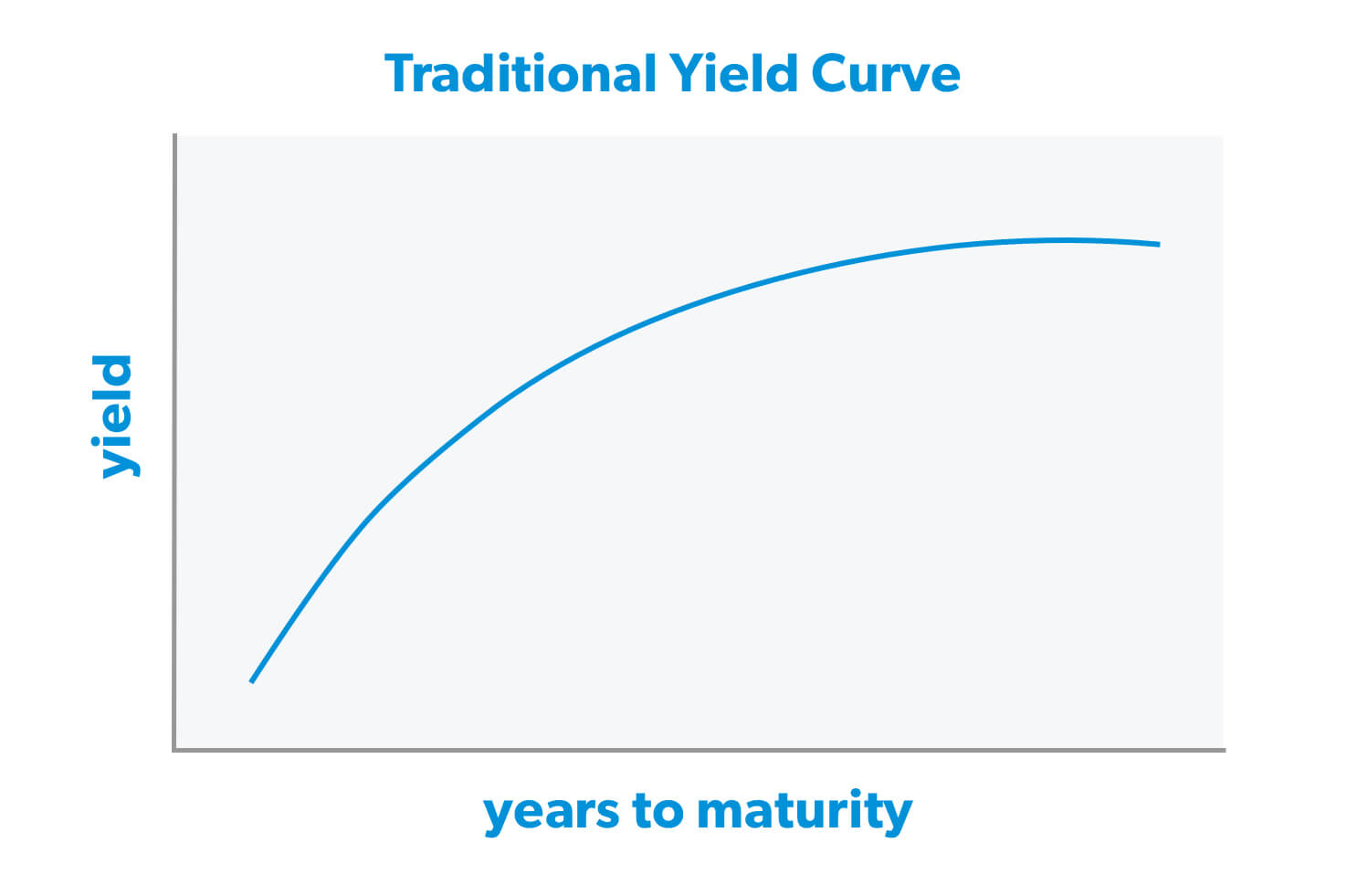 A flat, or “flattening,” yield curve might cause some Spidey-senses on Wall Street to start tingling. That means the difference between the yields for short-term and long-term U.S. Treasury bonds is shrinking to the point where you might get a similar interest rate for a six-month bond and a 30-year bond.

When that difference is shrinking, that usually means the yield curve is flattening. And that means you’re no longer being rewarded for taking on the extra risk of a long-term bond. Here’s what a flat yield curve might look like: 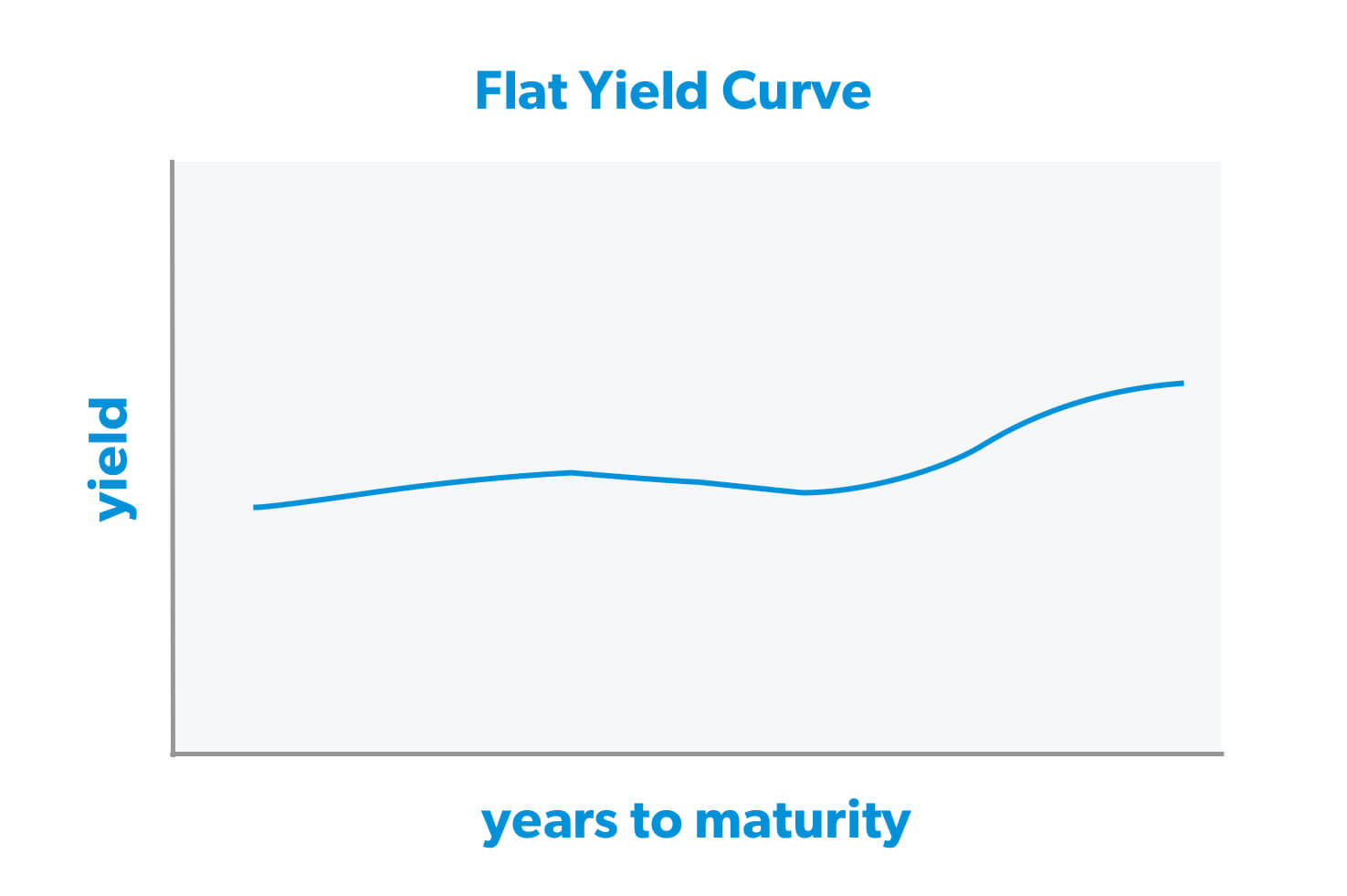 Here’s where some investors might go into a little bit of a panic. An inverted yield curve—where the curve is sloping down instead of up—means that yields for short-term bonds are higher than long-term bonds.

Some experts suggest that an inverted yield curve might happen when investors are more pessimistic about the stock market’s outlook over the long term. Others say that it’s simply a case of supply and demand—more people want to buy bonds, so the government can afford to sell them at lower interest rates. The jury’s still out on that.

This is what the dreaded inverted yield curve looks like: 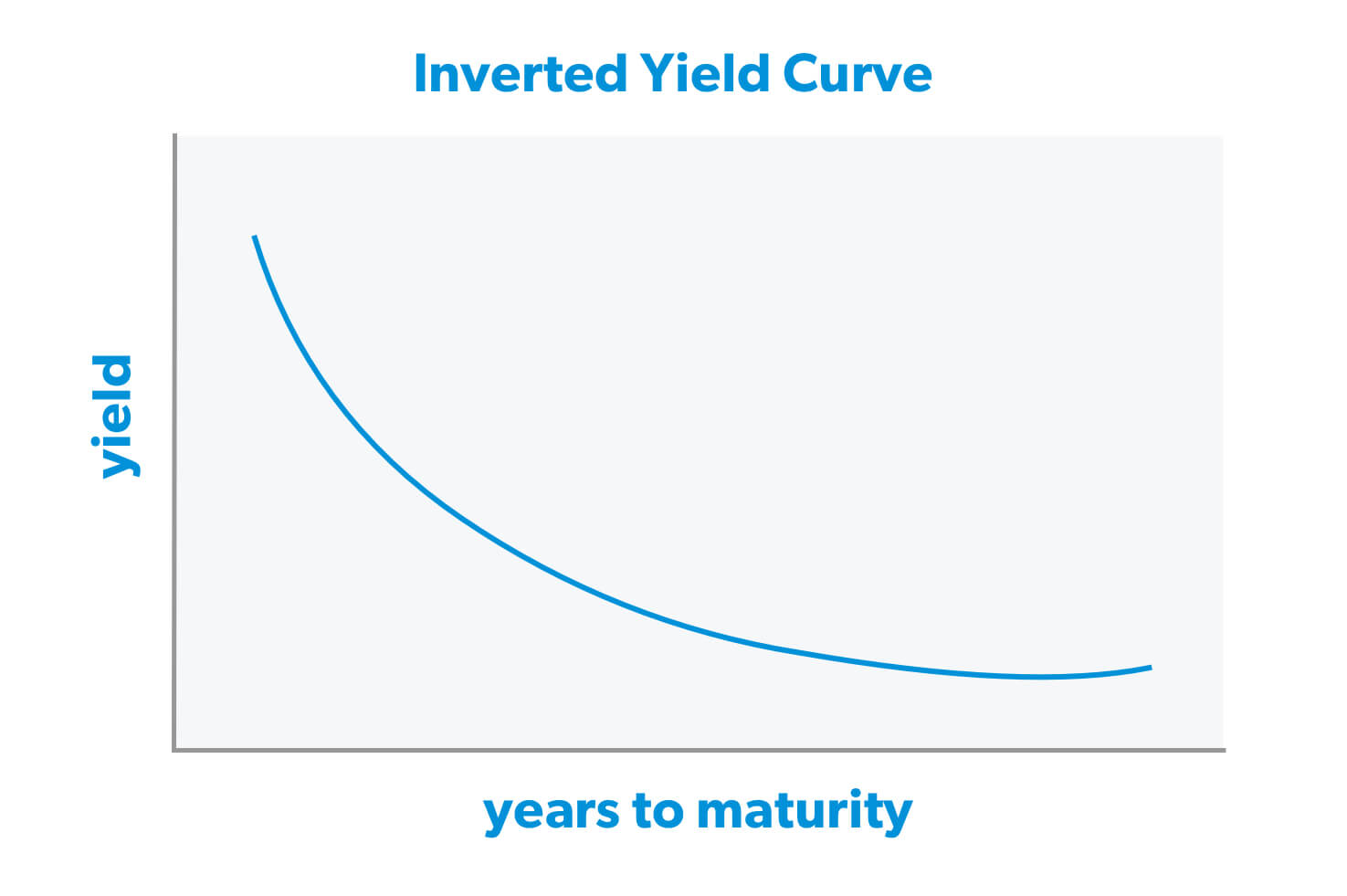 Why Does the Shape of the Yield Curve Matter?

Here’s why an inverted yield curve makes seasoned investors shake in their tailored suits: It’s a classic signal that a recession or bear market might be coming soon.

In fact, the yield curve inverted a year or two before every recession in the last 50 years . . . kind of like an economic grim reaper.2

Still, an inverted yield curve that lasts for a few weeks or months might be a sign that there might be some choppy economic waters ahead.

How to Prepare Financially for a Recession

But no matter what shape the yield curve is, you should always be trying to recession-proof your finances so that you’re financially prepared for whatever happens with the economy.

Here are some things you can do right now to do just that:

Here’s a Better Way to Invest

And speaking of investing, we’ve been talking a lot about government bonds here . . . but the truth is you’re better off staying away from investing in any kind of bonds.

With interest rates sitting at historic lows, government bonds are not exactly a great place to see your money grow. And even in the best of times, bond returns are barely enough to keep up with inflation, let alone help you build a big nest egg.

Instead, try diversifying your investments across these four types of mutual funds: growth and income, growth, aggressive growth, and international.

Let’s do a quick comparison. If you sunk $10,000 into 30-year U.S. Treasury bonds that have a 5% average annual rate of return (or yield), you’d end up with right around $45,000 once the government returns the money to you. Those aren’t numbers to brag home about! A 5% rate of return is barely enough to keep up with inflation, let alone give you a nest egg that will help you retire comfortably.

The stock market historically has an average annual rate of return between 10–12%.3 So what if you invested that $10,000 in good growth stock mutual funds instead? If you didn’t invest another dime, you could still wind up with around $267,000. That’s more than five times what you might get from investing in a U.S. Treasury bond over the long haul!

Work With a Financial Advisor You Can Trust

If you’re looking for a way to invest for retirement, then you need to get connected with a financial advisor you can trust. You want someone in your corner who can guide you and keep you on track no matter what everyone’s saying about the yield curve this week.

That’s why the SmartVestor program exists—to connect you with a pro in your area who can sit down with you and make sense of all your options.

Your future is too important for guesswork. Get help from a SmartVestor Pro today.
Find Your Pro

Your future is too important for guesswork. Get help from a SmartVestor Pro today.
Find Your Pro