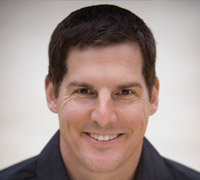 Living a Life of Weird Craig Groeschel, pastor of Lifechurch.tv, encourages people to move past the stress of normal life into something more...weird.

Around Dave Ramsey’s office, “weird” is a compliment. For years, Dave has been preaching that being weird is a virtue and that “normal” in today’s culture is broke.

Well, Craig Groeschel agrees. As the pastor of Lifechurch.tv, a booming multi-site church headquartered in Oklahoma City, Craig knows a thing or two about being weird. You don’t become the pastor of one of the largest and most influential churches in America without doing things a little differently.

In his new book titled (you guessed it) Weird, Craig talks about how to move past the stress and exhaustion of our normal lives into something more…weird.

Most people would hate to be called weird, but you seem to like it. Explain.

Craig Groeschel: For my whole life, I pursued normal. One of my biggest goals was to “fit in.” When I started studying scripture, God led me away from normal to a life of “weird.”

One girl was making fun of me and told me I should meet another girl who was equally as weird (and “overboard for God”). That’s how I met my wife, Amy. We’ve committed to a life of weird.

Get expert money advice to reach your money goals faster!

In terms of the way we live—our money, our health, our relationships, our schedules—why do you say it’s a good thing for us to desire to be weird?

Craig Groeschel: Well, to put it simply, because “normal” isn’t working—at least certainly not in the culture we live in.

According to Jesus in Matthew 7:13-14, most people are on the broad road with the crowd. They find comfort in the crowd. But those on the narrow road—the different—are the ones who truly find life.

One of the things you talk about as being normal is busyness. In our culture, we’re all extremely busy and can hardly stop to take a breath. Can you expand on what you say about how we equate busyness with importance?

Craig Groeschel: The most common response I hear to the question, “How are you doing?” is “Busy.”

Everyone is busy. But busy doesn’t equal importance. Busy doesn’t necessarily equal productivity. Most of the time, normal people faced with an invitation to do something ask themselves, “Can I do it?” A weird person might ask, “Should I do it?” Weird people know that you can do more by doing less.

When writing this book one Friday (on my day off), my daughter Joy asked me to play “Go Fish.” I brushed her off doing my more “important” work. Joy looked at me and said passionately, “Daddy, I’m only going to be six years old for a short time! Don’t miss it!”

I closed my laptop—refusing to be too busy for what was most important.

In the book, I share the story of Mary and Martha from Luke 10. Both of these two sisters fully understand the significance of Jesus and of his presence in their lives. They both believe he is the Son of God, and they’re both thrilled to welcome him to their home. Martha is intent on making the best impression on Jesus she can, so she busies herself with preparations. Mary sat down and enjoyed Jesus. Like most of us, Martha was convinced what she was doing was right! According to Jesus, it’s Mary who chose the better thing. How has our culture misunderstood what it really means to be “rich?”

Having the privilege to visit other places in the world, places where people struggle in genuine poverty, has dramatically changed my perspective. You have to think about how they must view things that we take for granted. To them, we’re so rich because we own cars and have little houses for them—called “garages”—like they’re pets!

We’re so rich that we pay people to prepare food and serve it to us. If you’re picturing a household with a chef and a butler, not so fast—I’m of course talking about restaurants. We’re so rich that most of us have a little room in our houses that nobody stays in; we just keep clothes there. We call these rooms “closets.” All of these are things we consider normal just because everybody around us has them, but they’re actually unique in much of the world.

Don’t settle for material riches! God wants to make you rich in friendships! Rich in impact. Rich in your marriage. Rich in generosity.

Second Corinthians 9:11 says, “You will be made rich in every way so that you can be generous on every occasion, and through us your generosity will result in thanksgiving to God.”

Explain how you have changed the way in which you do your New Year’s resolutions.

Craig Groeschel: I had a weird thought. What if, instead of a list, I focused all of my attention on just one singular goal? If I worked on it a little over time, maybe it wouldn’t become so overwhelming. But that presented another problem: with so many areas I wanted to change, how could I pick just one? So I started by praying, asking God, “What’s the one thing you want to be different in my life next year?”

That’s what I do every year now, and you know what? He always tells me something. One thing will emerge that’s the obvious one part of my life—one part of my heart—that he’s after. Instead of spreading my good intentions all over a huge list, I focus on just that one thing.

It’s weird how this works. When you focus on just one thing with singular intensity, with will and intentionality, that one thing actually changes. In five years, you’ve completely changed five big chunks of your life. In a decade, the landscape of your life looks dramatically different. I’m convinced now that if you’ll ask God to give you each of your “one things,” then in 10 years, you’ll be 10 huge steps closer to the person He wants you to be.

What does it take to be a “weird” parent?

This is not a bad place to start, but it shouldn’t be our end goal. What if we succeed and raise well-rounded, well-educated happy people? But what if our children don’t know Christ? If that’s what happens, we’ve failed. We aimed at all kinds of things except the one target that matters.

A weird parent intentionally sets long-term goals around gradually transferring a child’s dependence on the parents to dependence on God.

You talk about a paradox that Dave also discusses—that the more you give, the richer you become. Can you explain that?

Craig Groeschel: I call this developing “a generous eye.” Proverbs 22:9 says, “He who has a generous eye will be blessed.”

Luke 6:38 makes it clear that there’s a cause-effect relationship between what we are willing to give and how God will bless us in response: “with the measure you use, it will be measured to you.”

What I’m talking about is not some kind of strategy to try to “game God’s system.” I’d also like to make clear that it would be a horrible, cheapening mistake to misinterpret these passages as being just about money. While certainly God may choose to bless us with material things (and of course many passages in scripture offer evidence of this), that’s only one tiny fraction of how he might choose to engage with us.

I tell a story in the book about an amazing group of people in Ecuador. We had gone there to serve these people living in profound poverty, where one of their only means of income is making formal dresses to sell. On our last day there, they wanted to bless one of my daughters with the gift of one of these extremely nice dresses. I felt horribly guilty because we already have everything we need, and honestly, we have more than enough.

But our translator helped me understand that it would hurt these precious people deeply if we wouldn’t accept it, and only as a gift. They saw the opportunity to give as an act of worship to the God who had given them so much. Through that experience, God demonstrated to all of us that he has plenty, and he loves to lavish it on us.

This was not a material gift to anyone in our family, either from them or from God. Instead, it was an extravagant expression of love that has forever bonded my entire family to those who gave it. It has become genuinely priceless to us as a family heirloom, one we will pass down for generations, not because of what it’s “worth” in terms of dollars, but because of its story.