That’s how dealerships rope you in . . . with the flashy promise of a nice car without all the extra strings attached. But when it comes to buying a car, the only way to do it without strings attached is to pay cash. (Psst—cash is always king.) We’re going to break down the basics of zero percent financing: what it is, how it works, who qualifies for it, and how to live without it.

What Is Zero Percent Financing?

Zero percent financing is a loan that doesn’t charge interest (for a period of time). At best, it’s a fancy marketing tactic dealerships (and other businesses) use just to get people in the door. And at worst, it’s a loan that offers you the opportunity to buy something you can’t afford with money you don’t have. This tactic is a great way to get people to purchase on the spot—with seemingly no consequences (at least up front).

Avoid the traps and manage your money the right way with Financial Peace University.

The interest rate on this type of loan usually stays at 0% for anywhere from six months up to a few years. But there’s no such thing as a free ride, right? After the promotional period ends, the loan balance must be paid at a much higher interest rate.

How Does Zero Percent Financing Work?

Let’s say you test-drive that new-to-you Ford Explorer and the salesman asks you to head over to his desk for a “little chat.” You know what that means. He says that for the low, low price of $14,500, that pretty black Explorer is all yours. And to sweeten the deal, he says you can get it with zero percent financing for 14 months—if you qualify, of course (more on that later).

Sounds pretty awesome, right? Well sure, on the surface. People want to pay for interest as much as they want to pay for shipping (and no one likes paying for shipping). Car loans with zero percent financing are advertised as an awesome deal for you, but it’s the dealership who’s really benefiting. They use offers like this to drive sales on a slow-selling model or help make room for new inventory.

You might be thinking, What’s so wrong with that? Well, what I don’t want you to think is that zero percent financing is a screaming deal. Or that it’s free. Listen to me closely: Nothing is free. When it comes to zero percent financing, you’re actually paying more than you should in three different ways:

Most zero percent financing “deals” are only offered on cars selling at full price. That means you can’t take advantage of a sale and you can’t negotiate. Some dealerships even mark up the price because they know they won’t make as much money on interest.

You’re much more likely to overspend when you use zero percent financing to buy something. You’ll probably spring for the upgrades and extra features because, hey, you’re not paying interest, right?

For example, let’s say you qualify for a 45-month zero percent financing loan on a $27,000 used car. At first, you’re able to make your $648 payments just fine. But then something happens—you lose your job, there’s a health crisis in the family, or, I don’t know, there’s a global pandemic—and you can’t make the payment a few times over the course of the loan. Since you missed your payments, you can say goodbye to that zero percent financing promotion. Now the real annual percent rate kicks in—and it’s going to hurt. Average current used car loan rates for buyers are landing at 8.62%.3 Ouch! That would bring your monthly payment to $703.32 per month for the rest of the loan, not including any late fees they may have tacked on. You guys, when you’re already missing payments, adding $100 per month on top of that is definitely not going to help. Depending on the loan agreement, you might also have to pay interest on the full loan amount—even after what you’ve already paid. Why take the risk?

You might be thinking you can outsmart the system. You might think you’ll be the one who beats these guys at their own game. But they created the game, and they make the rules! They know that, and more often than not, people don’t pay the money back in time and end up getting slammed with all that interest.

Whether it’s 45 months or 70 months, a lot of life can happen, and it’s just not worth taking on that kind of debt for a vehicle that’s rapidly going down in value.

Who Qualifies for Zero Percent Financing?

Here’s the catch: In order to qualify for zero percent financing, you’ll need a very high credit score. The exact range will vary depending on who you’re shopping with, but they’re not handing out this type of loan to someone who doesn’t already have a proven track record with debt. (A credit score is just an “I love debt” score that measures how you’ve interacted with debt in the past.)

By the way, if your credit score is higher than the number in your bank account, that’s a problem. Don’t live your life worshipping at the altar of the almighty FICO—you can live without a credit score! I don’t care what our society says, it’s absolutely possible to save up, pay with your own money, and avoid the stress of debt altogether. Trust me, you’ll be happy you did.

Is Zero Percent Financing Worth It?

Nope. No matter what you’re financing, the best way to purchase anything is with cash! That’s right. There’s absolutely nothing better than buying something outright with money you have—especially if it’s in the budget. You don’t have to worry about how you’re going to pay for it later . . . because it’s already paid for!

Zero percent financing might sound like a great deal up front. But the truth is, it’s still debt! You’re still making payments on something (even if you don’t have to pay interest at first). All zero percent financing means is that you’re signing up for a payment on something you can’t afford. If you could afford it, you wouldn’t need a loan. Trust me, paying for things with cash makes life simple and stress-free.

How to Live Without Zero Percent Financing

Let’s go back to that average $648 new-car payment. If you took that payment each month and saved it instead, you’d have $15,552 in cash to spend on a reliable used car in two years. But why wait that long? Pick up a side hustle, cut back on eating out, and kick it up a notch! If you bumped that savings up to $900 a month, you could get a $16,200 car in just 18 months! 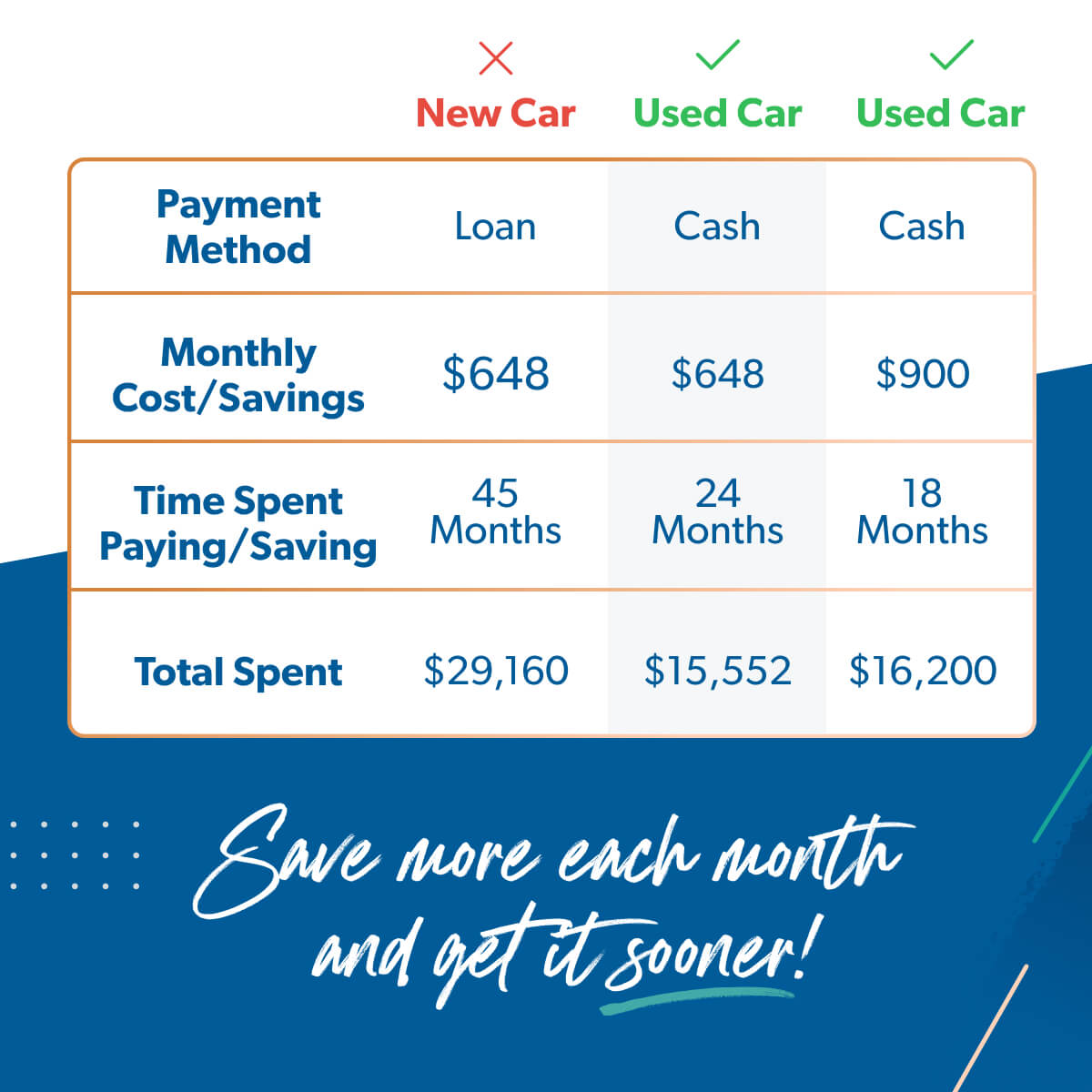 I know that saving up and paying cash for something (especially a car) is the opposite of what most people do. But most people are broke! And once the car is yours—like actually yours, fully paid for—just imagine the good things you can do with that money instead of throwing it away on a car payment. You can do things you actually want to do, like fund your retirement, give more to causes you care about, or even go on a family vacation.

Paying for large purchases without debt might sound crazy, but I’ve seen millions of families at all levels of income do it. So, go for it! If anyone tells you how wrong and crazy you are, just tell them you have zero percent interest in their opinion.

The best way to save for a new-to-you car is by sticking to a budget. I know, I know. A budget sounds like a list of rules for how you can and can’t spend your money. But you guys, it’s not like that at all! A budget (especially a zero-based budget) gives you permission to spend! And when it comes to saving for something as big as a car, a budget will help you keep track of every single dollar until you’re driving off the lot at your local dealership. Download EveryDollar for free today and start saving. It’ll change the way you handle money—for the better!