If you and your spouse argue over money, you’re not alone. It’s the number one issue married couples fight about. In fact, money fights are the second leading cause of divorce, behind infidelity.

In late 2017, Ramsey Solutions conducted a study of more than 1,000 U.S. adults to gain understanding of personal finance behaviors and attitudes, as well as how married couples communicate and relate about money.

So, why are couples fighting about money so much?

A peek into their bank accounts may provide an answer.

Bringing debt into marriage is trending upward over time, with younger generations having much more debt than the generations that came before them. Forty-three percent (43%) of couples married more than 25 years started off in debt, while 86% of couples married five years or less started off in the red—twice the number of their older counterparts. 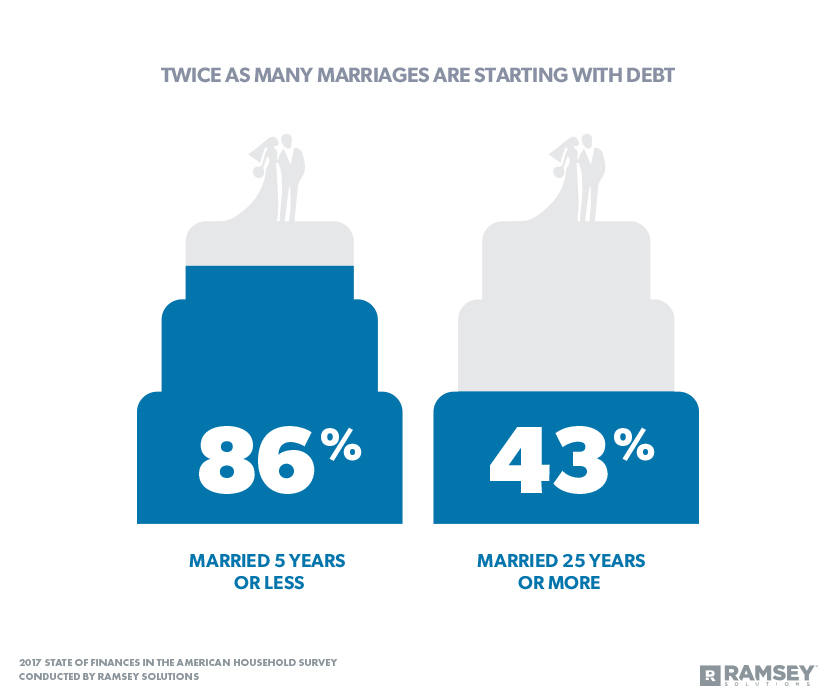 Not only that, but more couples in the younger generations accumulated debt to pay for their wedding than older generations. Forty-one percent (41%) of those married five years or less say they felt pressured to spend more than they could afford on their wedding. Over half (54%) of couples married five years or less say some of their wedding expenses were covered with a credit card—and 73% of those couples say they regret that decision.

“Couples who are just starting out need the best foundation possible if they’re going to have a strong, long-lasting marriage. Unfortunately, debt keeps couples in the past and prevents them from focusing on their futures,” said Rachel Cruze, #1 New York Times best-selling author and personal finance expert.

“When a husband and wife can eliminate debt, a shift happens in their marriage. There’s a peace of mind they haven’t experienced before.”

The larger a couple’s debt, the more likely they were to say money is one of the top issues they fight about. Almost half (48%) of couples with $50,000 or more in consumer debt say money is a top reason for arguments. And those with $50,000 or more in debt were three times more likely than couples with less than $10,000 in debt to say the tone of their money conversations is negative. 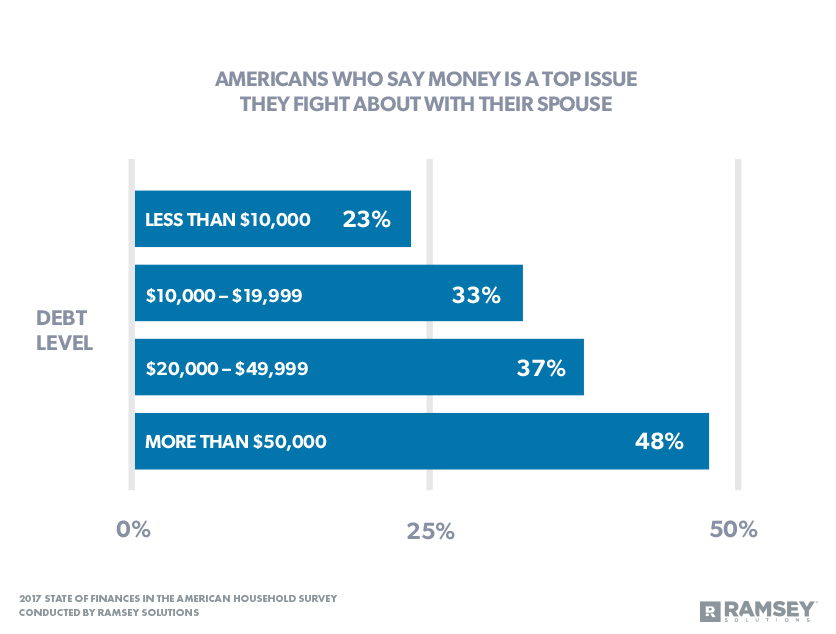 Debt is not the only financial pain point for couples. One-third of people who say they argued with their spouse about money say they hid a purchase from their spouse because they knew their partner would not approve. 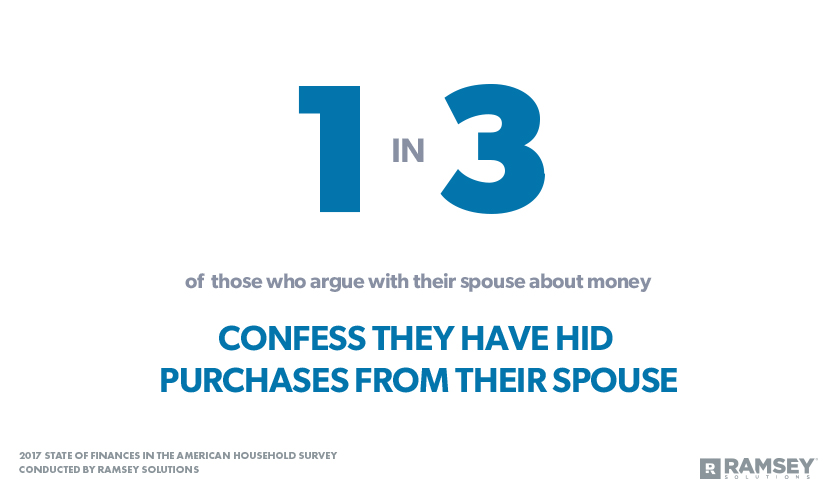 “When a spouse hides purchases from their partner, it breaks down the trust in their relationship. Couples need to understand their money differences, like who’s the spender and who’s the saver, so they can be on the same page with their finances.”

Common Goals and Planning Together Make a Difference 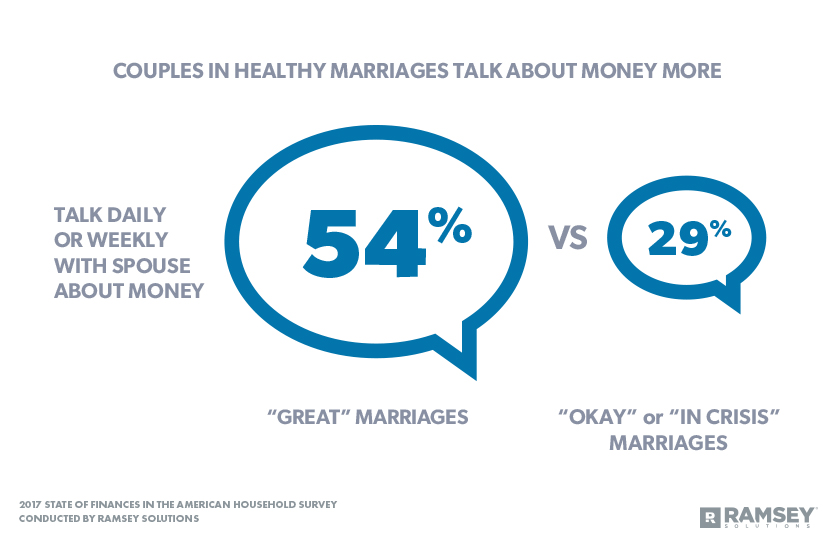 “Couples who take a team approach to their finances are more likely to achieve their goals. Doing a monthly budget together and talking about it regularly are the first steps in making that a reality. These budget meetings open the door to more meaningful conversations about their dreams,” said Cruze.

Emotions Are Barriers to Communication

Emotions surrounding money—especially debt—may be one of the barriers between spouses when it comes to talking about their finances. Almost half (47%) of respondents with consumer debt say their level of debt creates stress and anxiety. Sixty percent (60%) of those with consumer debt say they worry about finances monthly, and one in four say they worry about finances every day.

Not only is debt causing anxiety, but it’s also causing embarrassment. Forty-three percent (43%) of respondents with $50,000 or more in debt feel embarrassed about talking about personal finances compared to only 10% of those who are debt-free.

“Holding on to the emotions that come with debt will cripple you and keep you from improving your money situation,” said Cruze. “Yes, facing the past can be embarrassing, but acknowledging the problem is the first step in winning with money.”

There is hope for couples who want to work on better communication around money. When couples get on the same page—through talking regularly, making money goals, and discussing dreams together—they build a strong foundation for their relationship. Working with each other (instead of against) reduces anxiety and fosters healthier relationships.

“Talking about money is often more valuable than the money itself,” Cruze said.

The State of Finances in the American Household is a research study conducted with 1,072 U.S. adults to gain an understanding of personal finance behaviors and attitudes, and how money impacts relationships. Attitudinal-based statistics include only those with an opinion on the topic. The nationally representative sample was fielded November 29, 2017, to December 5, 2017, using a third-party research panel.

Debt-free defined in this study does not include mortgage debt.