While America is listed among the world’s richest nations, the average American debt continues to weigh its citizens down. Almost three out of four Americans (72%) say they are burdened by debt, including mortgages. And two- thirds of Americans (66%) reported consumer debt, with an average of $34,055 debt load per person.

In late 2017, Ramsey Solutions conducted a study of more than 1,000 U.S. adults to gain understanding of personal finance behaviors and attitudes, including the level of debt across generations and income levels.

Generation X is the most indebted generation overall, but when it comes to consumer debt, Millennials are less than $2,700 behind, on average. 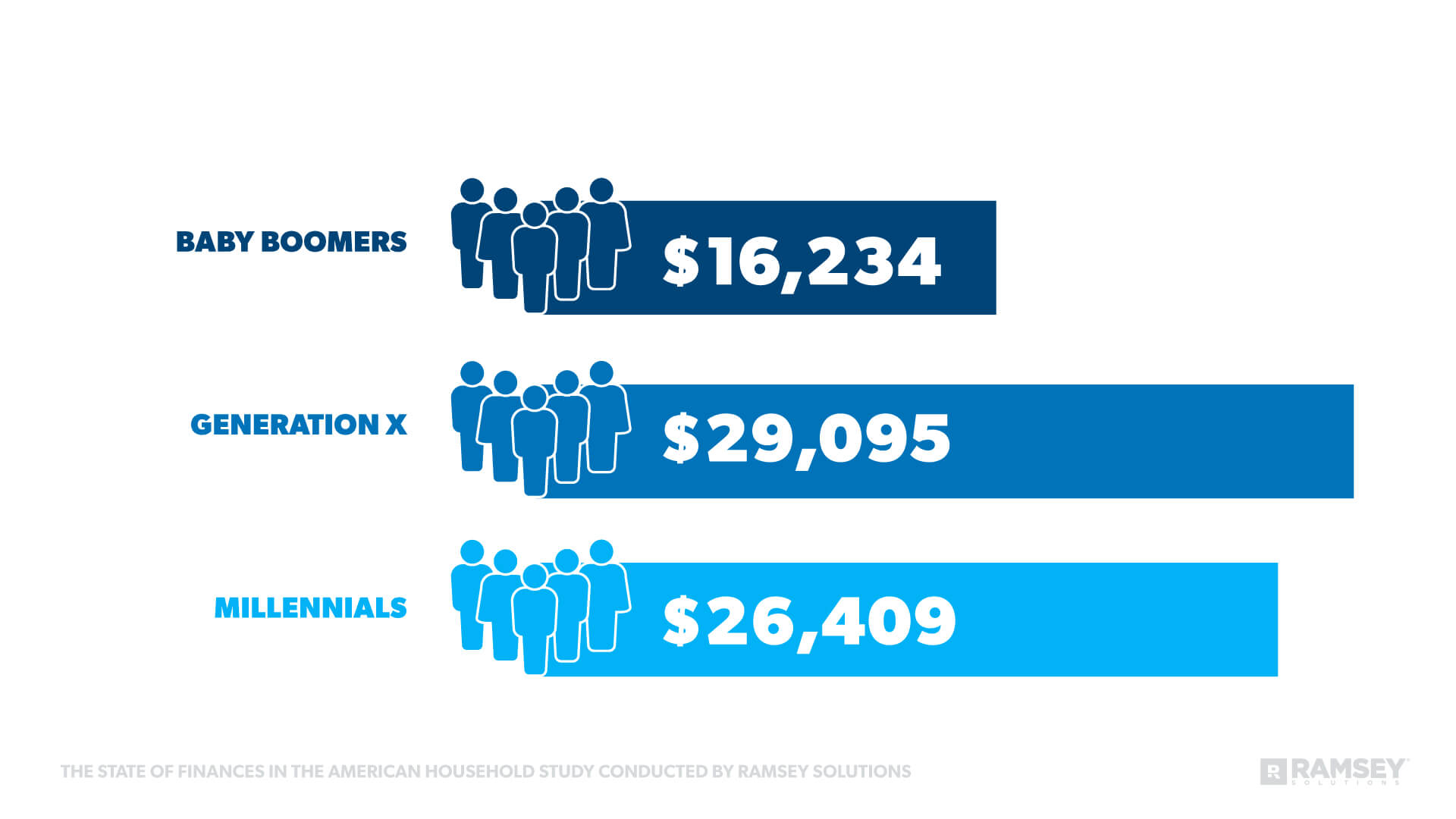 The study uncovered that consumer debt plagues a large percentage of every generation, but thus far, Millennials are taking on less mortgage debt than other age groups. 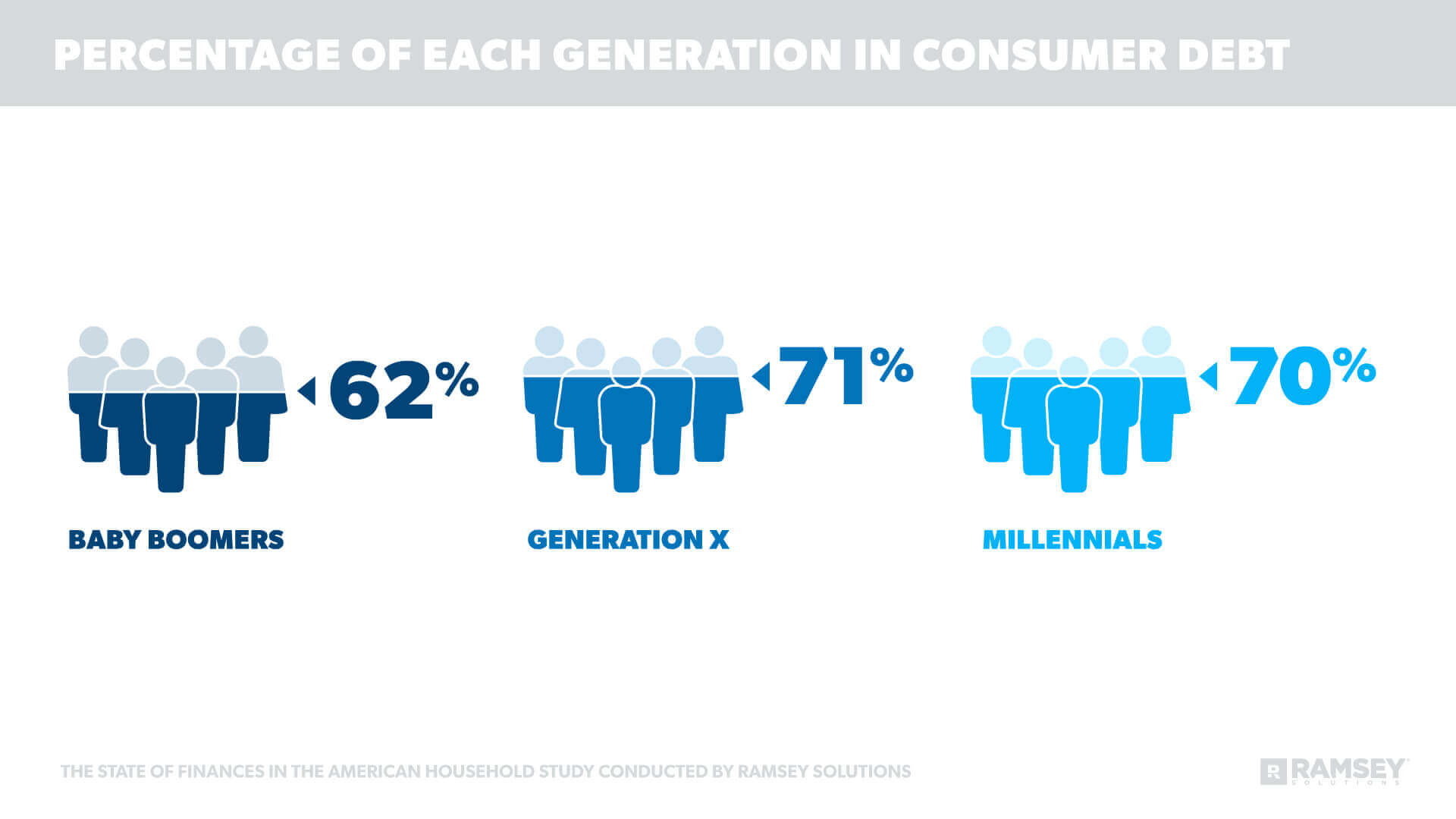 “It’s clearly not just Millennials with a debt problem; all generations need to stop taking on debt and work to become debt-free.“

Consumer Debt Is Not an Income Problem

As household income increased, so did the average amount of consumer debt, with the exception of one income group. 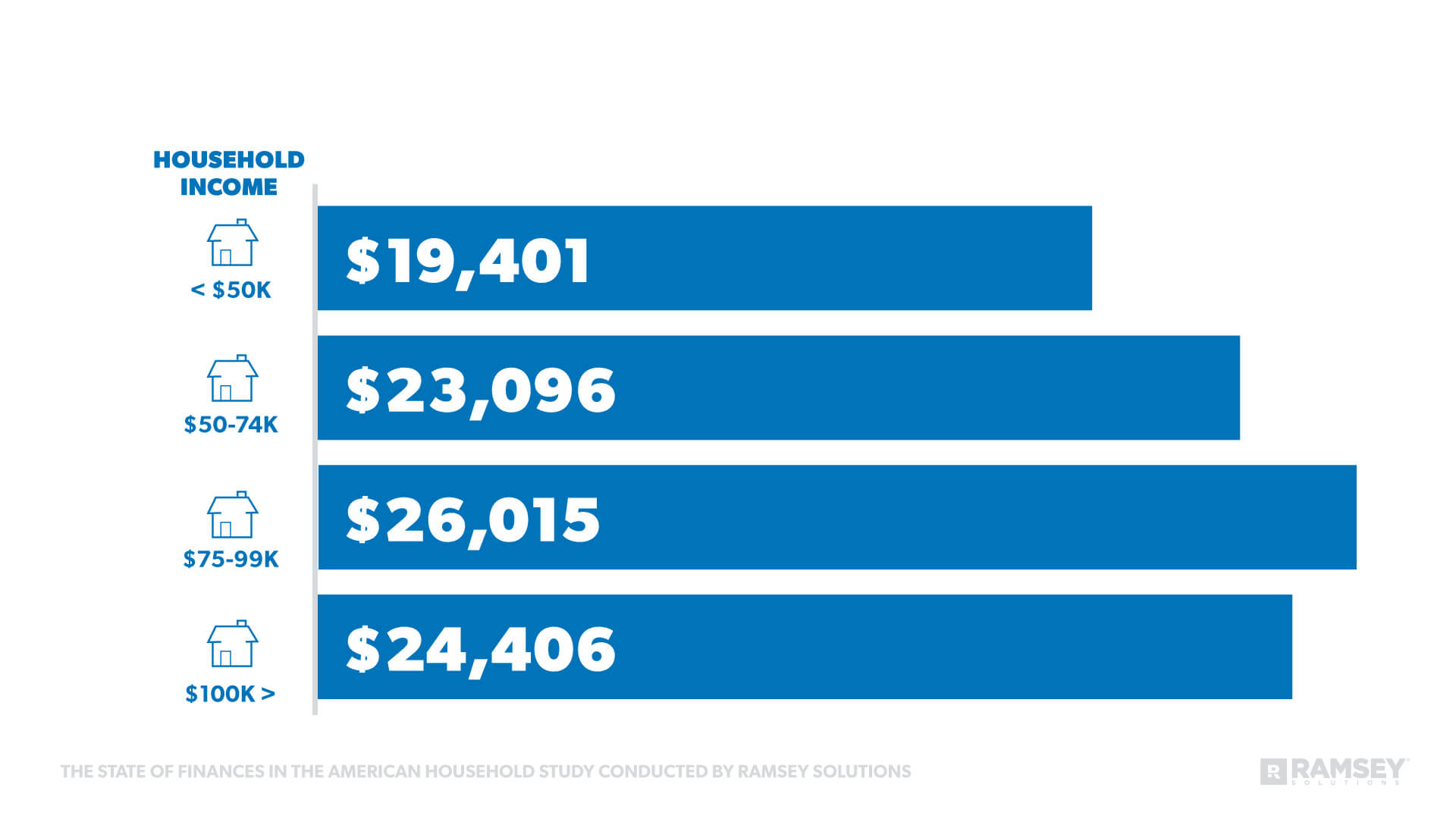 “People often think that when their income increases, their lifestyles should too. But that’s not true. Raises give us the opportunity to invest in our futures, whether that’s paying off debt, building an emergency fund, or saving for retirement,“ said Cruze.

Credit Cards: The Most Common Source of Debt Across Generations

All generations carry credit card debt, but Gen Xers lead the way, with 59% of them reporting that type of debt. One-half of Millennials reported having credit card debt, and Baby Boomers followed closely behind with 46%.

While credit card debt is the most common source of debt, according to the survey, other forms of debt were also reported. Below are other sources of debt across generations. 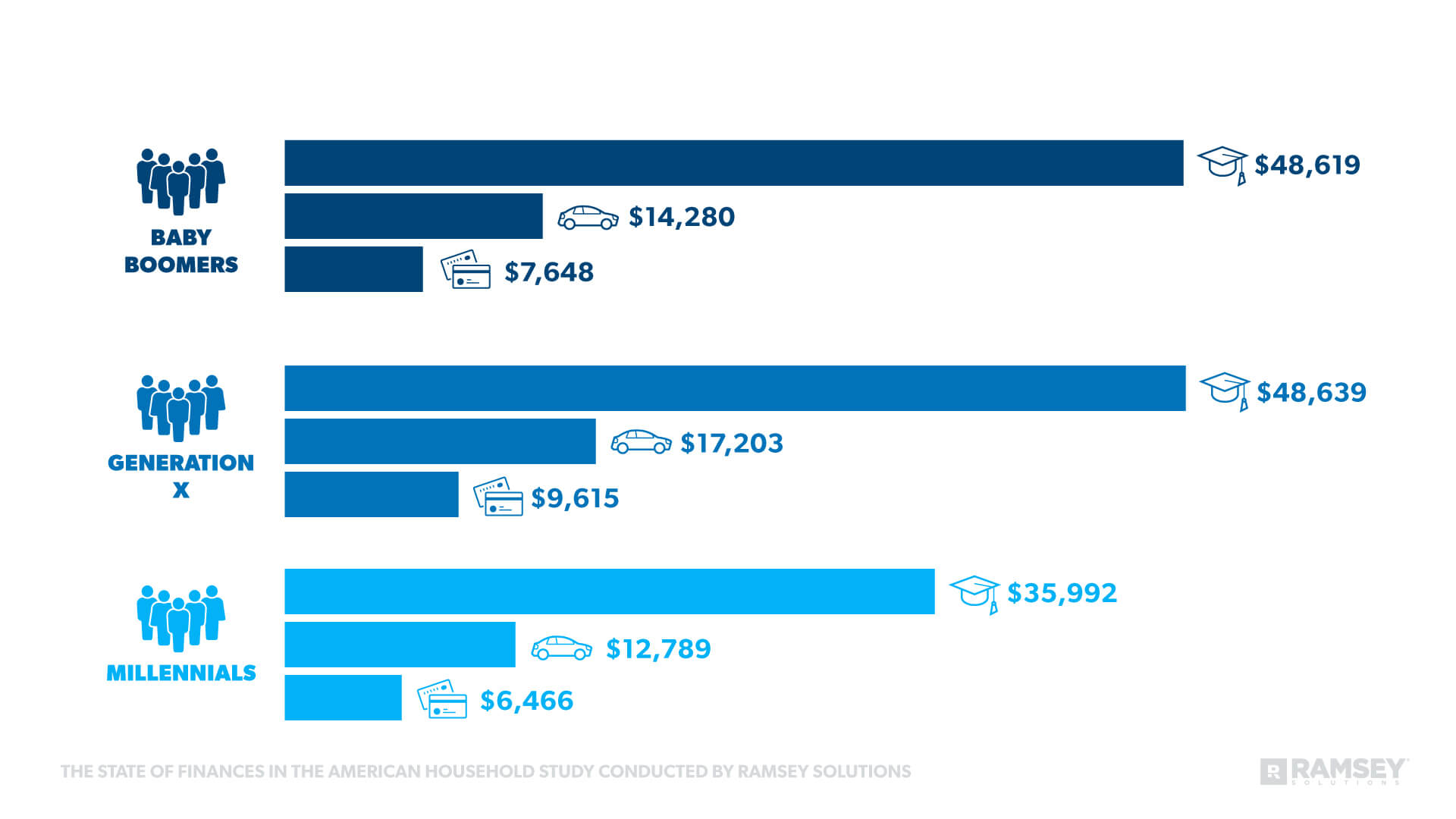 The numbers reveal that Generation X carries the most student loan debt. In an upcoming study, Ramsey Solutions will release more information about the impact of student loans.

Statistics also revealed that people in debt envy their friends who don’t have debt. Almost one in four (24%) who have debt said the thing they envy the most about friends and family is a debt-free life—beating out automobiles, clothes and homes as sources of envy.

“It’s interesting that people are envious of those who are debt-free, and yet that envy is the same thing that keeps people in debt. But comparison is a trap that steals our joy and our paychecks,“ said Cruze. “These numbers prove that while our friends’ lives may seem glamorous on the outside, what we don’t see are the monthly payments that come along with it.“

Debt Weighs on the Emotions of Americans

Nearly half (46%) of Americans say their debt level creates stress and makes them anxious. Among the generations, 64% of Millennials reported the most stress and anxiety, followed by 52% of Gen Xers and 27% of Baby Boomers.

The top two financial fears across all generations were:

Even those who were debt-free ranked these as their top two worries. However, income did affect the ranking among participants. Those with a household income of under $50,000 indicated their second biggest financial fear was not being able to pay monthly bills. An unexpected big expense still topped their list of worries.

Debt also influences how often people worry about their finances. Fifty-three percent of those who admit their finances are struggling or in crisis also say they worry about finances every day. The research also indicates that the higher the amount of debt, the more anxiety people experience. 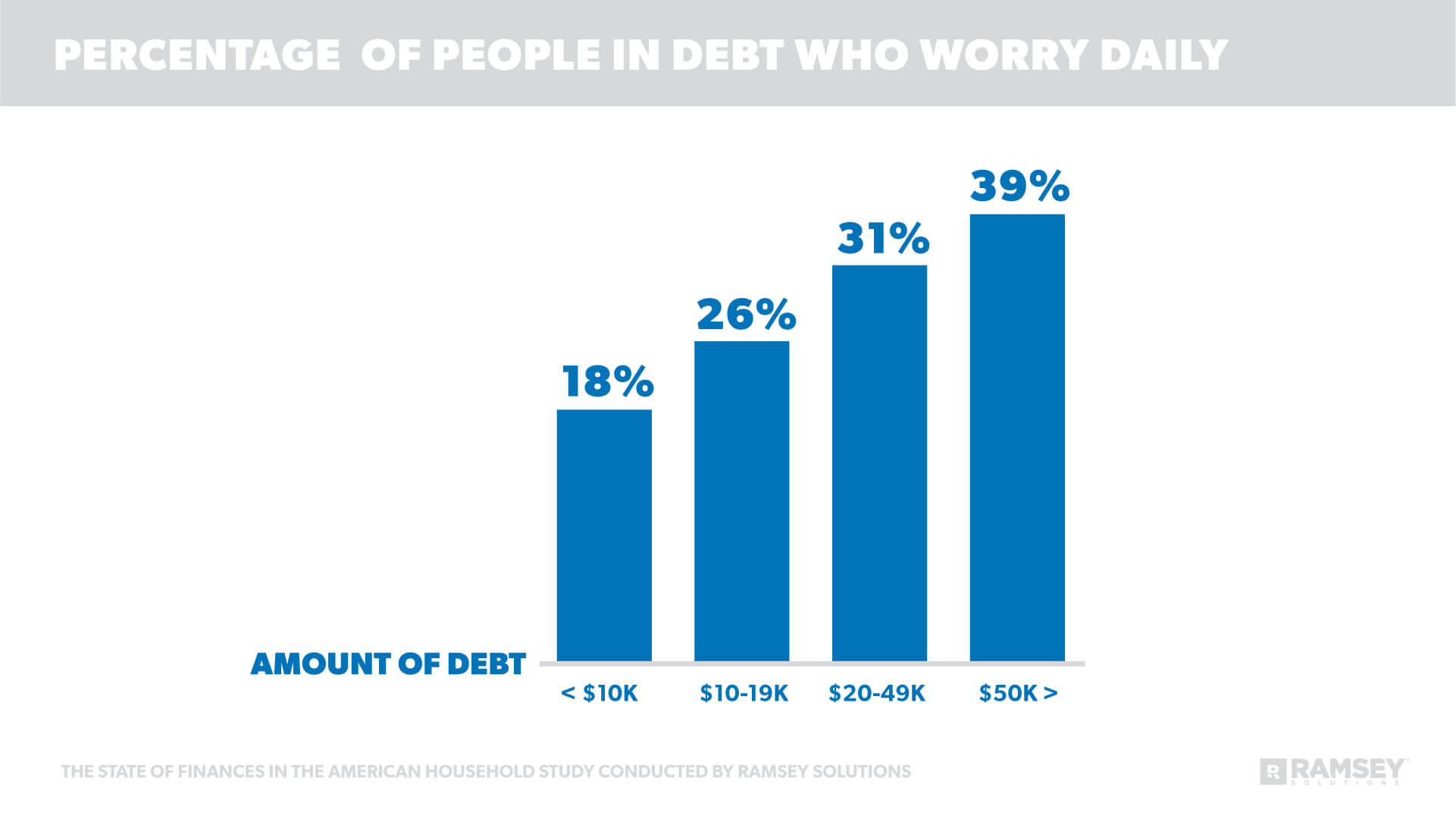 “Money is emotional, whether you’re living paycheck to paycheck or you’re debt- free. But it’s clear that being in debt adds more stress and anxiety,“ said Cruze.

“When you’re in debt, you’re still making payments on the past instead of using that money to tackle your financial fears, like building a safety net and saving.“

There Is Hope for the Future

One-third (33%) who are debt-free never worry about their finances, compared to only 11% who have debt. This indicates a possible solution for those who indicated experiencing anxiety and stress surrounding money.

“It’s possible to finally start living life on your own terms, with your own money and without the stress and worry that come with debt,“ said Cruze.

“All it takes is a plan. Using the debt snowball, we’ve seen people wipe out their debt in an average of 18 to 24 months. It works for them, and I know it can work for you.“

The State of Debt Among Americans Study is a research study conducted with 1,072 U.S. adults to gain an understanding of personal finance behaviors and attitudes, and how money and personal finances impact relationships. Attitudinal- based statistics include only those with an opinion on the topic. The nationally representative sample was fielded November 29, 2017, to December 5, 2017, using a third-party research panel.

Debt-free, as defined in this study, does not include mortgage debt.