There’s a fun saying that Oklahoma City, Oklahoma, is “the biggest small town you’ll ever see.” If you’re thinking about moving there, you’re in good company! Thousands of people have moved to Oklahoma City in the past decade, whether for good job opportunities, great schools or the small-town feel coupled with city-life attractions.

And all signs point to even more growth. Oklahoma City was recently named the #2 best city for first-time home buyers in the U.S.(1) It’s also ranked as one of the top 10 cities to raise a family.(2) No wonder it’s becoming more and more popular!

So how do you know if Oklahoma City is the right fit for you?

We talked to one of our real estate ELPs in that area, Breann L., to find out what makes Oklahoma City so special. Breann was born and raised in Oklahoma City and she’s been a full-time real estate agent there since getting her license in 2006. She’s helped hundreds of people find their dream homes and she’s an expert when it comes to all things Oklahoma City.

True to its Midwest reputation, Oklahoma City is the best of both worlds —it has a small-town community vibe with all the perks of city life.

“I just love the feel of Oklahoma City,“ Breann says. “We have an amazing city, and it’s a lot bigger than most people realize.” But she says it’s more than just a growing city. “It still has a very Southern, close-knit feel. People are so kind and welcoming. There’s also so much to do!”

“I just love the feel of Oklahoma City. We have an amazing city, and it’s a lot bigger than most people realize. It still has a very Southern, close-knit feel. People are so kind and welcoming. There’s also so much to do!” —Breann, L.

If you’re looking for recreation, look no further. Oklahoma City offers local restaurants, entertainment options, museums and plenty of gardens and parks to enjoy. The growing economy has also brought lots of job opportunities—especially for people in energy, aviation, healthcare or industrial fields.

Another big perk to life in Oklahoma City is how easy it is to get around. The average travel time into work is about 20 minutes, which beats the national average commute time by about five minutes.(3) That’s less time on the road and more time in your day!

“You can live in the country and still be 20 minutes to downtown,” Breann says. “Or you can live right in the downtown area and be within walking distance to all of your favorite restaurants and parks. You’re not going to get bored living here.”

“You can live in the country and still be 20 minutes to downtown. Or you can live right in the downtown area and be within walking distance to all of your favorite restaurants and parks. You’re not going to get bored living here.” —Breann L.

What to Do in Oklahoma City

First, you’ll want to eat a good meal. Lucky for you, Oklahoma City has become well known for its restaurant scene, which boasts lots of locally owned spots and a few chains. Grab a burger after work at Nic’s Grill or try the highly rated Kitchen No. 324 for your next Saturday brunch.

Looking for a cool arts scene? Check! Visit the Oklahoma City Museum of Art to view its collection and short-term exhibits. Or stop by the National Cowboy & Western Heritage Museum, which holds more than 28,000 art pieces and artifacts.

Cost of Living in Oklahoma City

Those who want more bang for their buck will be glad to know Oklahoma City has a cost of living score of 91.5, compared to the national average of 100. What does that mean for you if you’re considering a move? Basically, you can expect your dollar to go a lot further than it would in most U.S. cities.

What makes Oklahoma City so affordable? The short answer is housing. According to 2018 data from Kiplinger, Oklahoma City has one of the most affordable median home prices compared to other U.S. cities.(5)

Be sure to think about the cost of moving to Oklahoma City too. After all, spending some of your budget on a moving and storage service like PODS may not be a bad idea. PODS will deliver one of their containers to your driveway, let you fill it up on your own schedule, and then send it to your new address. Simple, right? And so much better than hiring expensive (and chaotic) movers. You can get a quote from PODS here.

Great news, job seekers! Oklahoma City is one of the top 25 metro areas with the fastest-growing job markets, according to a study conducted in 2017.(7) That’s really good news if you’re thinking about moving there!

Local industries include everything from oil and natural gas to aviation, and Oklahoma City is home to the largest livestock market in the world. The city is also a hub for healthcare, energy and retail companies.(8)

Some of the largest employers in the area include companies like Hobby Lobby, AT&T and Devon Energy. There are a lot of opportunities in energy, aviation, healthcare, oil and natural gas.(9)

When it comes to raising a family in Oklahoma City, it’s good to know you’ll have a lot of school options. There are more than 120 primary and secondary schools and many of those have high ratings, according to GreatSchools.(13) Some of the best school districts in the area are Oakdale, Tuttle, Robin Hill, Bethany, Edmond, Deer Creek and Piedmont.(14)

However, you should be prepared to hear the occasional tornado siren. Oklahoma City is known for its location in Tornado Alley, so watch out for severe weather—especially in April and May.

Breann has watched the way the city has transformed and grown during the past several decades. In her opinion, one of the best things about buying a house in Oklahoma City is you know you’re making a good investment.

“The market tends to be pretty stable,” she says. Home values typically increase over time, which makes it a great place to buy if you plan on living there for at least a few years.

Breann says the city’s growth really took off in 2004 when the downtown revitalization process started. Since then, she’s seen more and more young professionals and families move to the city.

That trend has led to an increase in new construction builds in the city, which is great for those who want to customize certain parts of their home. “Within 10 minutes of downtown, you can find just about any type of new house that you want,” Breann says.

There are several areas that offer different perks depending on what you’re looking for.

The downtown area is very walkable, so it’s a great place to live if you want to be close to restaurants and shops. The Myriad Botanical Gardens recently renovated its distinctive Crystal Bridge Conservatory, and there are plans for a much larger part to be completed in 2021.

North of downtown, there’s a historic district that attracts a lot of young home buyers. This area tends to be a little pricey because you’re paying for the convenience of being so close to the action of the city. 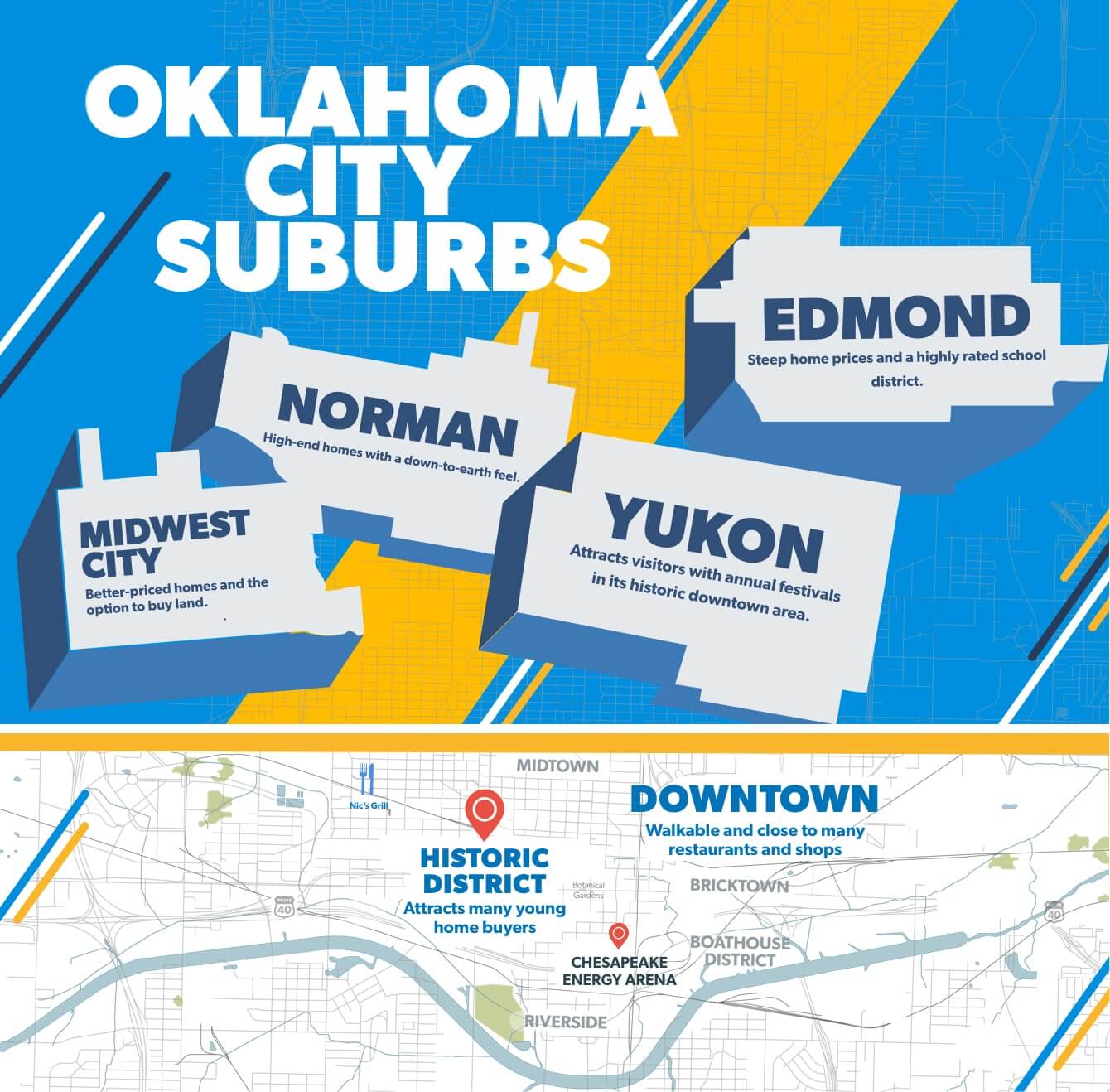 So how about the suburbs? Those areas have become even more attractive to potential home buyers as Oklahoma City has grown. Edmond is a suburb north of Oklahoma City with a steep price point and a highly rated school district. Norman is on the south side, close to the University of Oklahoma. It offers high-end homes with a down-to-earth feel.

On the east side, you’ve got Midwest City. This area is great for people who want to live in the country and own land. On the west side, there are cities like Yukon—which attracts visitors with annual festivals in its historic downtown area.

Having trouble choosing? There are so many great areas in Oklahoma City that Breann says it’s easy for house hunters to feel lost and overwhelmed. That’s where an agent’s expertise can be a huge help in the home-buying process.

“When you work with an agent, they’ll point you in the right direction,” she says. “An agent will make recommendations based on your lifestyle, and that makes it so much less stressful.”

“When you work with an agent, they’ll point you in the right direction. An agent will make recommendations based on your lifestyle, and that makes it so much less stressful.”  —Breann L.

Buying or selling a home is a big deal, and you want to team with someone who knows what they’re doing. This is not the time to work with your aunt who just got her real estate license or your buddy from church who has sold a few homes. You want a true expert who sells dozens of homes every year and has tons of experience in your market.

Looking for an expert? Connect with a pro in our Endorsed Local Provider (ELP) program. We only recommend like-minded real estate agents you can trust. They’re ELP pros who know Dave’s principles inside and out and they’re committed to helping you find a home you love. We designed the ELP program with you in mind, and our agents care more about you than their commission.

Connect with an ELP now!