Los Angeles-area teacher Laura Schlottman was smart. She went to a community college and on to a state school for her undergraduate degree. Her big mistake, however, came during grad school.

“I was debt-free after college, but then I went for my master’s degree at my dream school—the University of Southern California,” she says. “Had I heard about Dave Ramsey, I would have definitely gone to [a state school] and cut my student loans by more than a third. It would have completely changed my current financial situation.”

After so much debt, Laura was curious. Did her dream school influence her marketability? Her employer said no. She was hired based on her skills and accomplishments alone, not her alma mater.

As the Dean of Academics at Magnolia Science Academy 2 in San Fernando Valley, Laura now uses her grad-school story to encourage her high schoolers to choose the college they can afford, not the college that sounds coolest.

“It didn’t make me more marketable—that’s what I tell the kids,” she says. “If you’re a person who has drive, the school you graduate from isn’t going to make much of a difference.”

Teach your children wise money habits early so you change their lives forever.

As fate would have it, the former math teacher was approached to teach personal finance for the 2013–2014 school year. The only problem was that no one had ever taught Laura how to handle her money, much less how to teach kids to budget, save and invest for the future! 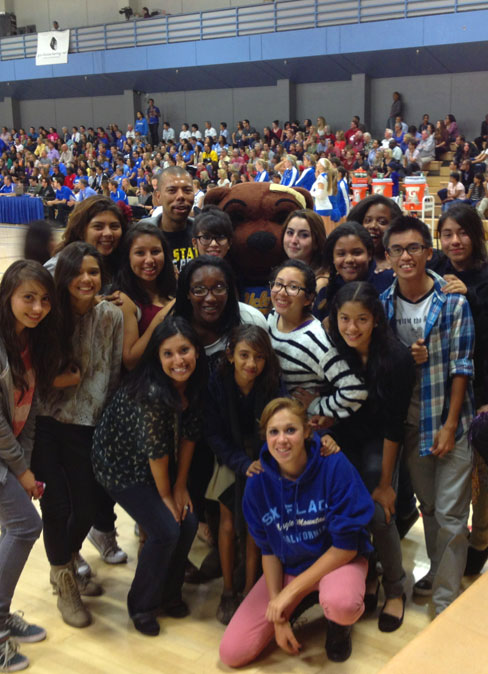 So, like any great teacher (pictured at left with students and fellow faculty), she did her research. Before long, she ran across a sample chapter of Dave Ramsey’s high school curriculum Foundations in Personal Finance and tried it out during the last week of school. The feedback was so impressive that the material became an integral part of her personal finance class the following year.

“They love Dave Ramsey’s humor,” she says of the overwhelmingly positive student response. “The curriculum is very hands-on, and it tells the teacher exactly what to do. [Foundations] is very easy for the teacher, but for the kids, it’s like a show every day.”

While they’re definitely having fun with the curriculum, Laura’s students are also taking the lessons seriously. They want to do things differently than their parents did, she says.

The parents are getting involved too. Last year, one student’s parents requested to meet with their child’s math teacher. Laura gladly obliged, but she didn’t know what to expect. When the family arrived, they pulled out several credit card applications and asked for financial advice!

Laura always refers her guidance back to Foundations: “I tell them I’m not rich yet, so take advice from someone who is. Dave Ramsey doesn’t have credit cards, so you shouldn’t either. Stay out of debt!”

The married mother of two has even gone so far as to cut up her credit cards during class, showing the dramatic change Foundations has made on her own family’s financial perspective.

“I’d never been taught anything like this before,” she says. “Every time I watch the videos, I think, Dang, I wish I had learned this earlier! It just could have been so much better.”

“In a couple years we’ll be thinking about retirement savings and investing,” she says. “It seems like a long time off, but I know that a lot of people never get there.”

She knows, with certainty, she will get there. And so will her students.