In March of 2020, America shut down in response to COVID-19, a global pandemic on a scale none of us had ever seen, and most of us had never imagined. The effects are still present in all areas of life, including finances. Thirty-four percent (34%) of Americans don’t believe they’ll recover from the financial setback of the pandemic, with those in debt more likely to doubt ever bouncing back.

Stress, worry, fear—Americans feel a range of emotions when it comes to money. In fact, they report personal finances and money as their number one cause of significant stress. Yet Americans are still forward-thinking, ranking retirement savings as their number one financial goal. And despite the past year, the majority of Americans (79%) are hopeful about their personal finances in the year ahead.

In the last month, Americans ranked personal finances and money as the number one thing causing them significant stress. In fact, 43% of Americans worry about their finances daily, and 34% lose sleep over their personal finances. Nearly half (47%) of Americans are always worried they’ll have an emergency they can’t afford. Millennials are the most concerned here—64% of this age group reports feeling this way.

The global pandemic impacted all areas of life across the country. Money was no different. When asked to compare their current personal finances to this time last year, nearly a quarter (23%) of Americans say they are worse off.

Breaking those down demographically, we see only 19% of males and a higher 27% of females say they are financially worse off this year compared to last. Also, those who are self-employed (29%) are more likely to say their financial situation is worse than those with full-time employment (17%).

Thirty-four percent (34%) of Americans don’t believe they’ll recover from the financial setback of the pandemic. Those in debt are more likely to feel this way. Forty-two percent (42%) of Americans with consumer debt say the pandemic has been a financial setback they don’t believe they can come back from, compared to only 27% of those who are consumer debt-free.

Of those who have received a stimulus check in the last year, 41% used it to pay for necessities like food and bills, while 38% saved the money. Those without consumer debt (45%) were more likely to save the stimulus money than those with debt (31%). On the other side, those with debt (47%) were more likely to spend the money on necessities than those who are debt-free (34%). 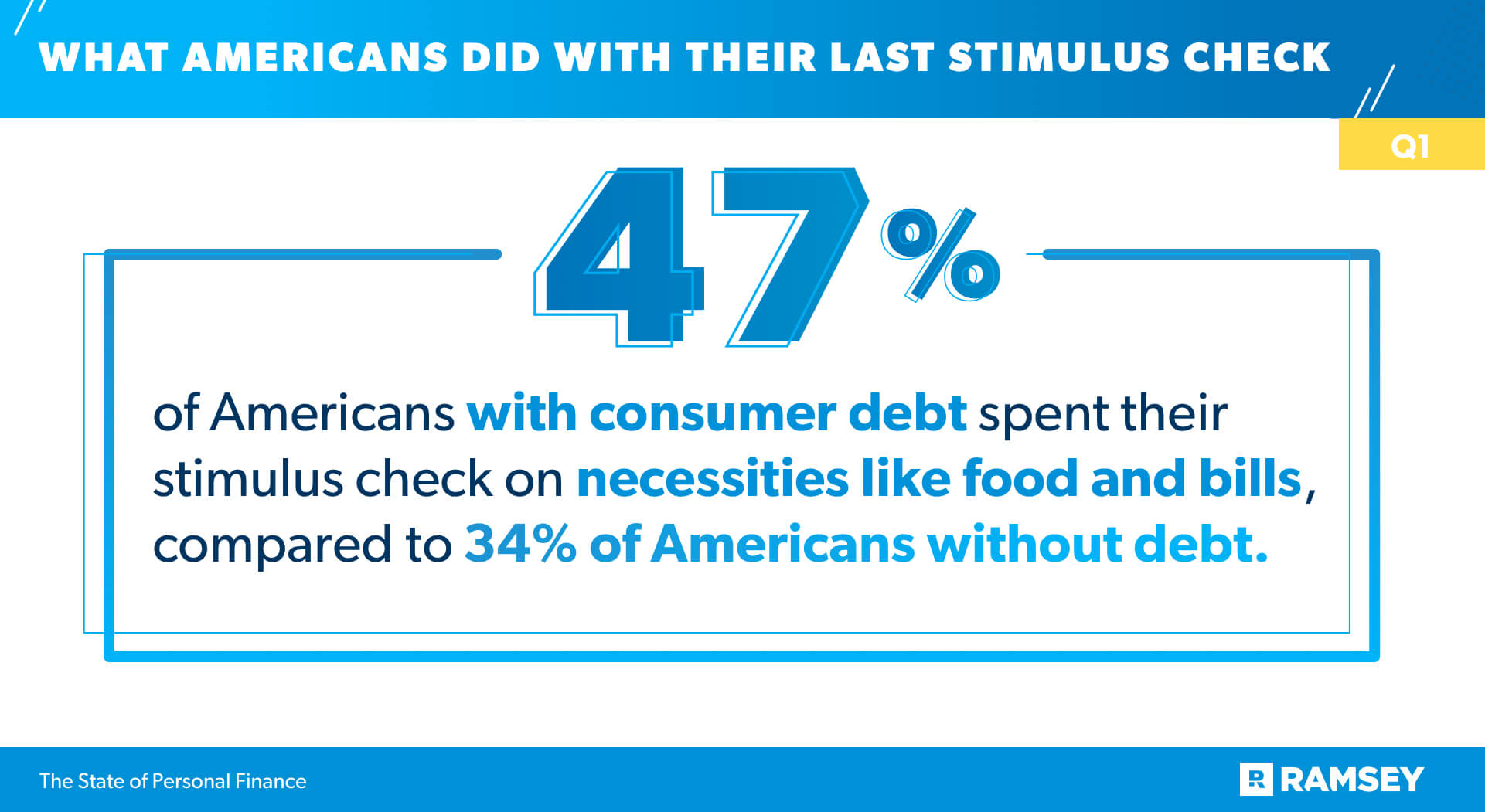 Eight in 10 Americans have a credit card. Most of those have one to two cards, and half use one regularly. Among those using credit cards, four in 10 carry a balance and are racking up interest.

What’s the main motivation for using this type of debt? One in four say they use credit cards to cover expenses they can’t cover with cash. Yet despite their aim at a sense of security, one in five Americans with a credit card have maxed out a card in the last month.

The Federal Reserve reports that 77% of American households have at least some type of debt.1 Our research shows one in four Americans with debt are in collections for at least one of their debts. The generation most affected by both of these money problems? Millennials. Forty percent (40%) of millennials who have a credit card have maxed one out in the last month, and half of millennials with debt have at least one in collections.

The Emotional Effects of Debt on Americans 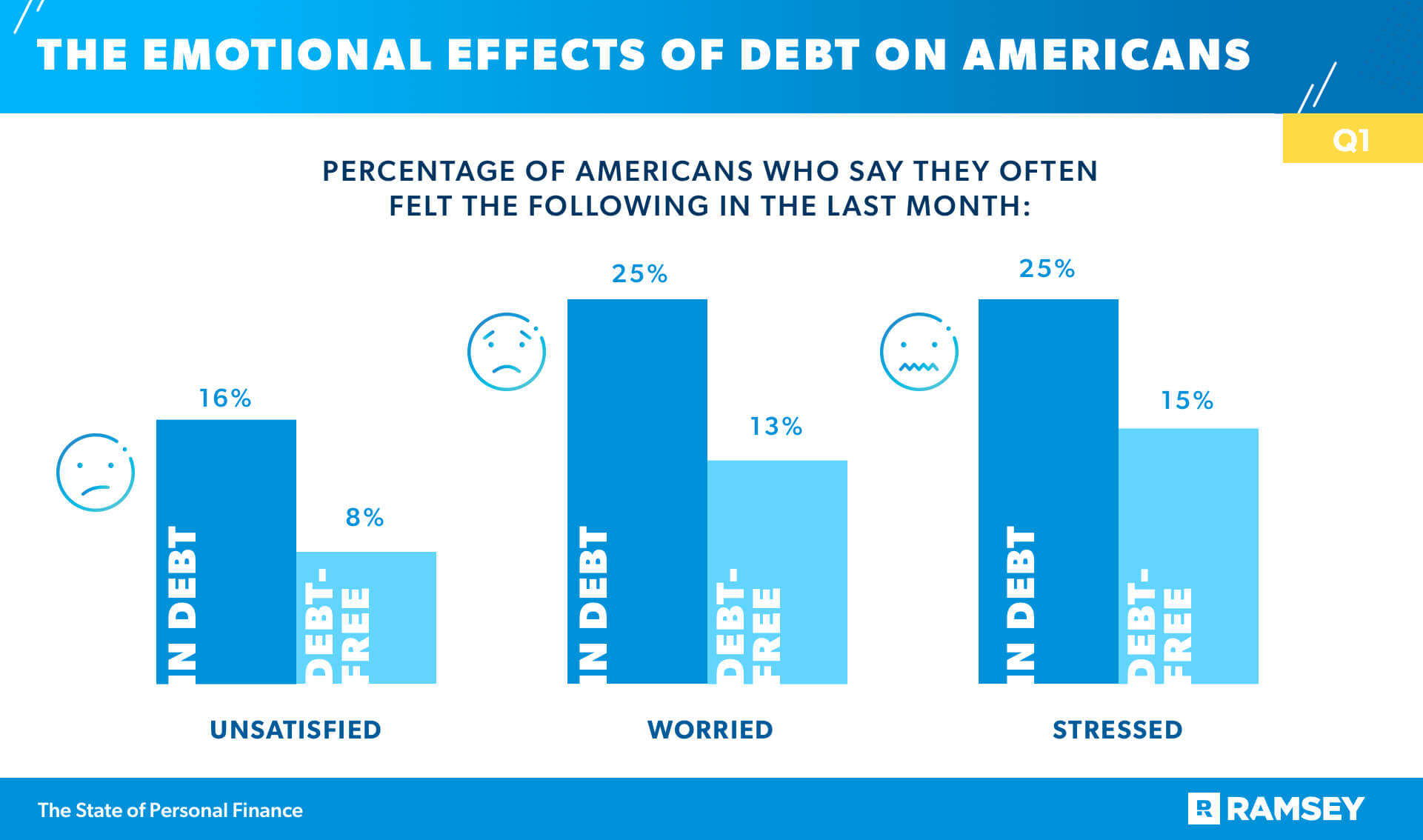 Those we surveyed feel ill-informed on alternative options to covering college costs. In fact, 71% of those who took out student loans to pay for school say they wish they’d been better educated about debt before taking it on.

After a year of intense financial stress and uncertainty, six in 10 Americans still don’t create a monthly budget to manage their finances. However, of the 40% who are budgeting, more than one-third just started budgeting in the last year. Why do Americans begin budgeting in general? Many reasons, including wanting to increase savings and wealth (26%), wanting to get their spending under control (21%), and wanting to pay off debt (17%).

As a result of COVID, 22% of Americans cut out expenses to save money, 14% started saving for emergencies, and 13% delayed a major expense they’d planned. 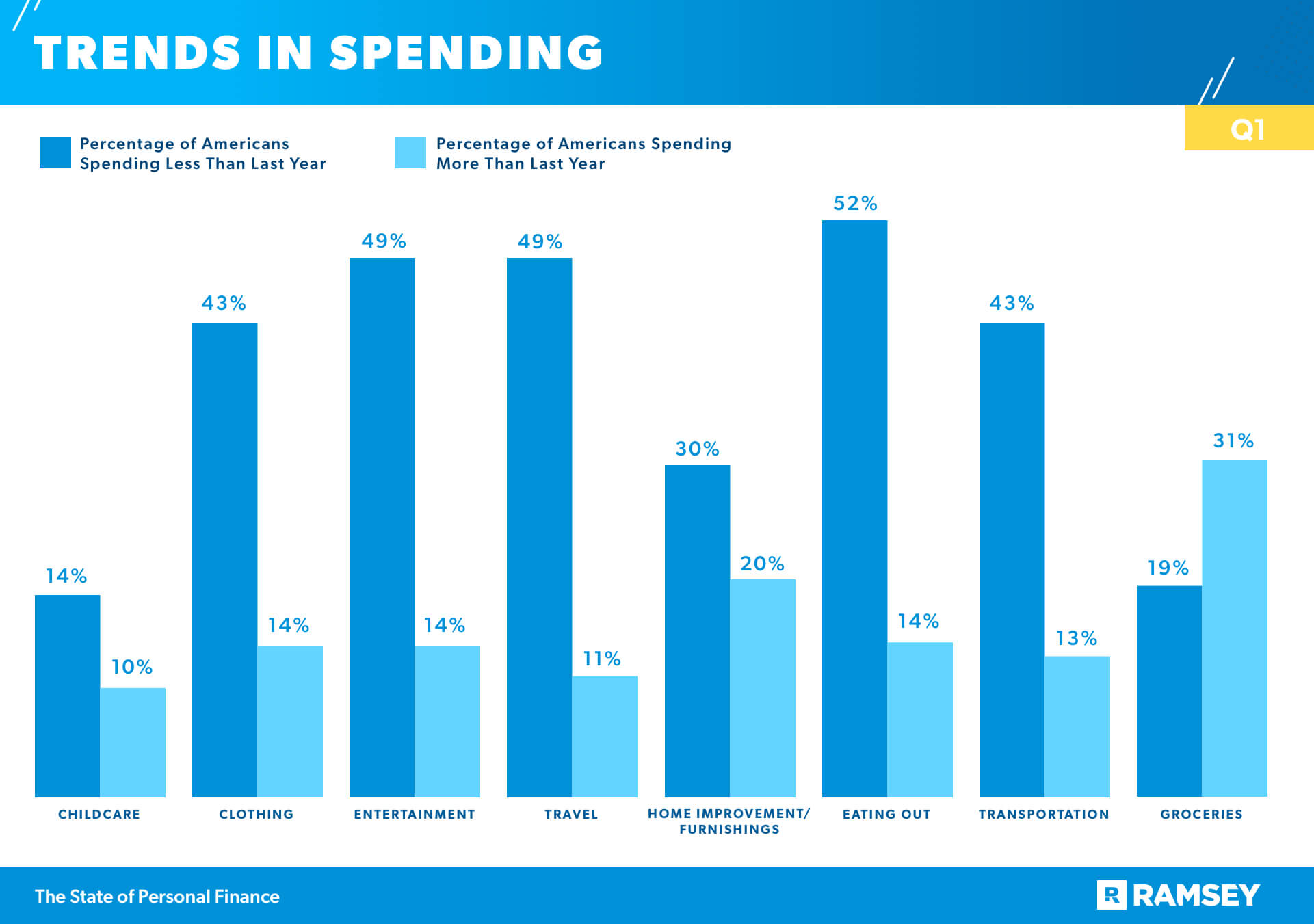 The top two financial goals Americans have are related to short-term and long-term savings, with retirement ranking as number one.

#2 Save More Money in the Bank

Another notable discrepancy in retirement savings is across gender: 63% of males and 50% of females are saving for retirement.

Personal Finances and Hope for the Future

Seven in 10 Americans say the ability to win with money is within their control—that it is more dependent on their personal habits rather than their external circumstances. And nearly eight out of 10 Americans (79%) are hopeful about their personal finances in the year ahead. This indicates most Americans have hope in their financial future and believe their habits and actions will be what brings the results they need with money.

The State of Personal Finance Study is a quarterly research study conducted by Ramsey Solutions with 1,023 U.S. adults to gain an understanding of the personal finance behaviors and attitudes of Americans. The nationally representative sample was fielded March 25, 2021, to March 30, 2021, using a third-party research panel.