You signed up for a timeshare. The pitch made it seem like the deal of a lifetime. But now you’re feeling trapped. You’re realizing that lump payment plus the growing annual maintenance fees plus the cost of traveling to your little slice of paradise isn’t really very paradise-like after all. What now?

Well, if you’re wondering how to get rid of a timeshare, know this: It can be tricky, but it isn’t impossible. Check out these five great options (and three to avoid).

1. Use the Recission Period

Each state decides how long its recission period is. It ranges from three days (the Federal Trade Commission’s minimum requirement) in states like Kansas and Ohio to 15 days in Alaska.1 Yep, they’ve got the northern lights and the longest recission period!

Recission laws are based on where your timeshare is located—not where you live—so make sure you look up the laws in the correct state. And if you bought a timeshare outside the U.S., you’ll need to research that country’s laws.

The recission period may start on the day you buy the timeshare—but it may be based on other factors, like when you receive the public offering statement. (That’s a list of general information about the timeshare, also called a “timeshare disclosure” or a “disclosure statement.”)

And of course, find out when that recission period ends too. Some states disqualify you if you have the public offering statement for too long before you purchase the timeshare. Other states are willing to give you extra time if you meet certain requirements.

If you’re still in the recission period, great! Now all you need to do is cancel that pesky timeshare purchase.

To do this, you’ll need to write a timeshare cancellation letter that tells the resort it’s over and mail it to their cancellation address. But since these resorts are sneaky and underhanded, a lot of them hide that address in tiny fine print or leave it out altogether. (They’ll do anything to avoid cancellations that cost them money.)

If you can’t find the address, ask the resort for it. Don’t take no for an answer—you’re legally entitled to this information! Some states actually won’t start your recission period until you receive the cancellation address and instructions. Make sure you know all the nitty-gritty deadline details.

When you mail the letter, use a service like USPS certified mail. Then the resort has to sign for it and prove they actually got it. (Otherwise, they might pretend they never got notice. So. Shady.) Keep extra copies handy too so you can send as many as it takes!

One more thing: Some resorts try to charge “cancellation penalties” and other fees. But there are actually laws about whether sellers can do this. They usually can’t, so watch them like a hawk staring down its lunch. Not only are they breaking the law—they’re trying to rob you. Don’t let them!

2. Ask the Resort to Take It Back

If you missed the recission period, there are still ways to get out of your timeshare. Some are surprisingly simple, like a timeshare deed-back. This is a legal, low-cost way to give the property back to the resort.

Look through your timeshare’s paperwork to see if this is an option for you.

Just be careful! Sometimes when you call, the resort sees it as an opportunity to upgrade your timeshare. You do not want to walk away with an additional contract chaining you down. You’re trying to break free!

Okay, so you missed the recission period and the resort won’t take back your timeshare. Now what?

Sell it to someone else!

The first step is seeing if you can sell your timeshare. If you still have a loan on it, your timeshare will be listed as “encumbered.” Unfortunately, there’s really no going forward with a sale until the loan’s paid off.

If your timeshare is eligible to sell, find out what it’s worth. Check with a real estate agent or look online for timeshare resale sites or general listing sites like eBay and Craigslist. Try to find the final sale prices for timeshares similar to yours (not just the amount they’re listed for).

Unless it’s in a hot location (think Disney World), your timeshare may not be worth a lot. That’s okay! In that case, your goal isn’t to recoup expenses you’ve already paid—it’s to avoid future costs. This thing is going to drain your money for years if you stick with it. Right now, the average timeshare maintenance fee is $1,120 a year, but that number grows annually.2 It went up 2% from 2017 to 2018 and then 12% from 2018 to 2021.3,4

And all this is for a piece of property you don’t actually own. It isn’t your pie. You just get a slice . . . that goes down in value yet gets more expensive as time goes on.  Cut your losses and get out now!

You can list your timeshare for sale online—but choose a website with no up-front fees so you don’t get hoodwinked by companies charging an arm and a leg to post on their “exclusive” website.

You can also talk to whoever has the same timeshare property the week before or after yours. They may want to purchase your contract so they can extend their vacation options.

If you don’t know them personally, you may be able to get an owners’ directory from the resort. Or contact the county courthouse where the timeshare is located and request a copy of the deed. No need to feel creepy—it’s a public record.

Like we said earlier, getting out of your timeshare isn’t easy. You might want to call in a professional to help—especially if you’ve taken timeshare “upgrade” offers (even if all you did was change your vacation week). Those upgrades are normally considered new contracts, which means you’ve got more than one contract you need to get out of to be 100% free from your timeshare.

That’s a lot to do on your own, so you may need an attorney to help you work your way out of it all.

Find one who specializes in contract law and has successfully gotten people out of their timeshares. You don’t want someone who will bumble their way through this.

5. Use a Timeshare Exit Company

Another option is to use a timeshare exit company. If you go this route, make sure you find a company that:

There are just as many shady timeshare exit teams as there are timeshare sales companies—so be careful! You don’t want to trade one set of problems for another.

Costs to Get Out of a Timeshare

As you can tell, you’re looking at some costs along the journey to get rid of your timeshare. Here are a few of the things you might have to budget for or be thinking about with your finances:

You’ve probably gotten plenty of advice on how to get rid of a timeshare—but be careful. Don’t complicate your situation with any of these options. Some are risky, and some are downright dishonest.

1. Don’t Rent Out Your Timeshare

Okay, one of the top pieces of advice you might get is to rent out your timeshare. The logic is that at least you’ll get some money for your trouble. But here’s why we’re against the idea.

First, most resorts don’t allow it. So that option literally isn’t on the table for you.

Second, it only takes one bad renter to trash the place and leave you with repair bills that cost you more money than you made from renting—and get you in trouble with the resort.

Also, when will those repairs get done? The other people who have slices of that timeshare pie still have their weeks on the calendar. It’ll cost extra to find a repair service who can swoop in before the next owner’s turn.

2. Don’t Give Away Your Timeshare

Another piece of well-intentioned bad advice is to give your timeshare to a relative or charity. What’s the problem with that? Isn’t giving always the best?

Well, this “gift” comes with strings attached—so many strings (aka fees and responsibilities) that you’re tripping over them. And it’ll be no different for the one you gift your timeshare to.

Some charities or family members might say, “Thanks, but no,” because they know this. And if they don’t know, you know—so don’t hand off the property that’s so troubling to you to someone else as a “gift.”

Not only is there a moral side, but there’s also a legal side. You’ve signed a contract. If you don’t pay, the timeshare company will turn your unpaid dues over to collection agencies. Cue the manipulative phone calls at all hours of the day and night!

If you still don’t pay, your timeshare may go into foreclosure, but that’s not guaranteed. Some developers won’t foreclose because they’d rather keep harassing you for payments and ruining your credit. We’re talking months of expensive court battles, legal fees and heartaches—all because you thought ignoring the problem could make it go away. It won’t.

We know you’re sick and tired of paying these vultures, but this is not how you fix the problem you’ve gotten yourself into. Use one of the methods we talked about earlier, and do this the right way. No handoffs. No hiding. No hounding. Just peace of mind and real relief when it’s all said and done.

Is It Worth It to Get Out of a Timeshare?

Timeshares aren’t worth it. But getting rid of a timeshare? Totally worth it. While you’re likely to pay a few thousand dollars now, you’ll recoup your costs and save money in the long run.

Remember those $1,120-a-year maintenance fees? Those aren’t going away (and are actually growing) each year you “own” this thing. Get out!

Right now you might be wishing you’d never fallen for this timeshare scam. The salesperson said you’d have it made in the shade, but you really just got tricked by their shady business.

It happens. But you can avoid the next marketing trick. Check out the new lesson in Financial Peace University (FPU) called Wise Spending where you learn to outsmart their schemes. Then watch all the lessons and learn the best way to handle your money.

Check out FPU, get started with the (correct) way to get rid of your timeshare, and free yourself from the timeshare trap. For good. 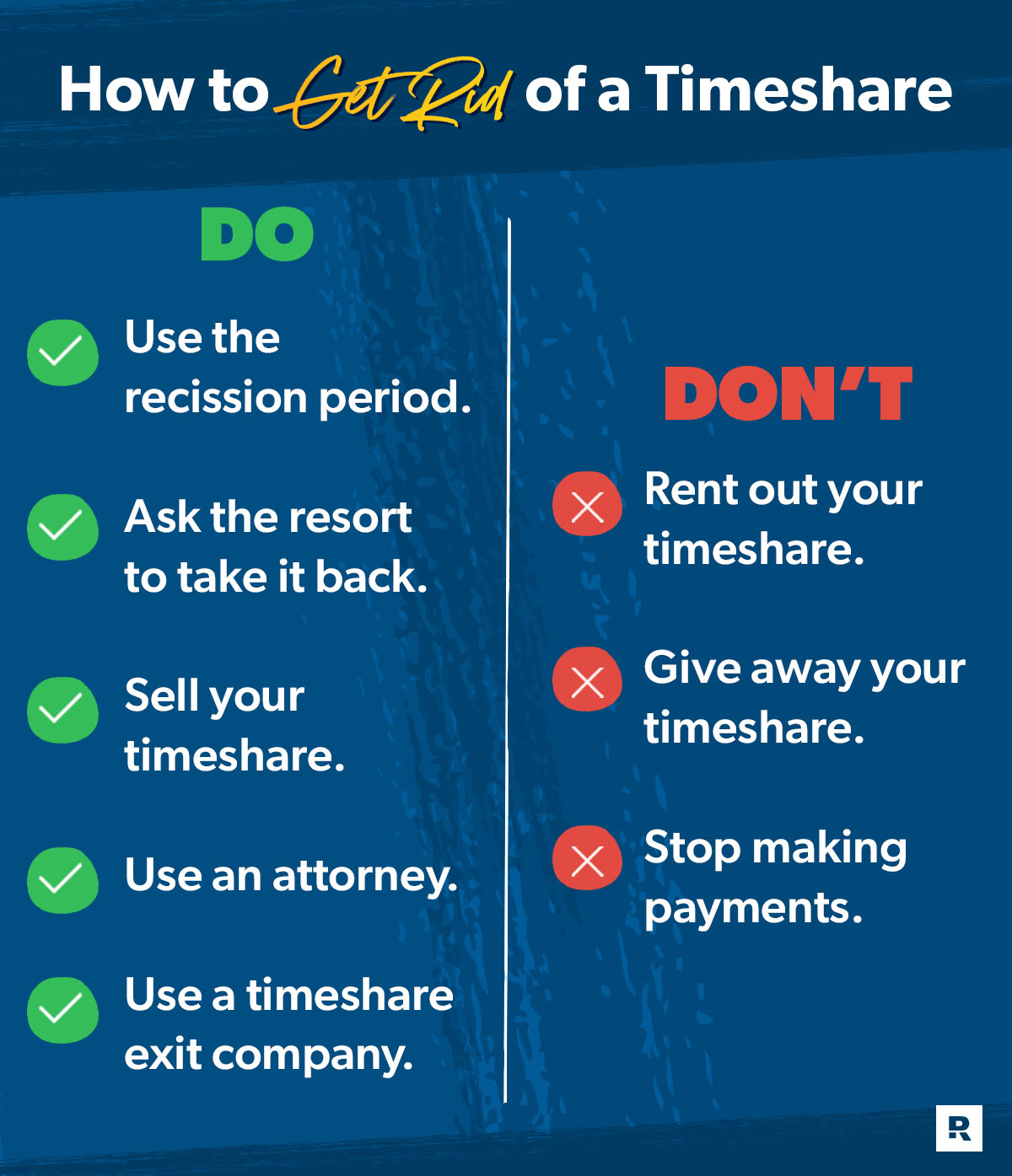 Learn how to outsmart those shady scammers and gain control of your spending.