Thinking about moving down south and settling in Alabama? Exciting stuff!

Alabama has a little bit of everything. Like the hustle and bustle of living in a big city? Birmingham will definitely get the job done. Prefer the countryside? There’s plenty of that too. Beaches? Yep. Are you a sports fan? Alabama is home to the annual SEC Baseball Tournament and, of course, the Crimson Tide. More of an arts person? Alabama has tons of awesome music venues and theaters, like the Oak Mountain Amphitheatre and the BJCC Concert Hall.

Before you pack up and hit the road, though, you’ll want to take a look at the cost of living in Alabama and make sure you can afford it.

What’s the Average Cost of Living in Alabama?

The average cost of living in Alabama is 12.2% lower than the average U.S. city, making it a relatively inexpensive place to live.1

Where did that number come from? We looked at a 2022 cost of living index that compared nine areas of Alabama with hundreds of other cities across the U.S.

Cost of Living in Alabama Compared to Bordering States

To give you a frame of reference, here’s a look at the cost of living in the four states that share a border with Alabama. Unless otherwise stated, all the numbers in this article come from the 2022 Cost of Living Index from The Council for Community and Economic Research.

What City in Alabama Has the Lowest Cost of Living?

Wondering what the cost of living looks like city by city? We’ve got you covered.

Cost of Living in Alabama by Category of Expenses

Finally, here’s a breakdown of the cost of living in Alabama by some common categories of expenses.

Let’s dig a little deeper into each of those categories.

Cost of Housing in Alabama

Housing costs in Alabama have definitely gone up over the last few years (just like everywhere else) but they’re still among the most affordable in the U.S.

In fact, Alabama’s average housing costs are a whopping 30% lower than the rest of the country. That’s good news if you’re looking to move to the Yellowhammer State. (Yeah, Alabama has some interesting nicknames.)

Cost of Buying a Home in Alabama

Here’s what you can expect to pay, on average, for a house in Alabama.

By the way, if you do decide to buy a house in Alabama, you’ll want to get a top-notch real estate agent in your corner to make sure you get the best possible deal on your new home in your new state. That’s where our RamseyTrusted agents come into play.

RamseyTrusted real estate agents are part of our Endorsed Local Providers (ELP) program. They’re rock-star agents with loads of experience serving their local area (and we’ve got plenty of them in Alabama ready to help you out). And trust us—they will earn every last penny of their commission.

Cost of Renting an Apartment in Alabama

Maybe you’re looking to rent instead of buy. (And no, renting doesn’t mean you’re throwing money out the window. Don’t listen to your broke friends.) Here’s how much it will cost you each month, on average, to rent an apartment in Alabama.

Other Costs to Keep in Mind

Housing is only part of the equation when it comes to the cost of living. Here’s a look at some other important types of expenses you’ll want to keep in mind.

Health care is also affordable in Alabama—you’ll pay 9% less than in other states, on average.

Alabama’s median health care costs can be found in the Auburn-Opelika area. Here’s a look at the average cost of some typical medical expenses.

Here comes the fun part: taking a look at how much Uncle Sam will take if you live in Alabama! (Don’t throw any tomatoes, please.)

Alabama has one of the lower state income tax rates in the U.S.—just 2–5%, depending on your tax bracket.2 Sales tax, unfortunately, is a different story. Alabama has a 4% state sales tax rate, and an average local rate of 5.24%. Those numbers add up to make Alabama’s average sales tax 9.24%, which is the fifth highest in the country.3

Don’t forget: When you’re ready to file your first Alabama tax return, we’ve got the people and programs to help you do it stress-free. Check out our trusted tax services.

When you compare the costs of goods and services like those across cities in Alabama, Decatur’s are right in the middle. A few examples: An average haircut costs $14.25, a new shirt costs $34.14, and going to a movie will run you $11.29.

Here’s a look at how those numbers compare with the national averages: 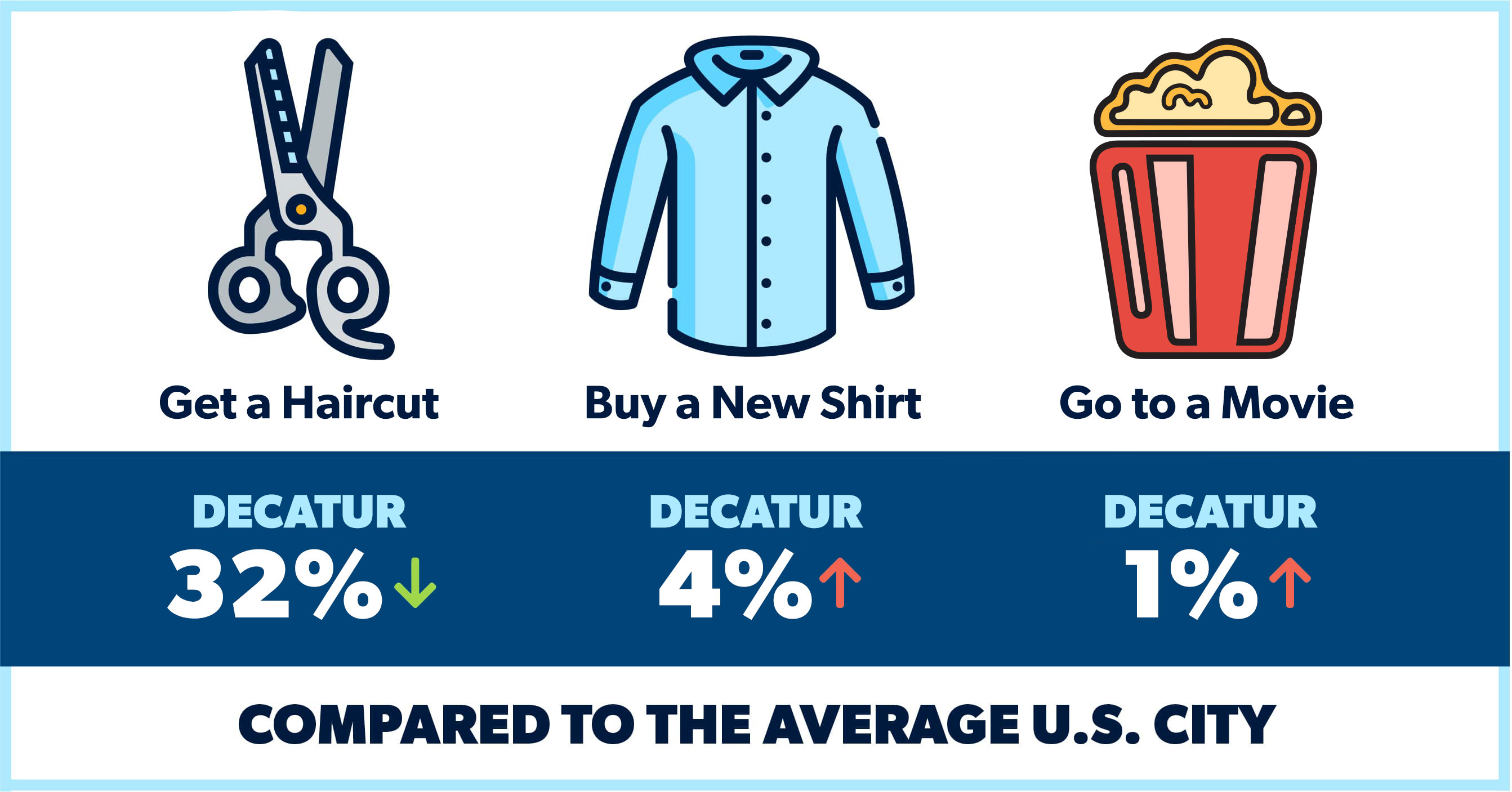 Can You Afford to Live in Alabama?

Alright, pause and take a deep breath. We just hit you with a lot of numbers. (Sorry about that. Hopefully they didn’t hit you too hard.)

Ultimately, though, it’s up to you to decide whether you can afford to live in Alabama. As you make that decision, there are a few things you’ll want to keep in mind.

Most importantly, you’ll want to make sure your monthly housing payment—whether that’s a mortgage or a rent payment—is no more than 25% of your monthly take-home pay. If you’re paying more than that for your house or apartment, you won’t have enough money left over to put toward other important financial goals like saving for emergencies or investing for retirement.

When it comes to other expenses, how much you can afford is really up to you. It all comes down to how much money you make and how much money you spend—two things you get to control. Want to make more money? There are plenty of ways to increase your income, like getting a side hustle or finding a better-paying job in this white-hot market. Want to spend less money? Get on a detailed written budget and figure out some areas where you can cut back.

Ready to Move to Alabama?

If you’ve crunched the numbers and decided Alabama is the place for you, that’s awesome! That also means it’s time to start making plans to move, and there’s no better place to start than PODS.

With PODS, you won’t have to worry about figuring out how to cram all your stuff into the back of your minivan at the last minute. They’ll drop off one of their moving and storage containers at your current address, let you fill it up on your own time, then deliver it to your new home when you give them the thumbs up. Super convenient, huh?

Get a quote from PODS today!

P.S. Want to Know Where We Got Our Data?

Most of these numbers came from the Cost of Living Index (COLI). The Council for Community and Economic Research (C2ER) publishes this data every few months, and we use that info to help keep our Cost of Living Calculator as up-to-date as possible. Learn more about C2ER here.