A new year can mark a new beginning, but for American consumers, the financial worries of 2021 remained top of mind in the first quarter of 2022. The latest quarterly release of The State of Personal Finance examines the different ways inflation has impacted consumers’ budgets and how that impact is playing out in their financial decisions great and small.

The study will also look at the ever-evolving world of the job market, and how the nationwide changes implemented during the COVID-19 pandemic continued to have long-term effects on the career choices people make, as well as where they live.

Inflation is Front-and-Center, Covering Everything

The shadow of rising inflation continued to play a major role in the financial decisions of most American consumers. The sharp increase in prices led to a nearly 10% increase in the number of people who noticed the effects of inflation this quarter over last quarter, with people feeling the most pain at the gas pump and the grocery store. Eight in 10 said inflation had an impact on their day-to-day finances. And one-third reported that inflation made a significant impact on their financial decisions. 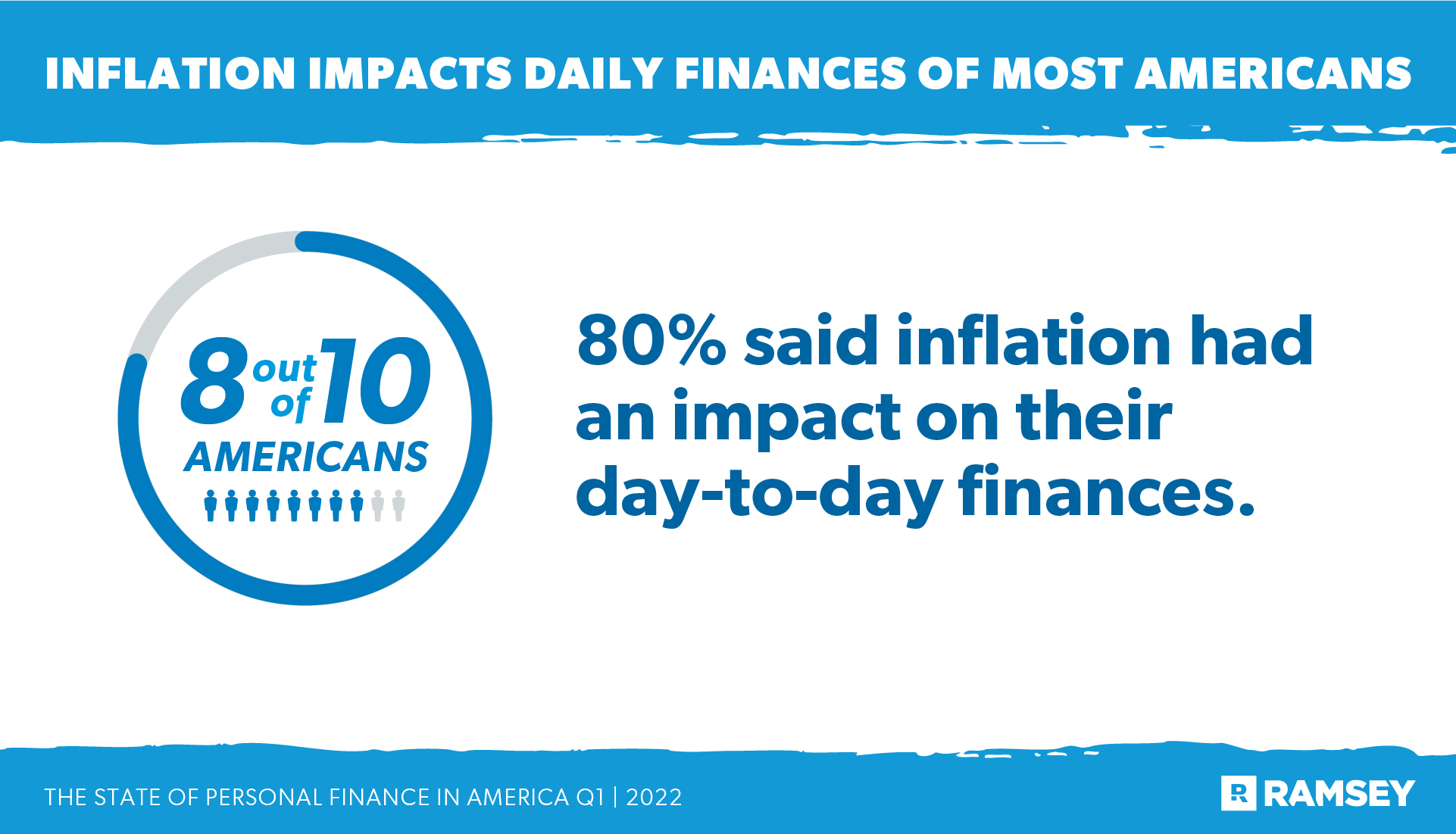 People were also finding ways to supplement their take-home pay to cover the increased costs. Thirteen percent said they got a side hustle or second job on top of their regular full-time job in response to inflation. And one in 10 took on new debt to cover rising costs.

As with most things, debt made the effects of inflation even worse. Those with consumer debt were nearly twice as likely (40%) to say inflation had a significant impact on their day-to-day-finances compared to those who are debt-free (23%). Because of the rising prices caused by inflation, one in four people with debt cut back on the amount they put toward paying off their debt, and one in five relied on credit cards to buy something they would normally pay for with cash. However, one in four have also started budgeting to track their spending.

The stress caused by increased spending due to inflation also led to increased anxiety among consumers. A majority (60%) said they were anxious about how they were going to pay for things because of inflation.

With prices rising on everyday goods and services, consumers looked for ways to lessen the impact on their family’s budgets by really thinking about the ways they spend money. Four out of five Americans said inflation significantly changed the way they shop for groceries, with 39% saying they cut back on non-essential grocery and food items. Nearly one-third said they either delayed or cancelled a future purchase. 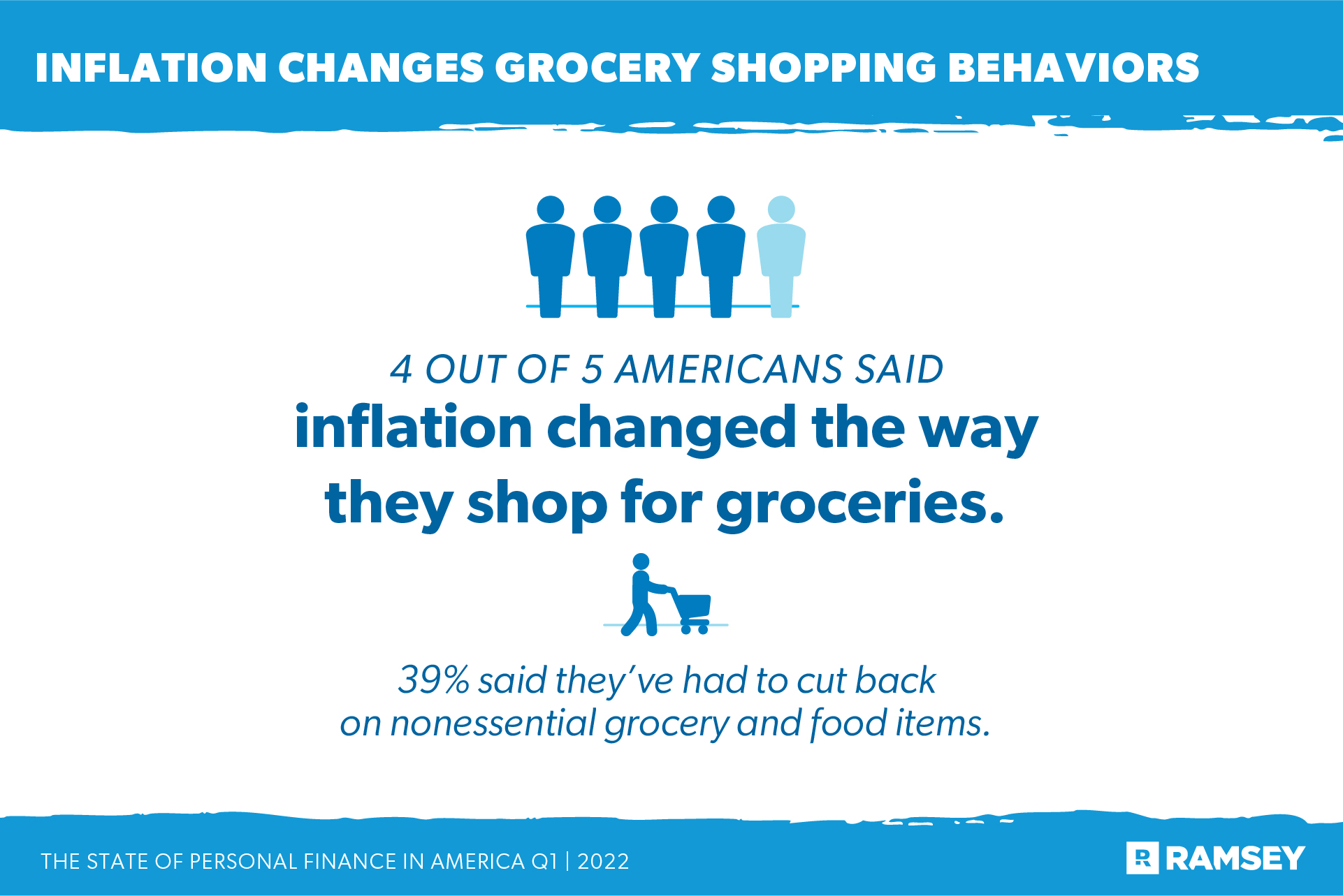 Compared to last year around the same time, people spent more on groceries, utilities, and transportation in Q1 of 2022. On the other end of the spectrum, people spent less on non-essential items like eating out, entertainment, and travel—though the number of people spending less on those items was decidedly fewer. For example, in the top spots on both ends, 57% said they spent more on groceries, but only 33% said they spent less on eating out.

Inflation also impacted summer vacation spending plans. While six in 10 were planning to travel this summer, half are increasing their travel budget or completely changing their travel plans to offset higher prices. Despite the increase in gas prices, 12% more people plan to drive to their destinations rather than fly.

Even though people have changed their spending habits to combat inflation, impulse buying remained common. More than a third of consumers admitted to making at least one impulse purchase in the last three months—the majority of which were food items found while shopping in a store. Nearly one quarter of consumers made impulse purchases on social media, with 30% of Millennials in particular admitting to these types of purchases.

The popularity of buy now, pay later (BNPL) services remained steady despite increased inflation, with the number of people who used them hovering at around 21%. A majority of BNPL users (79%) preferred the service over using a credit card. But a majority (60%) also had trouble managing their payments. Two-thirds admitted they were still paying for an item they bought with a BNPL service even after they no longer owned the item. 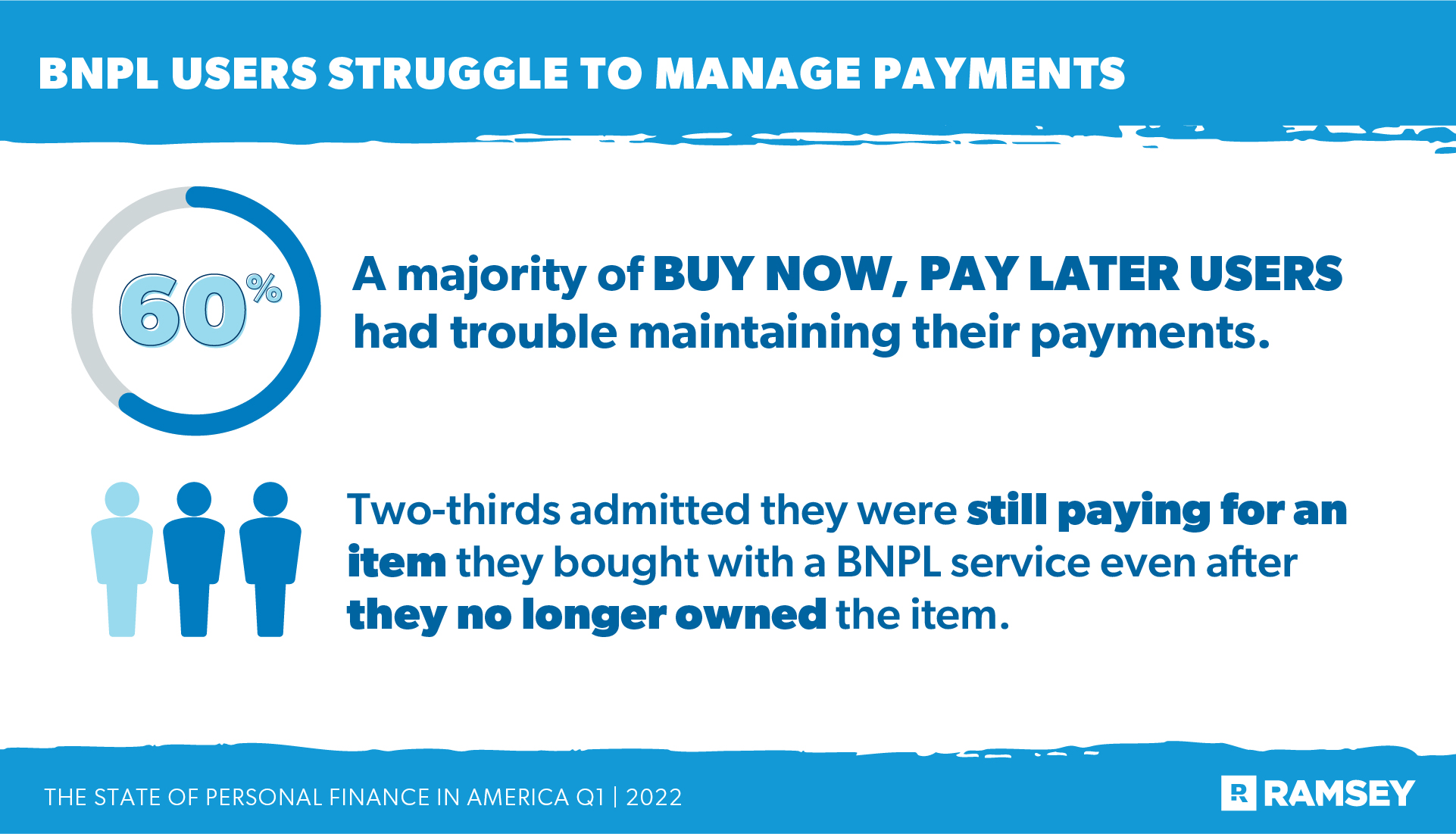 Tax Refunds Come in . . . and Go Out to Savings and Bills

The beginning of the year also brought launch of the 2021 tax season. Of the people who had filed their 2021 taxes at the time of the survey, seven in 10 expected to receive a refund.

In a possible reaction to the uncertain financial times, 47% said they plan to save their refund. And half said they would use their refund to cover bills—either paying everyday expenses or paying down debt.

In this time of financial uncertainty and worries about inflation, people are looking for sources they truly trust for advice on what to do with their money. The most popular sources of financial advice in the first quarter of 2022 were family (33%) and friends (25%). Four in 10 said they don’t have anyone to turn to for financial advice. Younger generations (Gen Z and Millennials) especially lacked trustworthy financial sources, with about half of them saying they had no one to turn to.

Consumers, especially the younger generations, increasingly looked to content on social media for financial advice. One third said they implemented financial advice they found from someone they follow on social media. YouTube had the most influence in all generations. It was as popular as an actual financial advisor—and considered just as trustworthy. Gen Z was the most likely to get money advice from YouTube (43%), followed by Millennials (37%), Gen X (20%), and Baby Boomers (6%).

Cryptocurrency on the Rise Still

Outstanding student loan debt was also a source of financial stress for Americans in Q1. Three-fourths of those who took out student loan debt are still paying on their loans. But, since the start of the COVID-19 pandemic in March of 2020, federal student loan payments have been paused by the federal government. With the pandemic getting further and further in the rear-view mirror, those payments were scheduled to restart in May 2022. Then the government extended the moratorium through August 2022.

The Q1 State of Personal Finance survey was conducted before the government announced the most recent extension of the moratorium. At that time, four in 10 people with student loan debt said they were extremely worried about their loan payments restarting. And three in 10 said they weren’t prepared to start making payments again. Most borrowers (77%) are holding out hope that at least some of their student loan debt will eventually be forgiven. 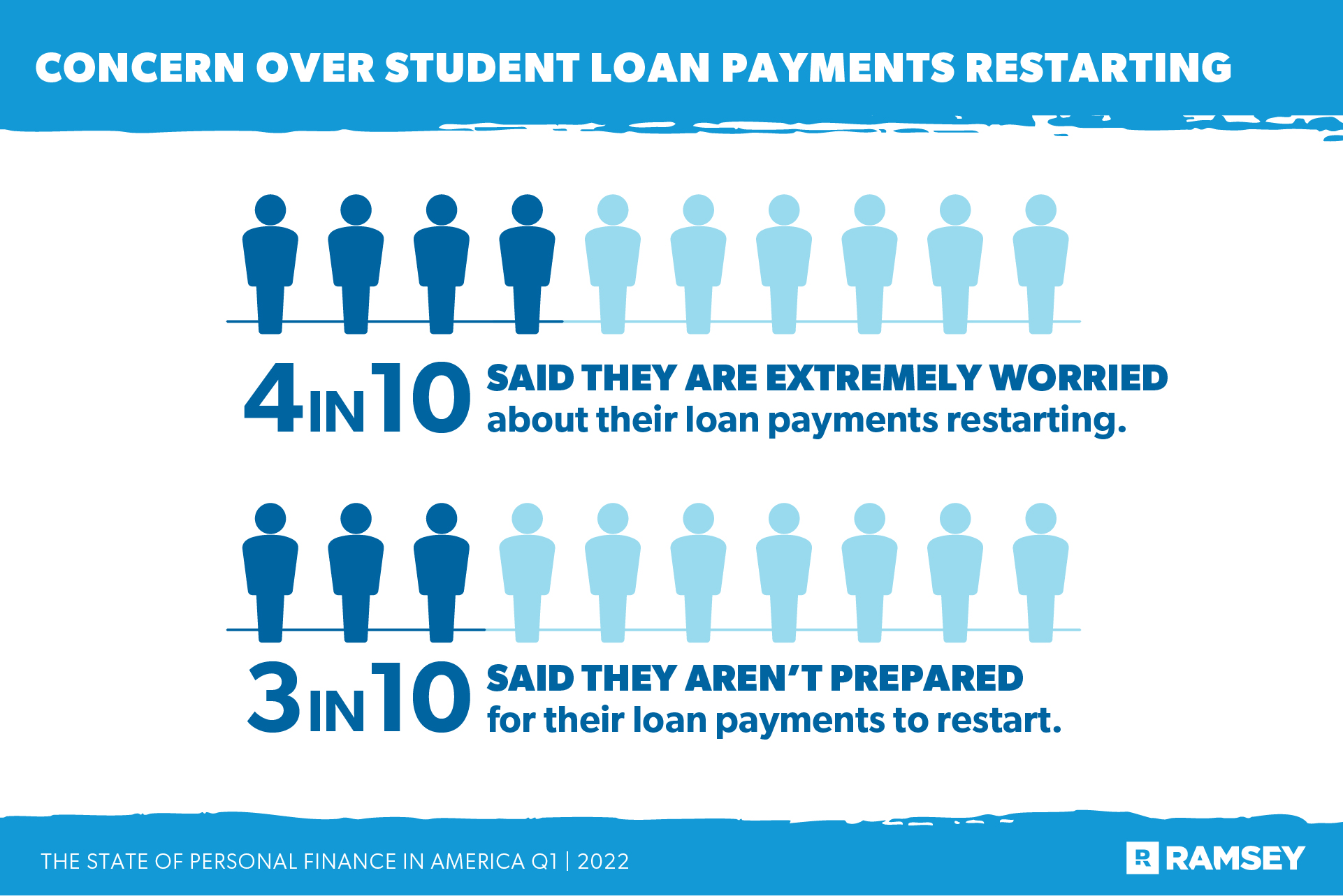 The 2021 Great Resignation brought on in the wake of the COVID-19 pandemic didn’t seem to lose any steam going into 2022. Less than half of Americans (40%) were extremely satisfied with their jobs, and half were considering changing their jobs—a result consistent with the last two times Ramsey Solutions surveyed this question in The State of Work and The State of Financial Wellness studies. There was also very little difference in current levels of satisfaction between those who changed jobs and those who didn’t. Among the generations, Gen Z (65%) and Millennials (60%) were the most likely to consider changing jobs.

Many employees are facing a change in their work situation as companies plan to transition workers back to on-site work. Forty-five percent (45%) of fully remote workers said their employer plans to return employees to an on-site location soon. While a slim majority still listed their primary working environment as fully on-site (52%), those who have been working from home had grown accustomed to the freedom it brought them, and most would like to see that way of working continue. In fact, four in 10 fully remote workers said they would be extremely likely to quit their current job if it transitioned to a fully on-site role. 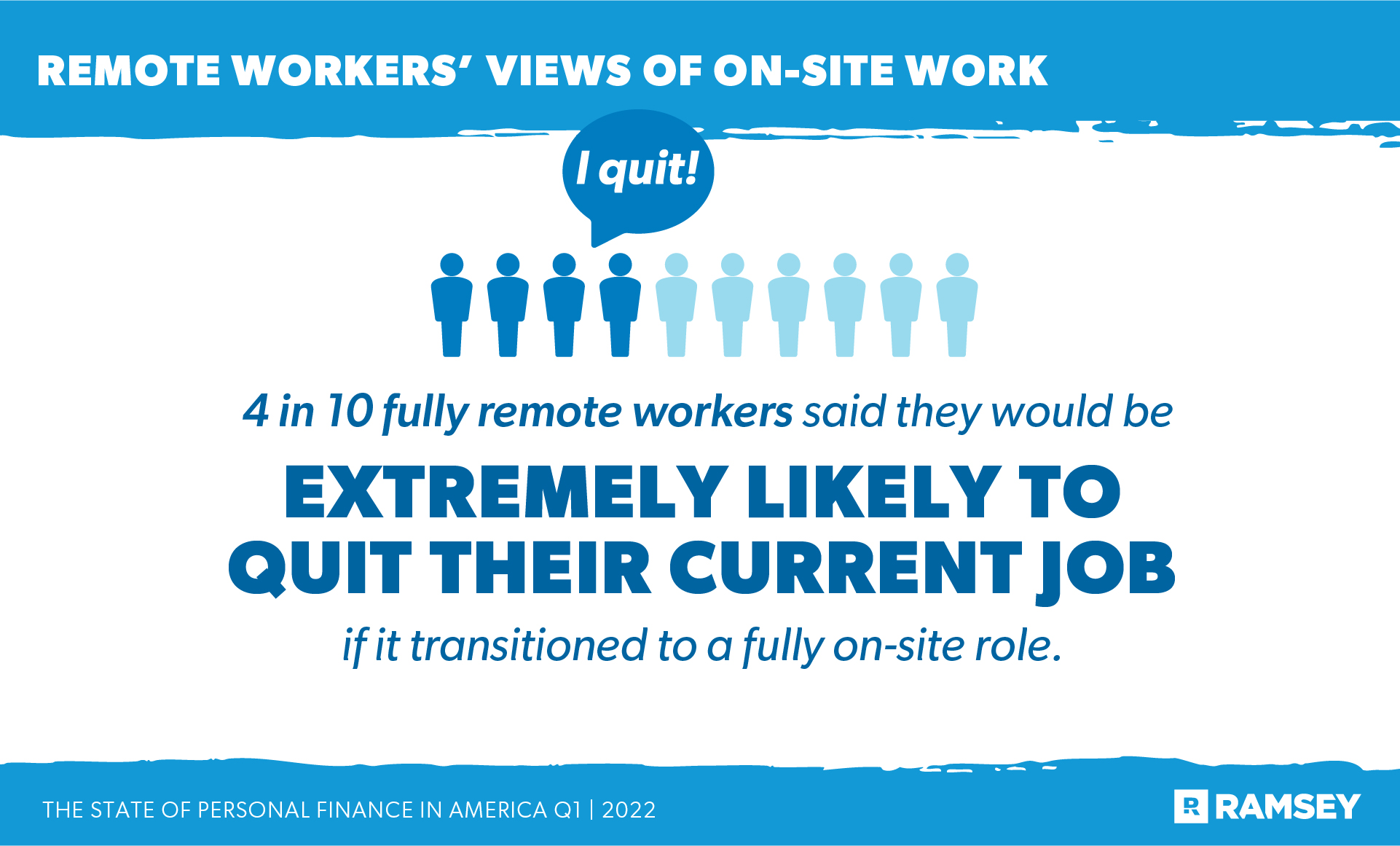 The remote working trend has also influenced the real estate market, as job location is now less of a factor when people are deciding where to live. Almost half (44%) said the ability to work remotely has impacted their decision about where to live, and over one-third (37%) said they moved away from where their job was based because of their ability to work from home. 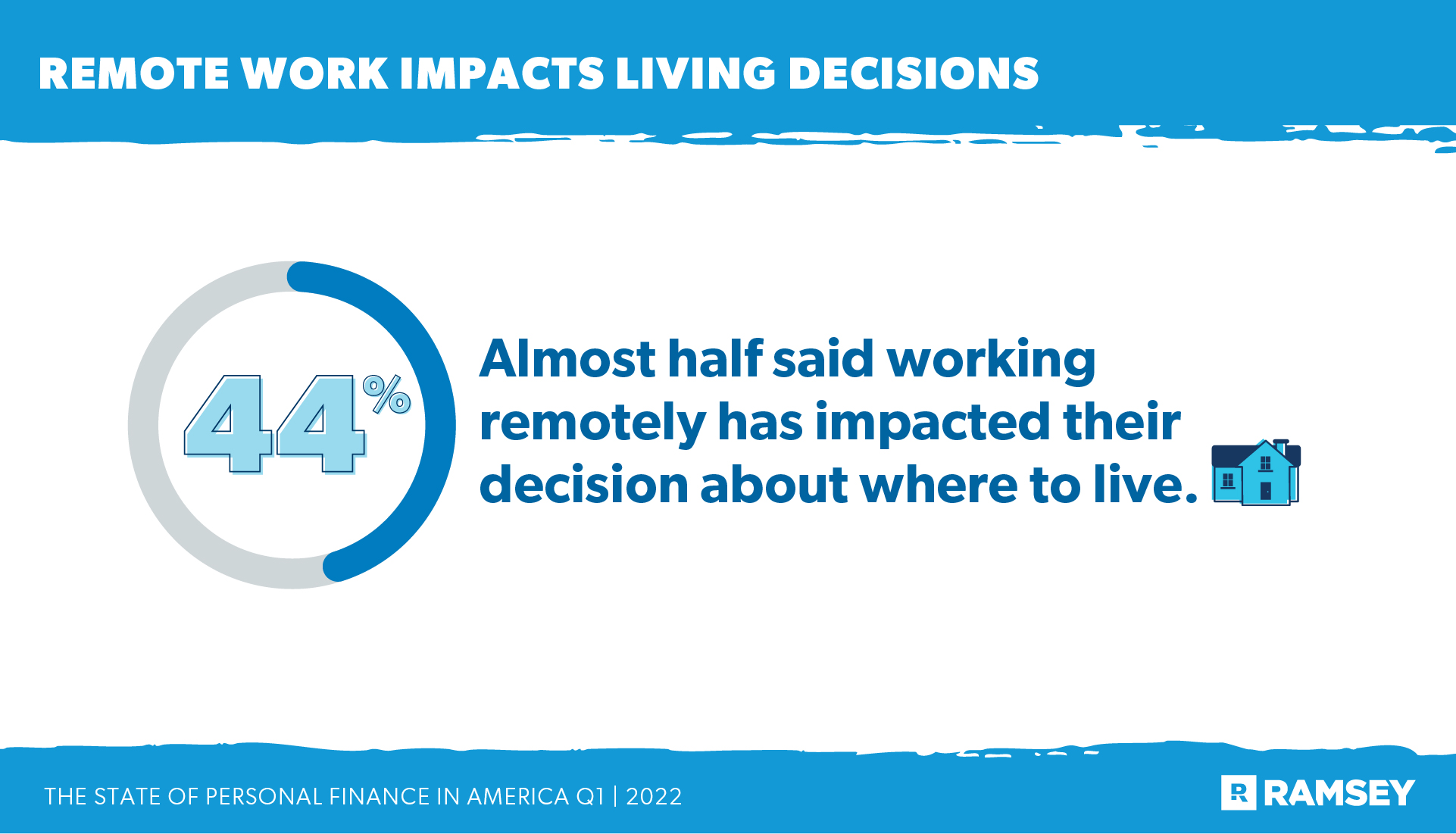 The State of Personal Finance in America is loaded with uncertainty. Inflation has cast a big shadow over everything—making consumers nervous on many financial fronts, like grocery shopping and vacation planning.

From the job market to real estate and student loans, a big cloud of mystery hangs in the air, with most consumers hunkering down and adjusting their spending accordingly. But despite a continued rise in inflation, there is still only slightly less spending on non-essentials.

The State of Personal Finance study is a quarterly research study conducted by Ramsey Solutions with 1,001 U.S. adults to gain an understanding of the personal finance behaviors and attitudes of Americans. The nationally representative sample was fielded from March 28 to April 5, 2022, using a third-party research panel.