As Americans regained some normalcy over the summer with easing restrictions, new research finds people are feeling cautiously optimistic about their financial situation. A lot of Americans feel like they’re better off financially than they were this time last year, but they’re still proceeding with caution before they ramp up their spending. The latest quarterly release of The State of Personal Finance study from Ramsey Solutions digs into these issues as well as the impact of inflation on Americans’ household finances, confusion around child tax credit payments, and concerns about a booming seller’s real estate market.

Many Have Major Purchases Planned, but Still Cautious With Spending

Many Americans are beginning to feel the economy is on the mend, and after a long season of uncertainty and restraint, consumers are ready to cautiously return to more normal spending patterns. Nearly six in 10 say that now that many parts of the country are returning to pre-pandemic life, they are ready to spend money to treat themselves. In fact, 63% have a big ticket or major purchase planned for the next three months. Not surprisingly, summer travel tops that list of upcoming big spending. More than one-quarter (27%) plan to spend money on a vacation in the next three months. Millennials especially plan to increase their travel spending this summer, with 45% of those planning a summer vacation saying they will spend more this year than last year on those trips. Comparatively, only one-third of Gen X and 29% of Boomers plan to spend more on summer vacations than they did last year.

But Americans haven’t forgotten the money lessons they learned during the COVID-19 pandemic. Many Americans who reined in spending and ratcheted up savings to ride out the pandemic say some of those habits are here to stay. In fact, three in four say they plan to make some of the spending changes they made during the pandemic permanent. And 82% say that even though many things are returning to normal, they are still being very cautious with their spending. 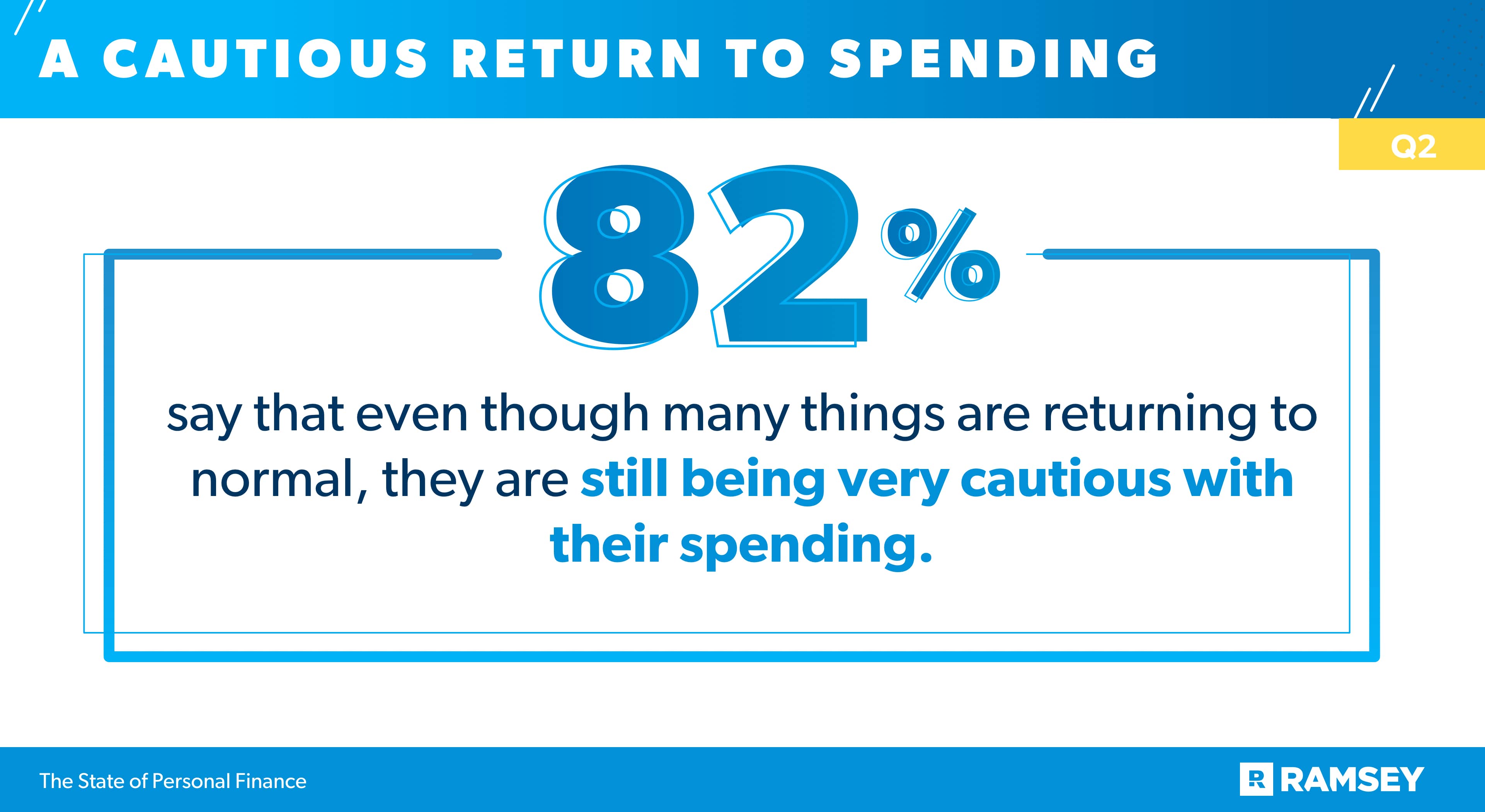 This hesitancy to spend has carried over into other financial decisions as well. Recent changes to the child tax credit allow eligible parents to receive half of their tax credit in monthly payments between July and December of this year. Parents can receive monthly payments up to $250 per qualifying child ages six to 17 and $300 a month per child under age six. Parents claim the rest of their credit amount when they file their 2021 taxes in 2022. But a majority of the parents who qualify for the monthly payments are wary about spending the money now. 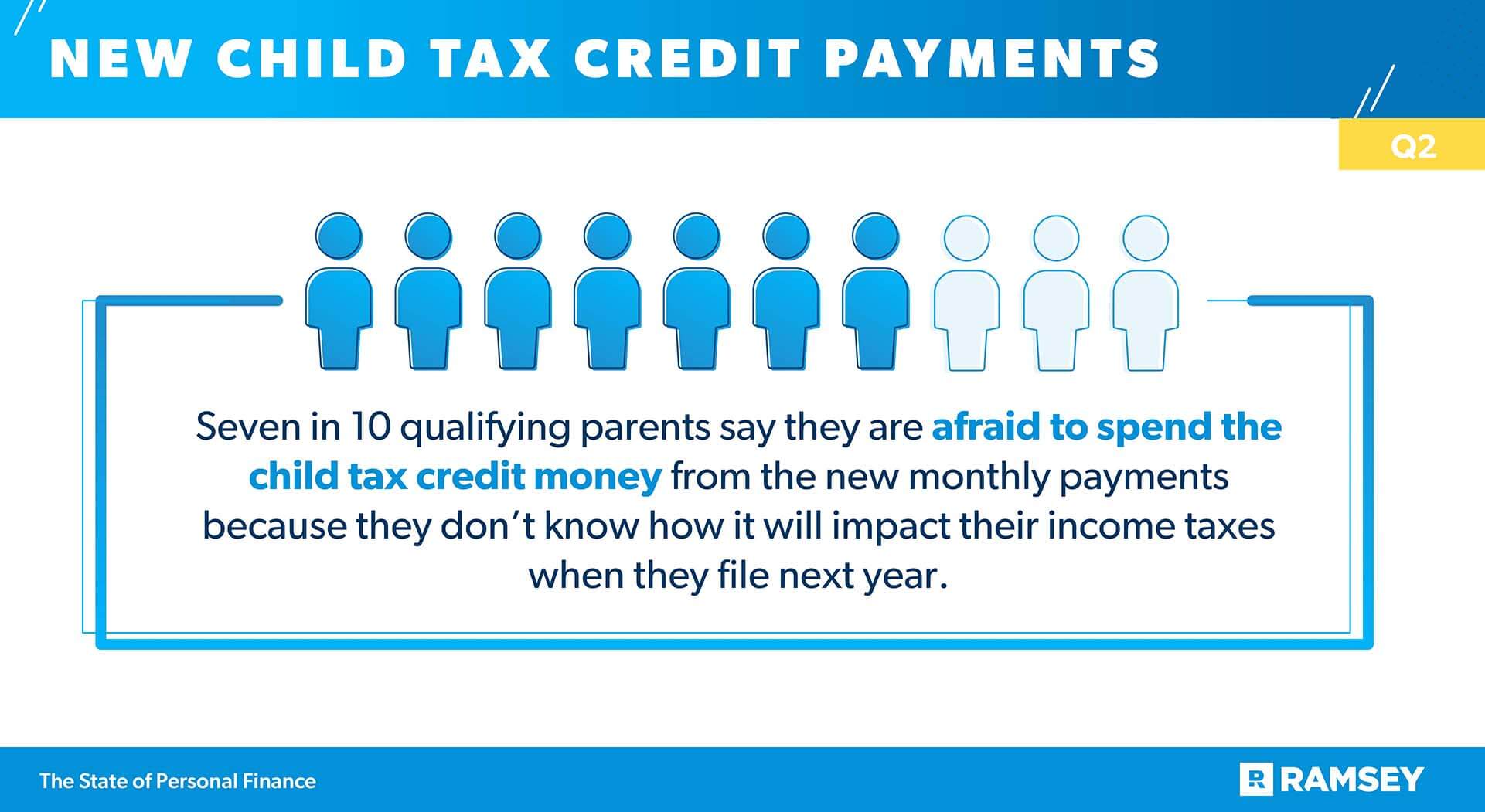 While consumers are cautiously optimistic about the economy and their spending, many shoppers have noticed their money doesn’t seem to go as far. Eight in 10 of those surveyed say they don’t feel like their money buys as much as it used to. And three in four say they have noticed higher prices in the last three months for the things they normally buy.

As the value of their dollars shrink, many consumers are changing their buying habits. Shoppers’ top solution to combat higher prices was to seek out sales or coupons before they purchased items (38%). One-third (32%) told us they have purchased less than they normally would because of higher prices, and 29% said they delayed a purchase because of the inflated cost. 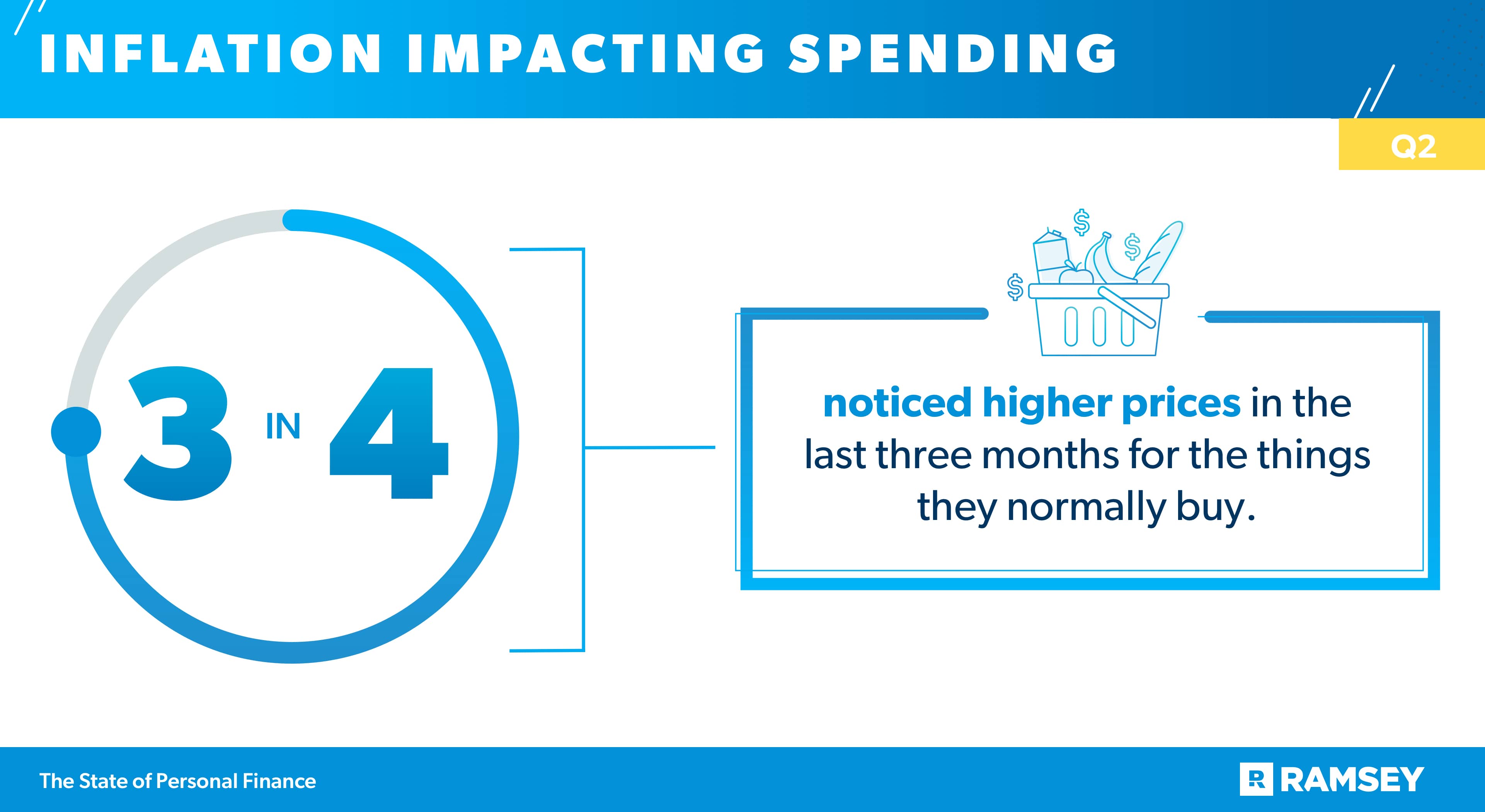 If there’s anywhere higher prices are making waves, it’s in the housing market. Demand is high, and in many markets, the supply can’t keep up. The data from the second quarter’s study shows that for those who bought a house in the last three months, 60% report paying more than the asking price for the house. And for those planning to buy soon, these real estate trends are generating concern. An overwhelming majority (80%) say they are concerned they won’t be able to compete because the market is so hot in their area. And three in four are concerned they won’t be able to find a home in their budget.

Even more concerning than budget constraints and competition are the tactics many home buyers are adopting in order to compete. Three in four of those who are planning to buy a home in the next three months said they would be willing to waive the home inspection and appraisal to make their offers more competitive. That decision for short-term gain could leave home buyers open to long-term risk as they struggle to navigate the demanding housing market this summer. 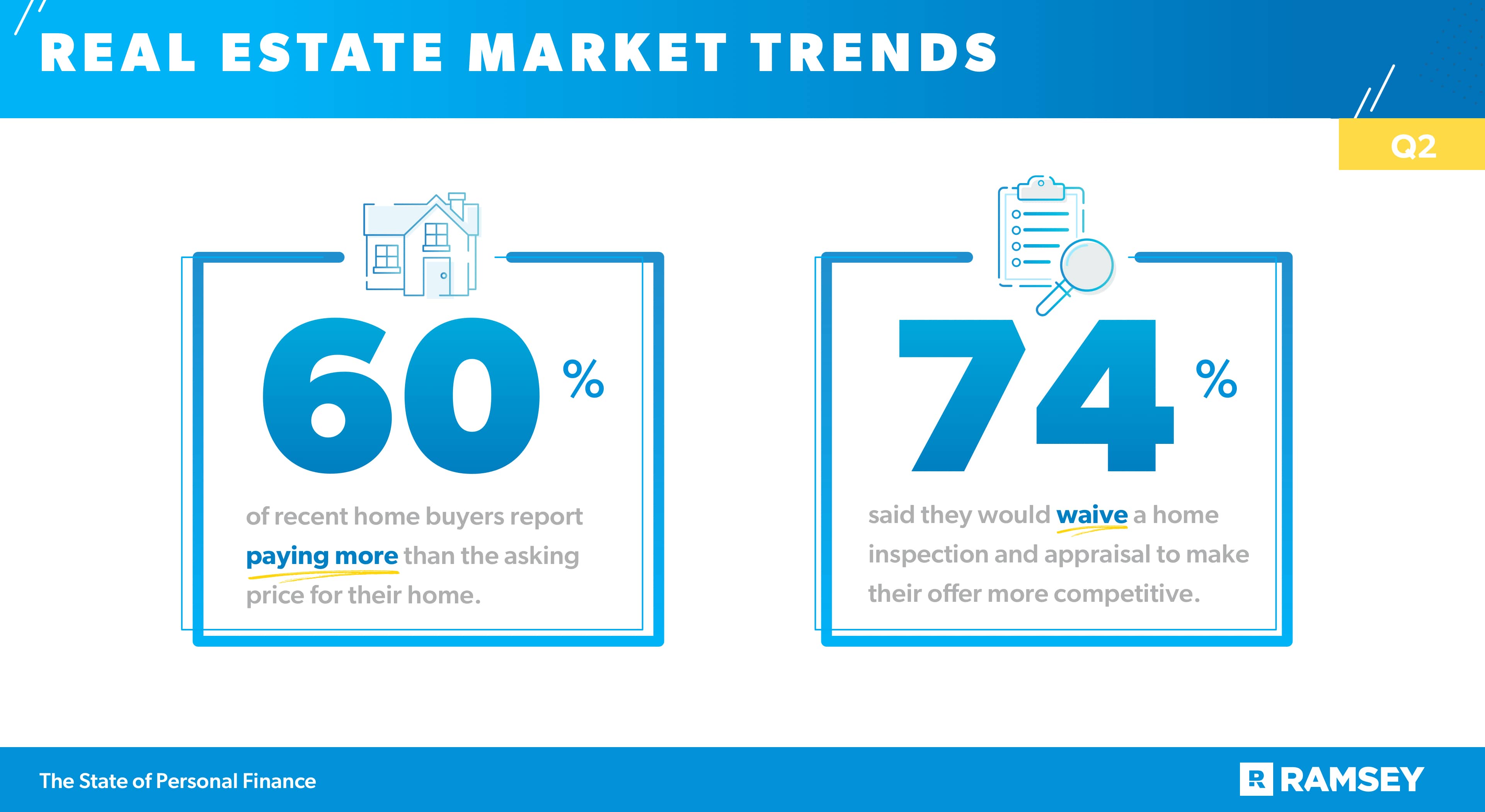 Results from the Q2 study show that newer types of investing, including new investing products like cyptocurrency and new ways to invest like robo-advising are catching on, especially with younger investors. Sixteen percent (16%) of those who are currently investing have invested in cryptocurrency. Millennial investors have embraced the trend more than other age groups, with 27% investing in some form of cryptocurrency, compared to 15% of Gen X investors and only 5% of Boomer investors. 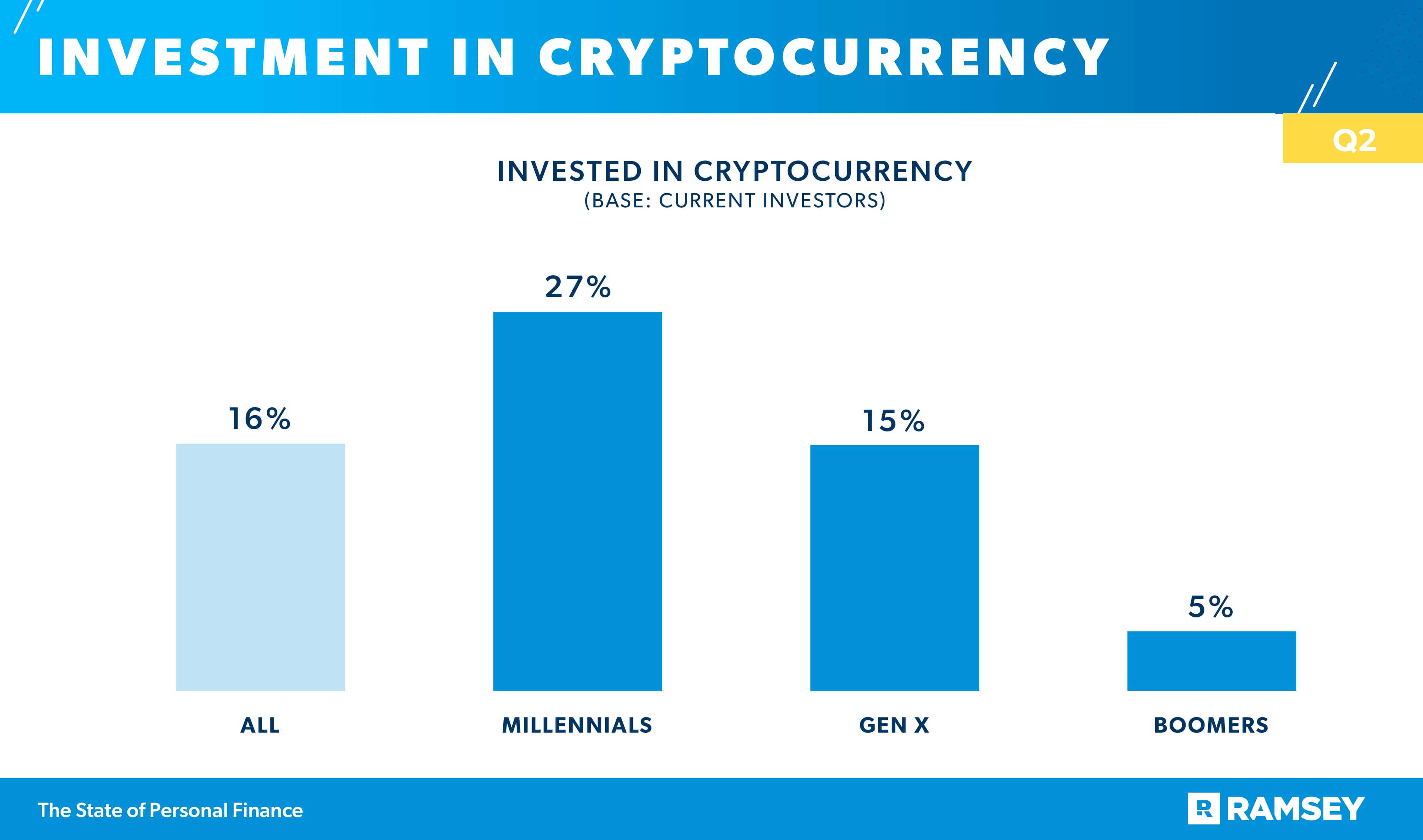 Whether it’s planning a big purchase, deciding how cautious to be with post-pandemic spending, or deciding how to handle child tax credits, money decisions can be tricky for married couples who are not on the same page about their finances.

Among those who are married, 41% say they often fight with their spouse when they talk about money. 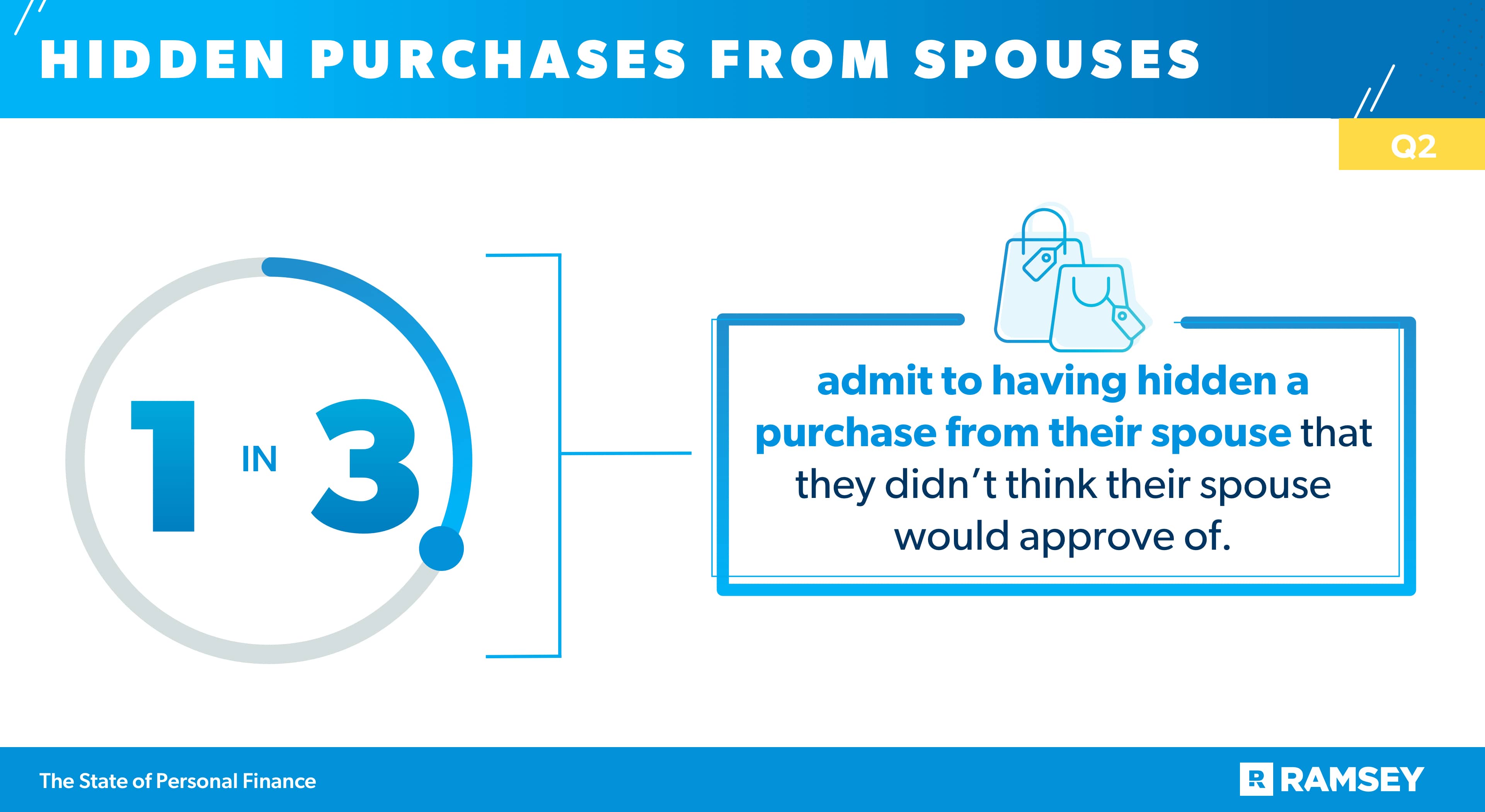 While 37% report that their personal finances are better off now compared to this time last year, with only 18% saying they are worse off year over year, many Americans are feeling better headed into the second half of the year. However, as the latest data from Q2 shows, Americans are still navigating the changes that affect their household finances, including child tax credits, inflation, housing concerns and a cautious attitude toward spending.

The State of Personal Finance Study is a quarterly research study conducted by Ramsey Solutions with 1,004 U.S. adults to gain an understanding of the personal finance behaviors and attitudes of Americans. The nationally representative sample was fielded June 22, 2021, to June 29, 2021, using a third-party research panel.